My grandmother’s name was Eveline. I was sure of that. I was so sure that I gave my daughter the middle name Eveline. I pronounced it ev e lin.

I knew my grandmother’s name was spelled Eveline because that’s the way she always signed her name. I assumed this was an alternate spelling for Evelyn and was therefore pronounced ev-e-lin. Even though I lived in the same house with her as a small child, I missed hearing the distinction between ev-e-lin and ev-e-leen. It wasn’t that long ago that I learned of my mistake from my mom. As a little kid, the only pronunciation that mattered to me was gram-mah. 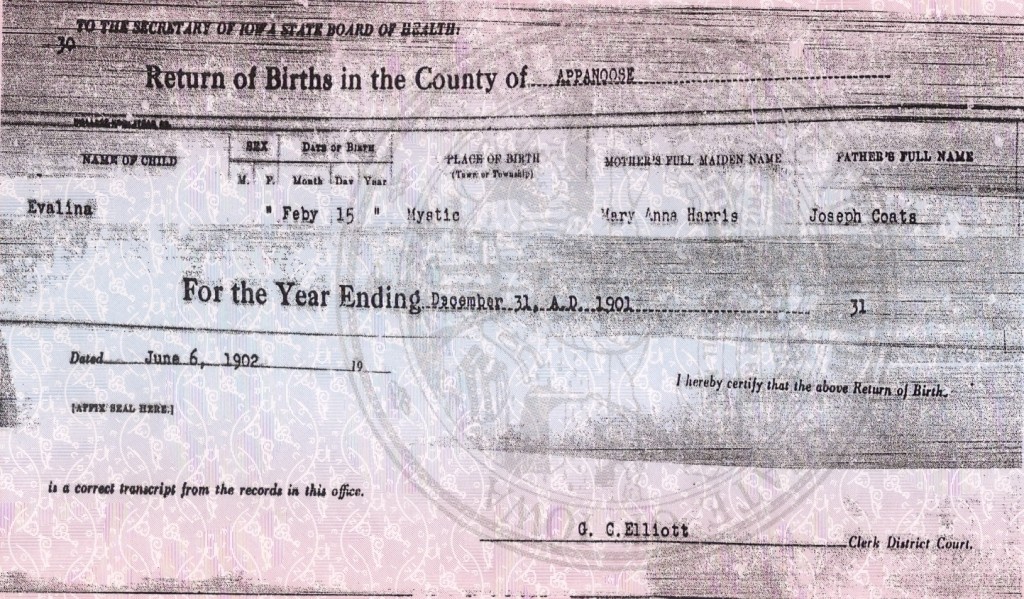 The name on my grandmother’s birth certificate is Evalina. I had not seen this spelling before and thought it was a mistake. Her father’s last name is misspelled as Coats instead of Coates and her mother’s name is documented as Mary Anna instead of Mary Ann, so I chalked it up to error. 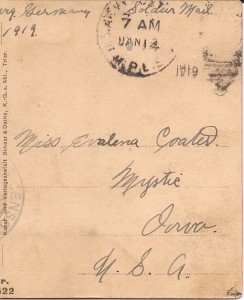 I later found a post card sent to Eveline from her older brother John in 1919 which suggests that the birth certificate is correct. John, however, did not dot the i so the spelling looks to be Evalena.

I received a copy of the record of births page from a Coates’ family Bible – this would surely settle the matter. After all, one of her parent’s probably wrote in the information and would have written her name as they intended it to be spelled.

And so we have one more spelling: Evelina (different from the EvaIina on the birth certificate) – but clearly with an a on the end. Well – except that it looks like someone went back over it and tried to change the a to an e.

I think my grandmother’s given name originally ended in a and that she later changed that last letter to e. I don’t know when or why, but she changed it by the time she was 16. There is a family story that my grandfather (her husband Thomas Hoskins) influenced her to change her name to Eveline because he liked it better. If this is true, his influence began several years before they were married.

Ev-e-LEEN   Ev-e-LEEN  Ev-e-LEEN  (just practicing)
********
* Can anyone fill in more details about Grandma’s name change?
* Transcription of birth certificate below:

I hereby certify that the above Return of Birth is a correct transcript from the records in this office.
G. C. Elliott   Clerk District Court