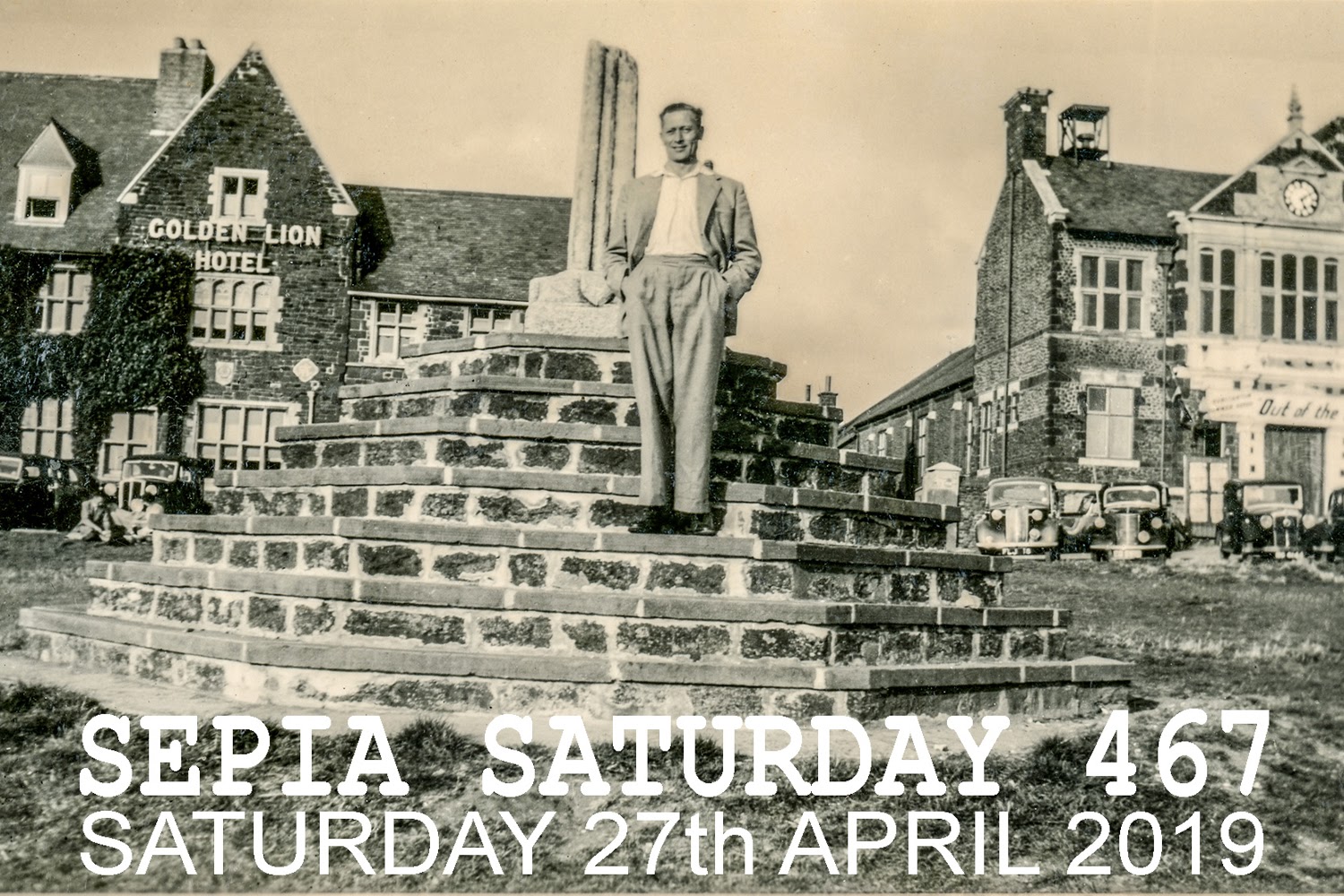 This week’s prompt photo prompted me to return to my great uncle Fred M. Webber. He has his own landing page here because I keep adding to his story.  As I have researched Uncle Fred, I have found a few surprises along the way. Today, though, a look back at his high school days. I’m guessing that the photo I chose in response to the prompt image may have been from his college days based on his cool demeanor and nice hat. 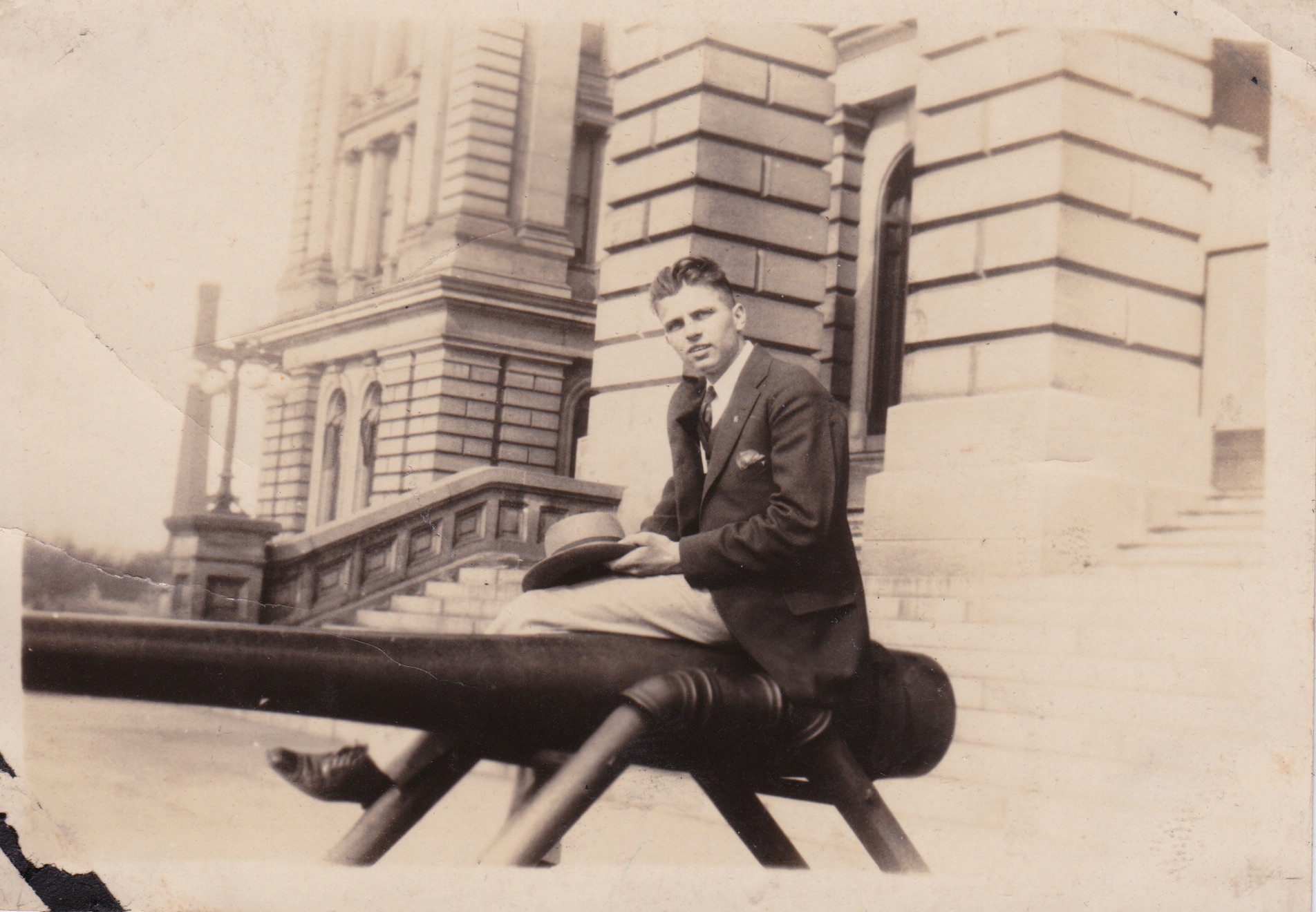 Fred M. Webber attended Fairfield High School in Fairfield, IA, where he was a member of the debate team.

As the fifth of nine children in the family, I wonder if Fred’s debating skills developed at an early age and how those debating skills worked out at home once he really mastered debate in high school.

The first documentation I located of Fred’s participation on the debate team was during his Junior year of high school. The article notes that Fred was chosen for the Big Nine League team from Fairfield High, arguing the negative on the question: “Resolved, that the United States should join the other nations in a world court.”

In March, the team met their rival team from Davenport, with the Fairfield team of three arguing the affirmative on the same question. A newspaper clipping announcing the upcoming debate noted that Fairfield had won 14 of 15 debates during the previous two years. Unfortunately, Fairfield lost this one, bringing their score to 14 of 16. Newspapers and available yearbooks on ancestry.com let me down and I don’t know how the year ended for the debate team, but Fred M. Webber came in second place in the Big Nine League state extemporaneous speaking contest that year. 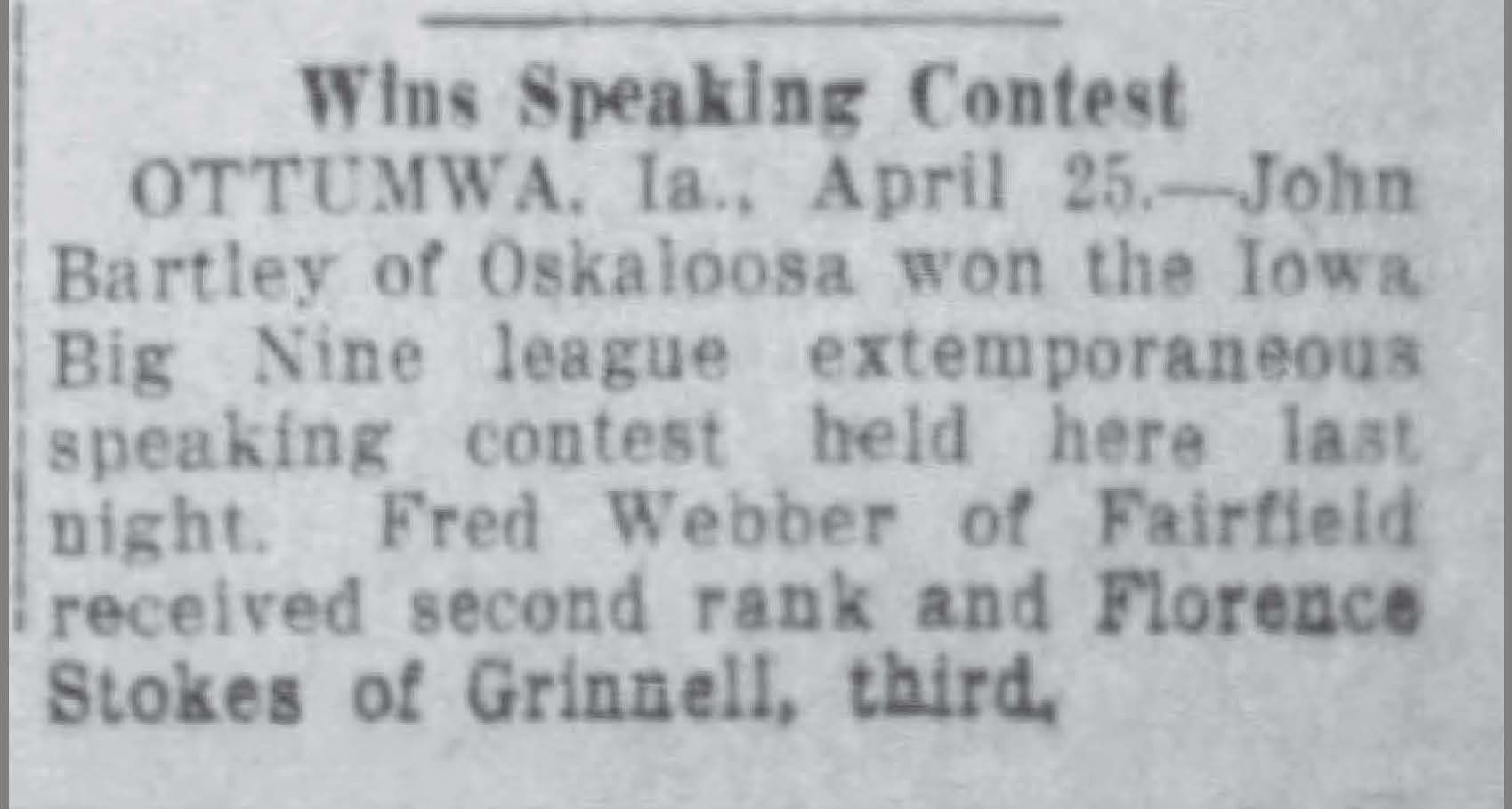 Fred’s Senior year of high school was a big one for the debate team. March 3rd found the Fairfield team winning a debate against the Montezuma team on the topic of government vs. local control of mines. They now had eight victories under their belts, having argued both sides of that question. On March 23rd, the Fairfield team beat the Davenport team in what the Davenport newspaper deemed a repeat “victory of decade,” this time arguing the affirmative side of the question: “Resolved, that the Japanese Exclusion Act should be repealed in favor of a gentleman’s agreement.” 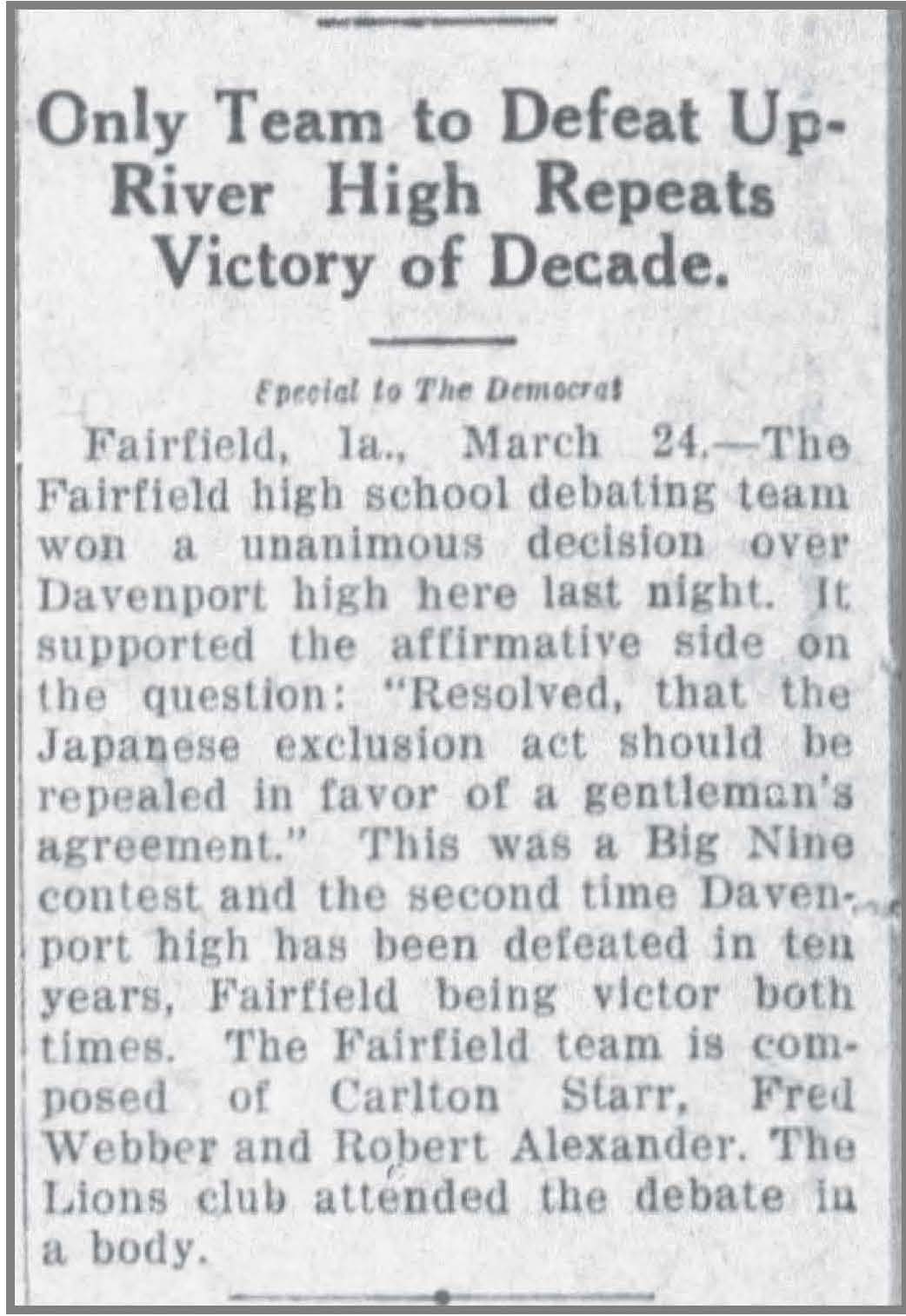 An article from March 26th is amusingly descriptive of the anticipated debate against Iowa City. 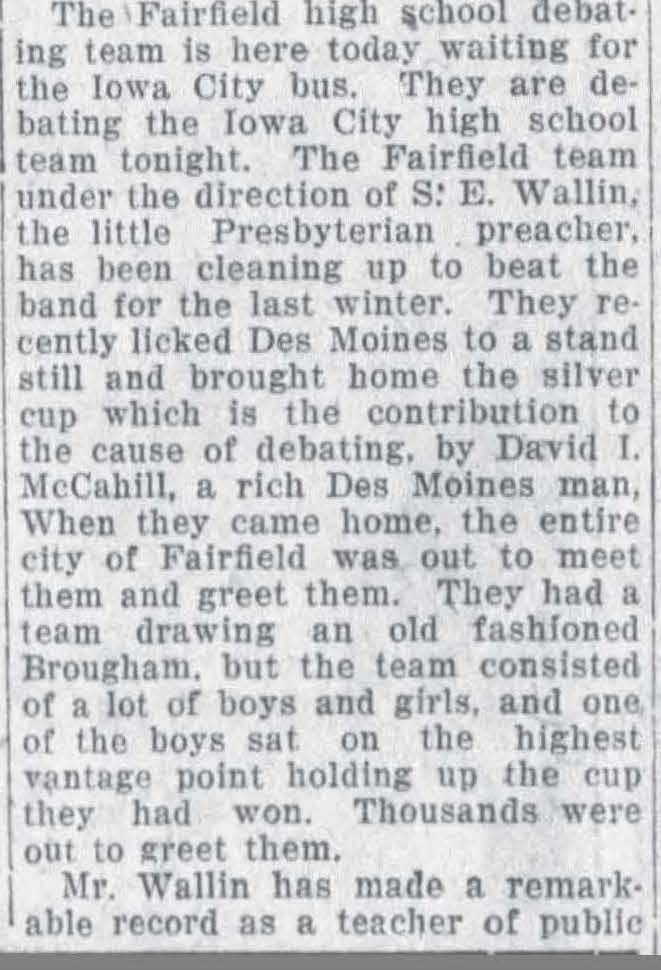 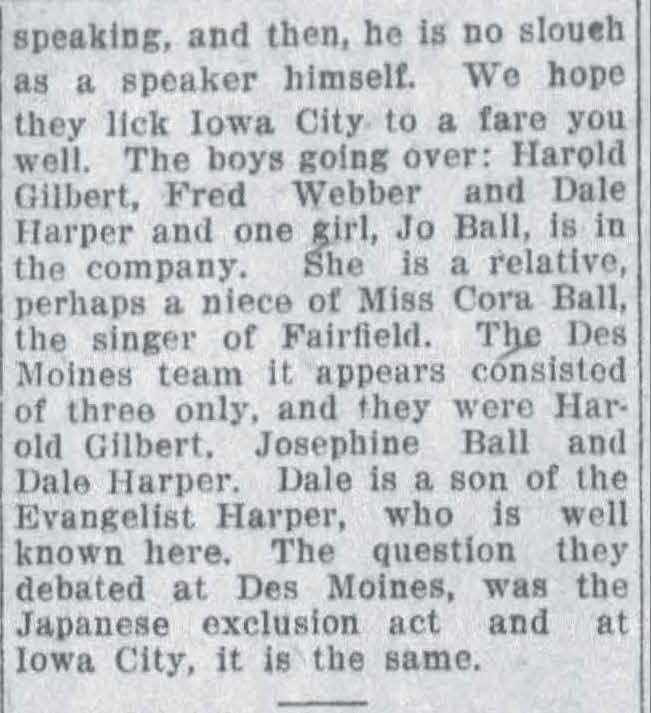 This looks like a photo related to the match with the Iowa City team. 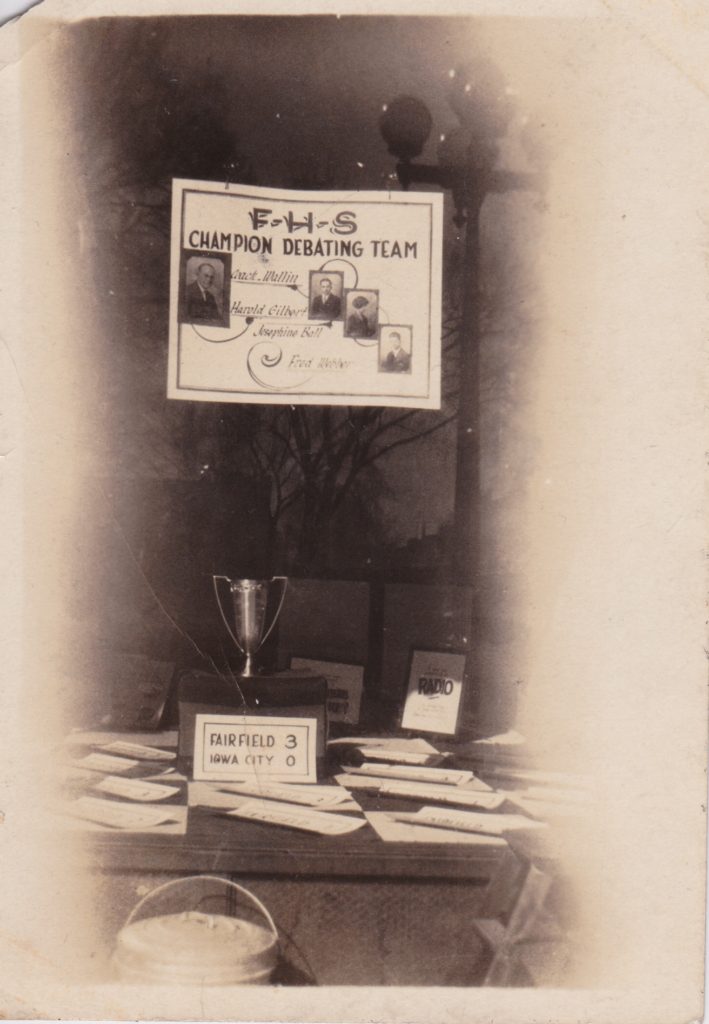 And since these undated photos were in my grandmother’s scrapbook on the same page as the photo above, I’ll assume this is the team with the trophy they won that day. Everyone got the chance for a photo holding the trophy on the steps of Fairfield High School. 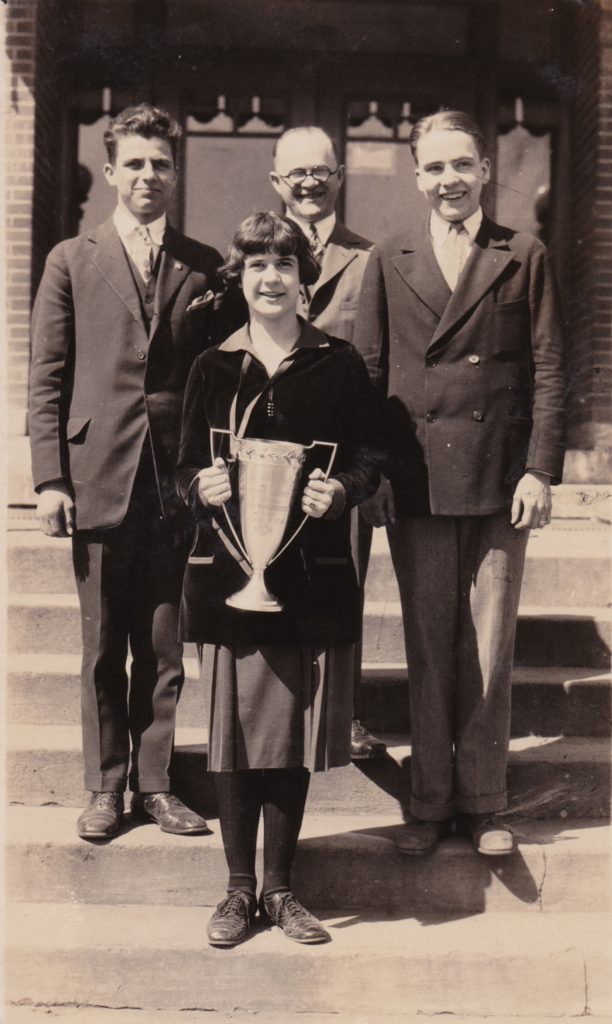 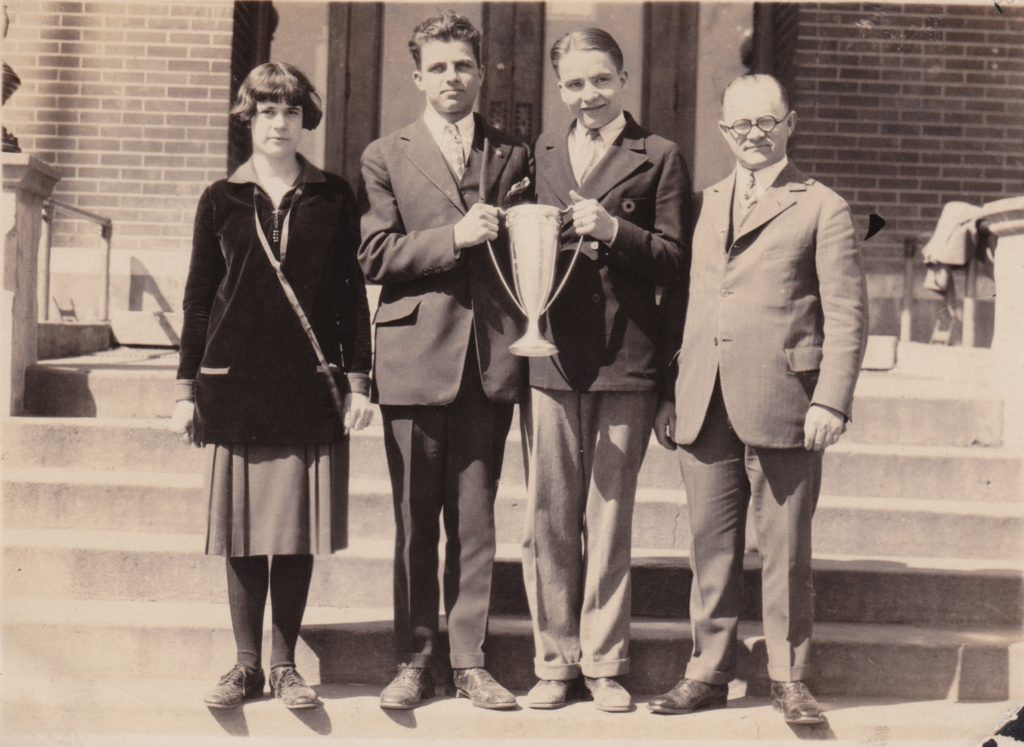 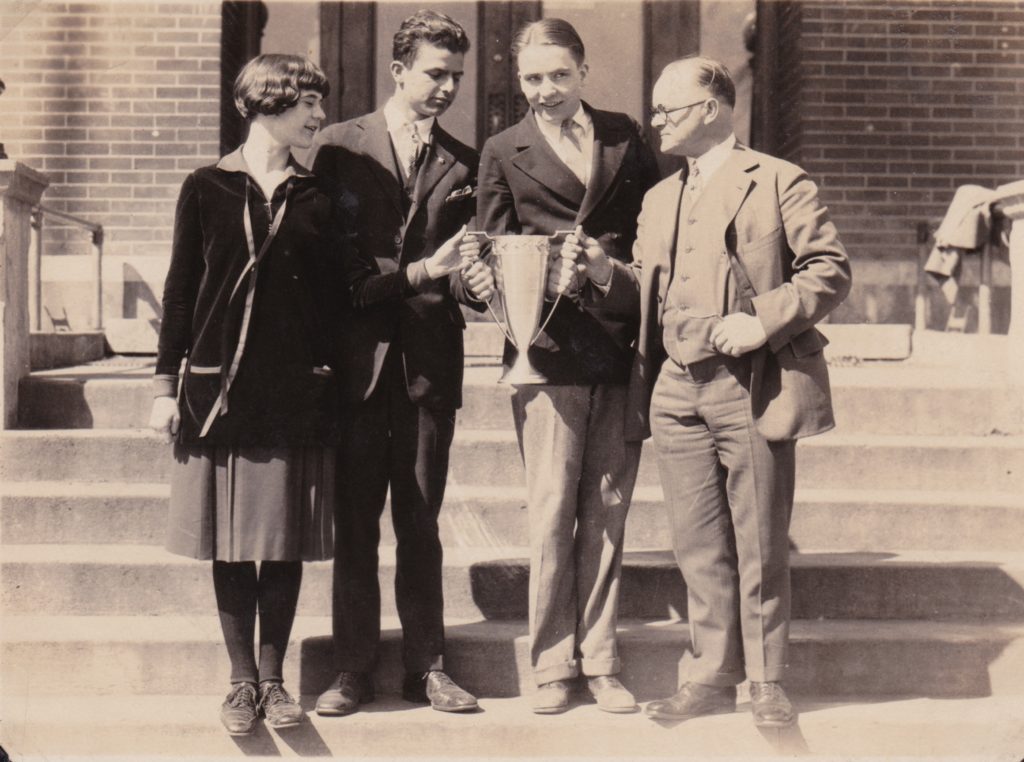 The 1926 edition of The Quill, Fairfield High School’s yearbook, offered this take on the debate team in the Broughgam mentioned in the article above about their win over Des Moines. The team of boys and girls pulling the carriage replaced by mules in the collage. The photo collage is printed sideways, but I’ll rotate it so you don’t have to rotate your head. Fred’s head is in the back seat with their coach. (Click to enlarge.) 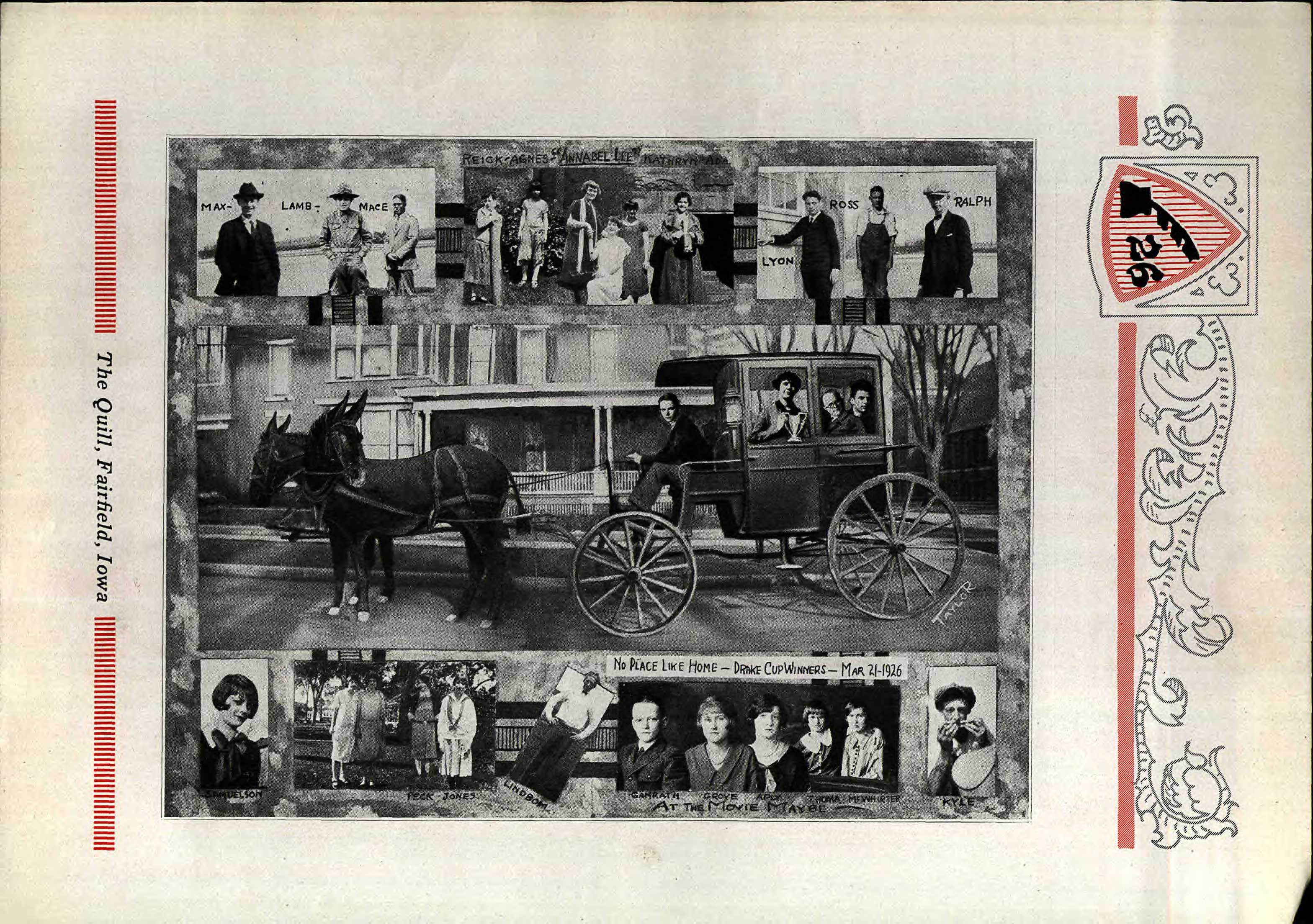 On March 30, the Fairfield team won the Iowa Eastern Title, again on the topic of mines. On Friday, April 30th, the Fairfield debate team met the Rock Valley team in Iowa City for the state championship. A radio was set up in the Fairfield High School auditorium so that everyone could hear the live broadcast of the debate. They were not disappointed.

Monday found the championship debate team – Fred Webber, Josephine Ball, and Harold Gilbert, celebrated by the residents of Fairfield. The band led the student body and faculty in a march from the school to Central Park. 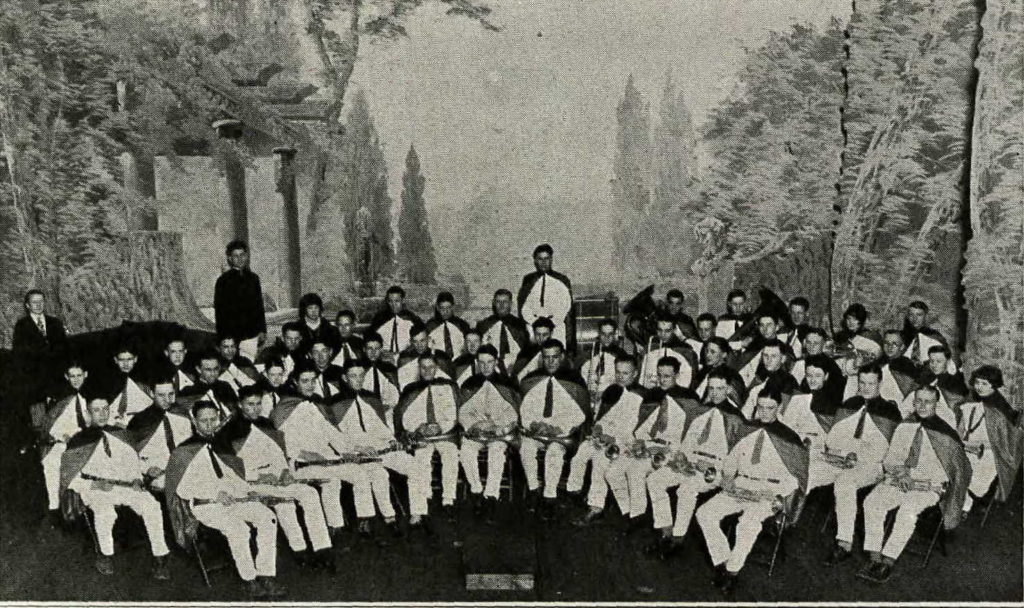 There, the band escorted the debate team up to the bandstand where they were met by a committee of citizens representing the school board, city government, merchants and ministers. 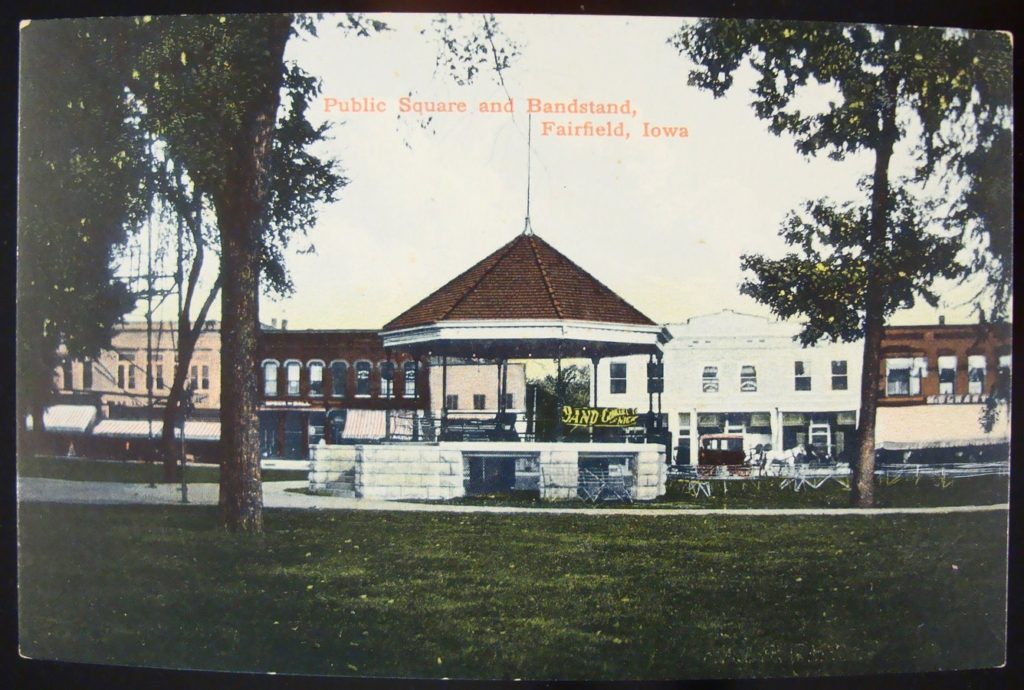 One of Fred’s grandchildren is in possession of a trophy presented by the debate coach to Fred. 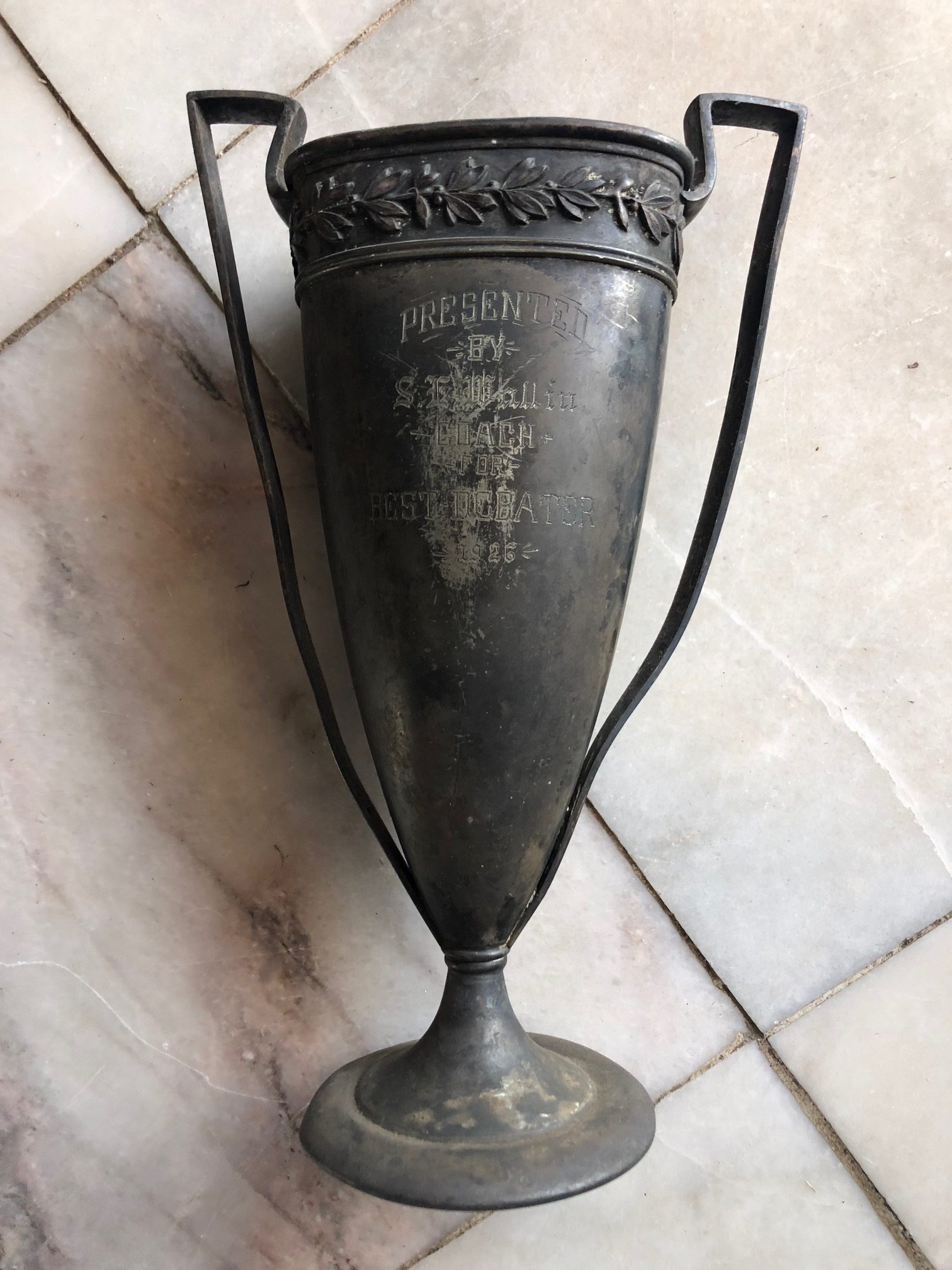 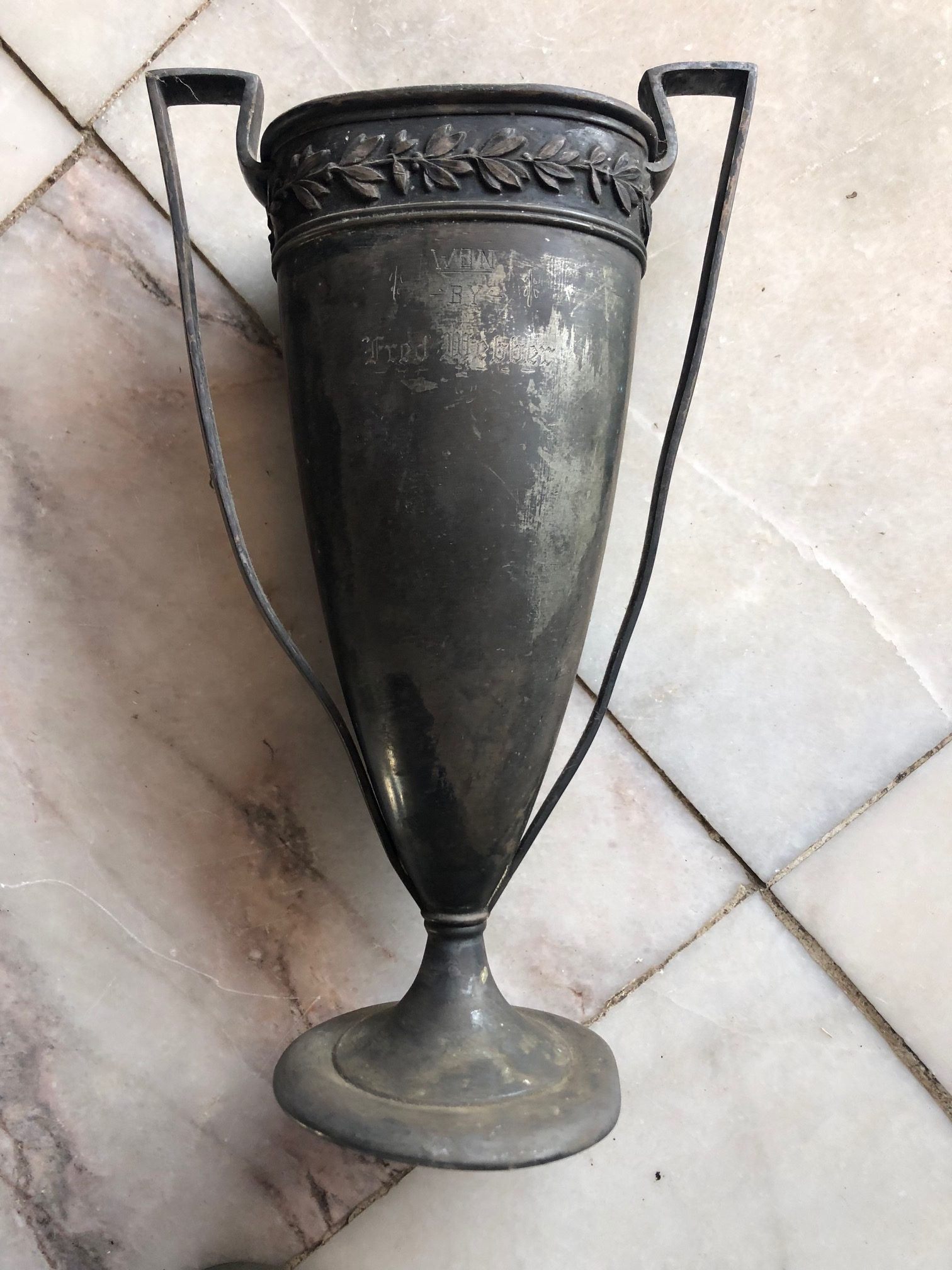 The yearbook offered this tribute to their state champion debate team. Fred and his teammates were offered scholarships to the University of Iowa. 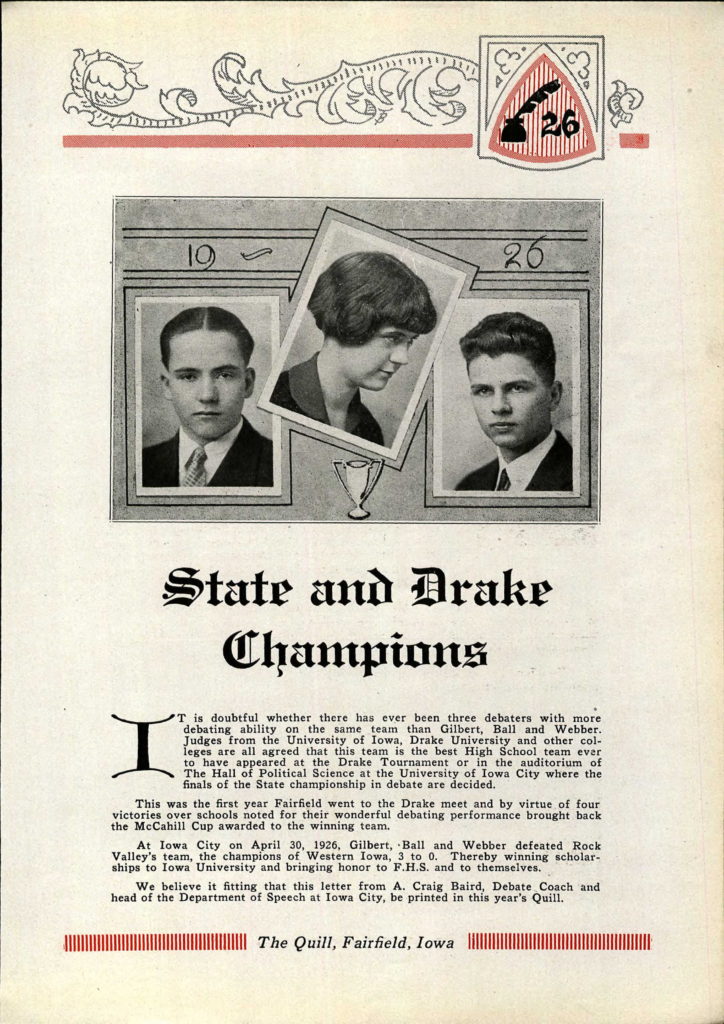 And the following page includes a letter from from the Debate Coach at the University of Iowa. 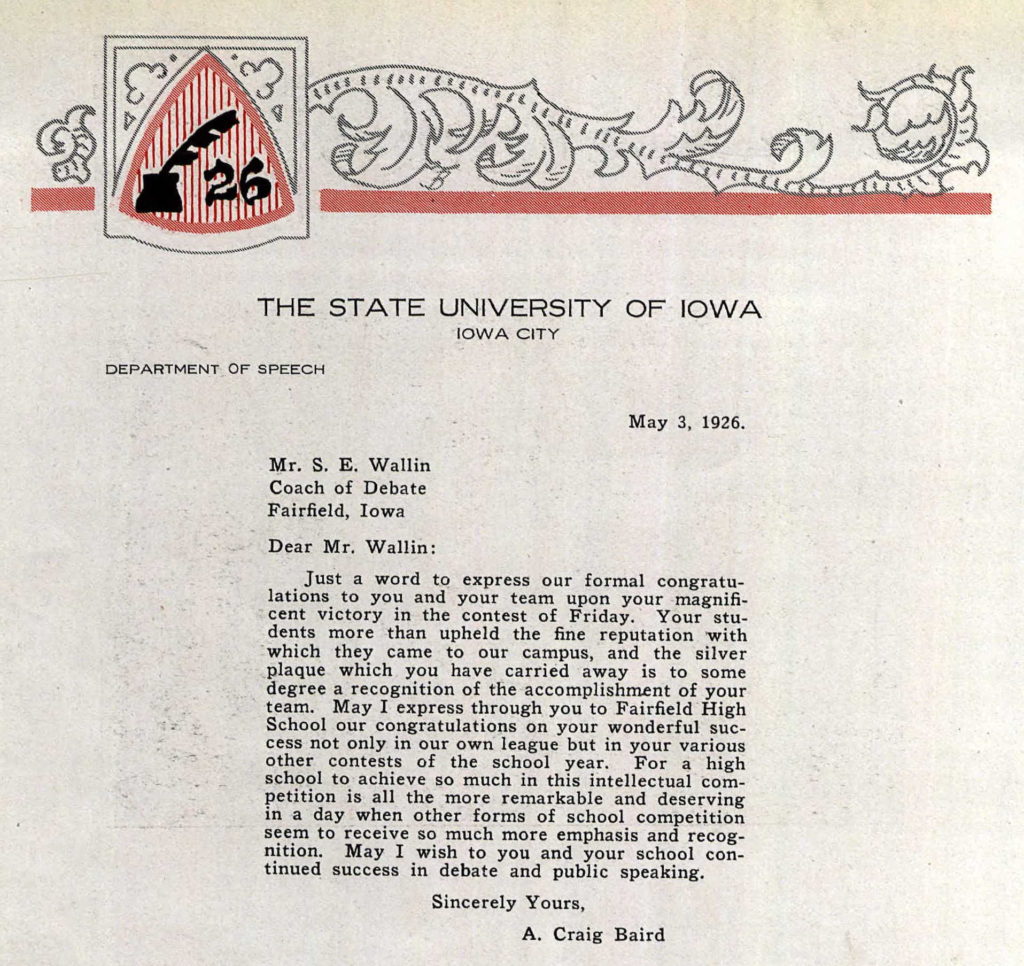 Fred accepted that scholarship. It was his ticket to the University, something neither he nor his family could have afforded. Fred, his parents, and siblings who were still in the home moved to Iowa City so that Fred could attend the University. The scholarship must not have included room and board. I wonder what kind of debate went on within the family about moving?

I think it is safe to say that Fred’s participation in high school debate played a significant role in the trajectory of his life.

When I started this post, I thought I’d get to include more of the fun things I found in his high school yearbook and his college days, but those will have to wait for another day.

Take the stairs, if you are able, and visit the other participants in Sepia Saturday.