My attempt to share stories for each letter of the alphabet featuring our life in Austin B.C. (Before Children) 1975-1985. The 70s were a long time ago. 26 stories might be a stretch for my brain, but I have made it to Q. Computer issues and other things have delayed writing and posting for a couple of weeks and now I am behind the Sepia Saturday prompts. Oh well.

Perhaps you have heard of the Dave Brubeck Quartet. 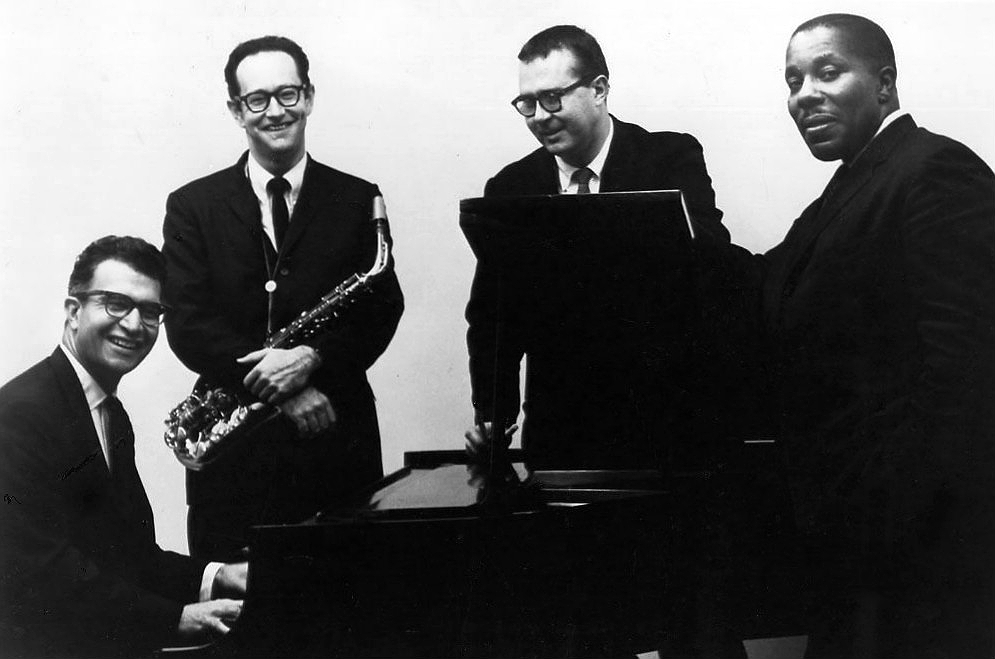 My husband and I were fortunate to see Dave Brubeck in person at First United Methodist Church in Austin in 1983. 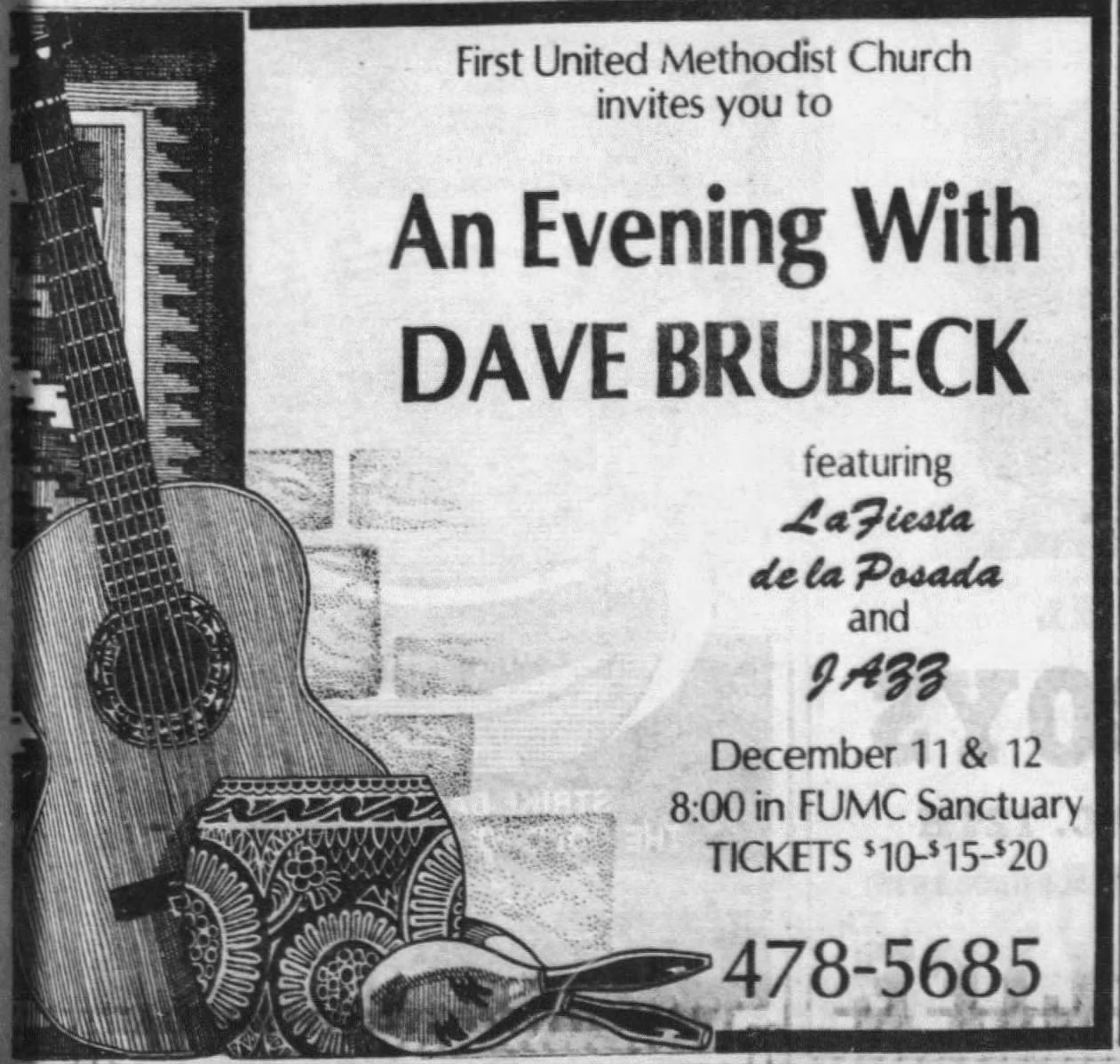 When I chose this topic for the letter Q, I assumed quartet was accurate, but it was a trio. Dave Brubeck and his two sons.

When Dave Brubeck died in 2012, I linked an article on Facebook and noted that I had seen him perform at church. A few of my friends chimed in.

Nancy said: It came about because Lanier Bayliss was our choir director and she wanted to do the La Pasada piece that Brubeck had written. I’m thinking we performed it several times (thus no date on the program) over a weekend with the last performance on a Sunday afternoon. After that performance a group of us went to see “A Tuna Christmas” at the Paramount and I slept through the whole performance!

Mary Faye said: That was a thrilling performance. I was in the choir, too. I remember just one performance, but many, many rehearsals. After we sang the Posada piece Mr. Brubeck played a concert including his hits Take Five and Brandenburg Gate. While we performed and during his performance afterward I was about six feet from him. I was telling a colleague about this the other day and he was incredulous.

Randy: We had both a Saturday and a Sunday concert, along with having Mr. Brubeck accompany us during the Sunday church service. His birthday occurred during the week of our concert, so we had a cake for him, his wife and his sons (the sons accompanied him in concert as well). I remember the whole family being very down to earth and a lot of fun.

I wish I had taken photographs or could have gathered some from friends to add here, but I did not and I have not. So I am left with newspapers to document the event.

A part of the program details the sequence of the performance. Carole Fitzpatrick was the featured soloist in the part of Mary. 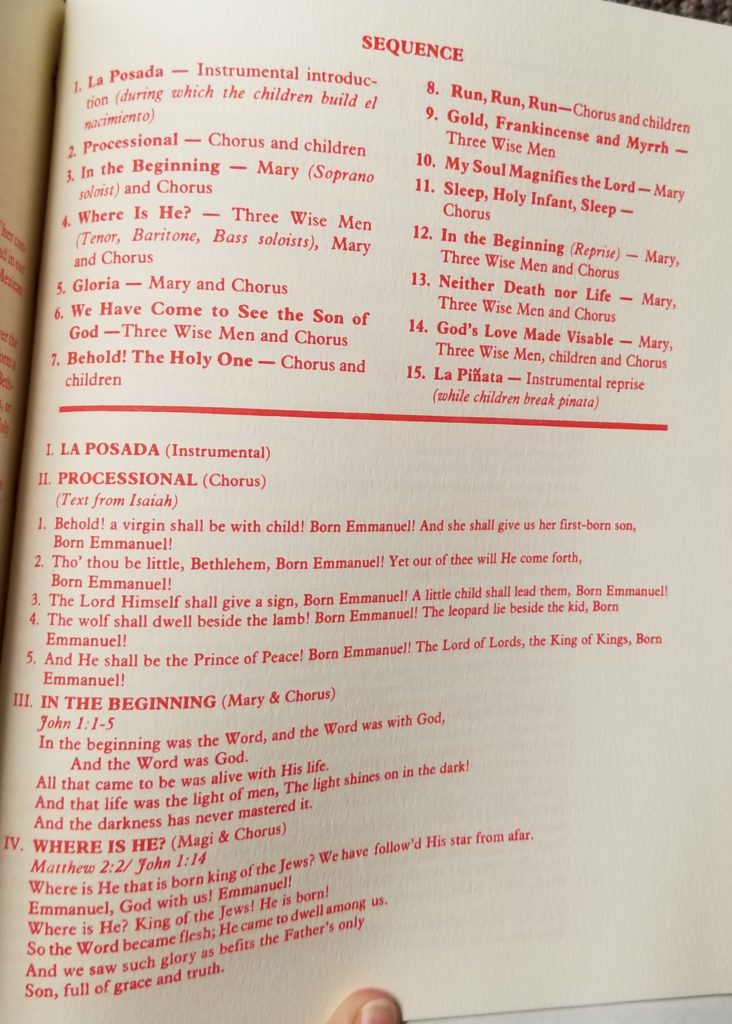 I searched for Carole Fitzpatrick to see where she is now and found her teaching voice at Arizona State University’s Herberger Institute for Design and the Arts School of Music and I also found a few recordings. The featured solos of the Posada were in good hands, or should I say in good voice?

The article above mentions that the church put on summer musicals at the time. The choir loft, alter – everything at the front of the church was covered/removed/transformed into a set for several weeks each summer. The musicals were always fun and entertaining! And I know of at least one couple who met on the set of one of the musicals and have had a long and happy marriage.

While Mr. Brubeck was in town, he made appearances on local TV. 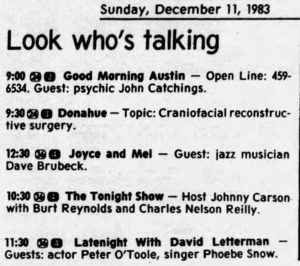 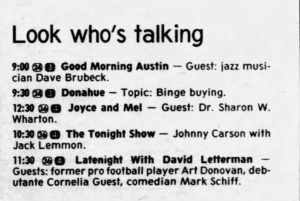 Once again, I wish I had a better memory or that I had kept journals all my life. Actually, I’m not feeling so bad about about my memory after reading the comments of my friends who sang during these performances. Randy got it right – two performances and presence during church Sunday morning.

My snippet of memory is of my husband and I sitting in the north balcony of the church. I remember being so moved by the music – feeling the divine, not just in the “religious” music (the Posada), but in the secular jazz as well. I turned to my husband and asked if he didn’t feel it. Although he enjoyed the music very much, he did not find it a spiritual moment. Well, that’s me for you.

I couldn’t decide between the two videos below. They are long, but I thought you might like an introduction to Fiesta de la Posada if it is unfamiliar to you. The first is a 1983 concert at the Wright Center Concert Hall, including “Fiesta de la Posada” and movements from “The Light in the Wilderness,” featuring the Dave Brubeck Quartet and choral and instrumental performers. This occurred about a month before the performance at FUMC.

This second video is a performance in 1975, I think. I haven’t been able to figure out the details of the when and where, but it gives an idea of costuming and set arrangement and children performing. Of course, in our church, there was not a full orchestra, and certainly no pit under the stage.

This is my contribution to Sepia Saturday, featuring the letter Q. 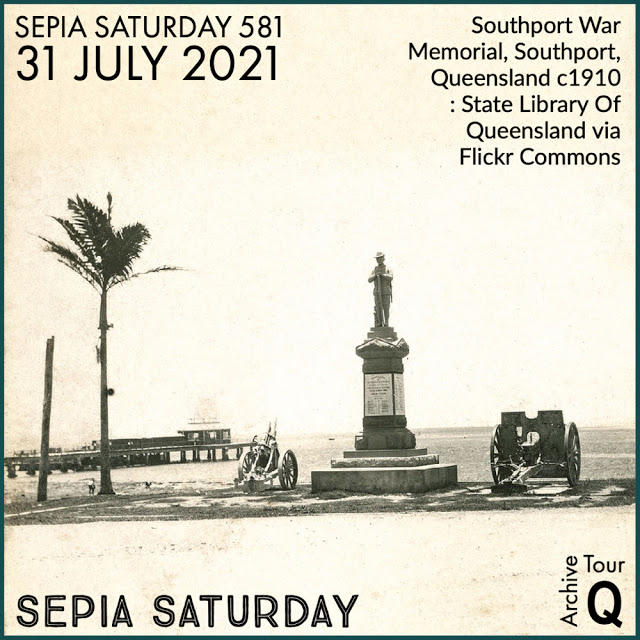 I encourage you to visit other Sepia Saturday participants here.