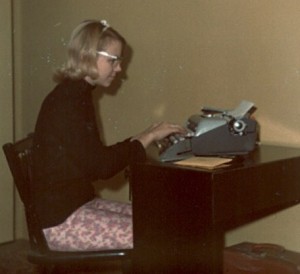 Starting this blog involved learning some new tricks. I’m not very tech savvy; I’m not a writer; and genealogy is a hobby I’ve worked at diligently and happily, but also haphazardly. I still have some new tricks to learn about all three.

As if that weren’t enough, we switched to a Mac this week. Macs are supposed to be intuitive, but my intuition seems to be a little off…

Things disappeared when I hadn’t touched anything. Who knew an unconscious twitch of the finger was a back or forward button?

And did you know that control c followed by control v results in your words being deleted – except for the letter v that you just accidentally typed? I didn’t. I’m having trouble remembering to hit command instead of control. Do you know of a good Mac behaviorist? Each time my finger moves toward the command key I could receive an M&M. Then we could shape my behavior to actually hit the command key to copy. Eventually, I would learn to copy AND paste. And not delete my words unintentionally. Good girl!

iPhoto……  Let’s just say I don’t quite have the hang of it yet. But I have renamed enough “Events” to at least have most of my families in the same vicinity on the screen. And I’ve spent way too much time playing in iPhoto – tagging pictures with the “faces” tool and trying to make the “places” tool work for me. I keep moving that pin, but it insists that my house is downtown. My daughter just told me I don’t have to use iPhoto. I don’t?

Then there is the issue of my genealogy software. I’ve ordered the Mac version. I wonder what new tricks I’ll need to learn to transfer the files? And will it work like the PC version?

We got a new printer too. I haven’t even tried to scan any pictures yet. That will involve saving them in unfamiliar ways to unfamiliar places.

The list of new tricks just keeps getting longer and longer.

Instead of getting into the rhythm of blogging as I had hoped, I am trying to learn some new tricks so I can get back to blogging.