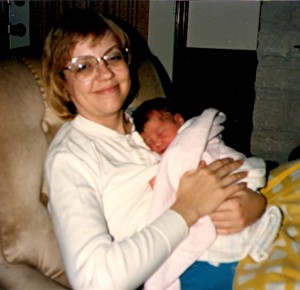 I know. Not an appealing title. But that’s what we called it.

The poem in a previous post brought back memories of a chair I sat in for about six years. Okay, I did get up out of the chair now and then, but some days I felt like I never left that chair. It was the chair where I nursed and held and rocked and read to my three babies.

I must have looked like this picture much of the time….. tired. On second thought, I look pretty good in this picture. It looks like I had bathed. And had on makeup.

Our first baby spit up a lot. When I shared my worry with the pediatrician, he suggested we keep her upright for thirty minutes after a feeding. Putting her in the infant seat didn’t help, so I would sit in the chair, holding her upright for an additional thirty minutes after she nursed. Sometimes even that didn’t work. It seemed like I was always changing my clothes and wiping down the chair. It went on for months. We chose to sacrifice one chair in order to protect the rest of our furniture. Hence the name.

Sitting in the chair, I daydreamed. I solved the problems of the world. I made business plans that would allow me to stay at home and earn money. I nodded off. I smelled sweet baby smells. I smelled spit up. I felt baby heart beats. I perfected my burping technique. I sang lullabies. I watched TV – sometimes watching history unfold. 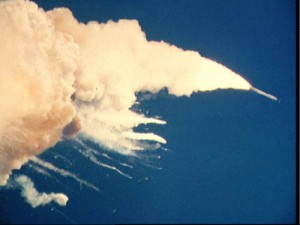 The most memorable for me was January 28, 1986, when the Challenger Space shuttle broke apart after lift off. All day and all night the footage repeated on the television as I nursed, held, and rocked my two-month-old baby. The coverage was non-stop. Christa McAuliffe, the first teacher to venture into space…. her students and family and friends watching proudly and with great excitement and anticipation. It was a sad day to be sitting in the spit-up chair. 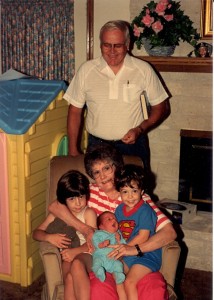 Kids and Grandparents and the Spit-up Chair

We kept the chair for several years after spit-up ceased being a daily occurrence. The chair remained important for rocking, reading, soothing booboos and hurt feelings, singing, watching TV, and posing for pictures.

We no longer have the spit-up chair. But we still have the memories.