When my kids were little, we watched Sesame Street every day. And I subscribed to Sesame Street magazine. I wish I still had a complete issue around here to help me remember the kinds of articles and activities between the covers – many that we probably did together.

One thing I do remember is the “Kids in the Kitchen” section. Here’s a page I saved from the July/August 1989 issue. At the time, I had a three-year-old and a 6-month-old. Of course, when my kids were little, they didn’t like potato salad or tomatoes or cucumbers, so I came up with my own red and white foods to fill in the stripes. I have used strawberries, sliced hot dogs, red grapes, cauliflower, white cheese, and cherry tomatoes. I wonder what else? Oh – apples! They serve double duty. You can use them for white or red stripes. One thing that always remained the same was the upper left-hand corner filled with blueberries and topped with some miniature marshmallows. I use an open Tupperware sandwich container to keep the berries in a square. I prefer that everything be finger food, but use your imagination and let me know how your patriotic platter turns out. 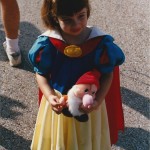 Oh my. I just went looking for a picture from July 4, 1989 and I found one. I started to add the story behind it here, but it deserves a post all its own. Later!

This was not a particularly memorable Easter, yet all holidays are memorable in some way or another. I began the season of Lent with many good intentions and, as usual, achieved only a fraction of those intentions. Life “happened” to interfere with some, but my own procrastination or avoidance interfered with the rest. In an interesting twist, genealogy eased some anxious moments and provided an Easter bonus. Tears happened. Dogs disrupted. Food was prepared. And consumed. So here are a few random thoughts from this Easter and Easters past….

Treasures   Once the kids were grown and (mostly) out of the house, decorating for holidays seemed to lose something….. their participation…. their anticipation… and my desire to mark events for them in special ways. I haven’t decorated for Easter for several years, but I decided I would put out at least a few things this year. 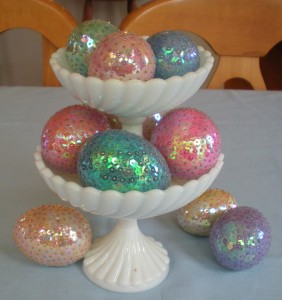 The first things I got out were these sequined eggs. They are special to me because my mom brought this craft with her on a visit one spring. She had made some for herself and taught me and the kids to make them. It was probably one of the last craft projects she did with them, as they were getting older at the time and we don’t live close to mom.

I went to the garage to peek into the big storage box with Easter things. I found it filled with Easter baskets, Easter grass, plastic eggs, and several dozen eggs I had blown out and the kids had dyed and decorated. Most people throw those eggs out when Easter is over. Not me!

One year I glued ribbon to a bunch of the eggs and hung them on the cafe curtain rods in the breakfast room bay windows. I decided to do that again. If you click on the pics you can see my young kids’ handiwork.

My husband and I used to stay up the night before Easter, filling plastic eggs with candy for the kids. Way too much candy! I found more than 5 dozen plastic eggs in that tub. We always ate a few chocolate eggs and M & Ms while we worked and stashed some away for ourselves too. And then we had to hide them. Preparing for the Easter Bunny may have taken us almost as long as preparing for a visit from Santa.

The plastic eggs are gone now – a bit of de-cluttering happened along with the decorating. Our church hosts an Easter egg hunt each year, so I filled some of the eggs and donated the rest of the empty ones for someone else to fill.

Side Benefit of Genealogy Last summer we took my mother-in-law to Denison, TX so she could visit the town where her grandparents had lived. We stayed in the town where our son lives – about an hour from Denison. My husband has a cousin (not 1st, but some other cousin relationship that I’m too lazy to figure out) who lives in the same town as our son, so she joined us on our genealogy trip to Denison. The next day, she had us over for dinner and our son came along. It was the first time he had met her.

Fast forward to last weekend. Our son was feeling so badly that he took himself to a walk-in clinic during the week and was told he probably had gall stones. He had an ultrasound Saturday morning and that afternoon the doctor called and told him he needed to go the hospital immediately. Our son lives over four hours away from us. We called the cousin and she met up with our son at the hospital and stayed with him until he was told (about 5 hours later) that he would not have surgery that night. What a blessing to know that she was with him while we made our way there!

We spent Palm Sunday at the hospital and our son had surgery that morning. The surgery went fine, although the surgeon said he didn’t know how our son had been walking around with his very enlarged and damaged gall bladder. His recovery has been without incident and we left him Tuesday afternoon (with his roommate and the cousin a phone call away). He doesn’t like to be fussed over and he was ready for us to leave. Our dear cousin invited him over for Easter dinner. Genealogy provided a deeply appreciated side benefit!

Tears  A friend whom I haven’t seen for several years has kids about the same age as mine. This past fall, her strapping 21-year-old college student son had a stroke and was diagnosed with an extremely rare type of cancer. They have spent the last months fighting the cancer with all their might. When we returned to our motel room after being with our son in the hospital, I received an email notice that the cancer was spreading quickly, treatment had ended, and he had been moved to palliative care.

My son had avoided serious complications from his health scare and would be fine. Their son would not.

During the Easter Sunday service, our minister showed a clip from the movie Steel Magnolias. It sure hit that place of pain and sorrow over the loss of a child.

Well, I can’t seem to make the clip about the guardian angel embed and neither of these clips include the lines about the privilege of being there when her daughter was born and when she left this world. I’m including the next clip from the scene – but our minister stopped it before the part when her friend suggests someone to hit. 😉

Anyway – this sure hit home realizing that my friend’s family was spending Easter in hospice.

Food  I did not go all out this year. Bought the ham on the way home from church on Easter Sunday! We were all well-fed even though I hadn’t done much to prepare ahead. The vegan child could eat everything but the ham – garlicky smashed potatoes; roasted carrots and parsnips prepared with honey, butter and crystallized ginger; my new favorite salad to use my CSA box greens, rolls and apple pie (also picked up on the way home from church).

Dogs!!  Thank goodness I’ve made an appointment with an in-home dog trainer and he will be here tomorrow. Our puppy (Dreamboat) has come a long way, but he barked at my other daughter and her dog as if they were intruders and he would never stop barking at her dog…. in a mean way. He spent most of Easter in his crate upstairs. The upside is that our other dog, Lola, and our daughter’s dog, Gloria, got along so much better than they ever have before. Dreamboat is kind of a scaredy cat and I guess he lashed out in fear. He’s a sweetheart most of the time…

Hallelujah!  Our Easter Sunday service always ends with the Handel’s Hallelujah Chorus from the Messiah. Anyone who wants to is invited to come up and join the choir. It is so magnificent and always gives me chills. I love it. Here is a flash mob version – reminiscent of the invitation for all to participate. Enjoy! 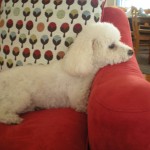 Lola was berating me last night. She hadn’t been on a walk for two days and she had a lot of pent-up energy seeking release. It was half past dark, so I promised her we would go first thing this morning.

It may not have been the first thing we did, but I kept my promise.

The afternoon highs are still in the 90s here, but we have experienced the hope of fall. The winds shifted a couple of days ago and there was the slightest, but real, hint of fall. You could feel it. You could breathe it. 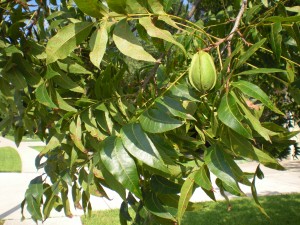 As I was contemplating the potential of cooler weather, I noticed a pecan growing on a young tree right at eye level as we walked by. That pecan transported me back to the days when my oldest daughter was a toddler and we would take walks and find treasures. A pecan lying on the ground would have qualified.

I found her a shoebox and we called it her Treasure Box. It became the dedicated space for all the treasures she picked up and brought home from a walk or found in our yard. 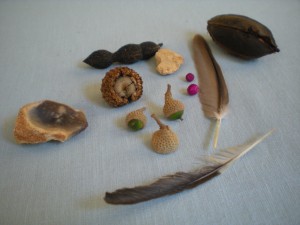 So on my walk this morning, I found myself picking up the kinds of treasures my daughter might have found 25 years ago – feathers, shiny rocks (always a favorite), acorns, acorn tops (good hats for fairies), pretty leaves (none of those today), and anything else that looked interesting.

It was a happy memory – walking with a little one, oooh-ing at a new find, talking about the newest treasure – what it was and why we enjoyed it, putting them in the treasure box, taking them out to look at again when we added more treasures. I hoped she would learn that real treasures are not found in a store.

My daughter added to her treasure box for a couple of years and hung onto it even longer. Sometime in her tweens, she went through the Treasure Box one last time and threw everything out.

I may have been more sensitive to this memory today because of something I saw on GMA before our walk. It seems that a young mother of a 10-week-old baby blogged that she was taking a vacation for six days. She wouldn’t be taking the baby with her. She has received a lot of flak.

It was annoying that GMA, in discussing this, paired one of their doctors with a “real housewife” from somewhere who, I thought, had nothing of value to say. I wondered how the doctor had allowed herself to be paired with this woman. I felt humiliated for her (the doctor). I changed the channel.

All I can say is – I hope this young mother comes back from her vacation refreshed and renewed. I hope she misses her baby while she is gone, for if she does, then there is a bond between them. And I hope they fill a Treasure Box together.