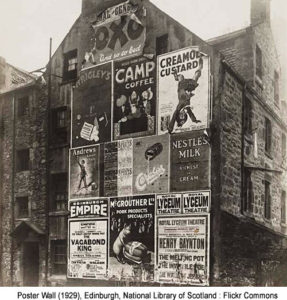 Sepia Saturday provides bloggers with an opportunity to share their history through the medium of photographs. Historical photographs of any age or kind become the launchpad for explorations of family history, local history and social history in fact or fiction, poetry or prose, words or further images. If you want to play along, sign up to the weekly Linky List, try to visit as many of the other participants as possible, and have fun. Click here to pay a visit:  Sepia Saturday

This week’s prompt photo features advertisements painted on the side of a building. I have a photo for this!

My grandparents, Charles and Abbie (Webber) Smith owned a truck stop in southeastern Iowa at the junction of highways 63 and 149. This intersection, near the small town of Hedrick, was known locally as the Hedrick Y. A previous post, Charles’ and Abbie’s Place, provides a view of the “Y” and a little more of this family story (including me as a baby).

The photograph below, dated 1950, provides a glimpse of the advertisements painted on the side of the building. My grandmother’s handwriting identifies the date and names. 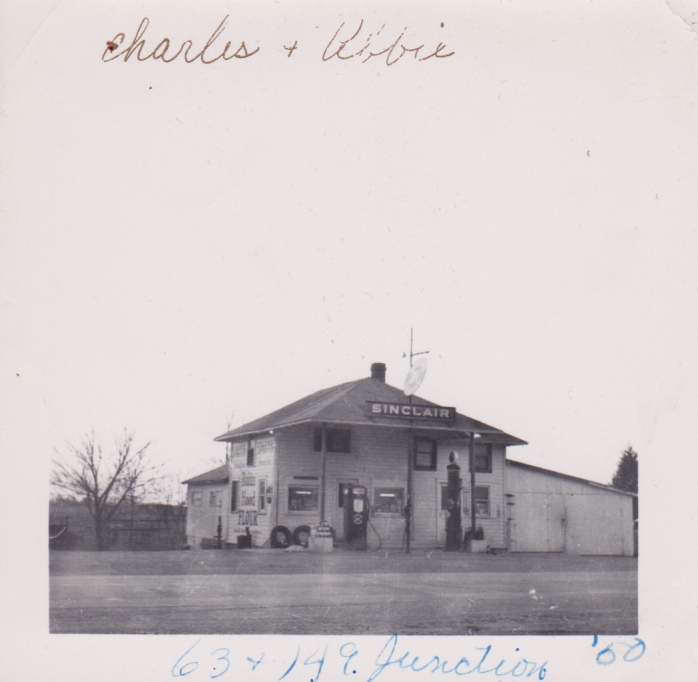 A closer look reveals the names “Smith & Smith” at the top. The next line is unreadable. And below center is an advertisement for Robin Hood Flour. 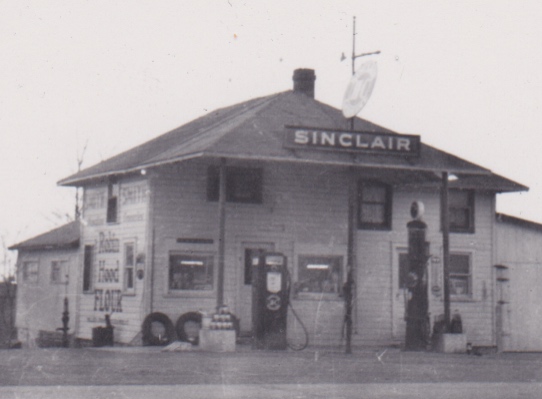 My mom and I are in the photo below, most likely taken at Easter 1954. We are standing in front of the same wall, which has been painted over, although the original paint still show through. I guess my grandpa wasn’t concerned with the need for an additional coat of paint. A metal sign has been added to the roof – featuring a Coca-cola bottle and my grandparent’s names, Charles & Abbie. The water pump is visible in both pictures, and it looks like a TV antenna now rises above the chimney. A Conoco sign is visible in the background, indicating that there had been a change from the Sinclair Petroleum franchise. 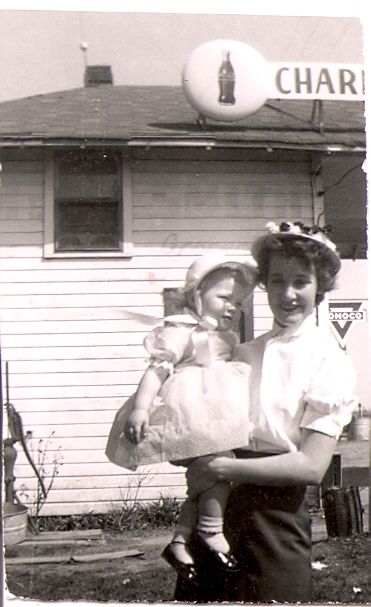 A Joe Lewis poster had a prominent place on a post inside. Unfortunately the photo is blurry. I searched for a poster like it on the internet, but came up empty. 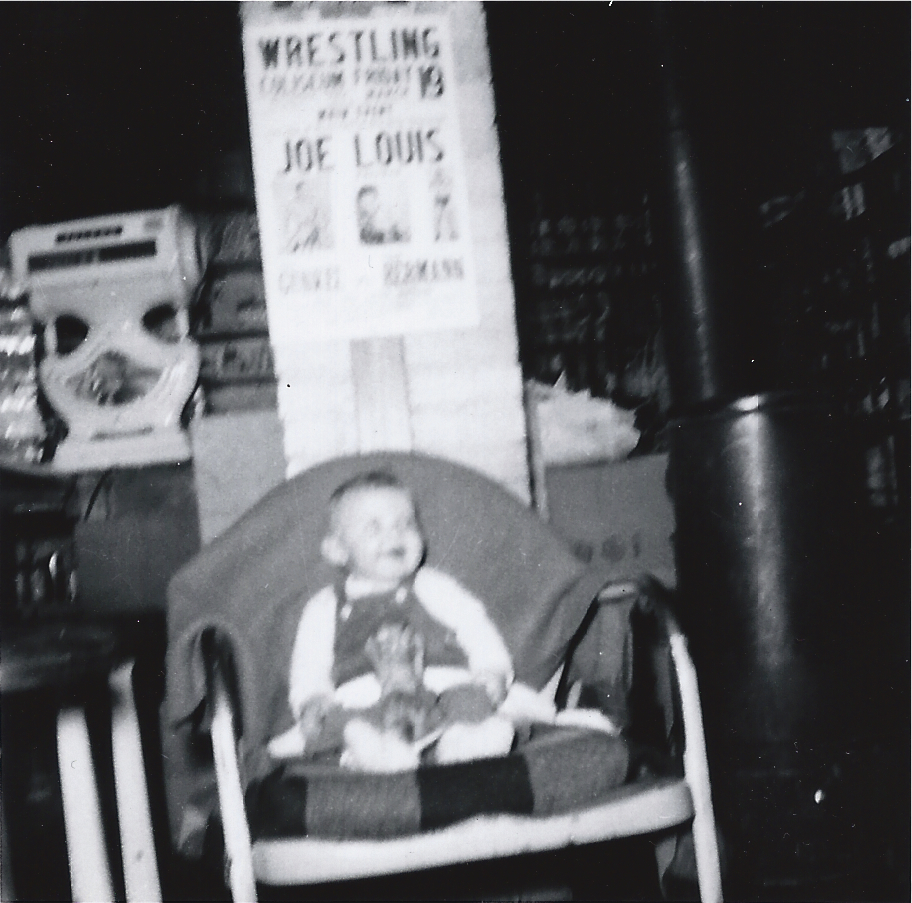 The picture below was taken during demolition of the building, which had undergone some changes from the previous photo. The roof line is different and the photo shows the opposite side of the building, now minus the attached garage. The second door and a window had also been eliminated.

There is another advertisement for Robin Hood Flour (Milled from ????). Maybe it says “Milled from Washed Wheat,” as shown on the sign at right. Also on the side of the building: “Smith & Smith” and “Gasoline.” 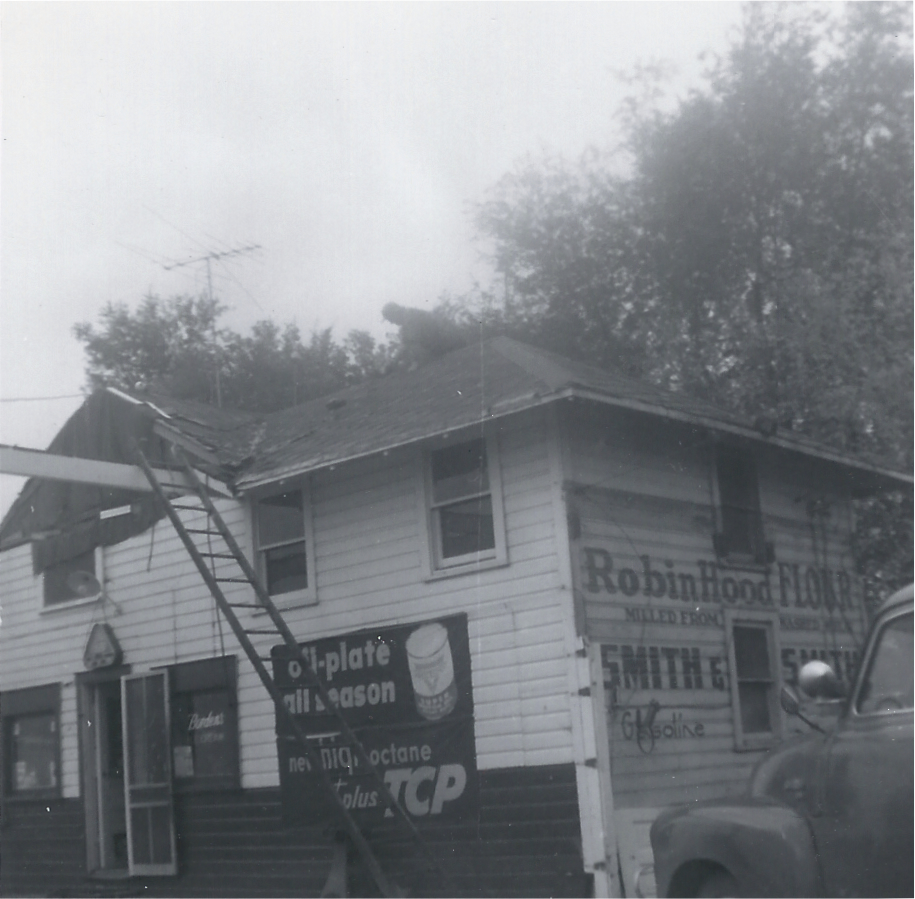 A new building replaced the original and my final photograph of Charles’ and Abbie’s truck stop is of a couple of posters visible inside the new digs. One promotes Marlboro cigarettes for women and I think the other is for Kool cigarettes. A local girl used to come and play with me when I was there and we are enjoying the benefits of life at a truck stop. 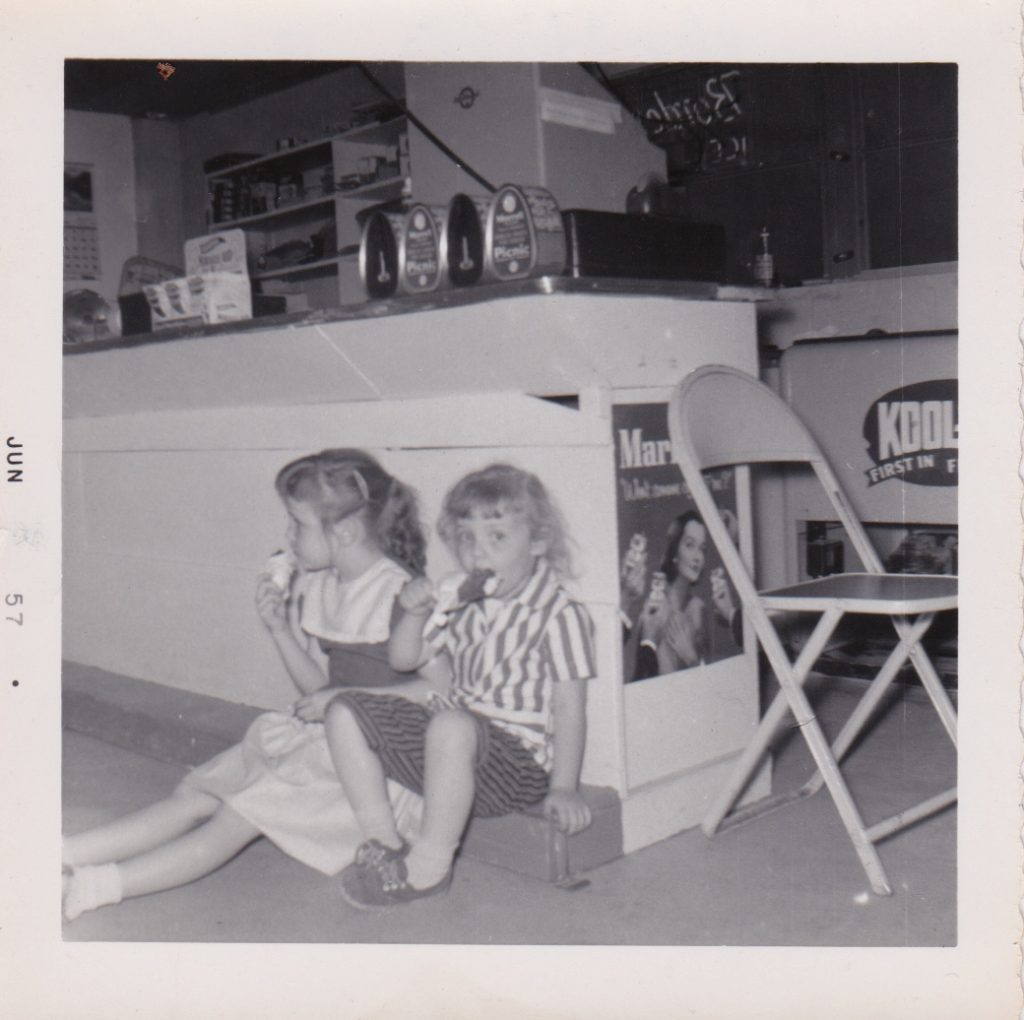 The photograph below does not include any signage. There must have been a lot of rain some time during or before August of 1958, as this picture shows some minor flooding on the property. The building is a little house that sat behind the truck stop. My great aunt and uncle lived there for several years. 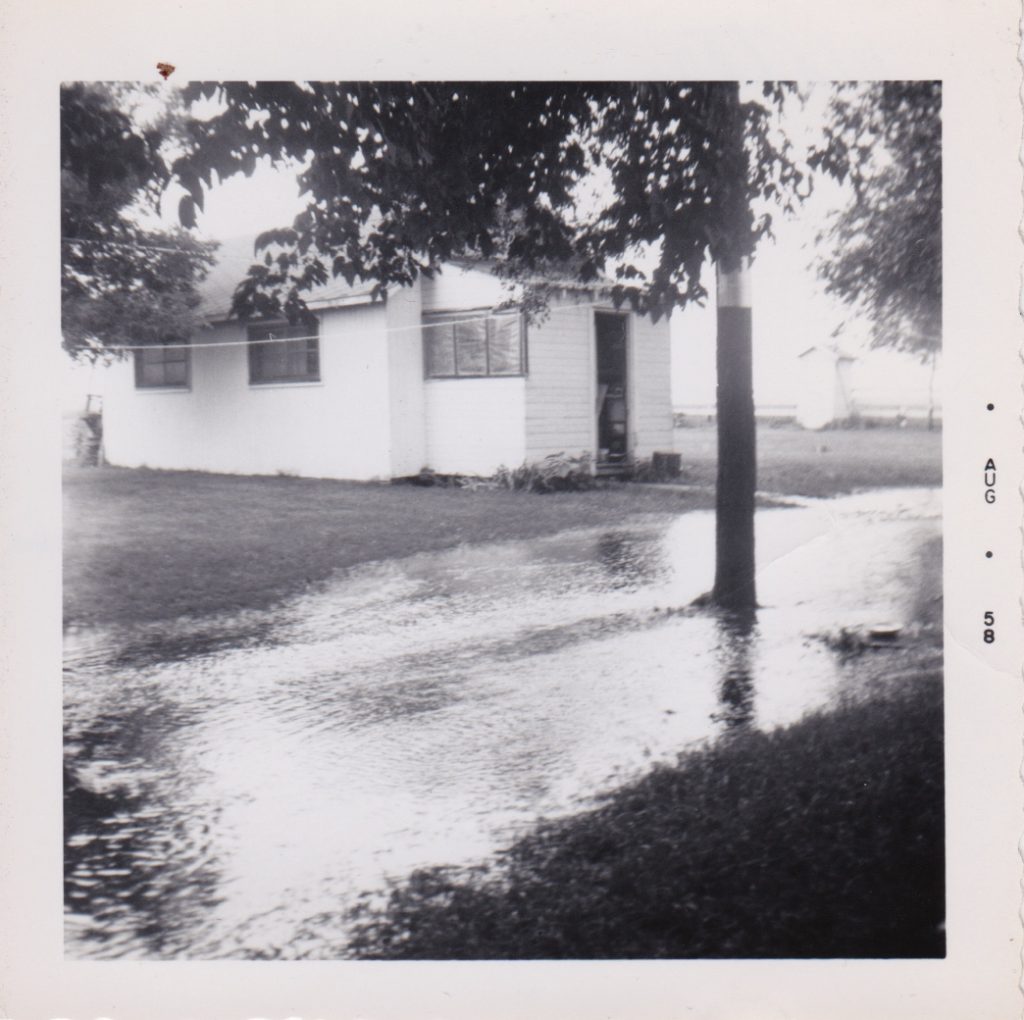 I included this because water and flooding have been much on our minds. Austin, TX has been under a boil water order for several days now due to flooding to the north and west of us that damaged and destroyed homes and lots of property, overfilled the Highland Lakes in central Texas, and overloaded our water treatment facilities. We have been taxed with doing what we can to conserve water and treat our own water for drinking and cooking. 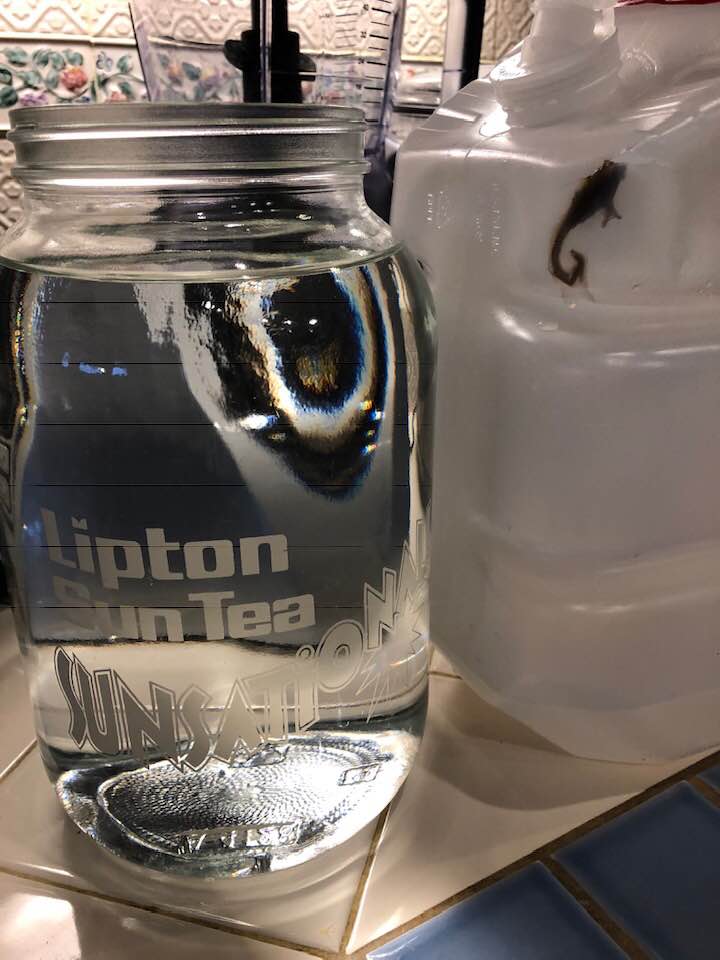 We had stored some water jugs in the closet years ago, so have been putting them to good use. I got one out and noticed it was leaking. I got out this sun tea jar (advertisement on it, so this actually fits the theme!) and began to transfer the water from the jug to the jar. And then…. Ack!!!

I wondered if drinking scorpion infused tea would give me super powers. I chose not to test it out.

Being under a boil water order and the necessity of conserving water to get out from under it certainly makes a person more mindful. We hope the restrictions will be lifted late tomorrow.

I had to take a break from participating in Sepia Saturday. Two kids moved out of state in the month of September and we inherited a big grand-dog – and I can’t remember what else, but that was enough to keep me away. I didn’t realize the photo I’ve been thinking about was the prompt for last week! Oh well. I’m going with it anyway. I’m just 10 days late. 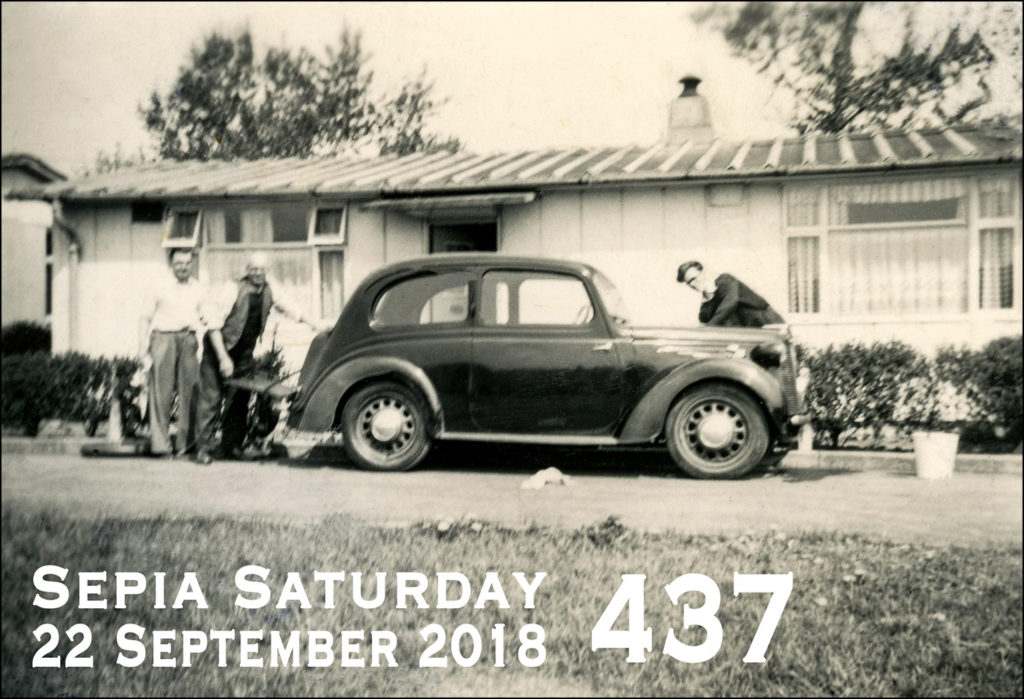 The prompt photo is titled “The Family Car” and features some men washing and shining up their vehicle. For some reason, it reminded me of this … 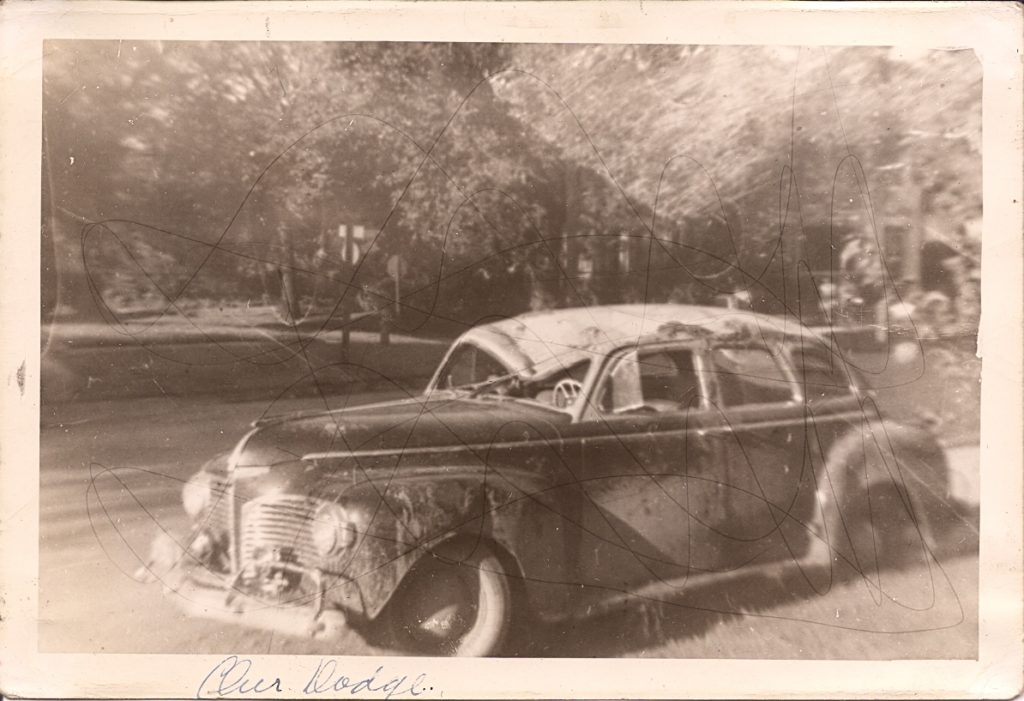 My Grandmother wrote “Our Dodge” on this photograph. What happened to the family car?

I called my dad(Jerry) and asked him to tell me. He began by saying that only four people ever knew what happened. At least two of those people are deceased and Dad has now broken his promise never to tell.

The car in question was a 1941 two-tone maroon Dodge. Dad said that my grandfather, Charles Smith, never bought anything brand new, but remembers the car as being “pretty new” when they got it. My little peek around the internet suggests it was a 1941 Two Tone Luxury Liner Town Sedan. 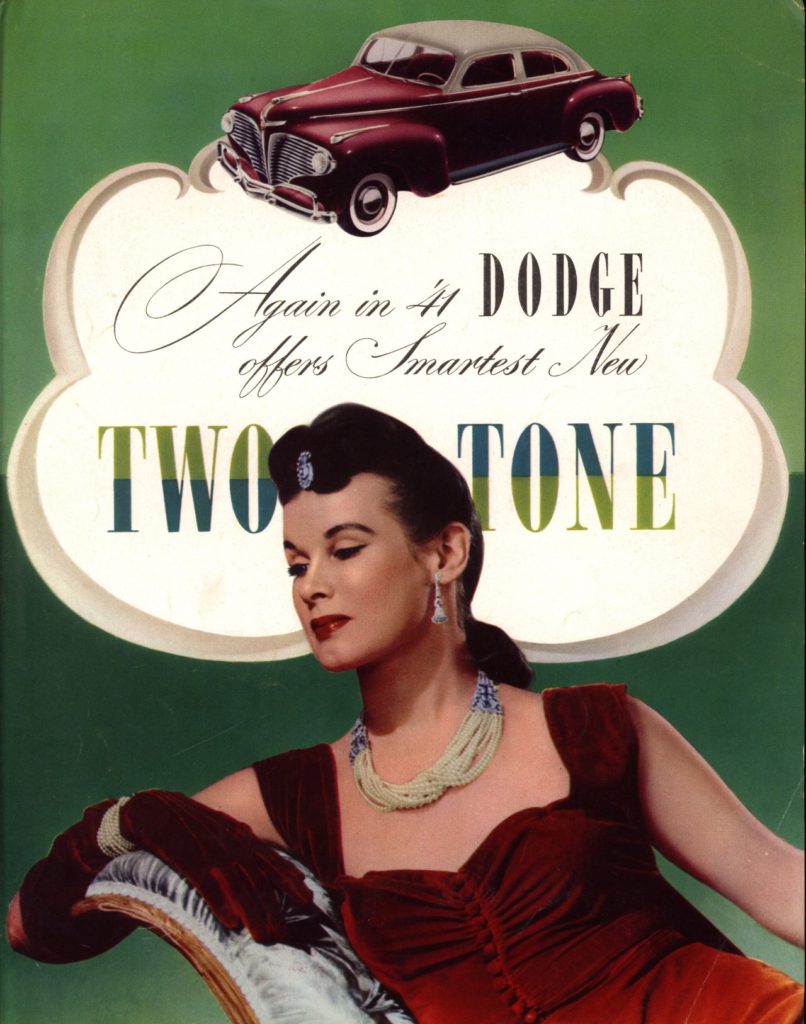 One must have felt very fancy in the smartest new two tone! 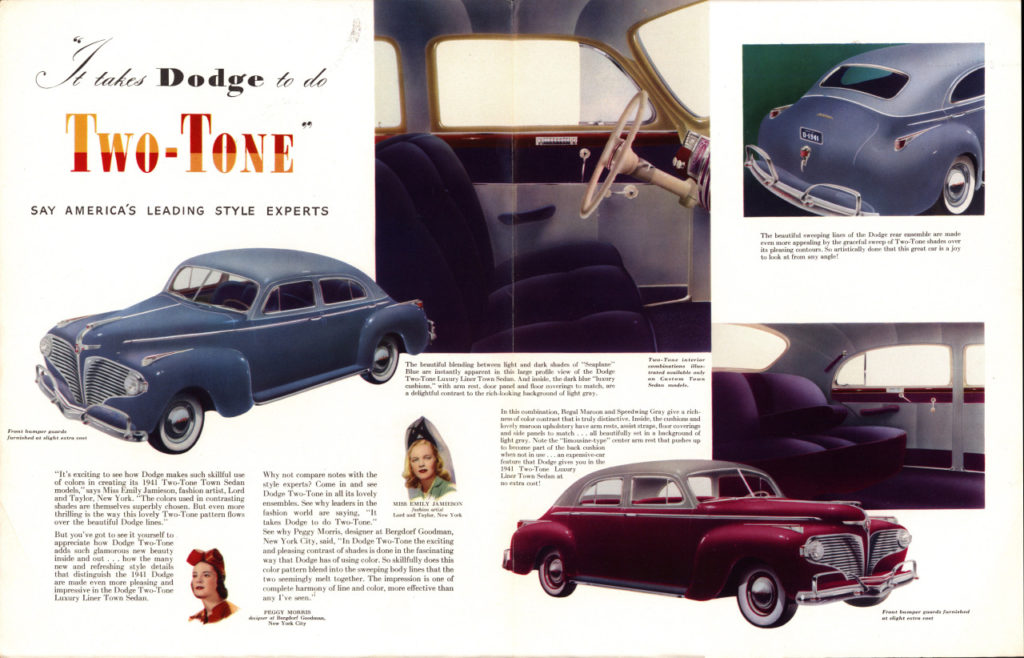 “In this combination, Regal Maroon and Speedwing Gray give a richness of color contrast that is truly distinctive. Inside, the cushions and lovely maroon upholstery have arm rests, assist straps, floor coverings and side panels to match … all beautifully set in a background of light gray.”

I can just feel those luxurious seats, can’t you?

My dad’s brother, Mike, took his girlfriend for a drive in the family car. The Smith family lived on a farm near Packwood, Iowa, and Mike was in high school. Perhaps to please his girlfriend (we’ll never know that part of the story), Uncle Mike let her drive.

In those days, even the “main” roads between small Iowa towns were gravel roads. The girlfriend “lost control, went over the side and rolled it,” as Dad tells the story. 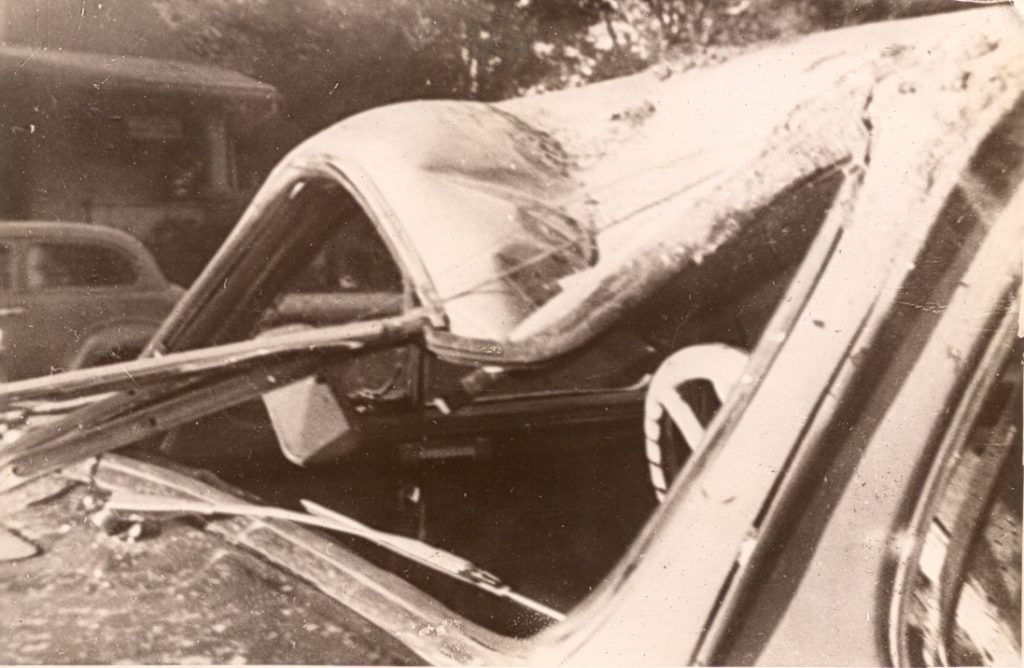 Thankfully, no one was hurt.

In this last photo of the series, Grandma Abbie wrote, “After the top had been pried up.”

Yikes! How bad was it before the top was pried up?

Uncle Mike told his mother what happened, but everyone agreed not to tell his father that Mike let his girlfriend drive the car. Dad thinks my grandpa drove the car to Iowa City and it was repaired at a body shop there.

A few years later my Grandpa had to sell the car to save the farm. It was fun while it lasted… 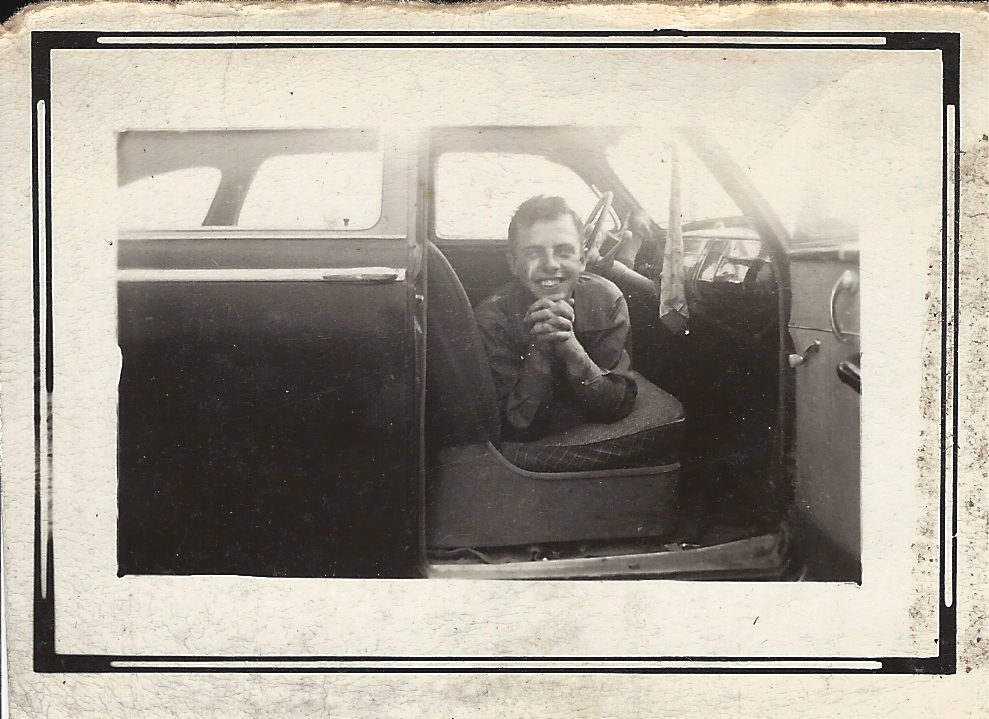 Uncle Mike in the family car

This is my offering for Sepia Saturday. Please visit others who participated this week – but will be responding to an entirely different prompt!