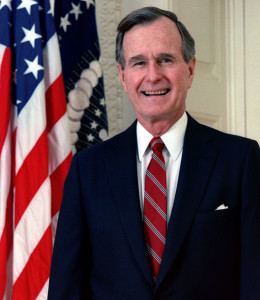 Coincidentally, the day before the former president’s birthday, a cousin posted the following to Facebook:

I wish I could call my cousin Mike Smith today to tell him what I learned via Internet last night. He would have been delighted to know that we are cousins (distant cousins) of two presidents – Bush I and Bush II. I don’t want any of my cousins dissing this relationship. We have a very diverse extended family, even among more closely related cousins, and I prize that diversity. It says something about the American experience. I love all my cousins for who they are, even when we disagree about politics, religion, or even the weather. And I hear that cousin Jeb is about to formally announce he is a candidate for President.

I’m including her post because I appreciate her preemptive admonition to all of us not to diss this relationship. 🙂 Many of us are passionate about our politics, but we are not always of the same mind!

She asked me to figure out our relationship status to the presidents Bush. I already had our common ancestor in my tree and it was pretty easy to follow the genealogy report she found online and match it up with ours. I looked for a couple of other sources, and felt pretty confident. After all, genealogies of really important folks have usually been well vetted and documented. And, because our common ancestor is also well researched, it was just a matter of inputting the line that leads to the Bush family. 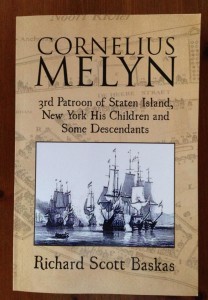 Her request also prompted me to get out a book I have been meaning to read about our common ancestor – Cornelis Melyn. I read the genealogies of our two lines as reported in the back of the book and made comparisons to the genealogies found online, my research, and that of others in our family.

Now I’m reading the juicier stuff at the beginning of the book, where there is more information to flesh out a bit of the life of Cornelis and his family. Maybe I’ll follow up in the next few days with some bullet points of interest to my family members.

So how are we related? Ancestry.com calculates that George H. W. Bush is my 10th cousin 1x removed. George W. Bush and his siblings are my 11th cousins.

Here’s how my common linage traces to George W. Bush. Our lines meet in the middle of this list, Cornelis Melyn being our common ancestor. Sisters Cornelia (Bush line) and Mariken (my line) are our progenitors.

I’ve never really understood how the whole removed cousins thing works, nor have I have I taken the time to try to understand it. Now I know that George W. and I are of the same generation – you can count them on the list above. His father is one generation removed from me.

I’ll still rely on my genealogy programs to figure it out for me, though. 🙂