Smadar Belkind Gerson at Past-Present-Future has added a new post, Photo Detective Study of Produce Row, that includes information about the Morales Banana House in Houston Texas. She did some great detective work and was able to date the photograph of flooding that I included in my post about the Banana House.

Smadar was so kind to include additional information about the Morales produce business in her blog post! And she found video footage and another photo that may offer additional glimpses of the building. I’m still looking them over!

Please hop on over and take a look!

There is something puzzling about the order of these Family Record pages. The order is a blank page paired with a Births page; a Deaths page paired with Marriages; and then another Births page. I suppose I see the logic of adding a second page for births at the end of the section – we do seem more likely to record births and there are typically more births to record than marriages. 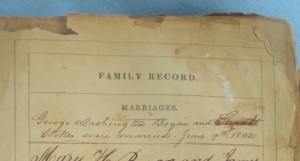 Here’s one scenario. The first entry made to this family record was the marriage of George Washington Bryan and Sarah Stokes. It was their new family Bible. The writer opened the Bible to the Marriages page and established the family by recording the marriage of the owners of the Bible. Then the writer turned the page and started recording births there – forgetting about the previous Births page that was “out of sight; out of mind.”

Let’s take a look at what appear to be the first entries in the family record. Here’s the marriage record of George and Sarah Stokes Bryan again… 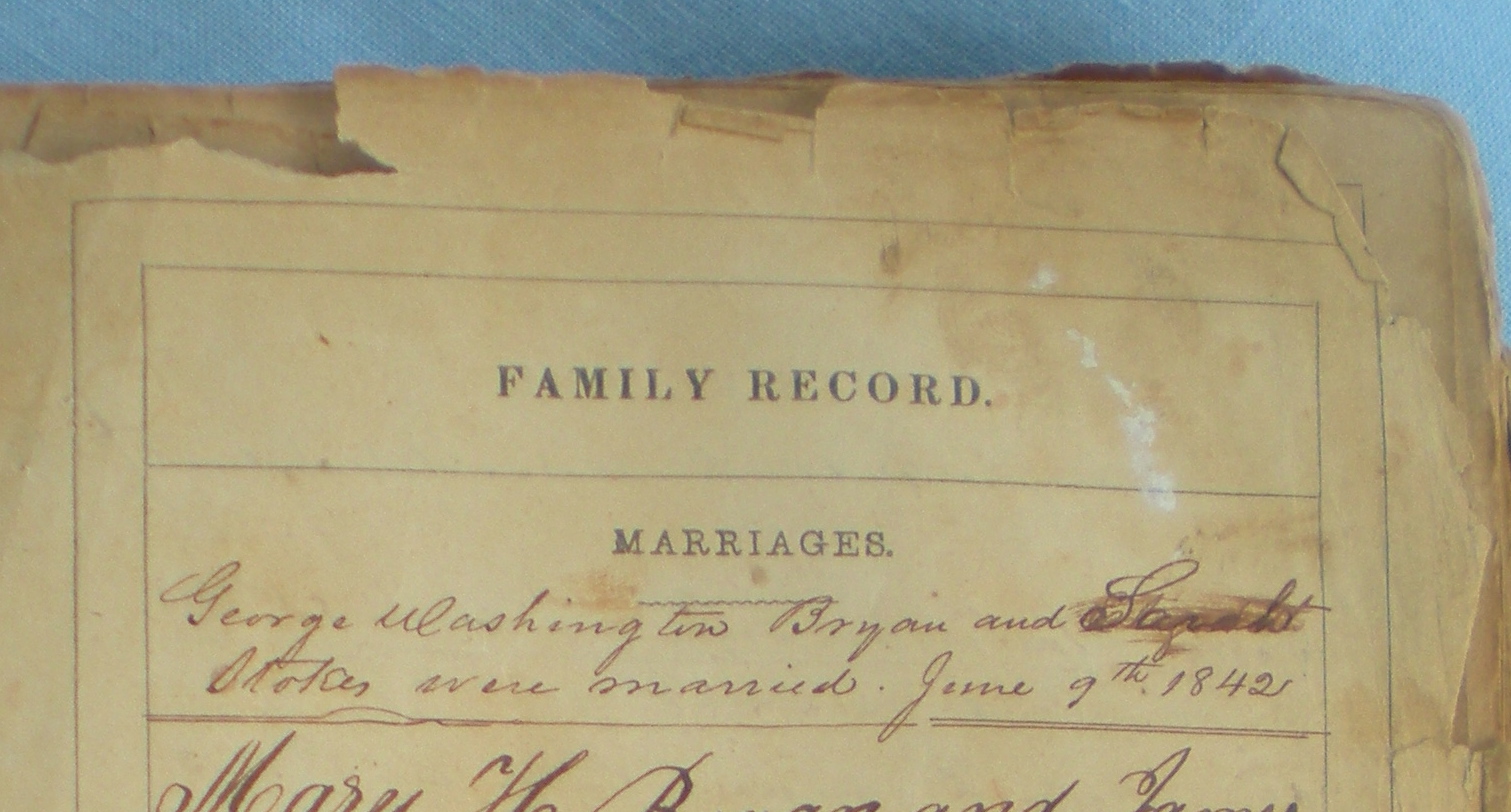 The handwriting is small and neat, with some flourishes. The ink looks brown – maybe due to aging? And a line is drawn to separate this first entry from any that may follow.

This same pattern appears on the Births page that follows. 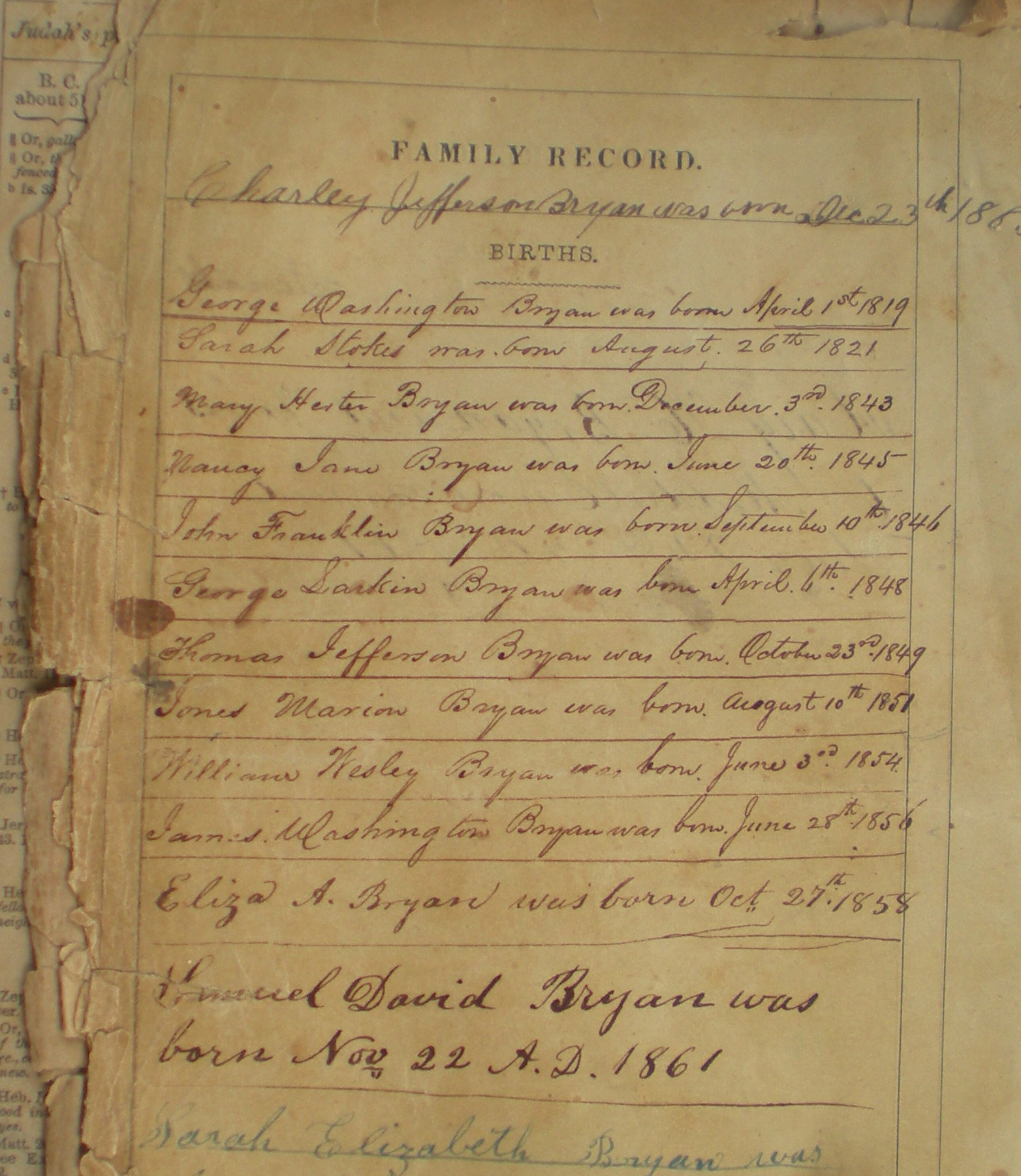 Disregarding the entry at the very top, it looks as though the births recorded beginning with George Washington Bryan through Eliza A. Bryan could have been written at the same time as the marriage entry on the previous page. The size, style, ink, lined entries, and even the pressure applied seems exactly the same. The dates range from 1819 to 1858. The entry for Samuel David Bryan born in 1861 may have been written by the same person, but the writing is larger and the pressure/thickness of the writing is different.

There are two deaths recorded on the Deaths page opposite the Marriages page that also seem to match. 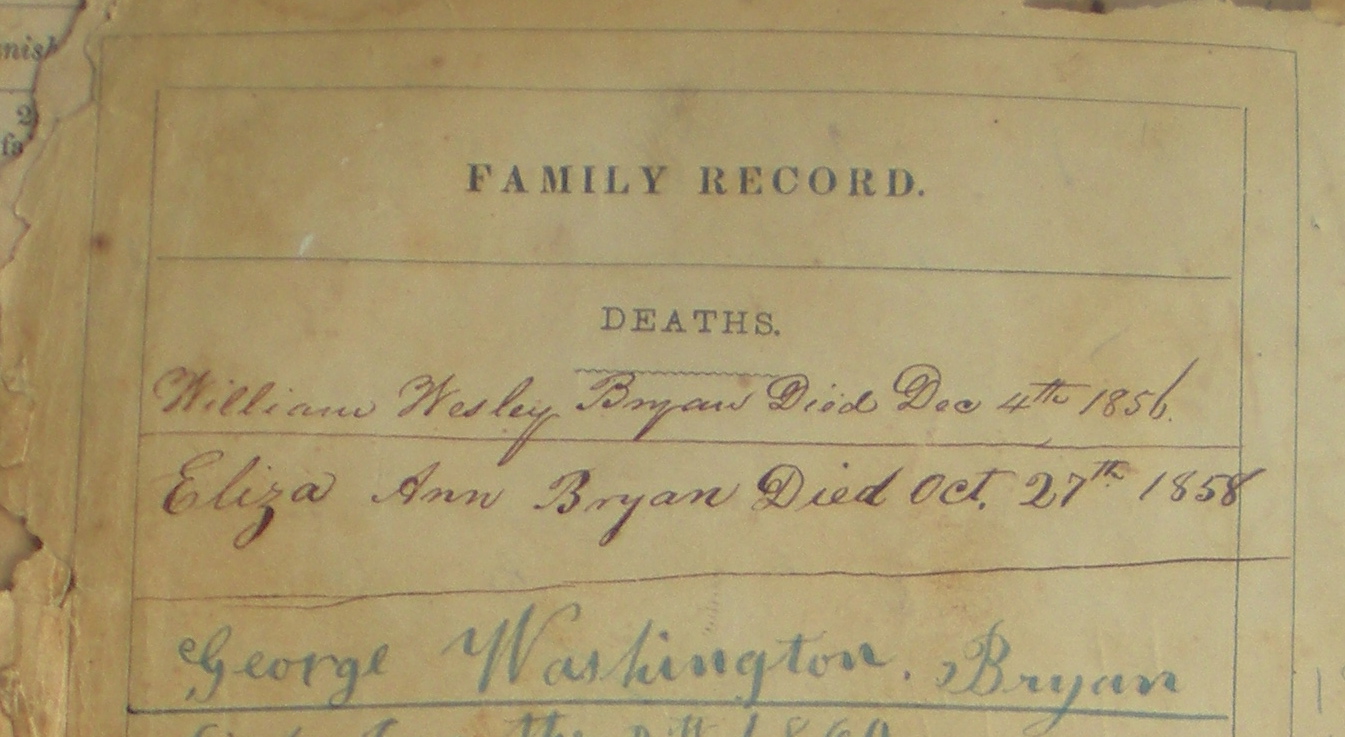 Although the entry for Eliza Ann Bryan above looks slightly different than the others – there seems to have been more pressure applied while writing and it’s just not quite as small and neat – I think it was written at the same time. Here’s why…

And did you notice the smudging of Sarah’s name in the marriage entry? 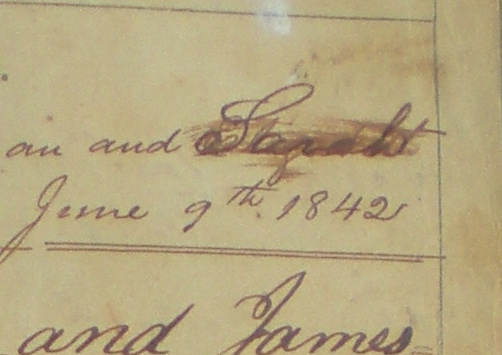 It looks as though someone wrote “Eliza” and then tried to “erase” the ink and wrote “Sarah” over the mistake. Eliza was on the mind of the person who made the marriage entry. This is something I could not make out just by visually examining the Bible. But photographed, cropped and enlarged, it becomes visible.

Here is an alternate scenario. The writer opens the Bible – never before written in – to the Deaths page to record the death of Eliza. But another child had died two years before. That death must be recorded first – then Eliza. The page on the right is the Marriages page, so the writer decides to record the marriage of the parents of these two children. With a heart full of grief, the writer substitutes Eliza’s name for Sarah’s name in the marriage entry. Wanting to record these events in best form, the writer tries to cover this mistake. Once these entries are completed, the writer turns the page and records the births of everyone in the family up to and including Eliza.

And what of the death of William Wesley Bryan recorded just above the entry for Eliza?

William was the seventh child born to George and Sarah – as documented on the Births page. He was born June 3, 1854, presumably a short time after their arrival in Ray County. He died December 4, 1856. Perhaps the family was not in possession of a suitable family Bible at the time of William’s death, or maybe the thought of recording the death of their toddler boy was just too much to bear at the time.

Whatever the case, after the birth and death of Eliza Ann on October 27th of 1858, her life was honored by documenting it in the family Bible. For this child, there were no memories  to hold on to but those of labor, birth, tears, death, and burial. And so, perhaps, it was particularly important to document the life of Eliza Ann; to recognize her place among those who cherished her; to remember that she had lived, if only for a fleeting moment in time. All who came before her and the brother who left before her were recorded along with Eliza in the Bible, a physical representation of her place in the family.

This sad event may have provided the impetus to record all of the valuable family information found in The Bryan Family Bible. Once begun, the Bryan family continued to record the births, marriages and deaths of their members for many years.

Who was the writer? I believe it was Eliza’s father, George Washington Bryan. But that’s for another day.

Since the front cover and first few pages of the Bible are missing, I don’t know if anything of interest or genealogical value were lost with them. The pages designated for recording family information are between the Old and New Testaments, and those pages are mostly intact. First is an untitled page on the left and a page to record births on the right. 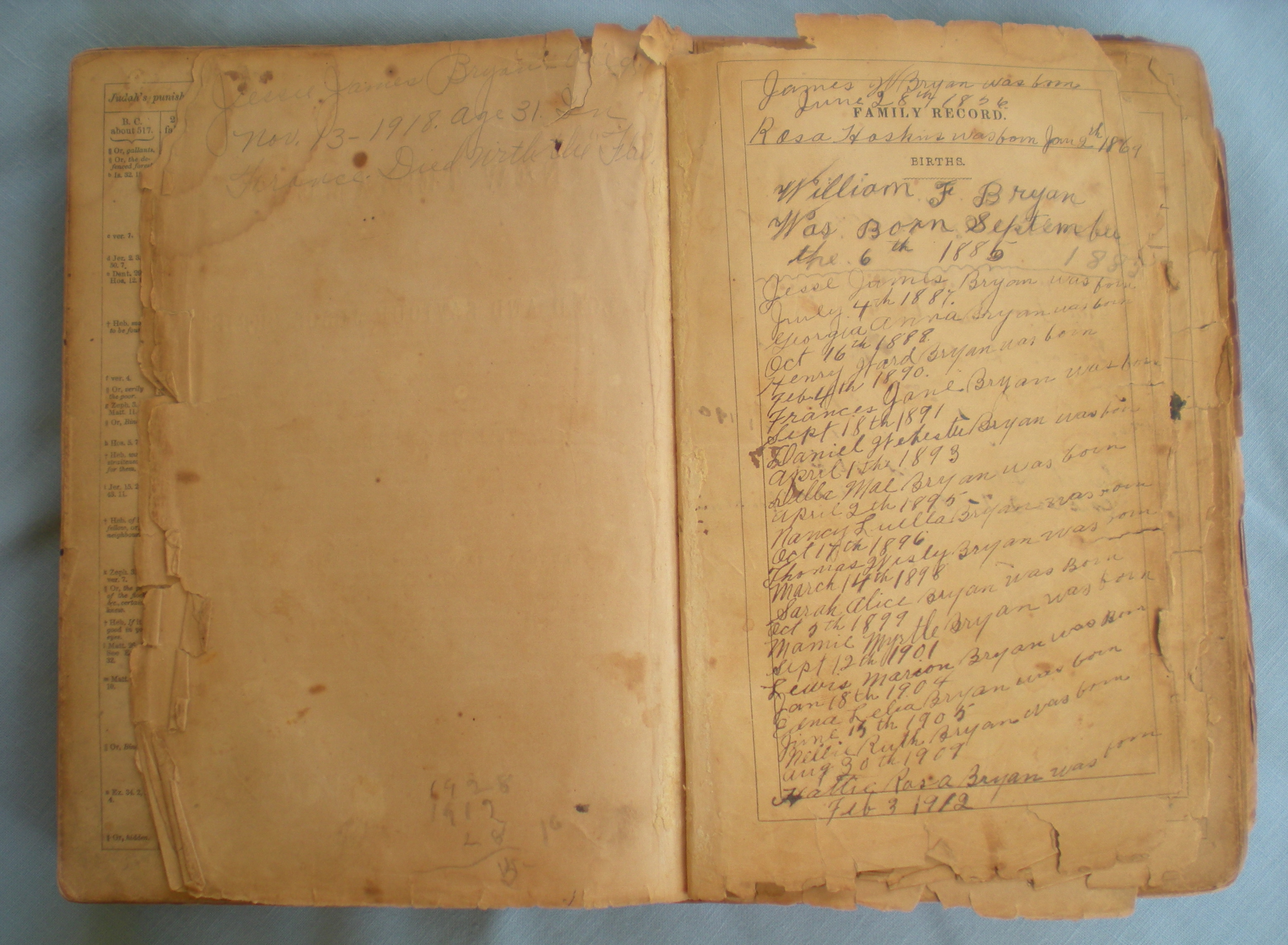 Here’s a closer look at the Births page 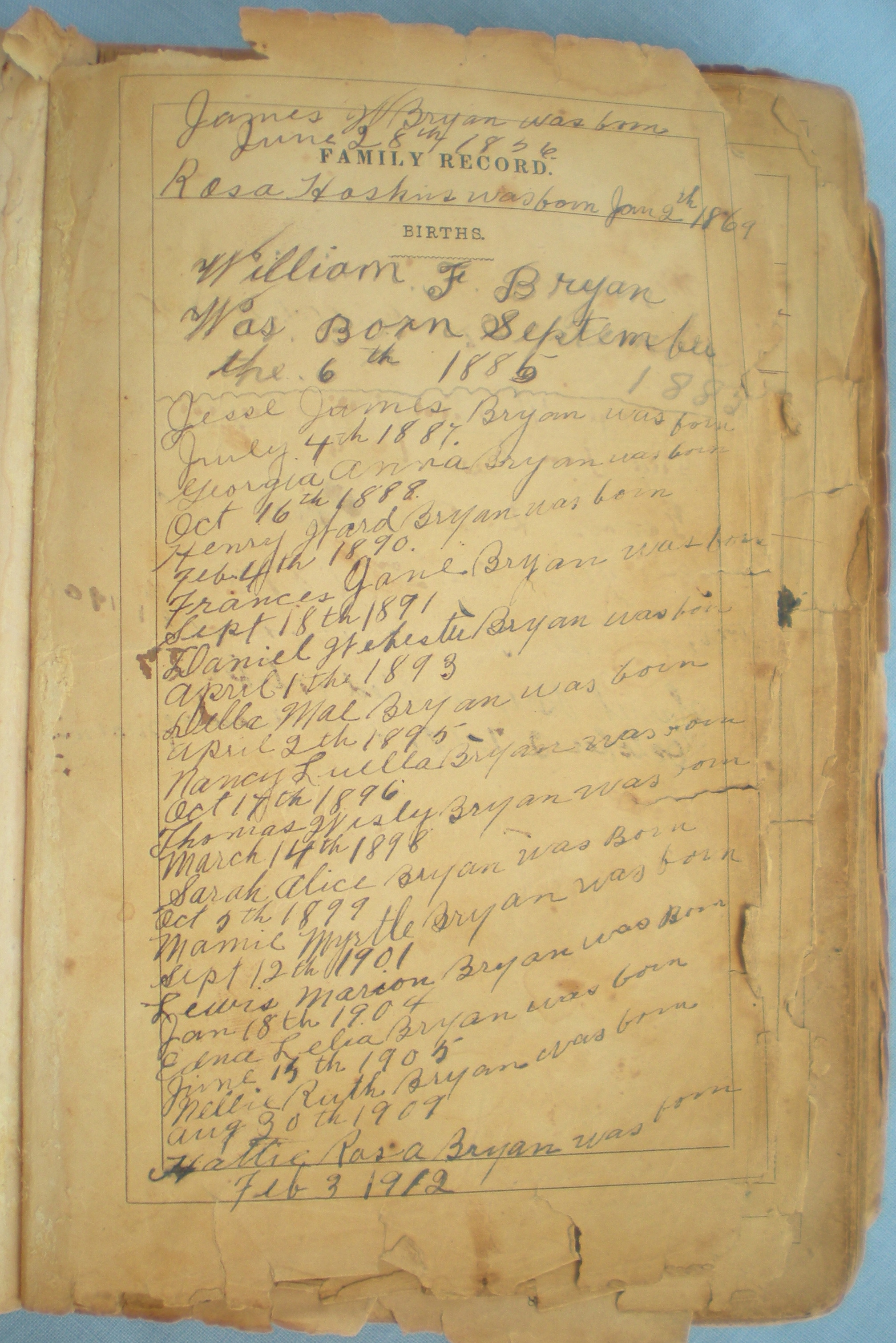 How exciting to find all of this information recorded by a family member! A wealth of names and dates! 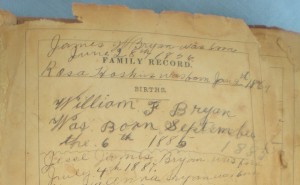 t looks to me as though the same person recorded most of the births. There is a little wavy line drawn about an inch below the word “births”. It makes me think that whomever recorded these births knew they were missing information about births that occurred before the first one they knew – the birth of Jesse James Bryan in 1887 – so they left a space where earlier births could be added. Someone else appears to have recorded the birth of William F. Bryan, but used all of the allotted space for this one entry. This addition looks like it was first written in pencil and then gone over in ink. The second writer may have also made the little wavy pencil line, which mimics the little line printed below the word “births”.

Ah – the best laid plans! Once Person-With-Too-Big-Handwriting added the birth of William F. Bryan, it looks like the first writer took matters back into his or her own hands and recorded the births of James W. Bryan and Rosa Hoskins at the top of the page and still in chronological order.

Since William’s birth looks like it was first written in pencil, it could have been erased. Did the first writer preserve the dignity of the second writer and let the addition stand even though it wasn’t what he or she wanted the page to look like?

I initially thought that the second writer was probably a younger member of the family – and the addition of the wavy line seems to support that. But as I look at the handwriting again, I see that it could be the handwriting of an older person. Maybe three people contributed to the page: the primary writer, the second writer, and the wavy line drawer – a question that may never be answered. I like to think that the primary writer chose to preserve what the second writer added – but with one correction. The year was first written “out of bounds”, and it looks like the first writer wrote the year a second time, closer to the rest of the entry.

I have no idea who recorded these births, but he or she was alive in 1912 as that is the last recorded birth on this page in their handwriting.

Now that I’ve started this, I’m not exactly sure of where I’m going. I hadn’t even noticed the purpose of the little wavy line until I started writing this post so certainly had not planned to write about it. I think I’m just going to let the genealogy muse lead me along. And the muse is telling me that we will come back to the page on the left at a later time.

I wonder if I’ll be able to determine the possible writers as I work my way through the pages of the Bible?