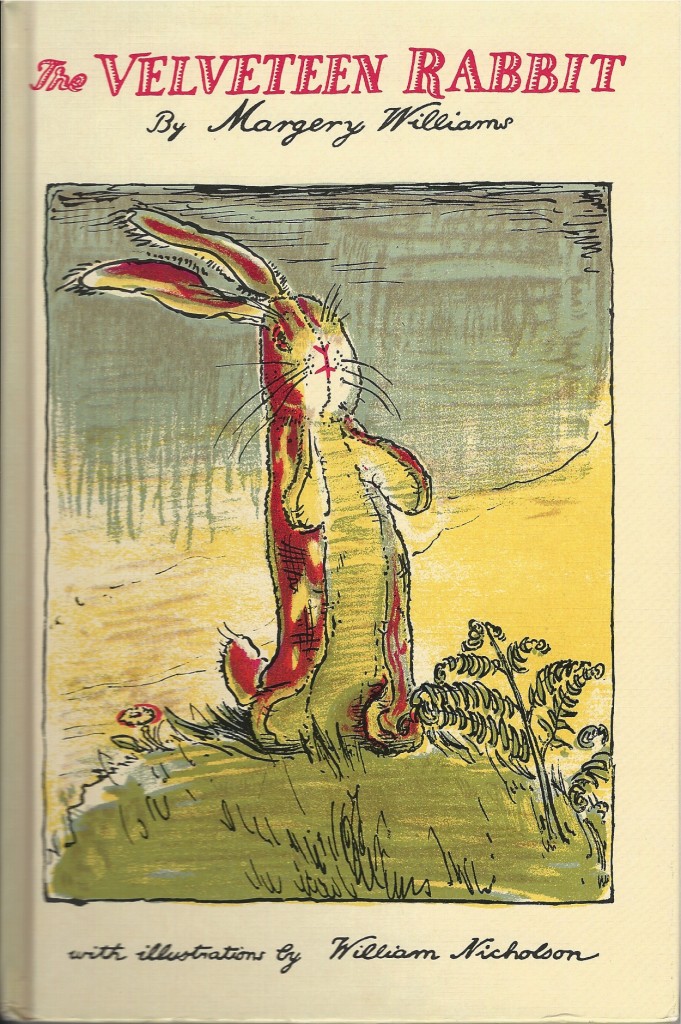 I can’t really call myself a genealogist, or even much of a family historian. Every bit of information I have gathered has been via the internet, family papers and photos, or talking with relatives. I have sent off for a few vital records and once I even requested a couple of microfilms to view at the local Family History Center…. That’s kind of like a real genealogist.

But I had never actually gone to a place where my ancestors lived. No visits to county courthouses. No cemeteries. Nada.

Just like the Velveteen Rabbit needed to be loved to become real, I need to get out of the house and do some research to become real.

Two days after Jo’s funeral, Dad(Jerry) needed to get out of the house, so we took an afternoon drive to Van Buren County, Iowa. I had done a little bit of preparation before leaving Texas – but not much given that funerals and the travel involved are typically unexpected and offer little time for advance preparations. I found “Tips for Genealogy Research Visits” on the Van Buren County Iowa Genweb Project website, and I printed out a genealogy report for the Smith side of my family. That’s all the preparation I had time for. 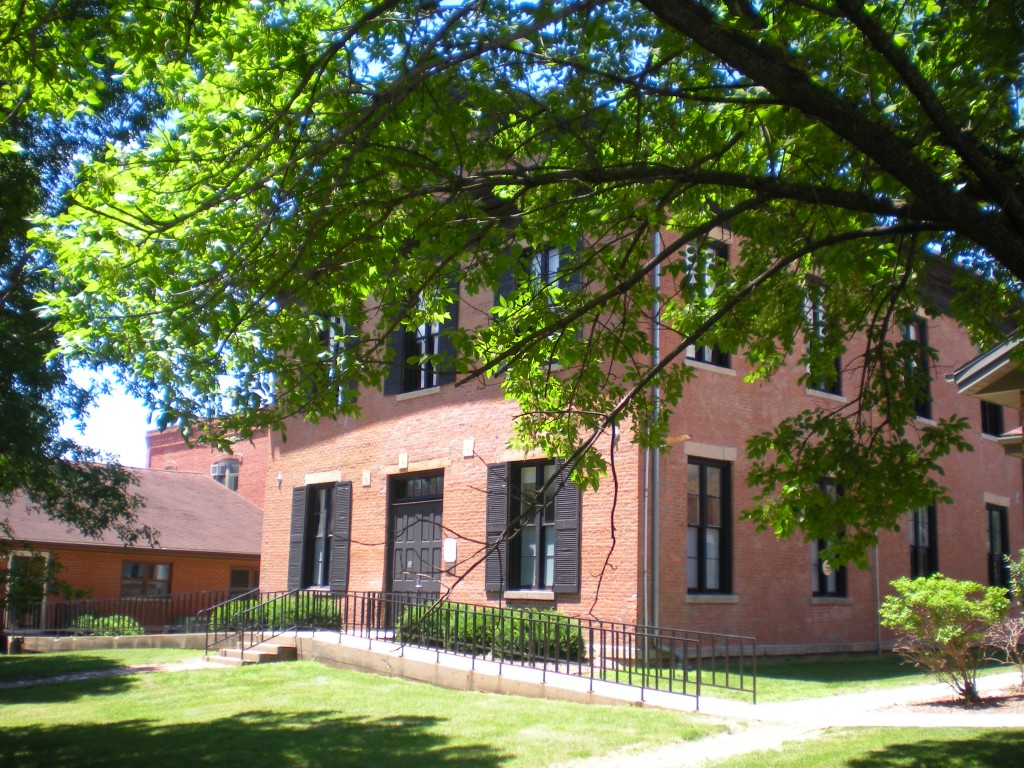 Our first stop was the Van Buren County Courthouse in Keosauqua. Unfortunately, we arrived at lunch time and no one was there. We looked at the historical pictures on the walls and the visitor brochures and were about to leave when an employee returned. She directed us to the Keosauqua Public Library where she thought we would have better luck finding information. Dad was getting tired and needed a little nap, so a stop at the library would serve his purposes as well as mine. Libraries are quiet and usually have comfy chairs for reading.

The librarian pointed me to the genealogy corner maintained by the local genealogical society and said Teresa was back there and she would be able to help me. Teresa makes frequent visits to the cemeteries in the county and contributes to Find a Grave, so she was able to give me specific directions to the cemetery I wanted to visit. I didn’t have much time – just 40 winks worth – but Teresa helped me locate a file on my family and while I was copying the contents, she found an obituary for me. When I left, she gave me her cell phone number and email address so I could contact her if I needed gravestone photos. Genealogical kindness at it’s best!

I didn’t want to leave the library. I hadn’t begun to scratch the surface of what is available. There is so much more! But my 40 winks were up and we wouldn’t make it to the cemetery if we didn’t get on our way.

I thoroughly enjoyed my baby step into “real” genealogy and look forward to another visit to Van Buren County!

Next up – our visit to the cemetery.

I can identify my grandmother’s handwriting. When I look at the back of a photograph and see her distinctive script, I know who identified the people in the picture. I can pick up one of the notebooks that she kept and know that it is hers, even though her name isn’t there. But my recognition of family handwriting comes to a full stop when I move past my parents and grandmother. Until now. I found something to help me identify one set of great-grandparents’ handwriting – my grandmother Eveline Coates’ report card. 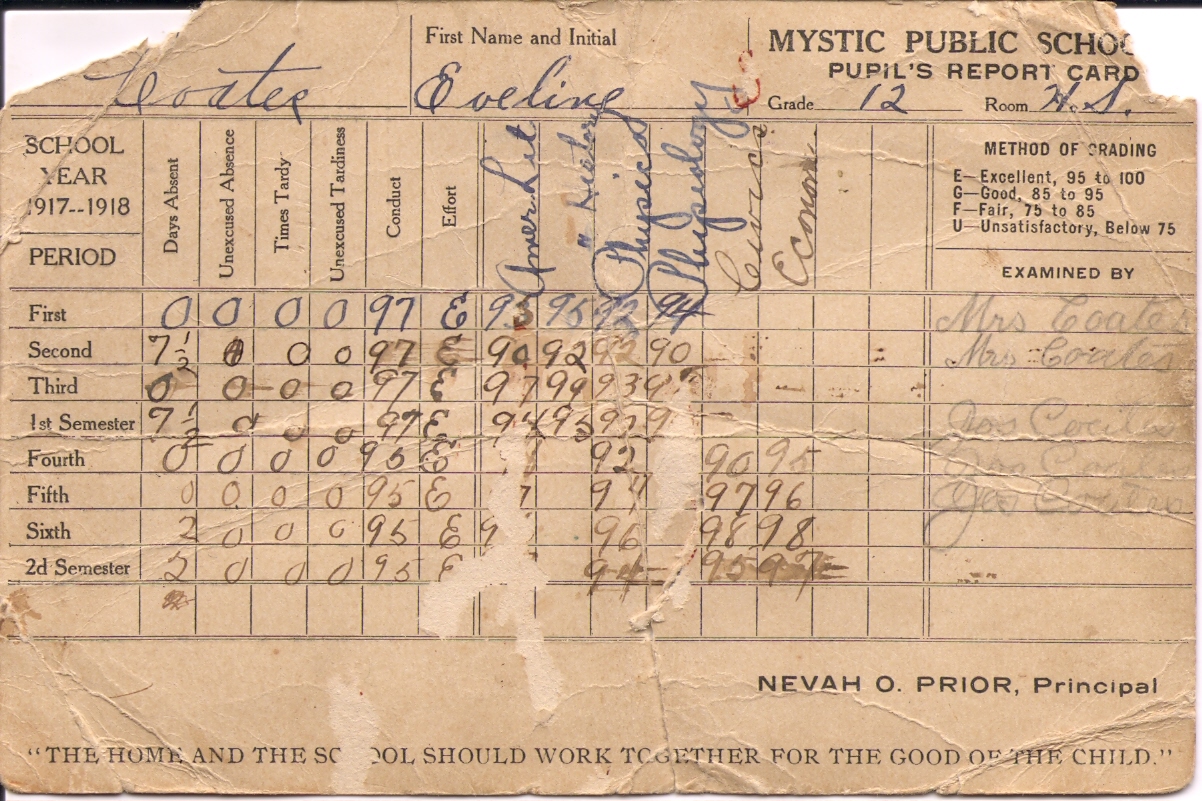 Both of Eveline’s parents signed the report card and now I can use it to compare with the handwriting in the Coates family Bible. 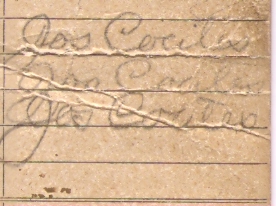 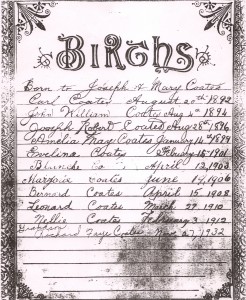 Three samples of handwriting appear on the Births page. I presume that the early writers were Eveline’s parents, Joseph Coates and Mary Harris Coates.

Comparing the signatures on the report card to the entries on the Births page, it looks as though Mary wrote the first line and made the entires for Carl and John. Then the handwriting changes, and Joseph made the entries for Joseph and Amelia. Then back to Mary for Evelina, Blanche and Marjorie.

Eveline Coates began writing with the entry for Bernard and continued to the end of the page.

My grandmother Eveline’s handwriting appears on the Births, Marriages and Deaths pages, but only after her parents stopped writing in it. There is a fourth person’s handwriting on the Deaths page that I cannot identify. I believe that the Bible passed from Joseph and Mary Coates to Eveline Coates and then to whomever wrote the last two entries on the Deaths page. (Maybe Aunt Wilma?)

Eveline’s mother, Mary Harris Coates, was an immigrant from England. Eveline often told the story that her mother arrived at about 9 years of age. The other kids in school teased her so much about her accent that her mother schooled her at home. I imagine her spending a great deal of time practicing her flourishes and curlicues in the solitude of her home.

(I am SO ANNOYED because I have tried to add the Deaths page here about 20 times and every time I do, everything on the page messes up. If you would like to take a look at it, go to the previous post. I give up!)

*****
Heard from my uncle after posting and he believes it is Aunt Wilma’s handwriting on the Deaths page. 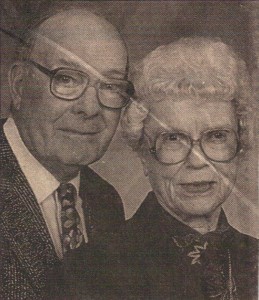 Laurabelle Hockensmith was born May 7, 1902 in Ottawa, Kansas, the 13th of 14 children born to Samuel Francis Hockensmith and Louisa (Lou) Case. Laurabelle was the younger sister of my (step)grandfather Glenn Hockensmith. I didn’t know Laurabelle well, but when I visited my grandparents in Junction City, Kansas, we would go to her home or they would drive out to the farm. Laurabelle and her husband, Chester (I think he went by Chet), had a daughter about my age and I think my grandparents wanted me to have someone my age to spend time with during my summer vacations at the farm. 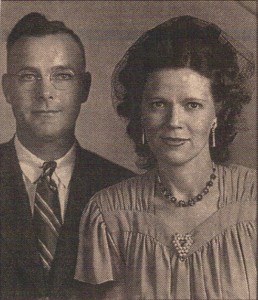 I didn’t know until recently that Laurabelle shared an interest in genealogy and I am fortunate to have a copy of a Hockensmith and Case family history that she wrote in 1981. I’ll share some of it here at a later time.

I remember her as she looks in the picture at the top of the post.

******
Does anyone have pictures, stories, newspaper clippings, etc. to share about Laurabelle?