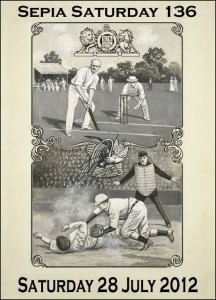 Sepia Saturday provides an opportunity for genealogy bloggers to share their family history through photographs. Today’s prompt coincides with the first full day of the 2012 London Olympics and features two sports you won’t see – cricket and baseball.

I had fun going through my collection of photos to add to the list of sports you will not see in the Olympic games. 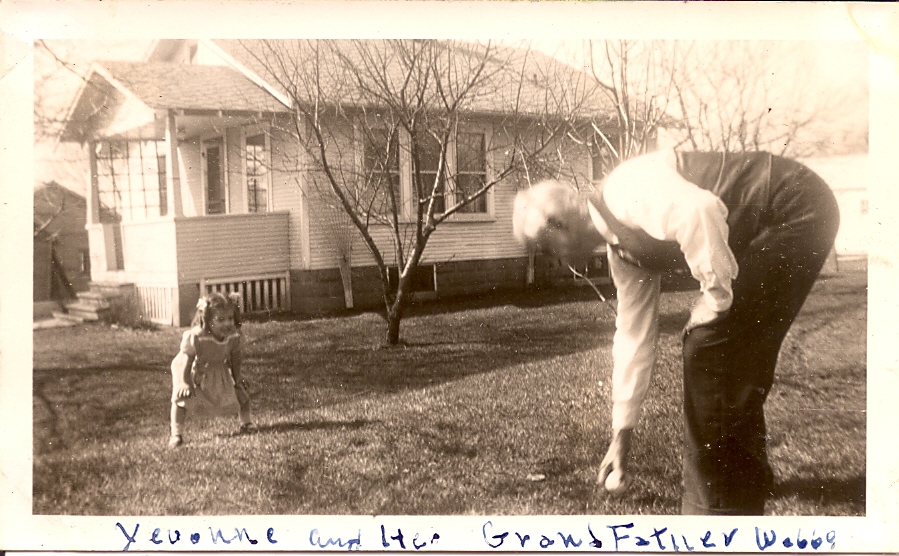 This first photo is of my great-grandfather, Myron David Webber, playing catch with one of his grandchildren. It looks as though Yvonne’s coach has taught her the “ready” stance – knees bent, eyes on the ball, ready to catch the ball at a moment’s notice. 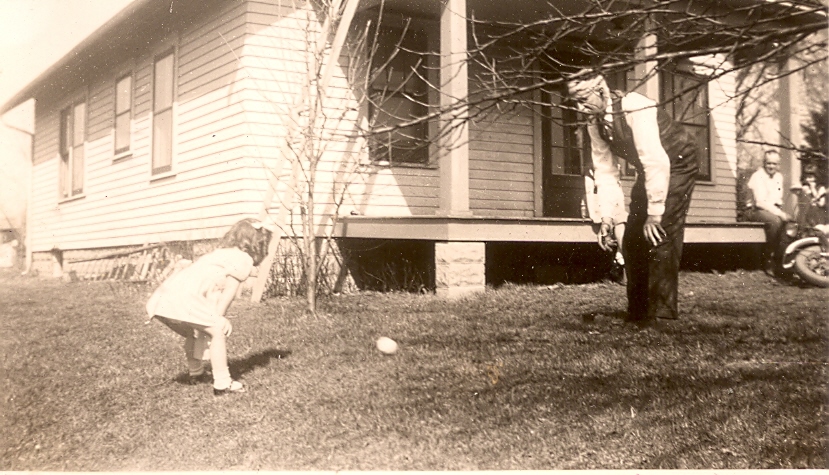 And here Yvonne is intently watching the ball …. not moving forward to catch it.  My mistake – the sport of Ball Watching, not Catch. 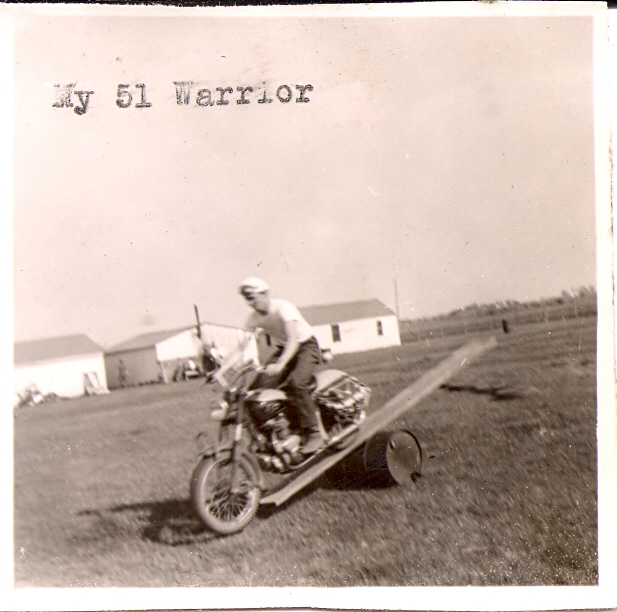 What can one say about such creative sporting? 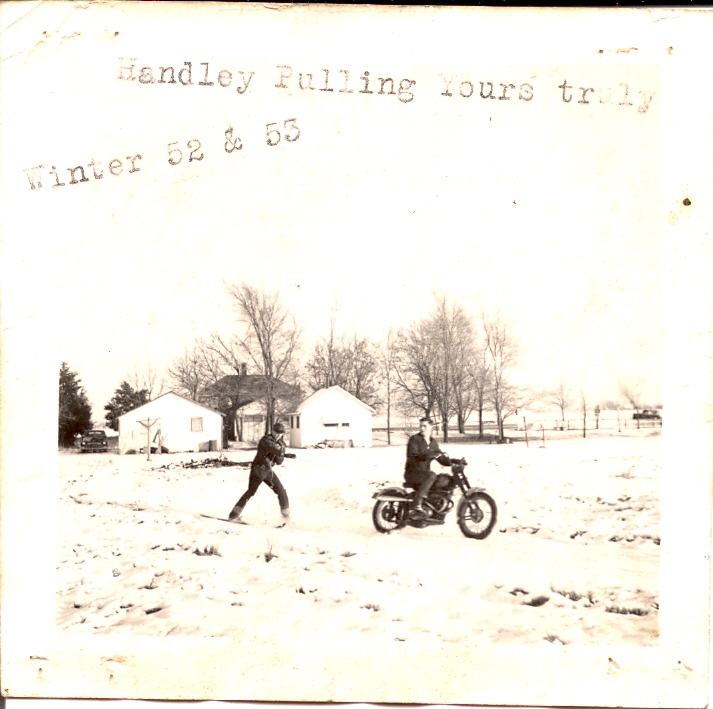 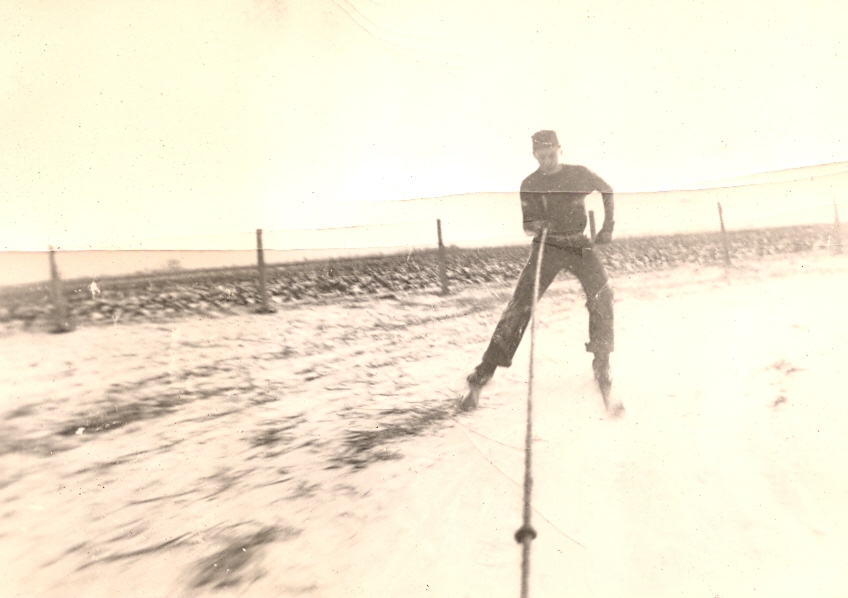 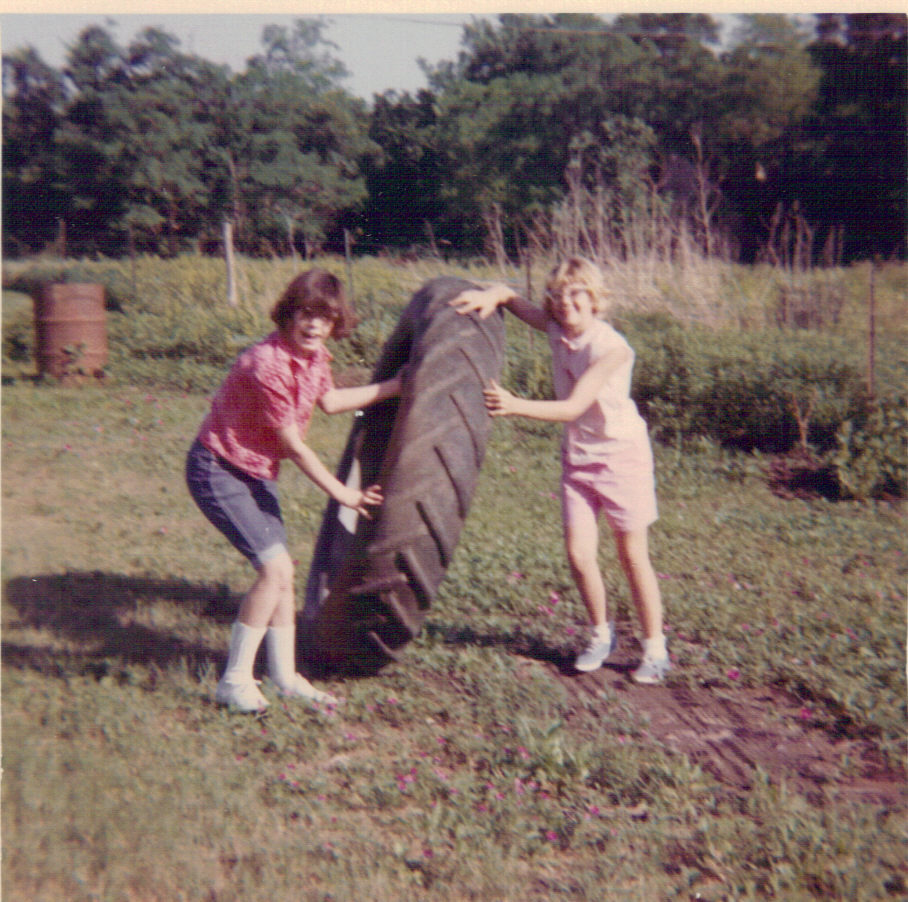 Charlene and Me on the Farm

What sports did your family play that won’t be seen in the Olympics this summer? 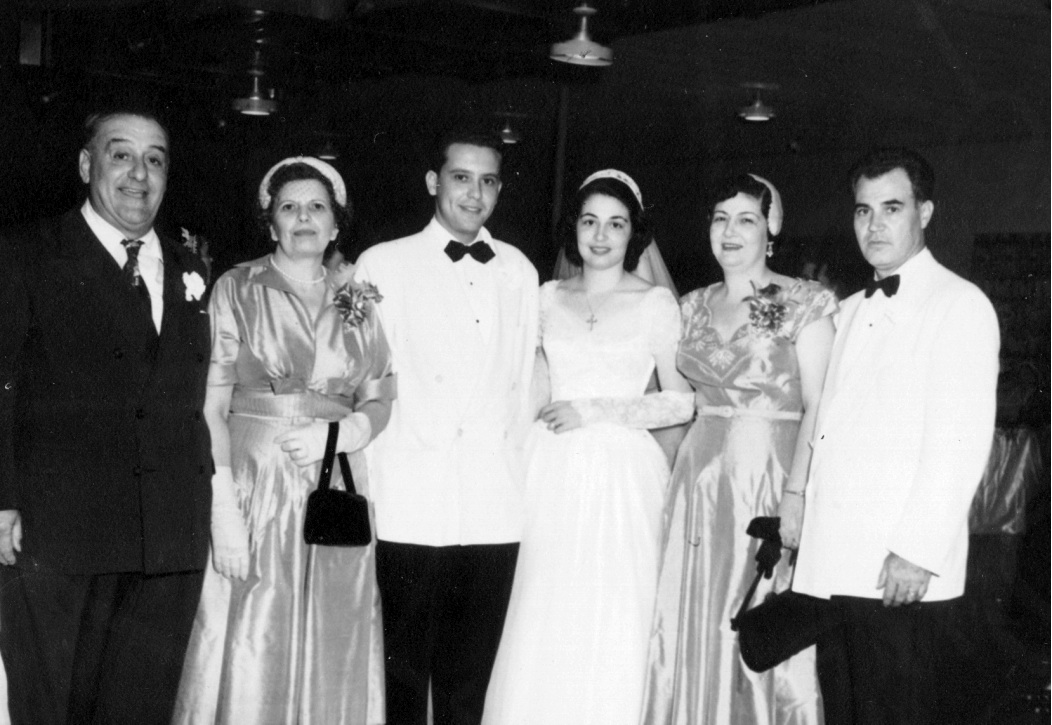 Today marks the 60th wedding anniversary of my husband’s parents. They were a lovely couple on their wedding day July 27, 1952. Unfortunately, his father is no longer with us to celebrate. 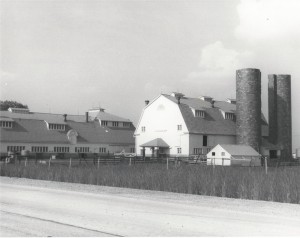 It seems like I ate a lot of meat during my recent visit to Iowa. Beef and pork – not just corn and soybeans – are raised on those rolling green hills.

Of course I ate a BBQ sandwich during Hedrick Barbeque Days – I’m pretty sure that was mandatory. The BBQ was tasty, but not the same as barbequed beef served in Texas.

And in a week’s time, I ate not one, but two loose meat sandwiches. I had forgotten the name, but when we met again, I remembered my old friend Loose Meat Sandwich aka Maid-Rite aka Canteen.

No matter the alias, Loose Meat Sandwich can be identified by these characteristics:
Ground beef – often finely ground, but in all cases with no chunk
No sauce – Loose Meat should never be confused with Sloppy Joe.
Hamburger bun
Little evidence of grease – Loose Meat frequents a steam bath to lose unwanted fat
Dressed in waxed or other food paper – bottom half covered, but top usually uncovered  Often accompanied by a spoon – to catch runaway loose meat
May be in the company of pickles and mustard and sometimes catsup
Never accompanied by mayo or lettuce or tomato 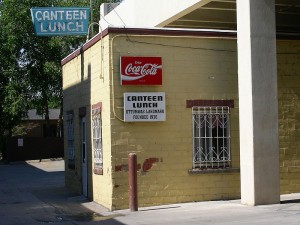 My memories of loose meat sandwich are most associated with the Canteen Lunch in the Alley, a little diner in Ottumwa, Iowa. My mom worked at the Sears store in downtown Ottumwa and she would occasionally take me to lunch at the Canteen. What a treat! The Canteen’s front door was in an ally and there was limited seating at a counter inside. Not  much on the menu other than the Canteen – their version of the loose meat sandwich, milk shakes, pie. I don’t remember fries, but maybe there were. I saw a picture on Flickr of a menu from a couple of years ago and it is a little more extensive than my memory, but not by much.

The city wanted to build a parking garage on the site where the Canteen stands, but amid protests from loyal customers, the Canteen was left standing and the garage was built around it. The Canteen has been in the same location since 1936. I am sad to say that I did not have time to eat at the Canteen on my recent visit. My loose meat sandwiches were consumed at BBQ Days and at a local truck stop.

There are some recipes on the internet for loose meat sandwiches, but I just don’t believe they would be the same. We don’t have steamers or tilted cook tops in our homes. So instead of sharing one of those recipes, I’ll share the simple, but not traditional Sloppy Joe recipe that my mom often made.

Brown a pound of ground beef, breaking up into small pieces as it cooks.
Drain off fat.
Add a can of Campbells Chicken Gumbo Soup.
Cook, stirring occasionally, until heated through and liquid has cooked off. 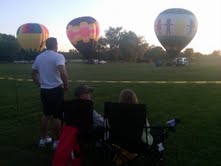 And while I have you here, I’ll just go ahead and tell you that I revisited another old favorite while I was in Iowa – the Pork Tenderloin Sandwich. My Grandma Abbie served them in the truck stop cafe that she and my grandfather ran at the Hedrick Y and I loved them. I tried one from a food truck at the Ottumwa Pro Balloon Races. Not as good as Grandma’s, but reminiscent.