I’m currently researching and writing about how my families were impacted by epidemics, pandemics and other health crises, starting with the 1918-1919 Influenza Epidemic. First was Woodye Webber, followed by Lizzie Strange. Now, Jesse James Bryan. I’m still collecting information on him, so I’m only telling part of Jesse’s story today.

I first encountered Jesse James Bryan in the pages of the George Washington Bryan and Sarah Stokes family Bible. He was an Independence Day baby! 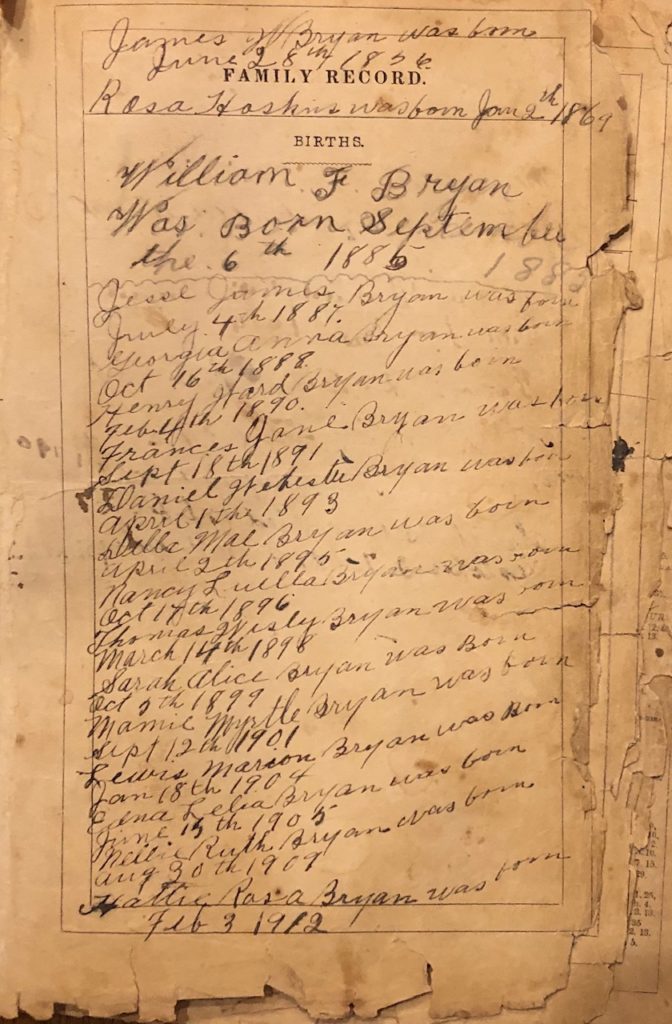 Jesse is also found on an otherwise blank page of the bible.

And there is a Joe Bryan with the same information on the Deaths page. 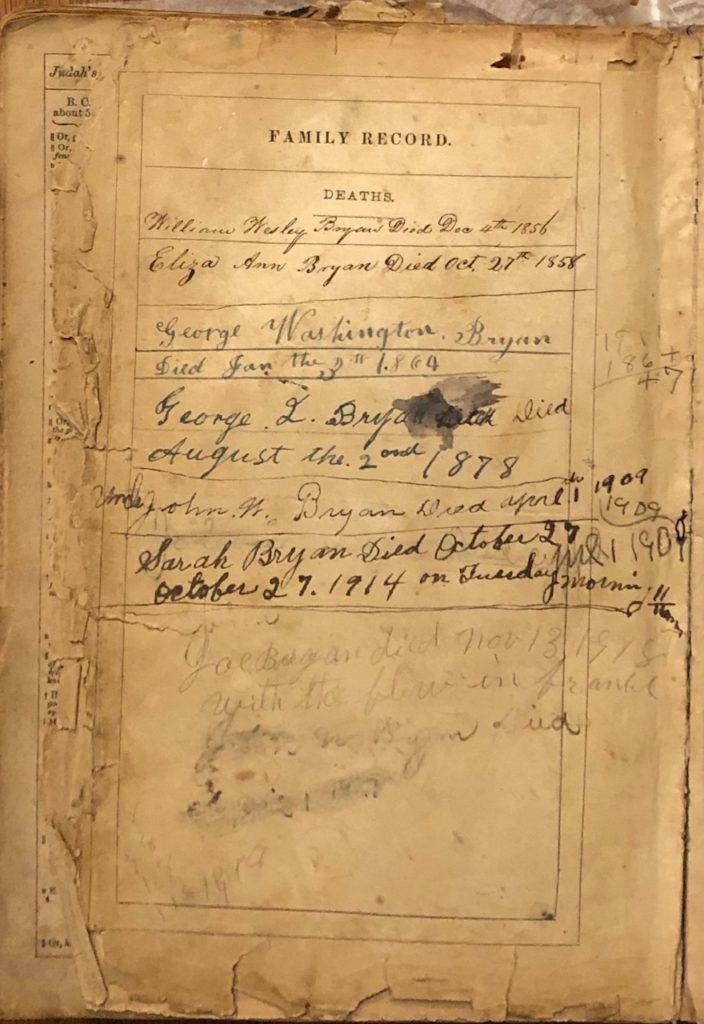 My mother had a few photographs from her father’s family and had identified this photo as Joe Bryan, Aunt Rose’s son. It took me a while to figure out that Joe and Jesse James were the same person, but the bible confirmed it. 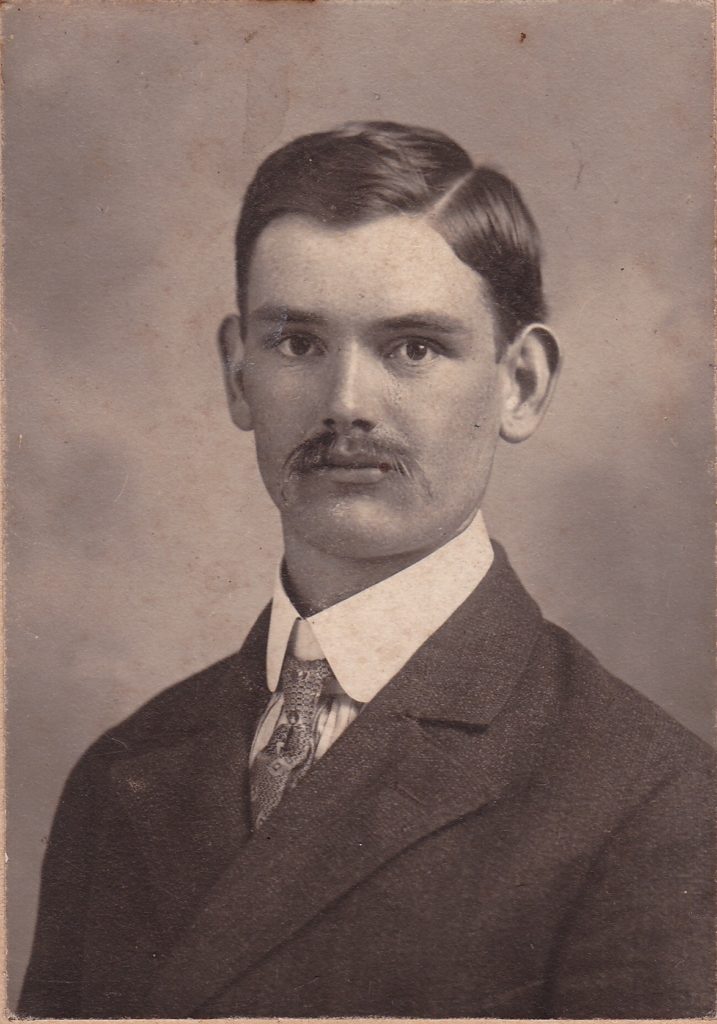 Jesse, or Joe, Bryan was born in Drakesville, Iowa, the second of fifteen children born to James Washington Bryan and Rosa Luella Hoskins. Joe was first cousin to my grandfather Thomas Hoskins. In fact, he was Grandpa’s first cousin on both sides of the family. Joe’s father, James W. Bryan was the brother of Grandpa’s mother Sarah Elizabeth Bryan. Joe’s mother, Rosa (Rose) Hoskins, was the sister of Grandpa’s father Thomas Franklin Hoskins. My mother remembered going with Grandpa to visit Aunt Rose many times, so I’m assuming the families got together fairly frequently when Joe and Grandpa were growing up, despite not living in the same town – especially with the double family connection.

Jesse (from here on I’ll use his given name) is listed in the 1900 US Federal Census with his extended family on a farm in Davis County, Iowa. In the home are Jesse’s parents, his grandmother Sarah Bryan Hoskins, his uncle John Bryan, and nine siblings who range in age from fourteen to four months. Jesse, twelve, and his older brother William, fourteen, are listed as farm laborers. Only sister Georgia, age nine, attends school. The growing family is documented again in the 1905 Iowa State Census in Davis County, Iowa.

I was confused when I saw that Jesse registered for the draft in Calumet, Iowa because it is so far from Drakesville. But it also says that he was employed by Ed Heinel in Paullina, Iowa, which is in the same county as Calumet. 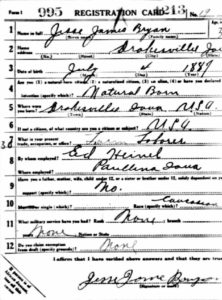 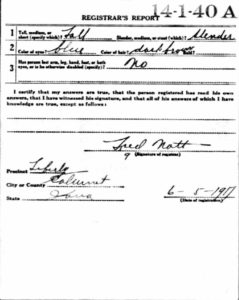 That sent me looking for Jesse and his brother William, who are not listed in the 1910 Census with the rest of the family. I found them together on a farm in Humboldt County, Iowa.

William, 24, is listed as a farmer and head of household. Brother Jesse, 21, is listed as “working out” – earning income working on other farms. William didn’t register for the draft until September 1918 in Pocahontas County, Iowa and at that time listed his mailing address as a P.O. Box in Laurens, Pocahontas, Iowa. So it seems that the two older brothers had left the family farm before the 1910 census and were in northern Iowa by at least 1917.

Jesse registered for the draft on the first national draft registration day, June 5, 1917. The recently enacted Selective Service Act of 1917 required all men between the ages of 21 and 30 to register in order to raise an armed service sufficient for participation in the war. Jesse was not immediately called into service, so I’ll assume he just went on farming and working while waiting and listening to news of the war.

Jesse’s Army record of death provides the date of his enlistment – July 23, 1918, a little over a year after he registered for the draft. 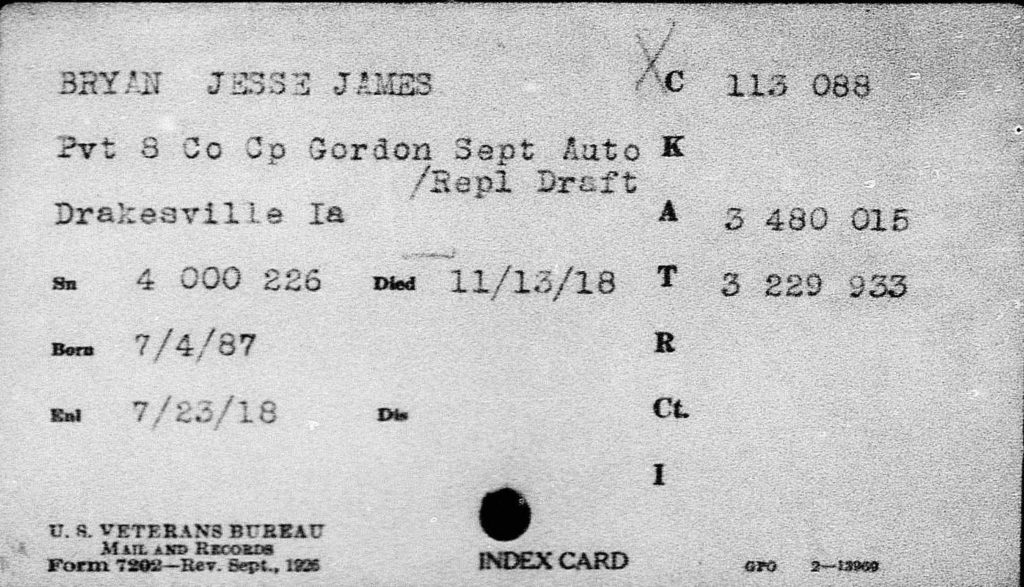 I went to the internet looking for information about Camp Gordon this week and found a man in Atlanta whose passion is researching Camp Gordon, among other things. I saw an email address for him and decided to contact him with some questions I was trying to answer. He responded within minutes, offering his phone number so we could talk. With his help, I think we put together most of a timeline, some interesting context, and some suggestions to help my research.

From our phone conversation, I learned that the enlistment date of July 23 makes perfect sense because the large 82nd Airborne Division left Camp Gordon in late April, leaving plenty of room for new recruits. Jesse would have received his orders and boarded a train bound for Georgia, presumably arriving on July 23, 1918. Jesse got off the train at the “back door” to Camp Gordon in Chamblee, GA, walked across the railroad tracks, and waited for his turn to be processed. I wonder if this undated photo taken at Camp Gordon depicts what it was like when Jesse arrived. At its peak, Camp Gordon held 46,000 troops. It was a small city. 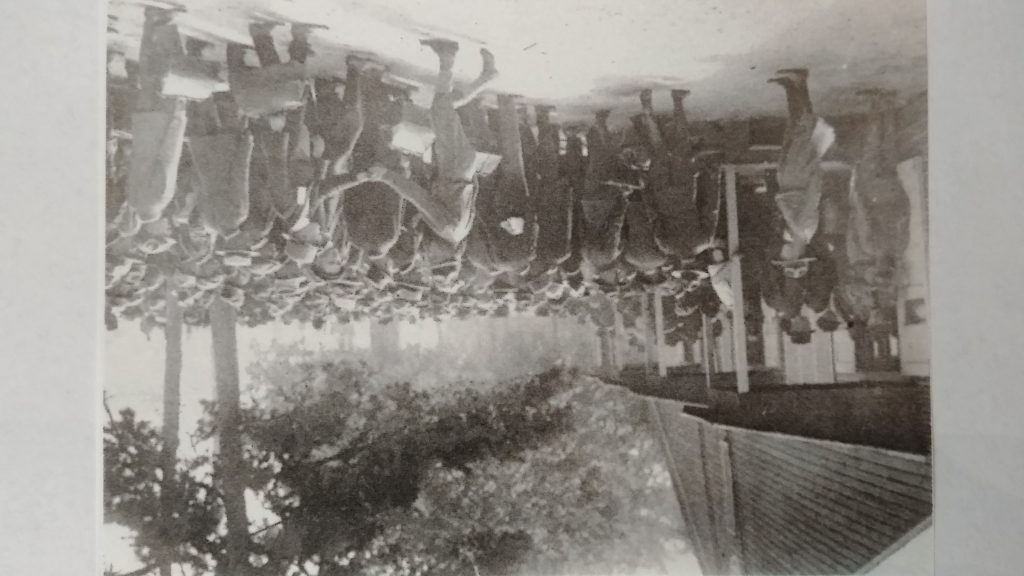 Iowa sent 6,440 recruits to Camp Gordon during the course of the war.

I’ll stop here for now with my link to the prompt photo. Jesse was able to go home on furlough before he went overseas. His youngest sister, Hattie, was just a little girl at the time. She didn’t really know her brother, since she was born in 1912 – after Jesse had moved away from home. Hattie told her daughter that she was in the yard swinging when he arrived and introduced himself to her. If she had met him before, she didn’t remember.

Maybe Jesse also enjoyed some time with old friends during his furlough. 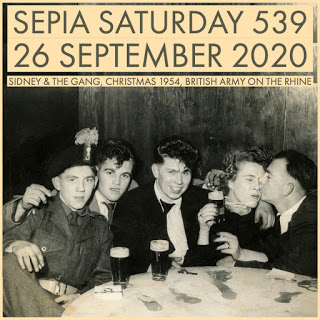 For a good time visit other participants at Sepia Saturday.

I was going along pretty well here, writing about my recent trip to Iowa. Then came the maddening, frustrating realization that I experienced a major technical failure on this particular day of my trip. It was my own un-techy fault. Unprepared. Ill equipped. Lacking knowledge. So I stopped writing mid-trip. Really, I am so bummed out about it. Nevertheless, it was a lovely day! Here goes … 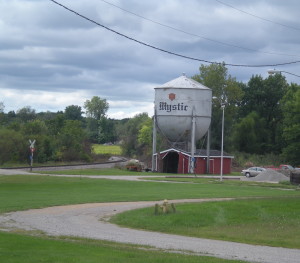 When I was in Iowa four years ago, my Uncle Roy wanted to take me to Mystic, the town where he and my mom and their siblings were born and spent their early years. I ran out of time during that visit, so I made sure to reserve a day for a trip to Mystic this time.

Mystic, and the rest of Appanoose County, experienced a boom during the late 1800s and early 1900s because of coal mining in the area. Later, the mines ran out and many of the towns are now a mere shadow of what they once were. For today, we’ll just focus on the trip and I’ll hope to write more about Mystic and the lives of my family there another day. 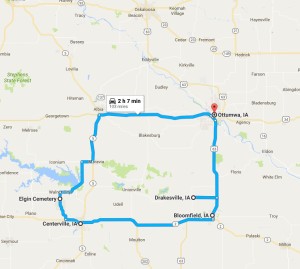 Thankfully, I had swapped out the two-door hatchback for a four-door sedan so that Uncle Roy, Aunt Joan and I could travel in relative comfort. I picked them up at their RV in Ottumwa Park and we were on our way mid morning. I was so thankful to have Uncle Roy as my navigator and tour guide.

The first stop on our trip was Elgin Cemetery in Mystic, where members of my Hoskins side of the family are buried. My great-grandmother’s stone was easy to find. 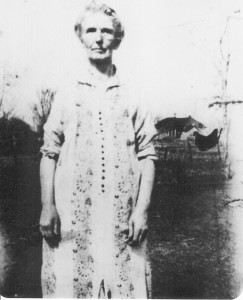 Prepare to meet
me in Heaven

Her daughters were buried nearby. 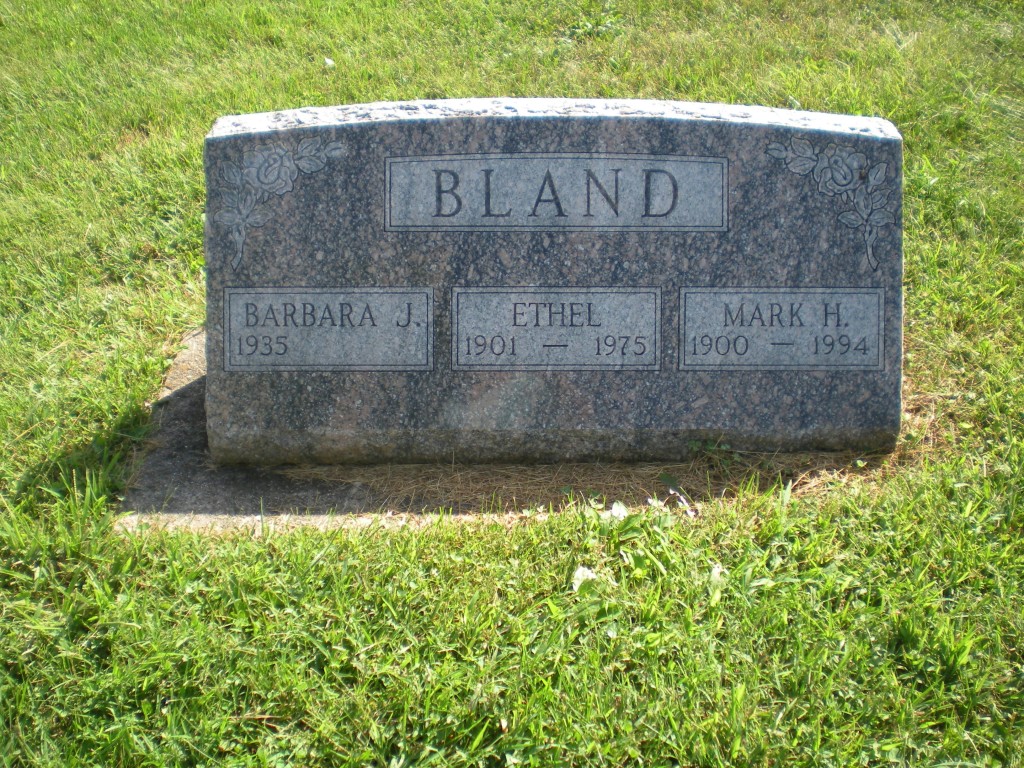 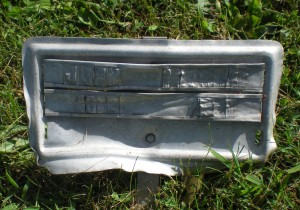 But where was her husband?

We looked and looked for Thomas Franklin Hoskins, but he was nowhere to be found. His death certificate confirms that he should be here, but we could not find even an indentation or tiny mark where an unmarked grave might be. Just to the left of Sarah Hoskins’ marker was a small metal marker. It is difficult to read, but I think the name is Morlan and other Morlans are nearby.

There are a lot of Sticklers and Milburns buried in Elgin Cemetery – both family lines that married into my family tree, so I took pictures of their markers as well. There were a lot of old stones that were impossible, or nearly impossible, to read. Someone had taken black paint to preserve the names on the old Stickler markers. I know this is frowned upon, but I do understand the motivation. The names on those stones were not long for this world.

Taking pictures of grave markers always seems to be a challenge for me. Here is one of my photo fails. Like my big yellow bag? 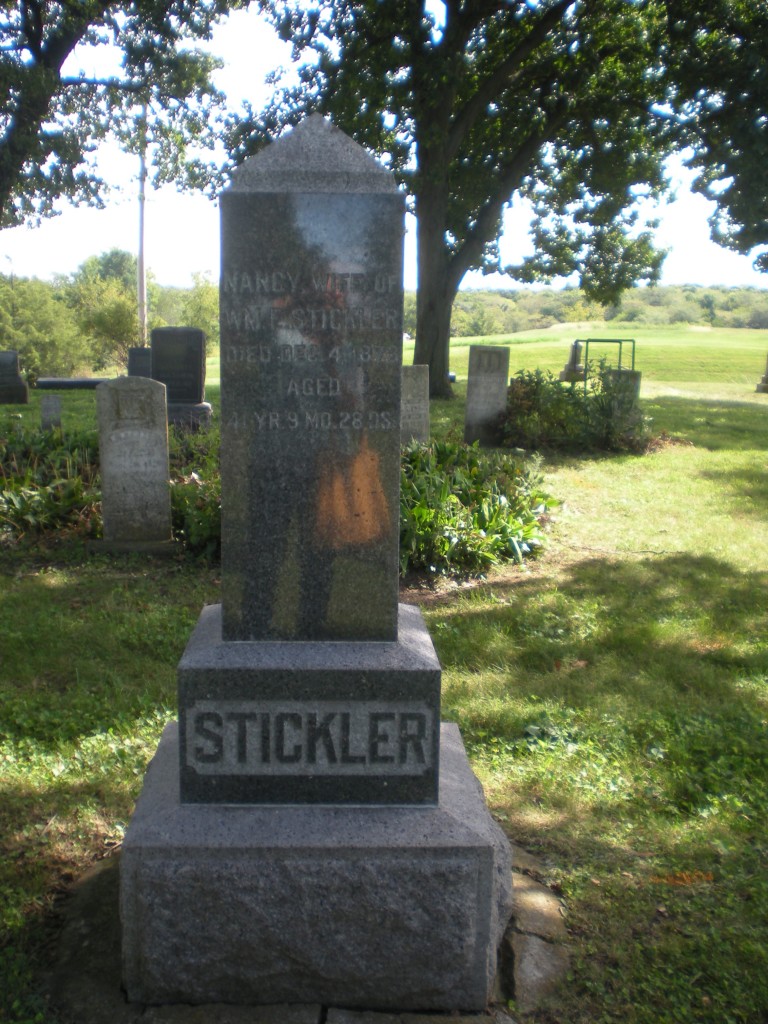 I found this short video someone took at Elgin Cemetery. It doesn’t show the part of the cemetery where our family is buried, but gives a view of the landscape.

I’m just going to stop here and write about the rest of my day in Appanoose County in another post ’cause I’m still bummed about what happened next.

P.S. You can enlarge small photos by clicking on them.

To Do List:
Find the location of great-grandfather’s grave in Elgin Cemetery. Thomas Franklin Hoskins.

It took me a while to realize I had the Bible in my possession.

I had borrowed lots of pictures and papers that belonged to my Coates/Hoskins grandparents from my mom’s house. I was new to genealogy, and wanted to dig in and see what we had. I sorted though letters, pictures and other papers, putting them in page protectors and attempting to put them in some kind of order. I set books, Bibles and other odd-size items aside, put them in a box and ….. forgot about them.

I had seen the George Washington Bryan Bible referenced several times by other Bryan researchers and sometimes my grandfather, Thomas Hoskins, was named as the person who was in possession of the Bible and who had provided the information. I wondered what had happened to the Bible.

Time passed – probably a couple of years – and then one day I pulled out some of Grandma’s things again and found a big old Bible. It was in terrible condition – no front cover, stained, torn, falling apart. I was sure I had already looked through this Bible seeking clues. But this day I decided I had better look again. 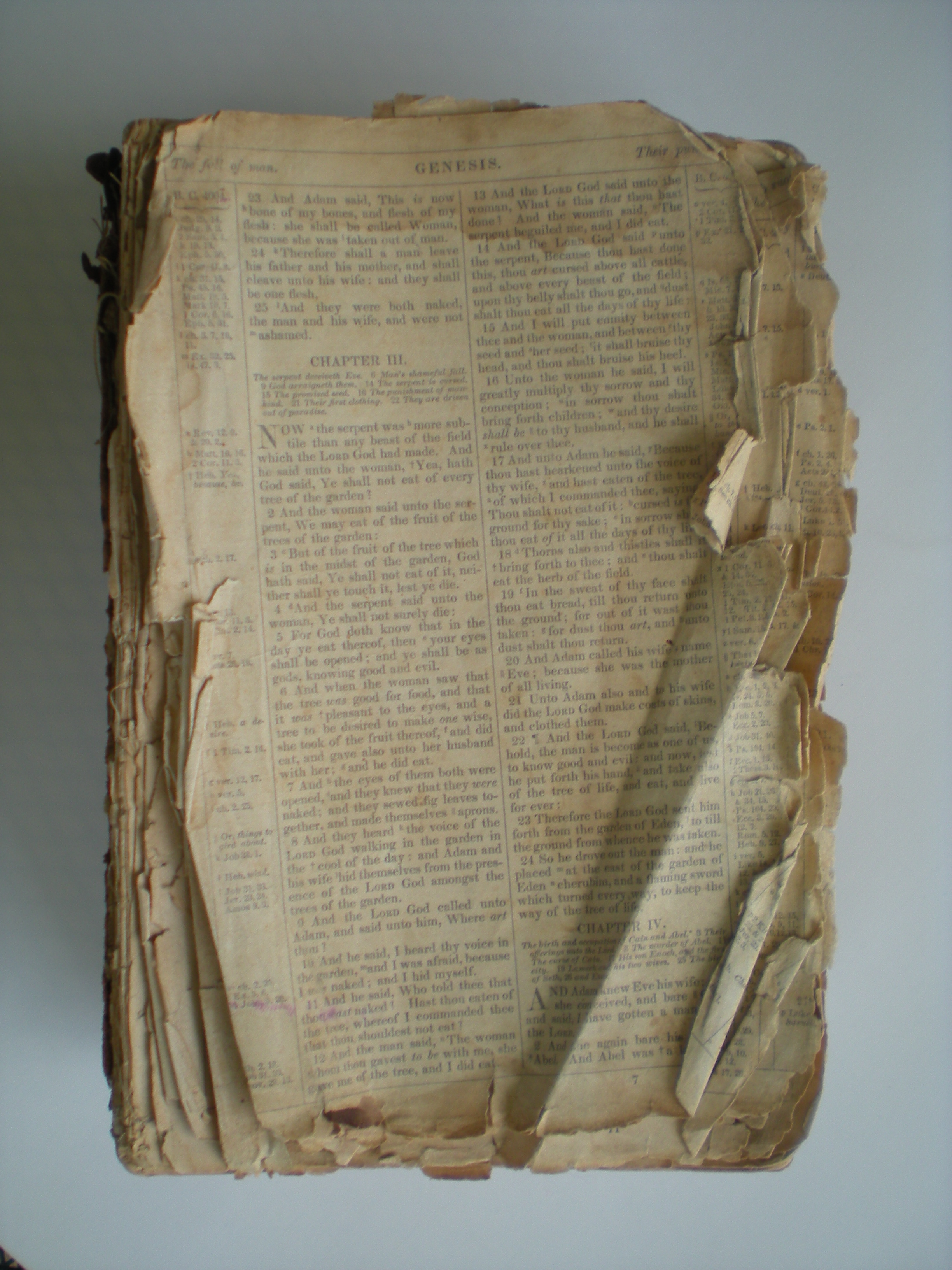 Not a very pretty treasure, but there was gold inside. 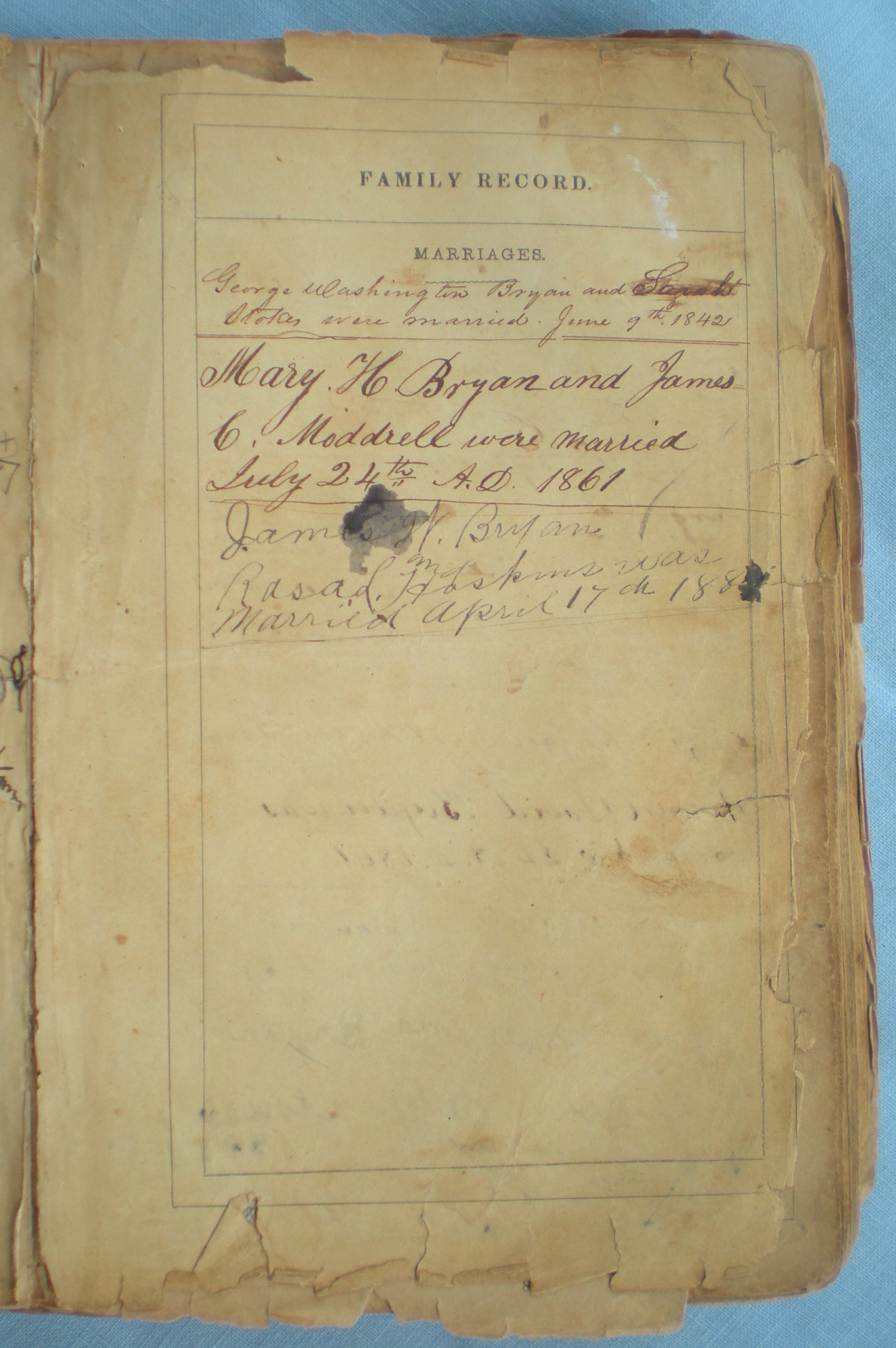 There it was – the George Washington Bryan Bible – right in my grubby little hands.

George Washington Bryan was my 2nd great grandfather. I have never seen a picture of him, but it is my belief that the loveliest handwriting in the Bible belongs to him.

George Washington Bryan was born April 1, 1819 in Christian (now Todd) County, Kentucky, the 3rd of 12 children born to John Franklin Bryan and Hester Jane Westfall. He married Sarah “Sally” Stokes on June 9, 1842. The youngest of their 11 children, Sarah Elizabeth Bryan, was my great grandmother. My mother was about nine years old when Sarah Elizabeth died, and she doesn’t really remember her.

The front cover and the pages that follow are missing. The first page I have is page 7. Thankfully, the New Testament has it’s own “cover” page which dates the publication of the Bible to 1854 by the American Bible Society. 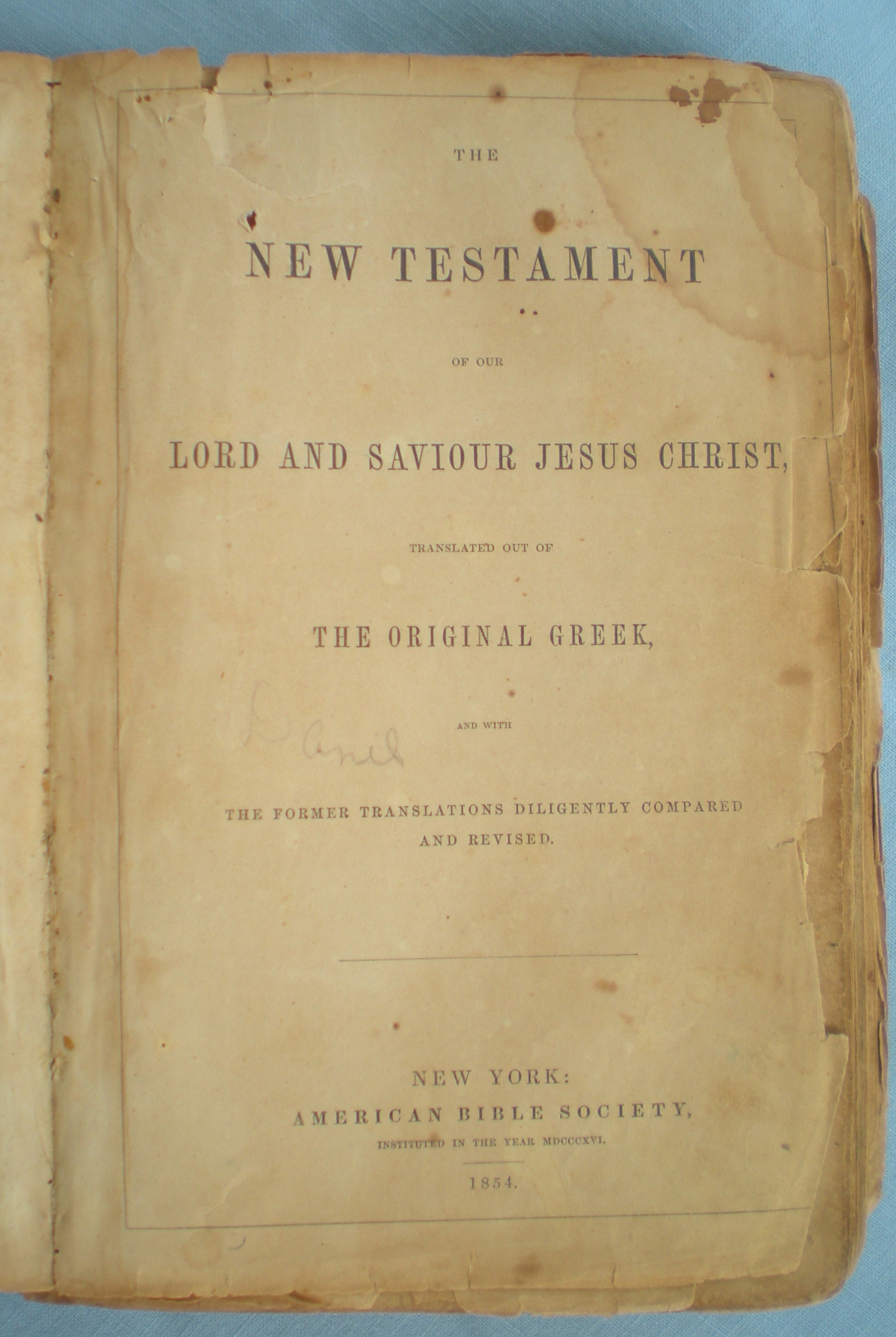 I don’t know how my ancestors came to be in possession of this Bible. They probably arrived in Ray County, Missouri in the spring of 1854. Right now, I’ll just assume that they received it after their arrival in Ray County as that seems most likely. The American Bible Society was expanding its reach in the rural areas of Missouri at the time. Something else to look into…

There are still the remains of the back cover and spine. It appears to be embossed leather. 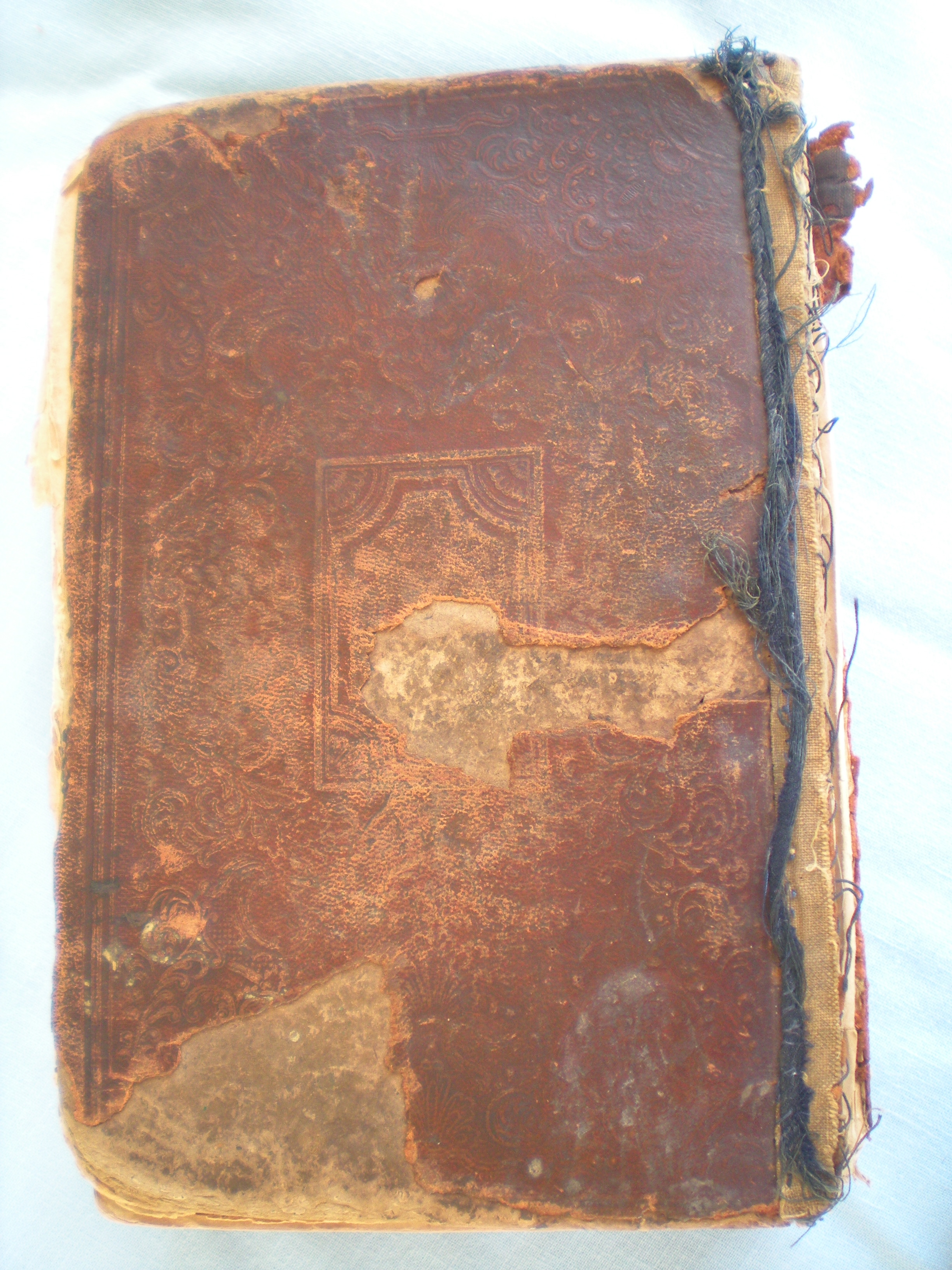 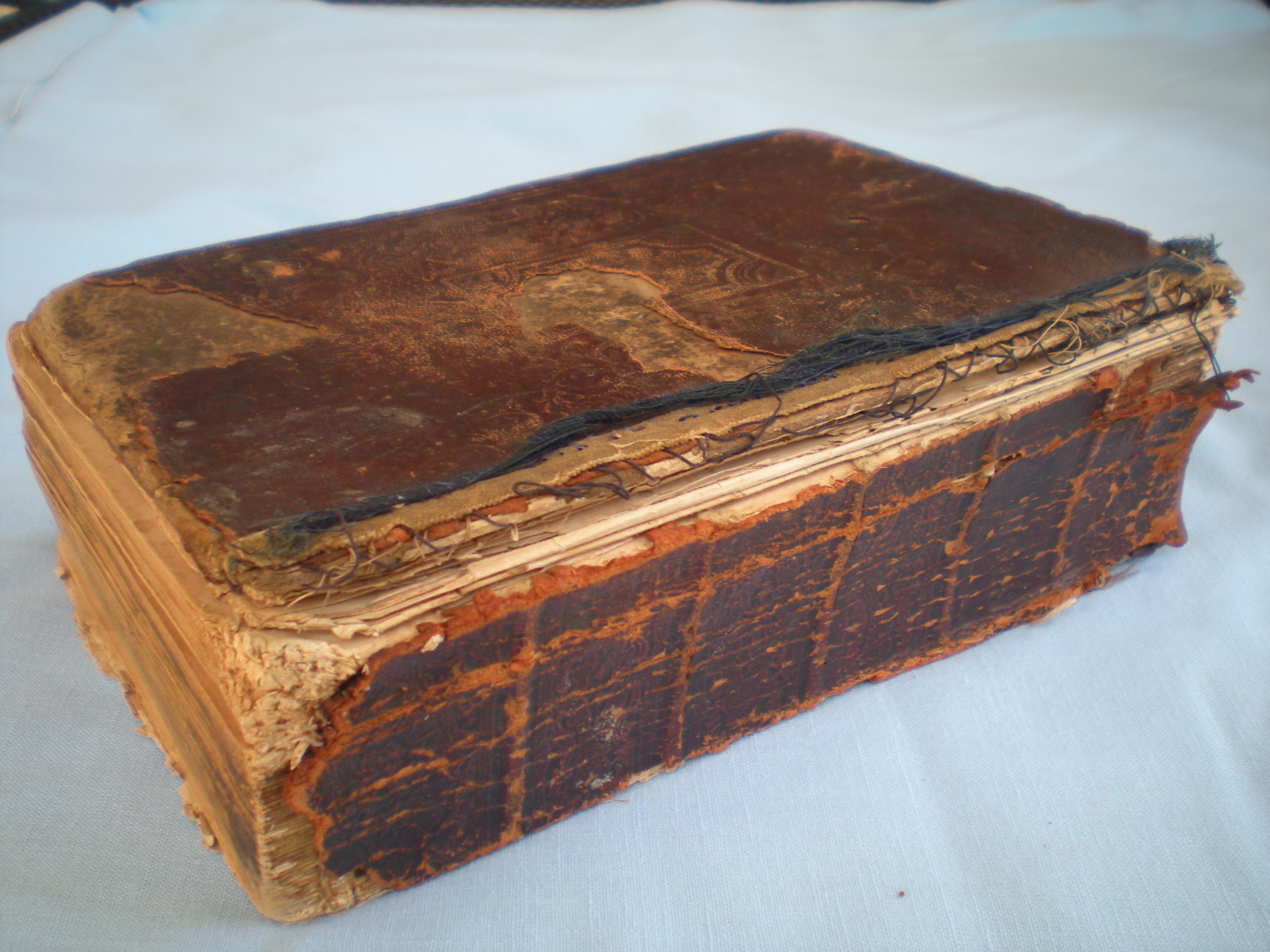 What lurks inside the pages of the Bible? I tried to document it all and will share in the next few days.