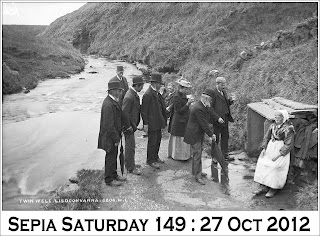 Oh my. Two Sepia Saturday posts in one weekend!

What to do with today’s prompt? Kat Mortensen (chooser of the prompt) tells us that this picture is of “Twin Wells” on the banks of the River Aille at Lisdoonvarna in County Clare, Ireland, taken around the turn of the century (1900). The waters were acclaimed as restorative and this place was designated a spa. (My image won’t enlarge; if you’d like a better look, go here.)

To be honest, I don’t understand this picture. What in the heck is going on? The poor woman on the right hardly looks real. What is that “shelter”? Why are these people standing around in their nice clothes and hats in front of this woman? It’s a mystery to me.

I was thinking about this prompt while trying to go to sleep last night. The woman sitting on the right led me to think about a picture of someone in my family. Both images portray women whom we would not consider attractive and whom we would assume lived a hard life.

Pictured below is my 2nd great grandmother, Sarah Stokes Bryan, at age 90. It is the only picture I have seen of her. Perhaps it was taken on her birthday? Sarah Stokes’ life in brief:
Born August 26,1821 and raised in Todd County, Kentucky.
Married June 9, 1842 to George Washington Bryan.
Bore 11 children.
Two children died before the age of 2 years.
Moved the family west to Ray County, Missouri in 1854 as troubles over slavery brewed in Kentucky. They found themselves in the middle of trouble in Missouri as well.
Husband joined the Missouri Enrolled Militia July 28, 1862.
Husband relieved from duty February 9, 1863 due to illness (pneumonia and tuberculosis).
Moved family to Davis County, Iowa.
Husband, George, died January 3, 1864.
Gave birth to 11th child, Sarah E. Bryan (my Mom’s grandmother), February 27, 1864.
Remained single, raised her children and managed her farm.
Died October 22, 1914, at the age of 93.

Sarah’s sister, Nancy, had married George’s brother, John. Both families made the move to Missouri and lived together for a while, but Nancy and John remained in Missouri when Sarah and George moved to Iowa. Nancy gave birth to her first child in 1850, twins in 1851, followed by 6 more babies. As told by George in a letter to his brother Francis, Nancy was in poor health after giving birth to her 4th child. 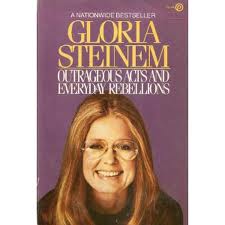 While writing this, I was also reminded of something I read many years ago, so I looked it up. It was from the essay “In Praise of Women’s Bodies” from Gloria Steinem’s book “Outrageous Acts and Everyday Rebellions”.

I stole her title. I hope she won’t mind!

Here are some of Ms. Steinem’s words:

…Stretch marks and Cesarean incisions from giving birth are very different from accident, war and fight scars. They evoke courage without violence, strength without cruelty, and even so, they’re far more likely to be worn with diffidence than bragging. That gives them a bittersweet power, like seeing a room where a very emotional event in our lives once took place.

…. Childbirth is more admirable than conquest, more amazing than self-defense, and as courageous as either one.

…Perhaps we’ll only be fully at ease with ourselves when we can appreciate scars as symbols of experience, often experiences that other women share, and see our bodies as unique chapters in a shared story.

When you first saw this picture of Sarah Stokes you may have thought, “What an ugly old woman!” I understand. That was my first reaction.

But now I see a survivor. A strong woman who earned every wrinkle through poverty, hardship, endless hours of working a farm, caring for her large family, grieving the loss of children, separation from her husband during time of war, nursing her sick husband and burying him, then bearing her 11th child after his death. And living to the old age of 93.

28 thoughts on “Sepia Saturday – In Praise of Women’s Bodies”