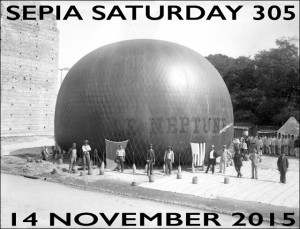 It has taken me until Sunday to think of a photo to fit this week’s theme: 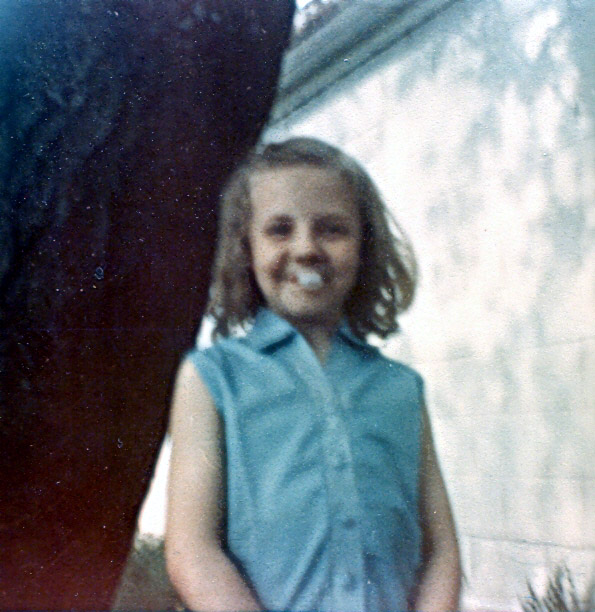 Me at the Hedrick Y. Taken by Grandma Abbie.

Me. Blowing my first bubble gum bubble. You might think it’s a bit of a stretch.

Let’s be honest. It wasn’t the first bubble I blew. I blew my first successful bubble, ran to tell my grandmother, who got her camera and we went back outside so I could blow another one for posterity. I don’t know how long she had to wait for me to master the correct form again and fill the stretched out gum with just a wee bit of hot air, but I did eventually manage to recreate the moment. And I look pretty pleased with myself.

Fly on over to Sepia Saturday to see what other bloggers have offered for the theme.

I’m diligently scanning and rescanning photographs originally in the possession of my grandmother Eveline Coates Hoskins – the ones sent by her relatives in England. I have not yet been able to determine how this beautiful baby fits into our family tree. 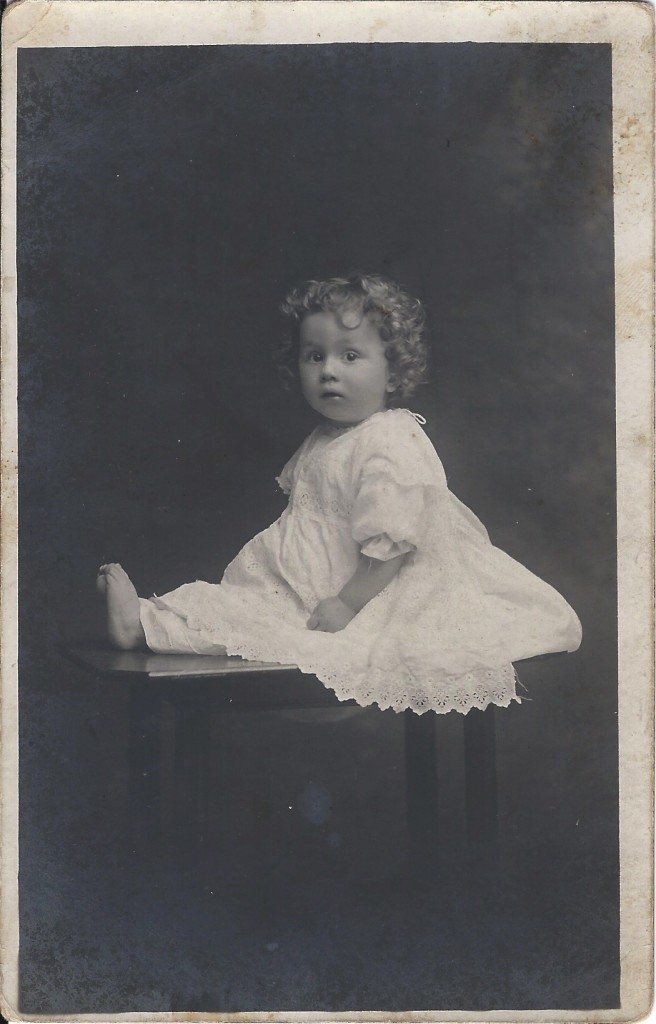 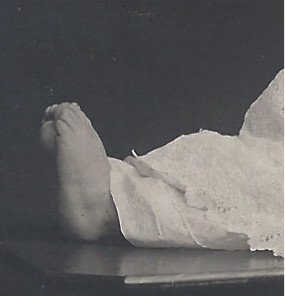 But who is this precious one? The back of the photograph provides a name and a date. 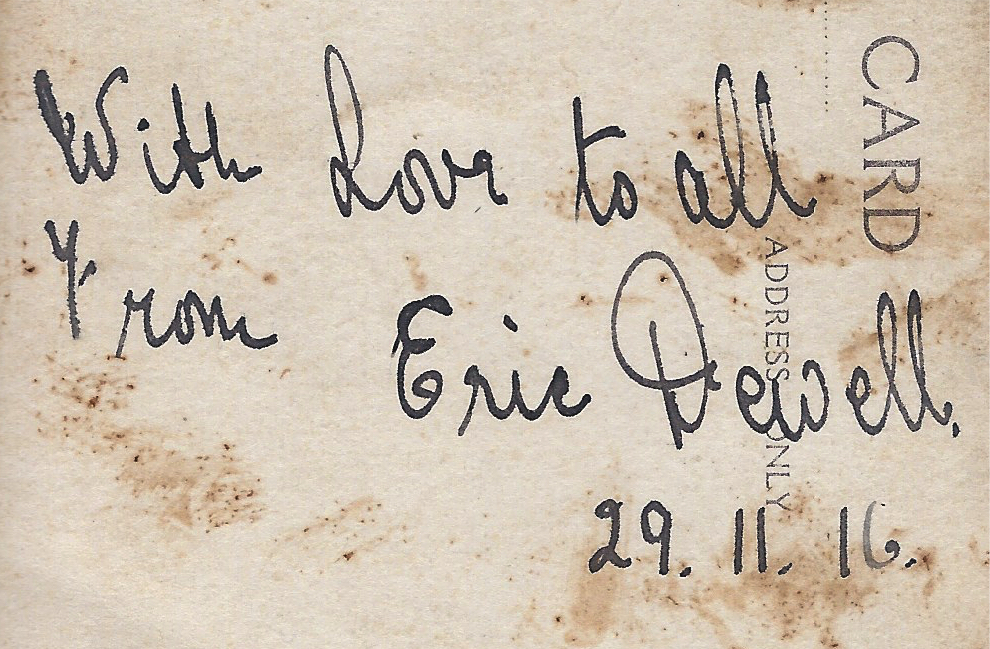 I haven’t run across any Dewells in the family tree. No Erics either – in the event Dewell is a middle name. 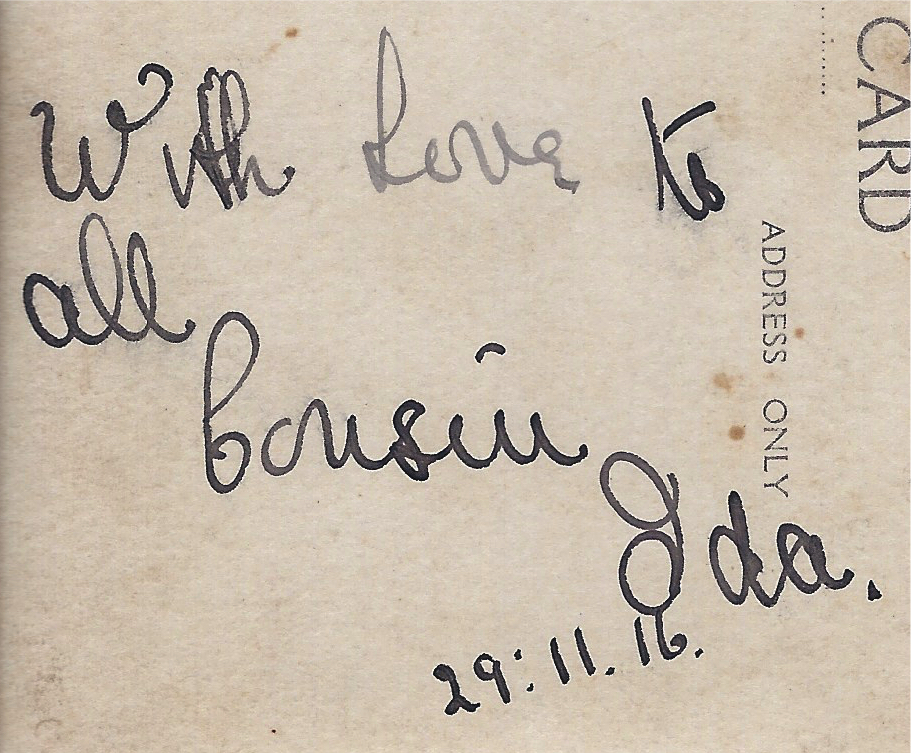 I know who Cousin Ida is. Ida Dawson is the daughter of Nellie (Mary Ellen) Coates Dawson and Robert Dawson. Ida was my grandmother’s first cousin. 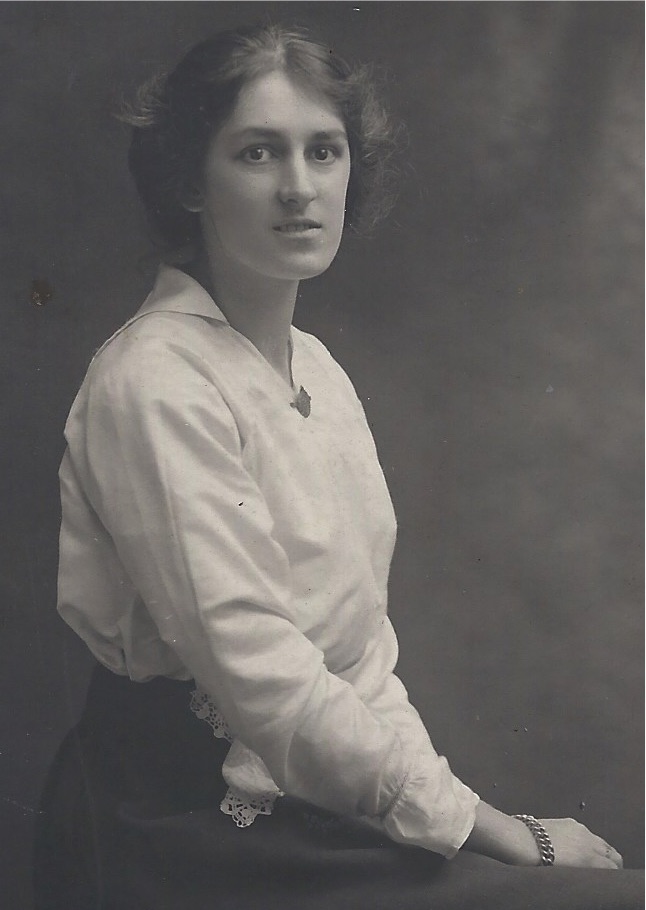 But who is Eric Dewell and what was his relationship to Ida? I’ll keep looking, but I’m sending this out and hoping someone can give me a little help. I’d like to claim this little one as one of ours. 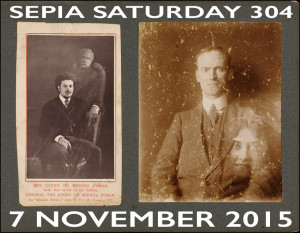 Today’s theme image invokes the idea of spirit images, double exposures, or other photographic manipulation. But my take today is a series of postcards that I believe my grandmother received from her cousins in England during WWI.

These postcards were published by Bamforth & Co. LTD. based in Holmfirth, West Yorkshire, England. Although more widely known for “saucy” postcards, the company also published postcards with war themes and song lyrics, among other genres. This is a series of three postcards based on the song “God Send You Back to Me.” Words by Douglas Furber; music by A. Emmett Adams; published in 1916.

Enjoy listening to the song while you peruse the postcards. If you go at a leisurely pace, you can follow along to the lyrics.

The first and the third cards in the series include an image of the one longed for. 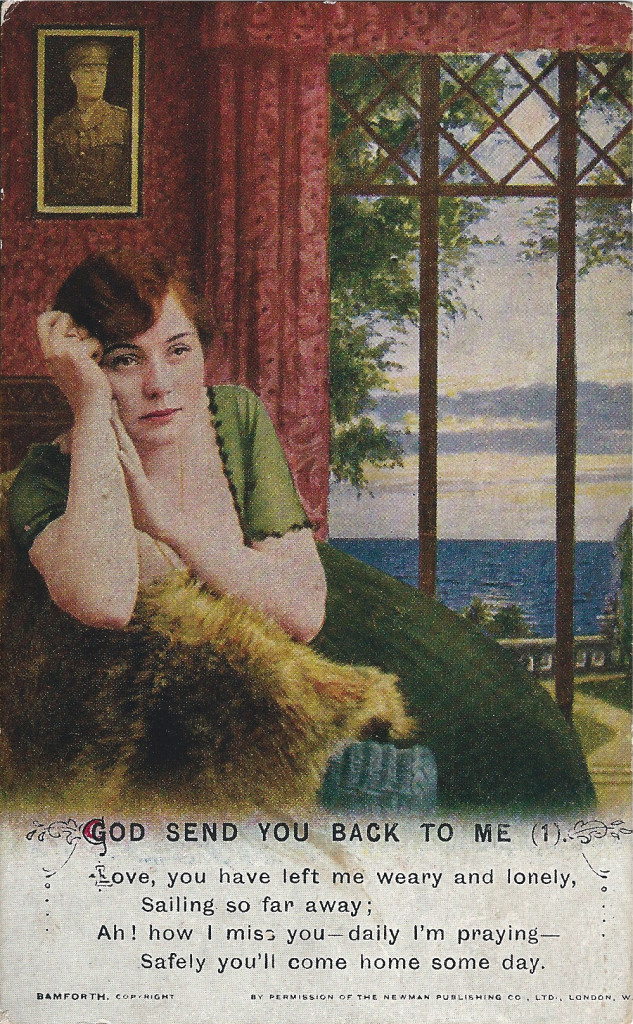 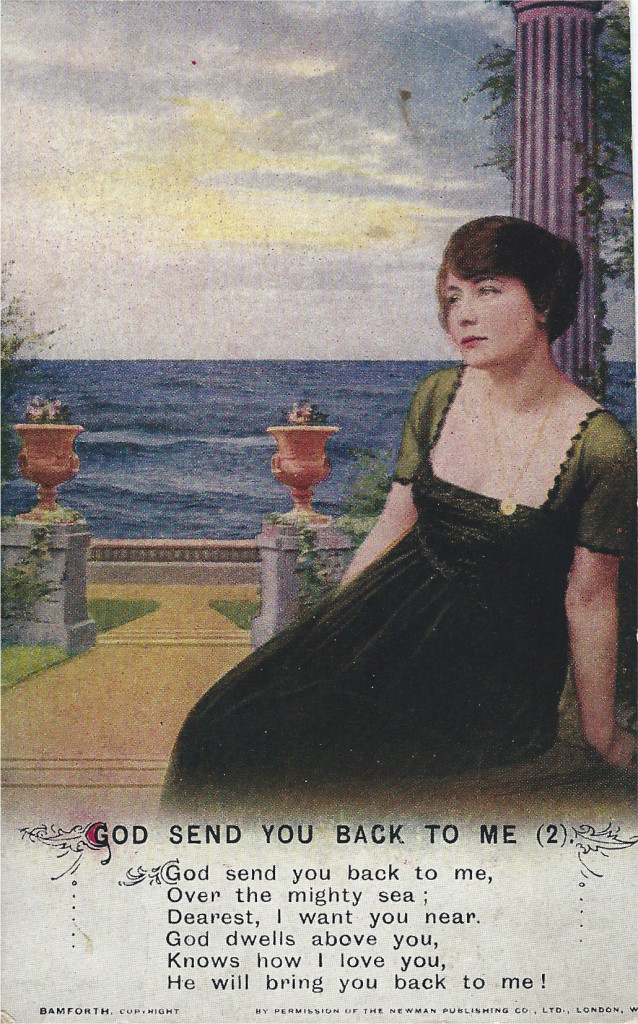 This third card is the one that reminded me most of the theme image. 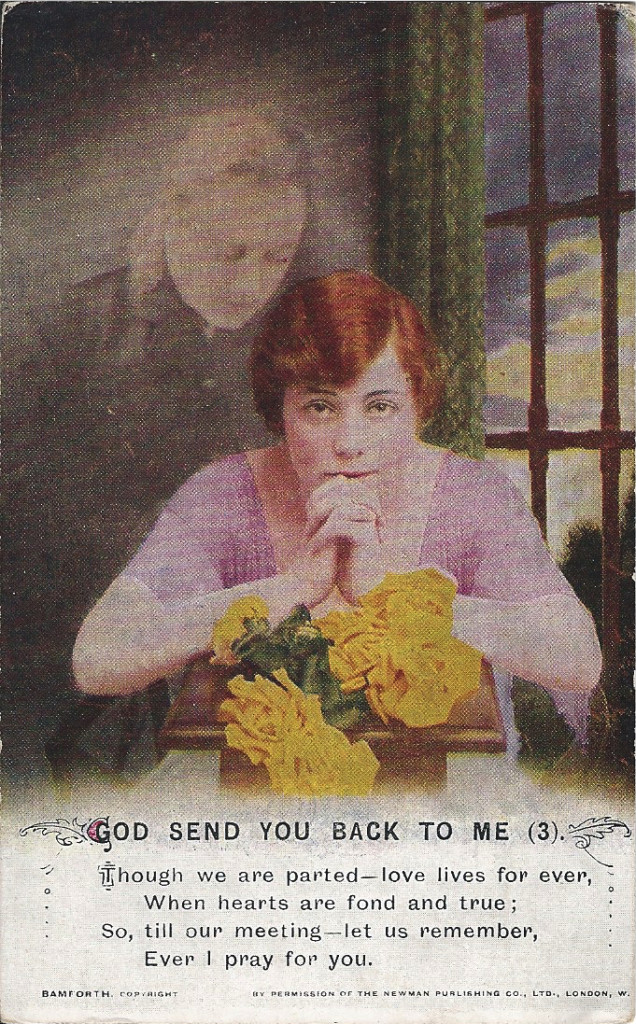 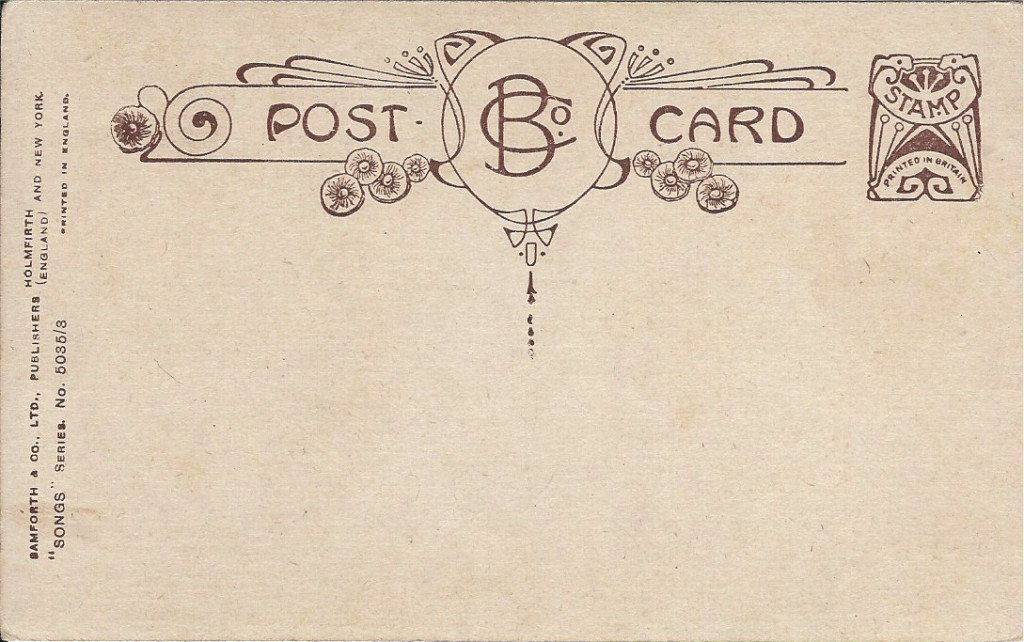 The songwriting duo of Adams and Furber is also responsible for the song “The Bells of St. Mary’s,” sung here by Bing Crosby in the movie of the same name.

If you would like a little more information about Bamforth Co., once known as the “British Hollywood of Silent Film,” you can follow the links here and here.

Please take a look at what other’s have done with today’s ghostly images at Sepia Saturday.