It is Independence Day weekend in the United States, which got me thinking about something my mother wrote about her childhood.

“We used to have family gatherings a grandma Coates’, especially holidays like July 4th. We would make home-made ice cream and grandma made root beer which was always cooling in the cave.“

Eveline was my mother’s mother and “grandma Coates” was Eveline’s mother. It made me wonder if Grandma Coates started making root beer for her own children and family when Eveline was a girl – possibly for the 4th of July in 1917 and 1918.

Unfortunately, we don’t have a family recipe for root beer saved among the recipe cards. But a quick google search led me to several recipes and images – mostly of advertisements and recipe booklets for yeast. Below is the cover and list of recipes from Fleischmann’s in 1917.

Fleischmann’s Yeast even included a poem about root beer in a pamphlet.

Root Beer, the finest summer draught
That ever slaked man’s thirst,
By grateful millions daily quaffed,
As made by matrons versed,
Owes all its life – and ’tis a feast,
To Fleischmann’s Peerless Compressed Yeast.

The Yeast Foam Company used this attractive ad and recipe.

In extremely hot weather use one-half cake of Yeast.

Dissolve the sugar in the water, add the extract, then the Yeast thoroughly dissolved in a little water, mix well and bottle immediately, using strong bottles or jugs, and tie the corks in securely. Set in a warm place thirty-six to forty-eight hours; in cold weather, a little longer. Then remove to cellar or other place of even temperature, but do not put it on ice until a few hours before using.

I’m tempted to give it a try, but maybe a smaller batch! McCormick has two recipes on their website – one that uses yeast and one that doesn’t, if you’re game.

This was also the time of the Temperance movement and root beer was promoted as a tasty alternative to alcohol. And in mining communities like Mystic, where they sometimes referred to their community as “little Chicago,” I imagine it was hoped that root beer would slake the thirst of hard working miners.

In August of 1917, shortly after the United States joined WW1, the United States Food Administration (USFA) was created to focus on food rationing for the greater good. Restrictions on sugar were especially pronounced. “Sugar Means Ships” stated one popular poster. While Eveline’s mother may have served her family root beer on July 4, 1917, it is less likely that she did for July 4, 1918. (More on food and cooking in a future post.)

My mother and her mother (Eveline) always loved ice cream. When my mom and I lived with Eveline and my grandfather Tom Hoskins, grandma would order her groceries to be delivered on Saturdays. Every Saturday there was vanilla ice cream (Grandma’s favorite treat) and root beer (Grandpa’s favorite treat) after supper. Saturday was a good day!

Oh yes – about that cave … when my mother said the root beer was stored in the cave, she was referring to the cellar where they kept potatoes, canned goods, and so on. Not a real “cave” cave.

This is my contribution to Sepia Saturday, where the prompt photo encourages imagination. I encourage you to pay a visit!

When I saw the prompt photo, I thought of a photo that should exist, but doesn’t seem to. I don’t remember having such a photo, but I thought I might find it in a newspaper online. My search was not successful.

When I was a little girl, living in Ottumwa, Iowa, my mother worked in the catalog department at Sears, Roebuck and Co. My mother was an attractive woman – I compared her to the young Queen Elizabeth last week. 🙂 Sometimes her job at Sears also entailed dressing in a costume for some promotion, or sitting on a float – that kind of thing.

The Sears store had a large display window facing the sidewalk of Main Street. When I was maybe four years old, and probably near Easter, Mom and I acted as live mannequins in the window. I’m sure we wore dresses, but I have no memory of style or color. My mom was standing – I visualize her to the front and left of me. I don’t remember if I stood or sat, but sitting makes more sense for a young child that you want to remain still… I guess. Or maybe a sitting child would fidget more?

All I really remember is how fun and funny it was to have people stop and look at us through the window, trying to figure out if we were real people or very realistic mannequins, and watching to see if they could catch us blinking or making a small movement. There should be a photo!

As I searched through the old newspapers, I found my mom in this ad.

Do you think people read that as,”Yes, I know what happened”?

I don’t know what I wore that day, but this outfit is pretty cute and would have been perfect for a display window. 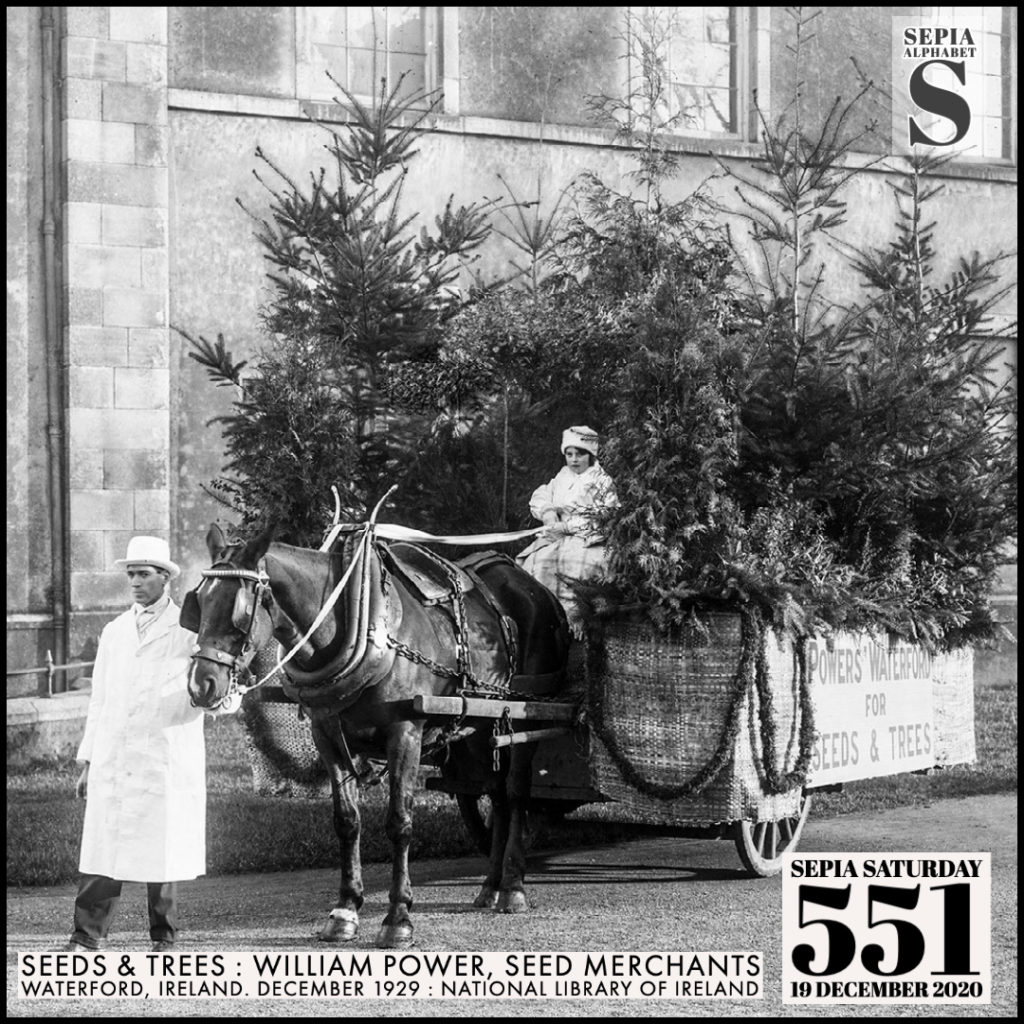 I thought I was going to tell the story of the family tinsel tree, but when I looked for pictures, I found a before-the-tinsel-tree photo and, well … I changed my mind, 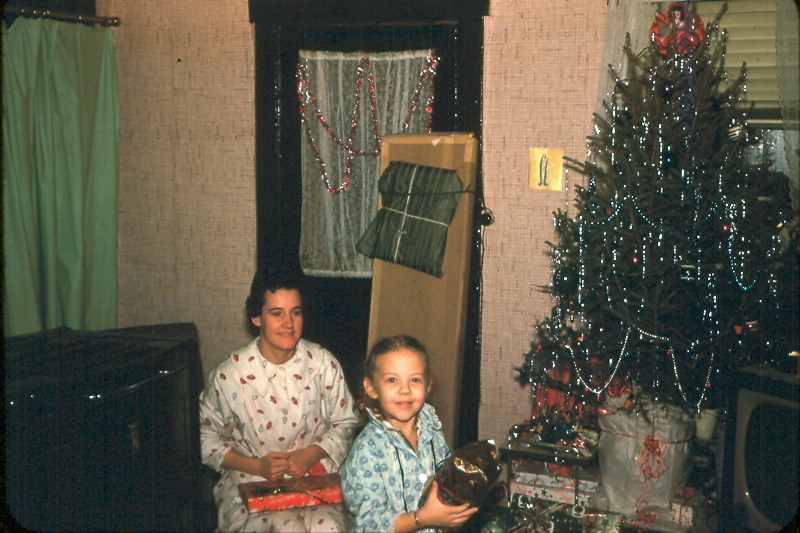 This is a photo of my mom and me on Christmas morning in 1959. We lived with my grandparents in Ottumwa, Iowa. The big dark brown square on the left is the coal burning stove for heat, although its warmth didn’t reach the upstairs. The green curtain provided limited privacy for my grandparents’ bedroom. The wall paper changed every few years as coal stoves tend to make things dingy. The door and wood trim was stained or painted dark and varnished. The big black and white television is on the right – shoved over a bit to make room for the tree. I could be holding a stuffed animal, but I’m not sure. I wonder what was in that tall package leaned up against the door? My first thought is that it is a room divider. The only running water was a cold water tap in the kitchen. Bathing occurred while standing at the kitchen sink surrounded by a folding room divider for privacy. But it could be something entirely different and fun. It looks like the tree has a silver bead garland and some tinsel. The tree topper seems a little unusual – a dark-haired angel surrounded by red?

Another photo taken that morning shows the other side of the room. Hmm – different wallpaper. Christmas cards hung on the wall and tucked in the picture frame. Unwrapped presents cover the couch. And there is my Grandpa Hoskins. This was obviously the year he suffered a serious injury to his hand at the meat packing plant where he worked. Grandpa had to go to Chicago for a few months for rehab and I missed him terribly while he was gone. 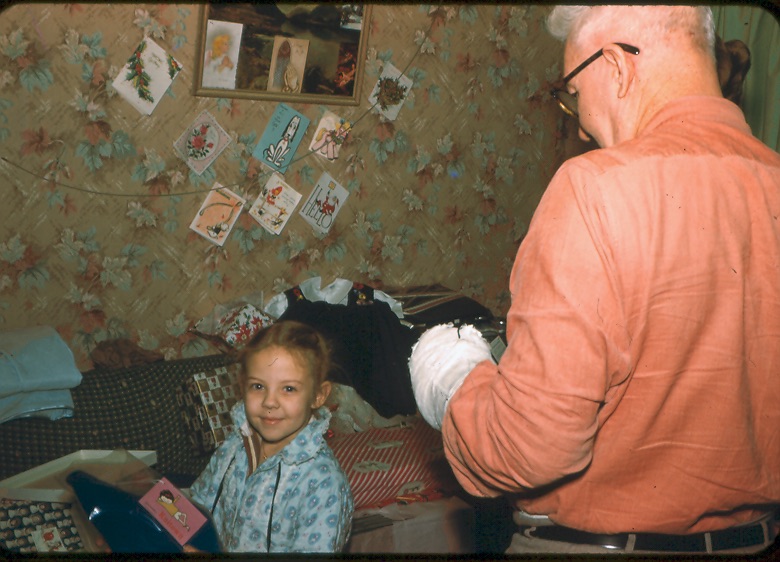 Later that day we changed out of our pajamas and combed our hair and my Uncle Roy, Aunt Joan, and baby cousin Cherie came over. Cherie was born in 1959, so that is how I was able to date this series of photos. 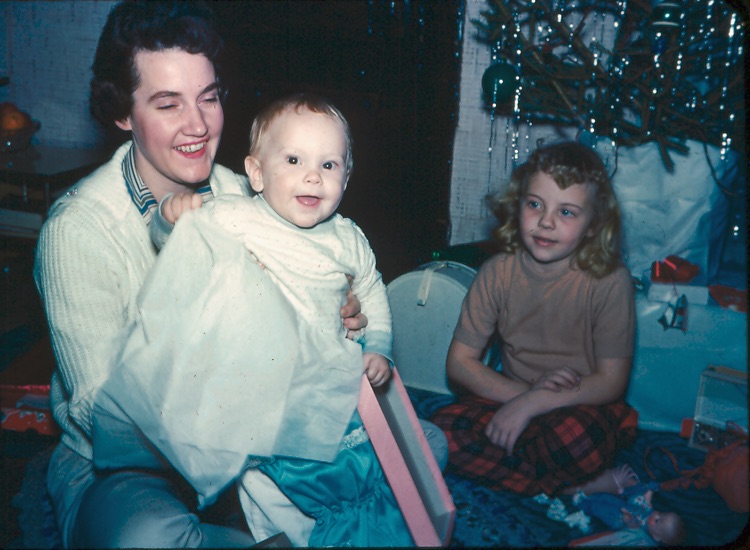 All of the family that lived nearby came for Christmas dinner. I love seeing my grandmother’s smile in this photo. 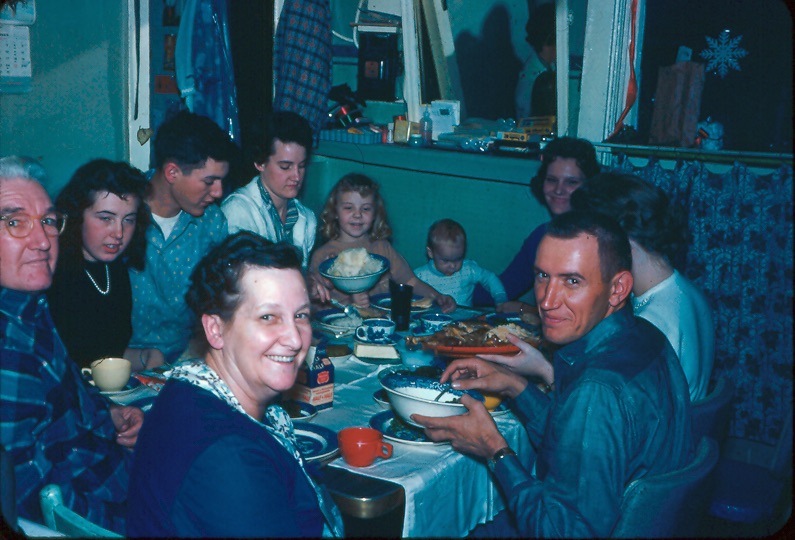 We always ate off of Grandma’s Blue Willow china on holidays. From left to right are my Grandfather, Aunt Vicki, Uncle Mont, Mom, me, Cherie, Aunt Joan, Aunt Wilma, Uncle Don, and Grandma. Uncle Roy must have been the photographer. The black formica table is covered with a tablecloth. It looks like I am taking a big helping of mashed potatoes. I will make a little well in the center for a big pat of butter. There is cream on the table for Grandpa’s coffee and he and Grandma are not using the matching Blue Willow cups, but the ones they used every day – Grandma’s would hold tea rather than coffee. Grandma’s sewing machine usually sat under the shelf below the mirror. I wonder where it is?

This next photo was taken the same Christmas, as evidenced by baby Cherie. We are with our cousin Deb, at her house in Ft. Dodge, Iowa. 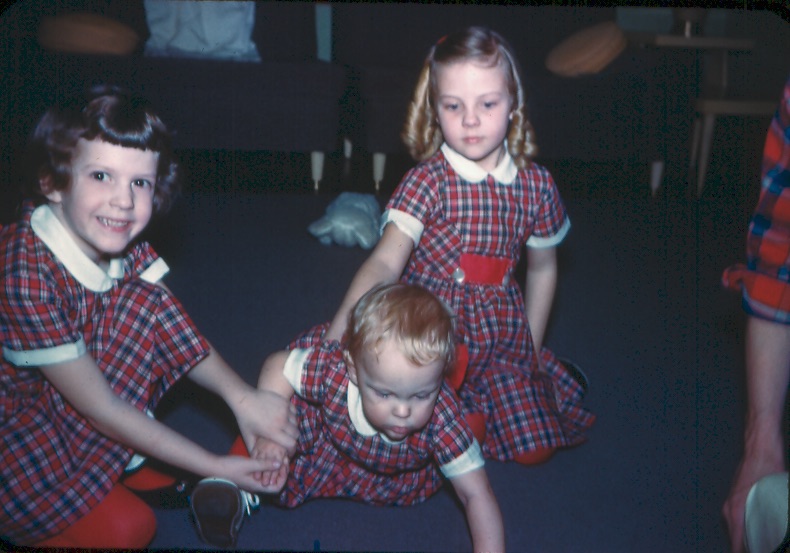 My hair is fixed in the ringlets my mom managed to create once a week for Sundays and  special occasions. Cherie is too busy to pose for a photo. Since my mom worked at Sears, I always assume that items like matching dresses were something she saw at work and suggested or just got for all of us as gifts. If Deb or her mom see this, maybe they can add to my memories.

Christmas in 2020 is not what we hoped it would be. It is likely that many of our family photos will be heads in “zoom boxes” rather than loved ones gathered around a table together. In whatever form it takes, I hope this holiday season brings you moments of joy and peace and the sharing of love.

Please visit my Sepia Saturday neighbors here to see what they have shared for us.

Edit: July 7, 2021 – I figured out that the first two photos were from 1958 – the year before my cousin was born, based on some additional photos. Doesn’t change much, but best to be accurate!