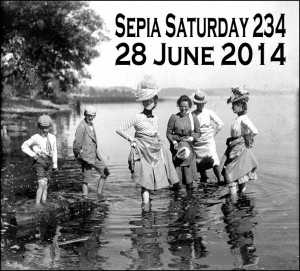 It has been a long time since I’ve done a Sepia Saturday post, but when I saw the prompt, I knew I had the perfect picture, so what could I do?

Here is a photograph of my grandmother, Eveline Hoskins nee Coates, standing in Walnut Creek near Mystic, Iowa with her dress hiked up just a wee bit in back. 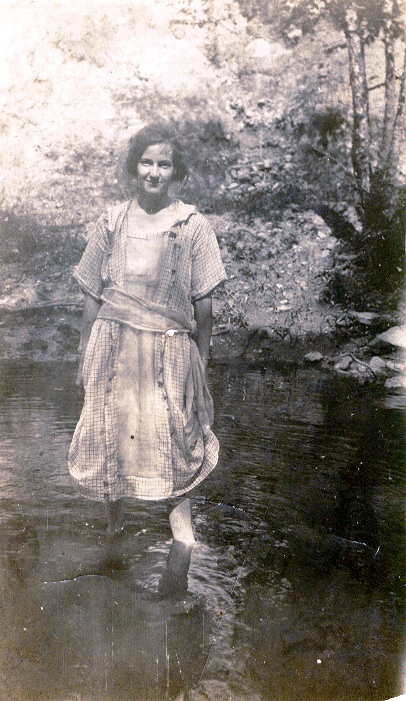 She looks happy, with a slight smile for whomever is taking the photograph.

I wanted to take a closer look at her dress, but I must have scanned this from someone else as I don’t seem to have the original so I can’t scan again for better resolution. It’s been over a year since I accessed all of my old photos and moved them to another room, so maybe I’m just not looking in the right place. Doesn’t say much for my organizational skills – or my memory, does it?

Here’s another picture taken that day at the creek. 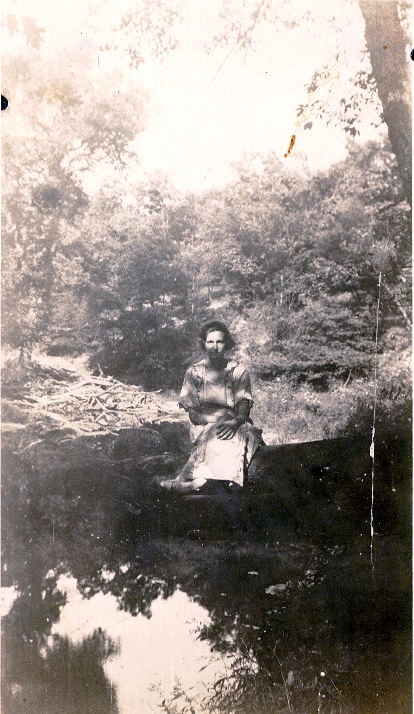 No smile for this picture and Eveline is partly obscured by the shadows. It looks like there is a lot of debris behind her on the left. Wood scraps? Branches? I keep trying to imagine this photograph in color. I’m sure it was a beautiful setting with the shadows and reflections.

I’m working at blogging regularly and I’m almost there, but what I haven’t been able to get back to yet is the reciprocity. As I incorporate each additional thing to my routine, it takes a bit of effort. Reading and commenting on blogs hasn’t hit the the top of the list yet. That said, I’ll make every effort to get around to as many Sepians as I can since I am participating this week.

Please join me as I happily wade through the posts submitted by other Sepia Saturday participants.

Say that 10 times as fast as you can!

As I mentioned last Friday, my husband was sick last week so I became the caregiver – a role I haven’t played in a year. It felt good to be able to take him to doctor appointments, pick up his prescriptions, go to the grocery store, and do a little cooking. I wasn’t too pleased that some of these things required possible exposure to lots of germs. Grocery carts… Doctor offices… But I’ve developed a new habit – using hand sanitizer as soon as I return to the car. Or, in the case of the doctor’s office, I used it as soon as I sat down in the waiting room!

I’ve become quite the germaphobe. 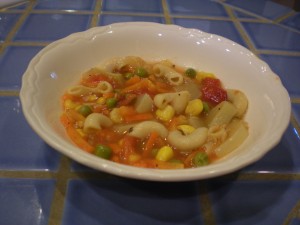 Hubby wanted soup and our cupboards were nearly bare (before I made that trip to the store), but an old microwave recipe of Mom’s came to the rescue. You can substitute freely with what is on hand. Sometimes I add a can of chick peas or white beans. It’s quick and easy. I didn’t think to take a picture until there was only this little bit left.

I like to include the written recipes to preserve example’s of the writer’s handwriting. Mom wrote this out for me. I added a couple of notes in parentheses. You can see by the smudges and spills that it’s been used a few times! 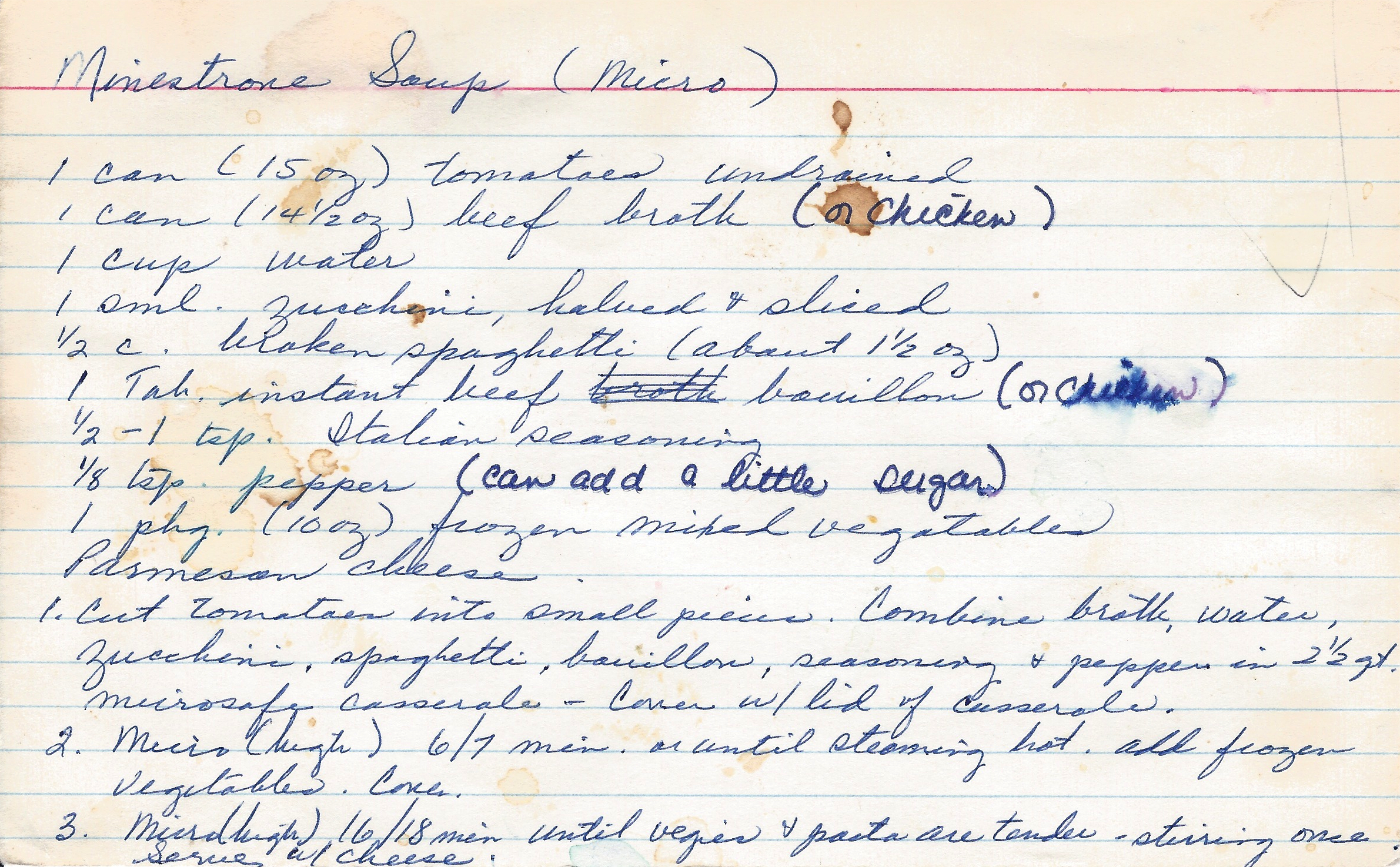 I never remember the cheese.

It is surprising how frequently the news today echoes the news of the 1960s. As one example, courts in 2014 are hearing cases concerning prayer in public meetings and whether a Bible curriculum written by the conservative Christian and owner of Hobby Lobby can be taught in public schools. On June 25, 1962, the Supreme Court delivered a decision on Engel v Vitale, a case involving a state-written prayer for use in the public schools in New York.

Almighty God, we acknowledge our dependence upon Thee, and we beg Thy blessings upon us, our parents, our teachers and our Country.

“As supervisors of the state’s public education under New York law, the Board of Regents wrote this classroom prayer in 1951. Formal religion has no place in public schools, they said, but ‘teaching our children, as set forth in the Declaration of Independence, that Almighty God is their Creator’ would give the ‘best security’ in dangerous days. They recommended their prayer to local school boards; some accepted it, including the board in New Hyde Park, which voted in 1958 for the prayer to open each school day.” (1)

The parents of ten students in the Hyde Park school system objected and asked a New York court to stop the use of the prayer. The state court upheld the use of what became known as the Regents’ Prayer in the schools. In 1961, the Supreme Court accepted Engel v Vitale for review. And on June 25, 1962, the Supreme Court reversed the state court’s decision, saying that it violated the First Amendment’s ban against the establishment of religion. The court ruled that “any state-sponsored prayer, even if it is denominationally-neutral, represented an unconstitutional effort to promote religion and an infringement of the wall of separation that the Constitution set up between church and state.” (2)

As one can imagine, the decision sparked a great controversy, with a number of prominent church leaders and politicians speaking out against the decision.

President Kennedy was asked about the decision during a press conference on June 27, 1962:

And later that day, Fred M. Webber, General Presbyter of the Presbytery of Baltimore, spoke briefly at a celebration of the the 110th anniversary of the founding of Westminster Presbyterian Church in Baltimore. Fred M. Webber addressed some of his comments to the Supreme Court decision and recommended that people “read and heed” what President Kennedy had to say. He is quoted as saying:

“I find it a little difficult to think that the striking down of that prayer is a great tragedy.”(3) 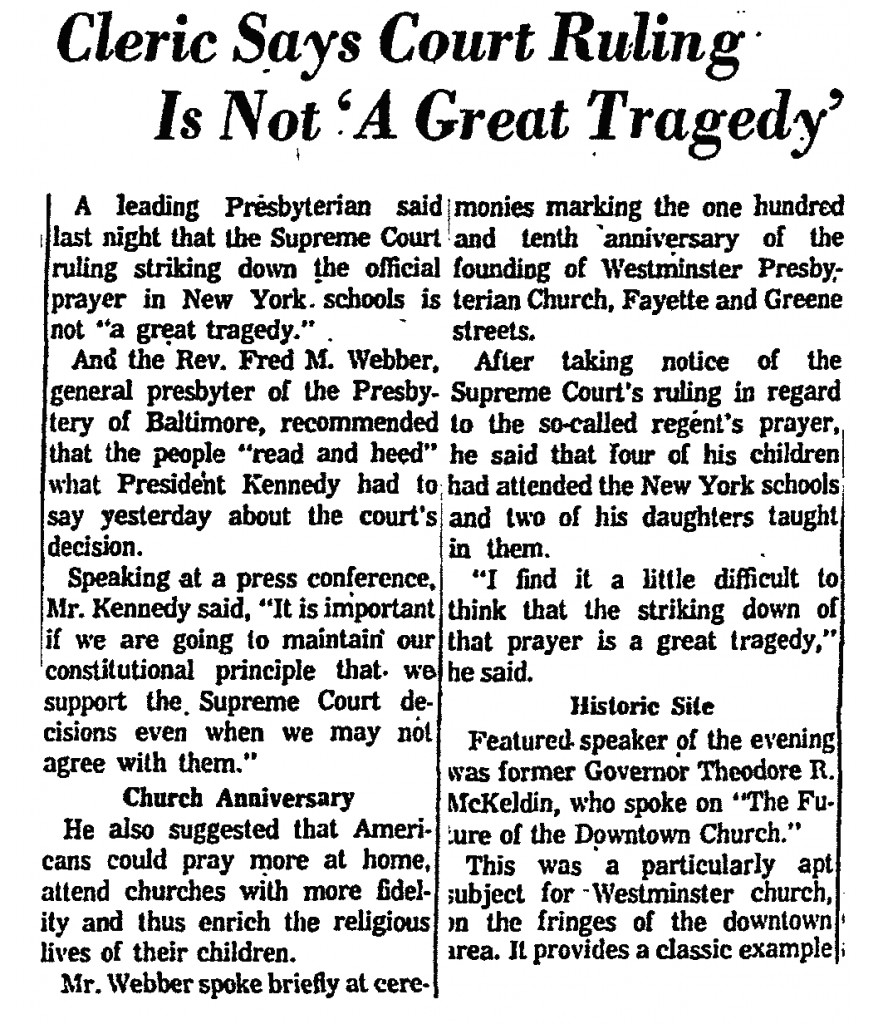 I’m with you, Uncle Fred.