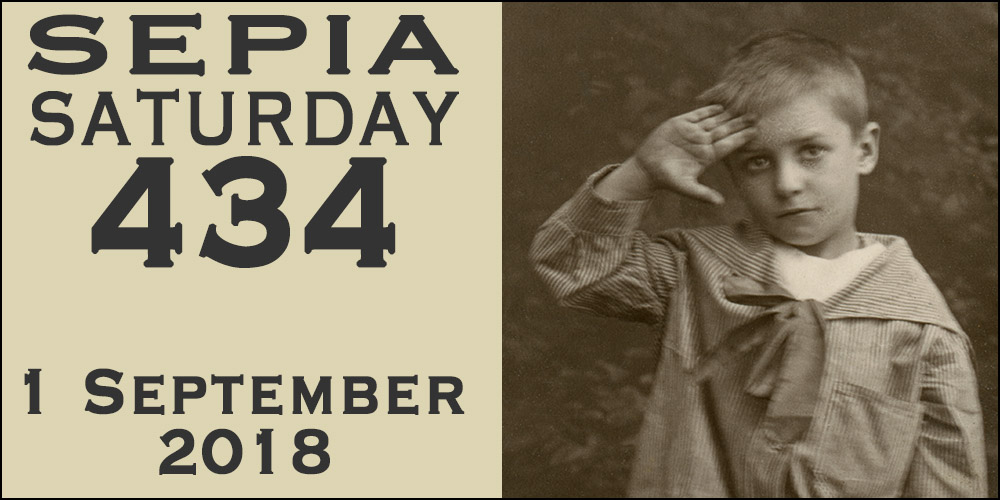 This saluting boy had me thinking “military” as a response and I was reminded of a photograph of my great uncle in uniform. Although obviously much older than the boy in the prompt photo, Uncle Norman has such a boyish appearance in the photograph. 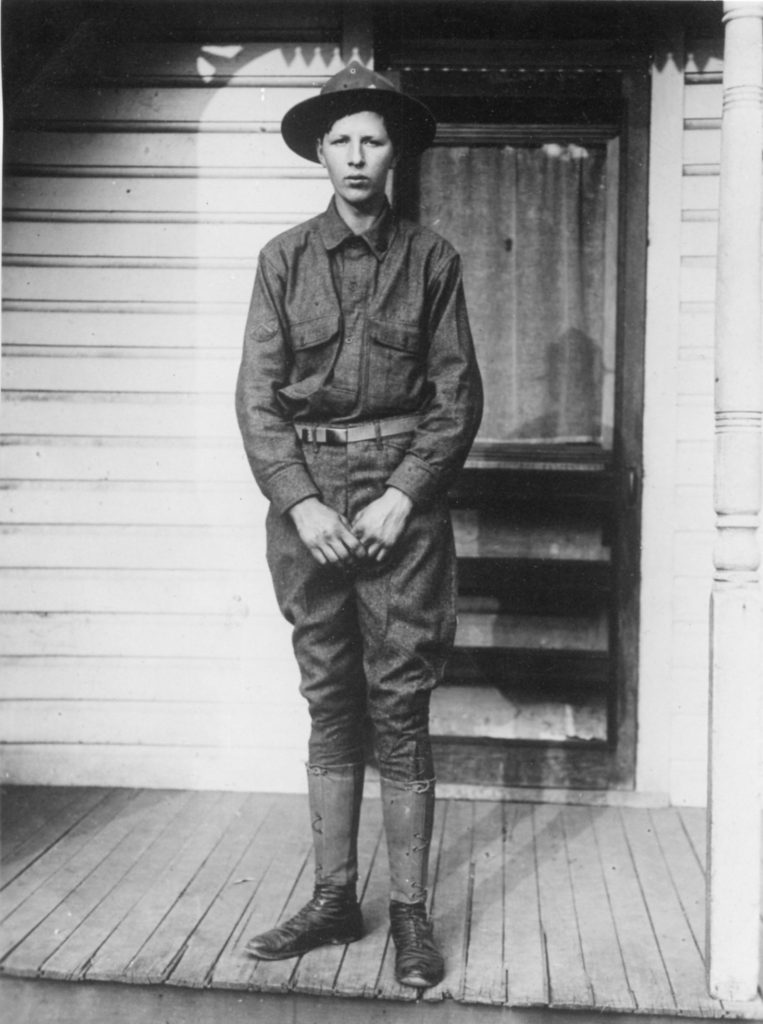 John Norman Webber, who went by his middle name, was the eldest of nine children born to M. D. and Dorinda Strange Webber. He registered with the Jefferson County draft board in Fairfield, Iowa on September 12, 1918. Norman was 19, just a couple of weeks shy of his 20th birthday. 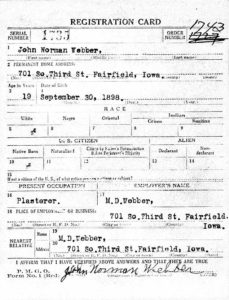 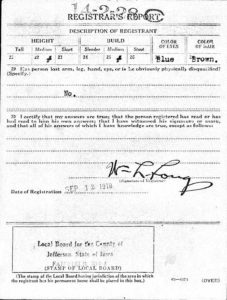 A report of the Adjutant General of Iowa provides scant information about Norman’s service in the Iowa National Guard.
1. He enlisted a few weeks after registering for the draft – on October 7, 1918.

I guess Headquarters Company was organized before it was “federally recognized.”

4. And one little bit of information regarding an inspection of Headquarters Co. in 1920. 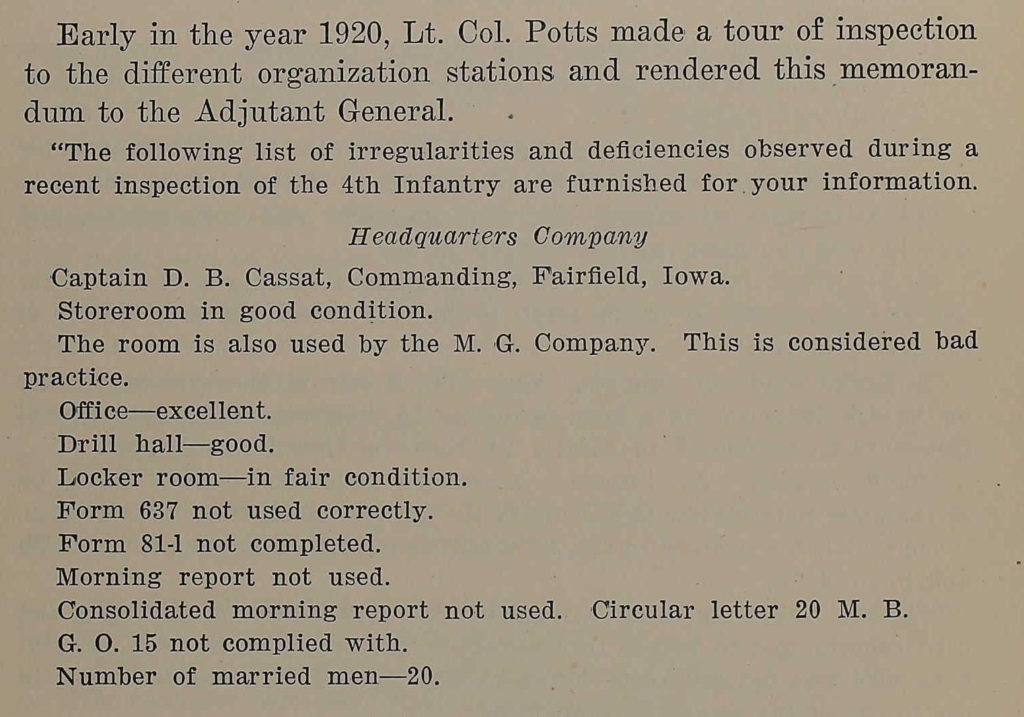 Norman was not among the 20 married men. That first notation regarding Norman’s service states that he was promoted on May 25, 1920. That’s all I know about Uncle Norman in the National Guard during WWI.

Although Norman did not see combat and did not even leave his hometown (from what I can determine), his younger sister Hattie, who would have been about fourteen when Norman began his service, wrote a poem that expressed her thoughts about seeing Norman in uniform.

Hattie sent a copy of her poem to her grandmother with the following note on the back:

“Grandma, I wrote this when Norman enlisted and do not know whether I sent it to you or not.   Papa say it is’ent much but I like it anyway it is what I thought at the time.

I am getting along nicely in school I think.  Abbie is better now and expects to go to work tomorrow.

Although I didn’t get to spend a lot of time with Great Uncle Norman, he always impressed me as a gentle man, concerned with the “simple” things in life. He did not seem driven by want of material possessions nor by ambition. He and his wife might be called “minimalists” in today’s jargon, although not really, because that term implies having some wealth but choosing to downsize – or furnishing one’s home with a sleek and spare design aesthetic. Of course, these assumptions are based on the memories of a child who did not know the innermost motivations of her great uncle.

In learning this little bit about Uncle Norman’s service in the Iowa National Guard, I was thankful that domestic service during a time of war was an option for him, for I wonder how he would have fared if he had seen combat.

Uncle Norman sometimes wrote down his thoughts or a little detail about his life. I’ll close with something he wrote dated October 22, 1947. 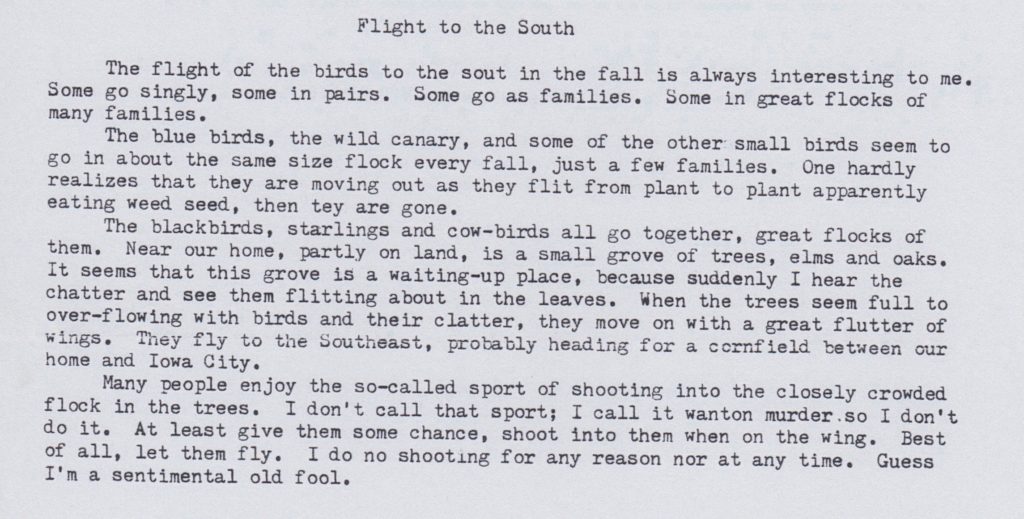 This is where I usually ask you to visit the other participants in Sepia Saturday and follow the links to what they have prepared in response to the prompt photo. Unfortunately, the links are not there today, but you can access several from the sidebar on the blog or in the comments. Hopefully all will be back to normal by next week.

In an attempt to get back to blogging, I started looking for memories that my uncle had written. I didn’t find them. 🙁 But, that led me to look through a few of his mother’s (Eveline) things and one of the items I re-found was this poem. The poem is written and illustrated in brown ink with water color details. It is on thin, but sturdy, art board. 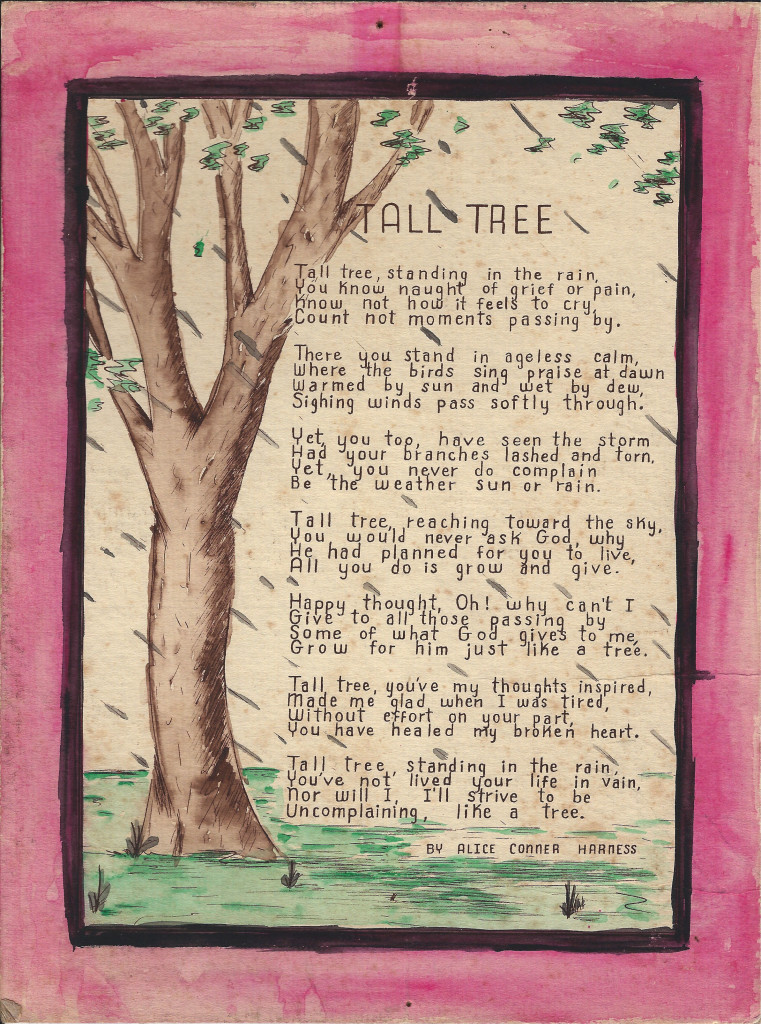 This may have been on Eveline’s bulletin board at one time because of the holes made by tacks. Or maybe it just hung on a wall.

Several years ago I did a google search to see what I could find out about the poet, Alice Conner Harness, but I came away with pretty much nothing. Since my grandmother Eveline was a school teacher, I wondered if a student had made this for her, or if the poet was someone who lived nearby. Was it a favorite poem of my grandmother and someone illustrated it for her as a gift?

Yesterday’s google search took me to a query I had posted about the poem in 2003 on the Appanoose County Iowa Genweb board. It seems that a few other people have something similar in their possession.

A response in 2010: I also have a copy of this old poem on hard backed paper. ALso looks handwritten and sketched with a tree to the left of the poem. If anyone has any information about this poem or the author I would love to know the background. This was in my grandfather’s trunk.

A response from January 2015: Some 30 years ago my wife’s grandmother died. As we cleaned out her home I found the poem “Tall Tree” on card stock in brown ink and with the drawing of the tree on the right side. My call sign was “Tall Tree” due to me height and so I captured the poem and have had it ever since. It is slightly damaged with a water stain in the lower right corner. I would love to know more history and/or information about the author or the poem. Thank you.

About a week later, someone added an obituary, a little additional information, and the poem typed. The post provides the following information: Alice was born in 1902 in Jefferson County, Iowa, taught for one year, raised a family, moved to California in 1953 and died in 1997. She and her husband, Ezra, lost a son in the Battle of the Bulge. Alice worked as a counselor in the California prison system and started a halfway house for those released on parole.

A little more searching and I found that Alice Conner Harness wrote a 32-page book of poetry titled Along the Way. It was published by the Tribune Printing Co. of Fairfield, Iowa in 1948. It looks as though a copy of the book is available in the Grinnell College Burling Library in Grinnell, Iowa, including the author’s inscription and autograph. Copies may also be available for library use at University of Iowa Libraries in Iowa City and at Florida State University in Tallahassee.

And one more thing about Alice – she was a member of the Gold Star Mothers. 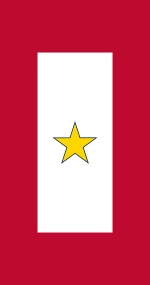 According to Wikipedia: “The American Gold Star Mothers Inc. was formed in the United States shortly after World War I to provide support for mothers who lost sons or daughters in the war. The name came from the custom of families of servicemen hanging a banner called a Service Flag in the window of their homes. The Service Flag had a star for each family member in the United States Armed Forces. Living servicemen were represented by a blue star, and those who had lost their lives were represented by a gold star. Gold Star Mothers are often socially active but are non-political. Today, membership in the Gold Star Mothers is open to any American woman who has lost a son or daughter in service to the United States. On the last Sunday in September, Gold Star Mother’s Day is observed in the U.S. in their honor.”

I found one other poem by Alice Conner Harness in a google preview of a book titled That Knock at the Door: The History of Gold Star Mothers in America by Holly S. Fenelon. Appendix C contains poetry and clippings.

God, help me be worthy of the son I bore
Who, by his sacrifice in the white-hot hell of war,
Paid the price of freedom;
Help me pray for peace;
That men may find wisdom and that wars shall cease.

God, help me be humble when homage is shown
To me, his mother;
This honor is not mine alone.
In his name I am proud to accept it posthumously;
That honor alone is enough for me.

God, keep me ever true with courage so strong
That though the bitter struggle for peace be long,
My faith in the principles he died to uphold
May make me worthy to wear the star of gold.

Now I know a little more about Alice Conner Harness, but I still have questions:
*Did Alice write and illustrate the poem onto art board? If not, who did?
*Why do several random people with connections to Appanoose Co., Iowa have a similar or exact item in their possession?
*Tall Tree is about grief and pain, perhaps especially meaningful to those who had lost a loved one. Were these sold to raise funds for some endeavor? Were they given to someone who had experienced a loss? My grandmother did not lose a child in a war, but lost a 5-year-old son to complications of measles.

I hope someone can help us solve the mystery of the Tall Tree!

***
Fenelon, Holly S. That Knock at the Door: The History of Gold Star Mothers in America. Bloomington, IN: iUniverse, 2012 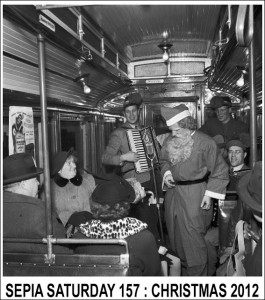 I’m glad that Sepia Saturday is “come-as-you-can” during the holidays as there are a couple of Christmas Day wedding anniversaries I had hoped to recognize but missed the day.

First is the 115th anniversary of the marriage of my paternal great-grandparents on Christmas Day 1897. 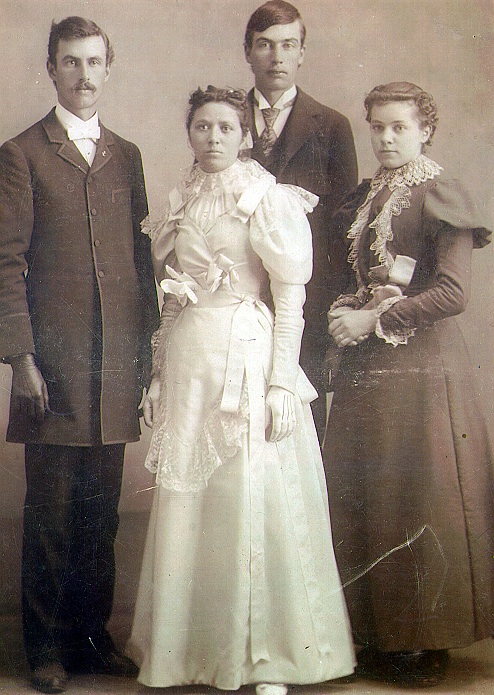 Myron David Webber and Dorinda Rebecca Strange were married in the home of her parents, John Sylvester Strange and Susan Nancy Hendrickson, in Lincoln, Kansas. Unfortunately I don’t know who stood with them in the photo. 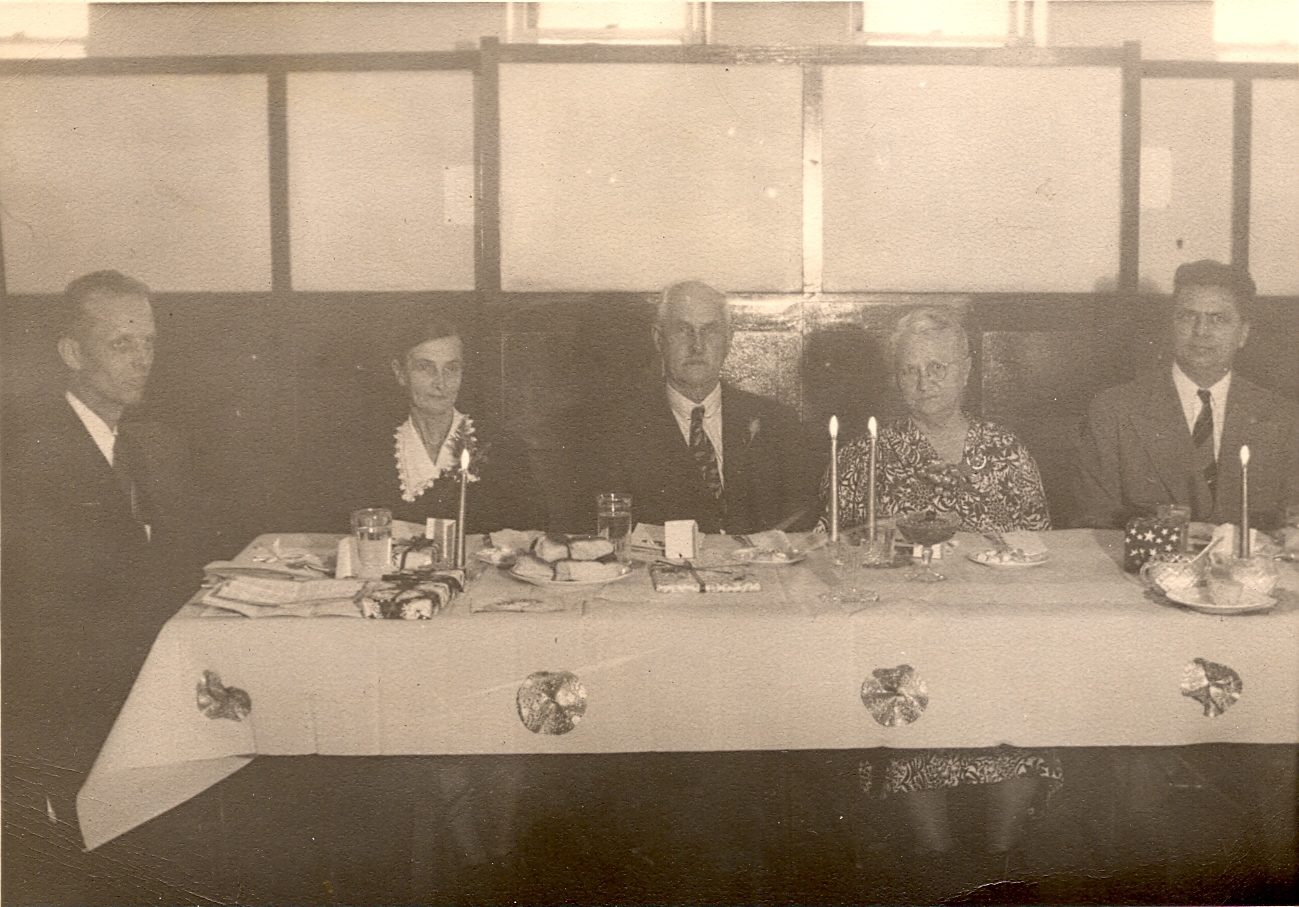 In my grandmother’s photo album I found a picture of some flowers sent for the celebration and of a “wedding cake” – which I assume was also a part of the anniversary festivities. 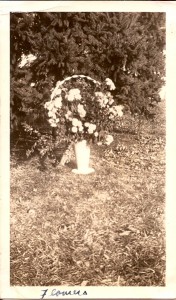 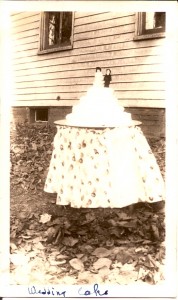 Fifty-five years after the marriage of her parents, Woodye (Woodrow Wilson Webber) married the love of her life, Orville Kessler, on Christmas Day 1952. 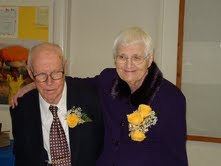 Woodye had two children from a previous marriage and she and Orville had three more, but all were Orville’s children. The adoptions took place when the older girls were no longer girls, but quite grown up – a joyous occasion! I don’t have a picture of their wedding, but their daughter Wilda supplied me with these pictures from Woodye and Orville’s 55th wedding anniversary.

Wilda said in her email: “The bells in the 2nd photo are from our grandparents 50th anniversary and if my memory is correct were hung for Mother and Dad’s wedding, Dorinda’s and mine.”

And to bring this full circle, I’ll end with a poem written by Woodye’s and Orville’s daughter, Wilda. The poem evokes a memory of her grandfather, Myron David Webber, on a Christmas morning.

If you would like to see more holiday stories from sepia images, visit Sepia Saturday.