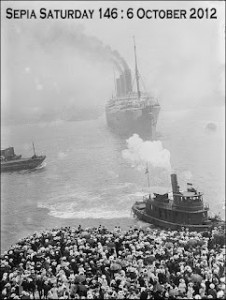 My first thought upon seeing today’s prompt was of a Christmas card sent from the H.M.S. Birmingham to my grandmother, Eveline Coates.

I thought I had a scan of the card or maybe the card itself, but unfortunately, all I have is a Xerox copy. Drat.

I’m going with it anyway. 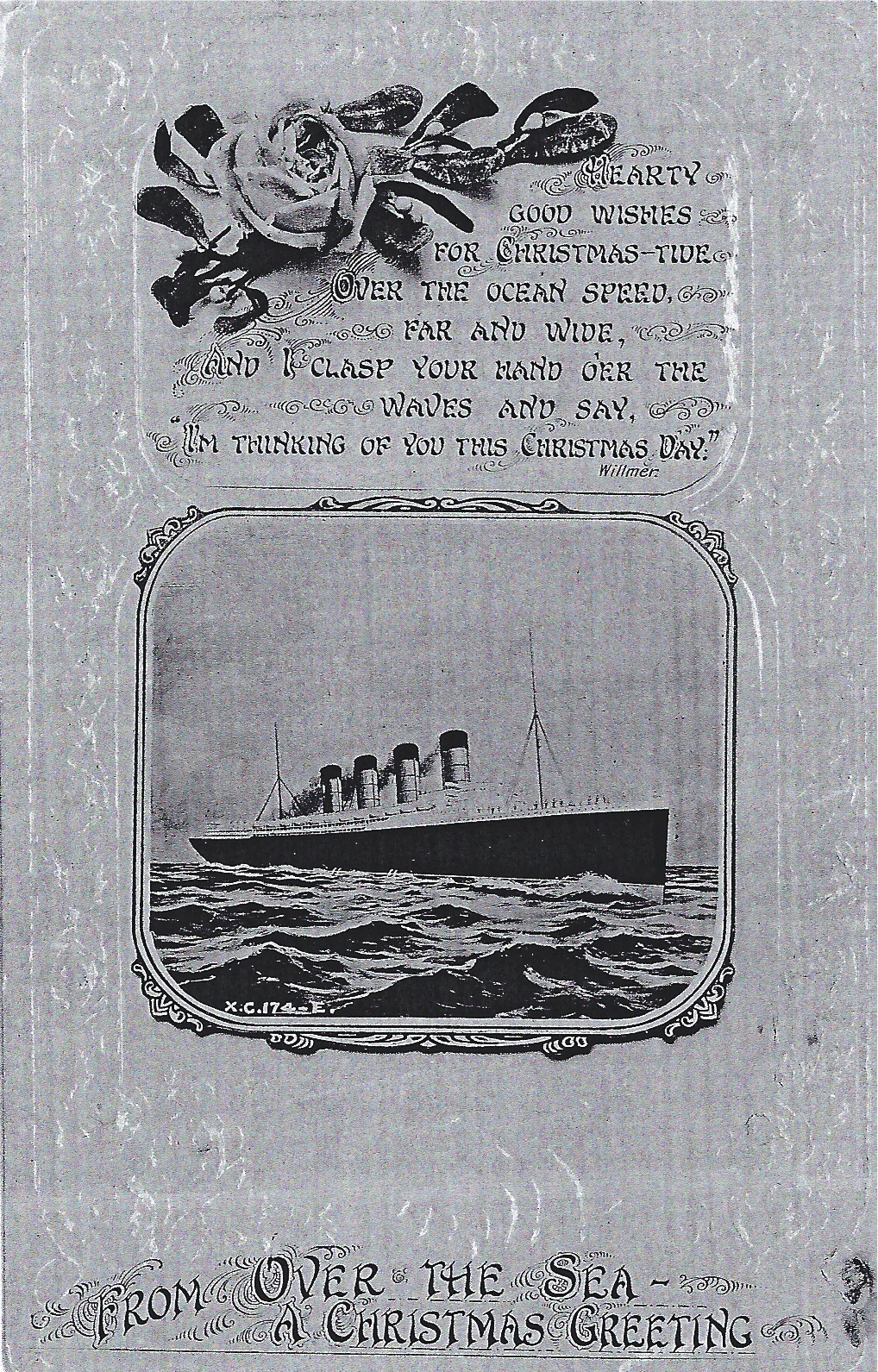 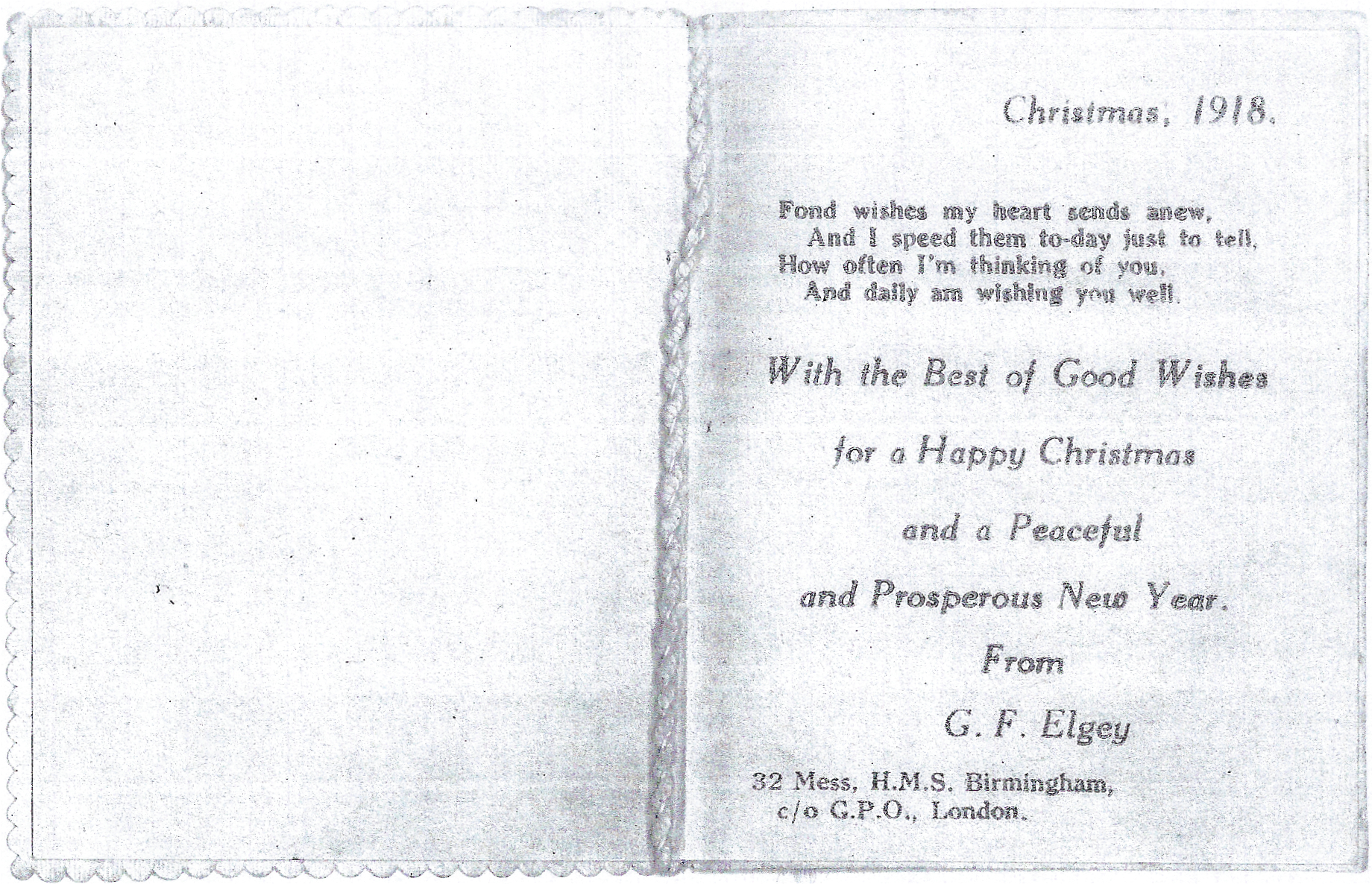 The Christmas card, featuring a Navy vessel, was sent by this handsome young man. 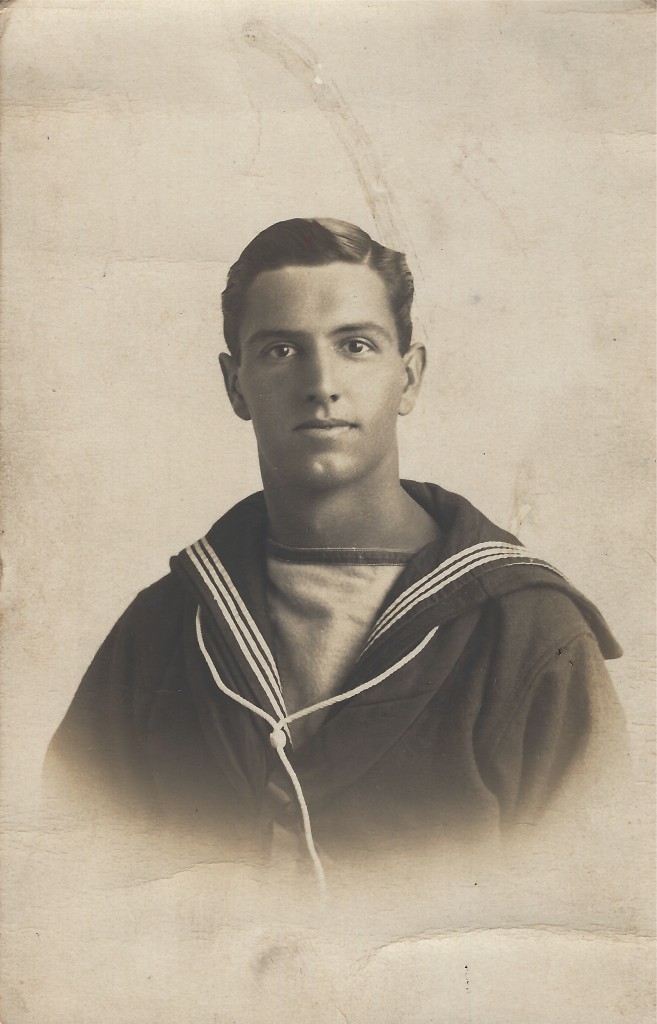 George Elgey was my grandmother’s cousin. 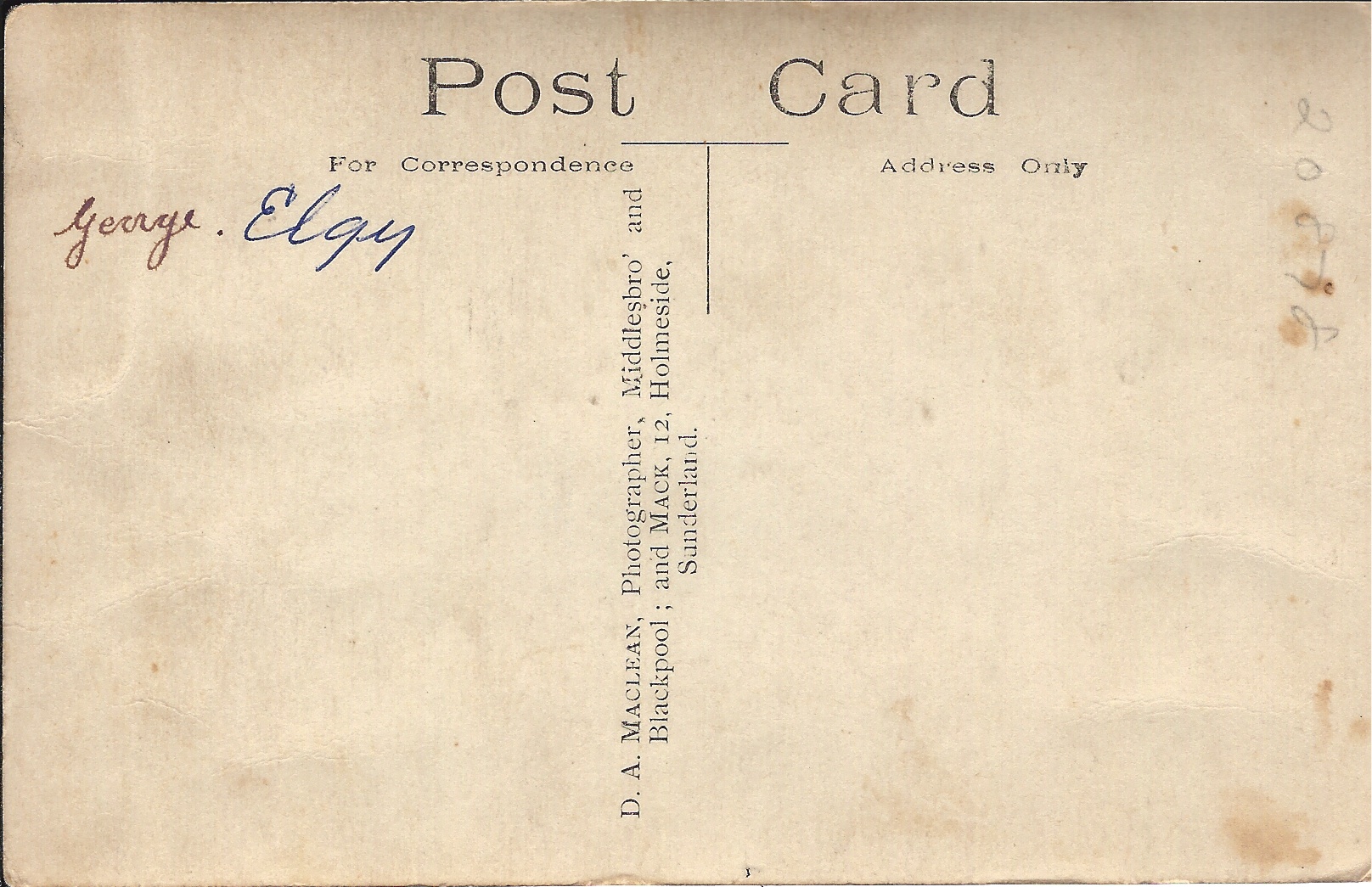 George signed his name on the back of this photo. Eveline added his surname. 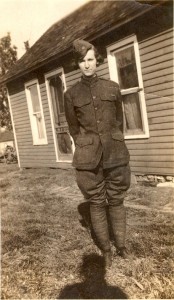 George was born in Easington Lane, Durham, England on June 10, 1899. Eveline was born in Mystic, Appanoose, Iowa, USA, on February 15, 1901. Although first cousins and close in age, they never met.

George’s mother, Jane Ann (Jennie) Coates, and Eveline’s father, Joseph Coates, were siblings. Joseph boarded a ship as a young man sometime around 1889 and made the journey across the Atlantic. As far as I know, Joseph never saw his parents or siblings again.

George joined the Royal Navy sometime before August, 1918. Eveline graduated from Mystic High School in 1918 and entered normal school in the fall in Cedar Falls, Iowa. Both away from home for the first time, but under very different circumstances.

Eveline corresponded with her Aunt Jennie and several of Jennie’s children for many years. I am fortunate to have copies of a few letters sent to Eveline. It is one of my fondest wishes to find an “English cousin” in possession of the letters Eveline wrote.

I have a copy of one other bit of correspondence from George to Eveline, sent from the HMS Birmingham in August of 1918. 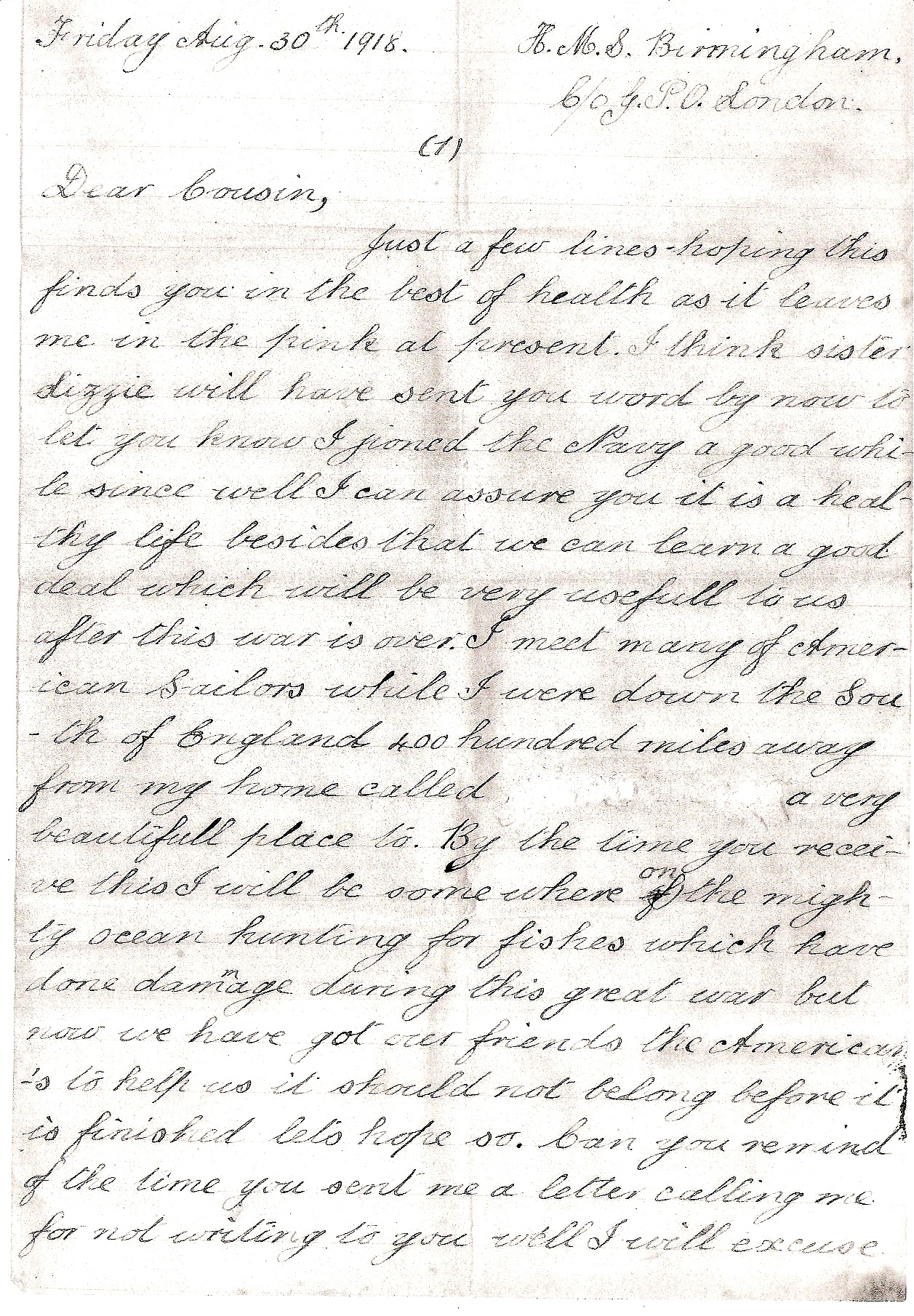 Just a few lines – hoping this finds you in the best of health as it leaves me in the pink at present. I think sister Lizzie will have sent you word by now to let you know I joined the Navy a good while since well I can assure you it is a healthy life besides that we can learn a good deal which will be very usefull to us after this war is over. I meet many of American Sailors while I were down the south of England 400 miles away from my home called (erasure) a very beautifull place to. By the time you receive this I will be some where on the mighty ocean hunting for fishes which have done damage during this great war but now we have got our friends the Americans to help us it should not be long before it is finished let’s hope so. Can you remind of the time you sent me a letter calling me for not writing to you well I will excuse you for that as I know you did not mean it. I would have wrote to you sooner only I did not know your address untill I went home on leave. I suppose you will often hear from sister Lizzie as I think she does a great deal of writing but not so many as her brother George not by a good deal. Before I joined up I never wrote above two letters in all my life and now I do nothing else in my spare time. Please give my best love to all at your home also to Cousin Mr. and Mrs. Carl Coates. I have sent home to tell them to send you one of my photoes taken while in civil life and will do my best to send you one I have had taken in my sailors clothes. This is my address,

Eveline had a strict policy regarding correspondence. She promptly answered letters she received. In turn, she expected a reply within a reasonable amount of time. If one of Eveline’s letters went unanswered, she would write to you again, but with an admonishment and possibly a note that this would be the last letter you received until she heard from you. I know this from personal experience. The letter above confirms that grandmother instituted this policy early in life – evidenced by the scolding previously delivered to George. Now aboard ship, George had plenty of time for writing letters.

The cousin, Carl Coates, referred to in the letter is one of Eveline’s older brothers. 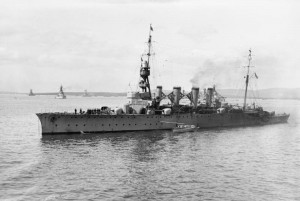 George’s signature indicates his rank as Stoker II. The little research I have done informs me that stokers were in charge of generating steam for the turbines that powered the ship. The HMS Birmingham carried both coal and oil as fuel. Young George may have spent many hot and dirty hours shoveling coal into the boilers. Or he may have done maintenance on the engines. In any case, he made no complaints about his duties, assuring Eveline of his healthy life aboard ship.

Although the H.M.S. Birmingham was involved in several battles during World War I, most famously for being the first cruiser to sink a submarine, the time George spent on the Birmingham seems to have been relatively uneventful.

I wonder if George prepared his Christmas cards before the war ended on November 11?

Lastly,the prompt above suggests not only ships, but crowds and travel. As I am posting this on Friday Oct. 5th, I’ll finish with something completely unrelated to George, the Navy, or ships and pay tribute to the British invasion that began 50 years ago with the release of this song:

37 thoughts on “Sepia Saturday – Letters from the H.M.S. Birmingham”