May 5-11, 2019 was National Teacher Appreciation Week in the U.S. One of my friends posed this question on Facebook: Can you name your teachers K-5th or 6th grade? No. I can’t. I had three teachers at three different schools in 6th grade and I have no idea who they were. I think I slept my way through Kindergarten. I remember my teacher’s name, but not much more. I have some memories of 2nd grade, but not sure of the spelling of the teacher’s name. 4th grade is a bit of a blur. My 3rd and 5th grade teachers were memorable, but my 1st grade teacher is the one I remember most fondly. 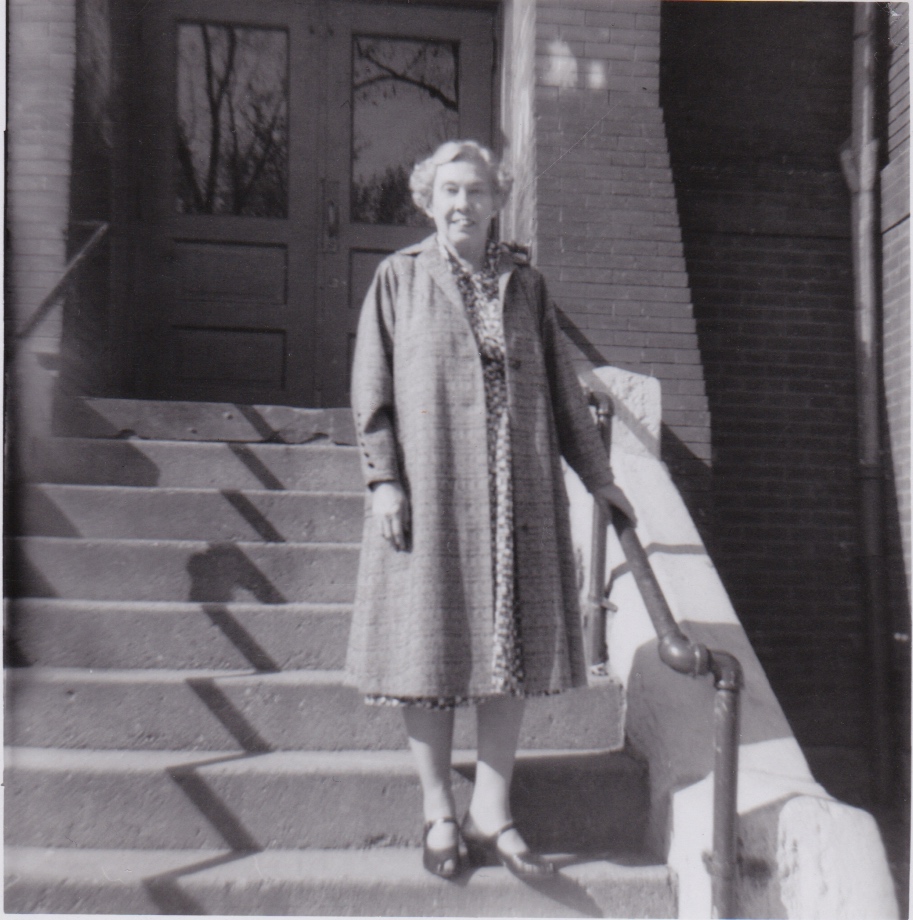 I was the youngest student in Miss Willard’s class; I didn’t have my 6th birthday until mid October, just two days before the cut-off date.

There were more than thirty students in our class and over the course of the year, six of us were named Kathy or Cathy. Miss Willard had to resort to numbering us to clarify who she was calling on. I don’t remember my number – they were only needed if two of us had the same last initial, which apparently happened for part of the year.

The school was already decades old when I attended. Our classroom was rectangular, Miss Willard’s large wooden desk at the front. Was it elevated on a platform a step higher, or does a childhood memory place my teacher on a higher plane?  Wood and iron desks on a wood floor. Windows along the side to the students’ right and windows at the back of the room were opened on warm days. Miss Willard had a few plants on window sills. Built-in cabinets on the lower half of the other side wall. Miss Willard occasionally brought in something she had gathered from nature to place in the room. The one I remember is the bouquet that included pussy willow that grew in the wild. It was the first time I had seen it or heard it’s name and I was intrigued by the look and feel of it.

My little brain hadn’t quite developed by the beginning of 1st grade to be able to do all that was expected – and this was 1959. I can’t imagine how “behind” I would have been with today’s expectations and testing of young students! We were grouped for some subjects and I was in the bottom group for everything that had a group. I wasn’t told I was in the bottom group; the groups were named by color or animal or something, but I caught on. My report cards were filled with U’s for Unsatisfactory.

I guess I couldn’t even sing on key when I started 1st grade. I remember Miss Willard pulling me aside one day and asking if we had a piano at home. We did, although no one played it. She told me to ask my mother to play the C scale for me and I was to sing along and match the tones. She gave me singing homework! But I was happy about it. I didn’t mind at all.

And there was that cabinet on the side wall …

If a school-wide assembly was about to occur, Miss Willard would tell us what to expect and what she expected of us. If we behaved ourselves, when we returned to our classroom, Miss Willard would compliment us, telling us we behaved better than the older students. Then she might go to that cabinet and pull out a big box of animal crackers and start passing them out. She didn’t bribe us ahead of time – it was a surprise to me, or a hope, once I caught on that she had treats in that cabinet.

And at the end of each grading period, she would hand out little rewards for improvement. Nothing big – just a couple of animal crackers or vanilla wafers or maybe a piece of candy. But your effort was recognized. And rewarded.

As the year progressed, I moved up from the bottom groups and in the spring, those U’s on my report card began to turn into S’s, for Satisfactory.

On the last day of school, Miss Willard recognized the improvements everyone made throughout the school year. I had made the most improvements of anyone. Accordingly, I received the most rewards! Again – just little things, but this time we may have gotten to choose which treat we wanted. I may have even received a certificate to document my accomplishments. If I did, it is long gone.

My first grade year was Miss Willard’s last year to teach. She retired. I felt sad that she would not be there when I returned in the fall. I helped Miss Willard pack up her belongings that decorated our classroom. I remember it as “me” helping her, but I’m pretty sure there were a couple of other students besides me. We must have stayed in during recess to spend this time with her. Miss Willard told us we could choose something to keep. I chose a pretty, but chipped, china saucer that she had placed under a plant to catch water. I kept it for a long time. 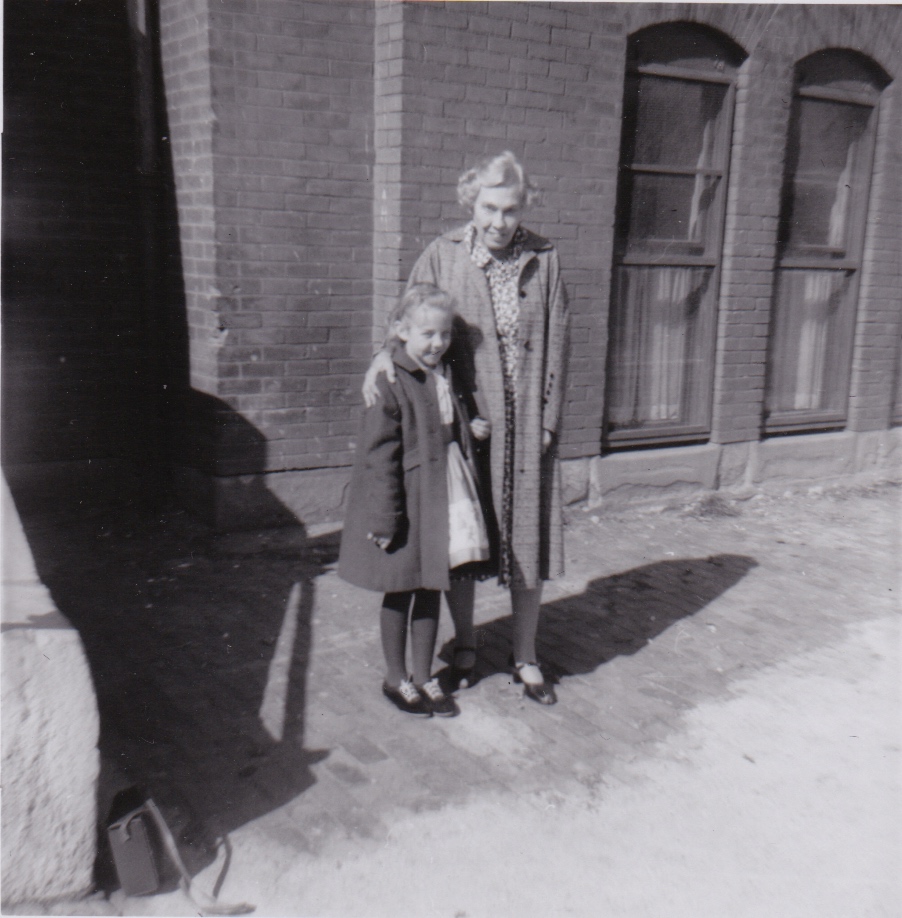 Me and Miss Willard

When I decided to write this, I only knew my teacher as Miss Willard, but a look around genealogy websites gave me her full name, Georgia Vivian Willard. I knew that Miss Willard had never married, but that was the only fact I knew about her. A look through some old newspapers shed some additional light on my beloved teacher.

One of the first things I found was her obituary, which provides her birth and death dates, as well as family members and how many years she dedicated to teaching – almost 50!

My mother and I also attended First Methodist Church. Why did I not know this? I don’t have any memory of seeing Miss Willard there, yet I know from some older newspaper articles that she had been an active member – at least during her younger years. I would imagine that she remained active. Well, sometimes kids miss a lot of what is going on around them. I know I did. Also, we moved away in the summer after 2nd grade, so my time and memory there was limited.

I even found the advertisement of the auction for her estate. 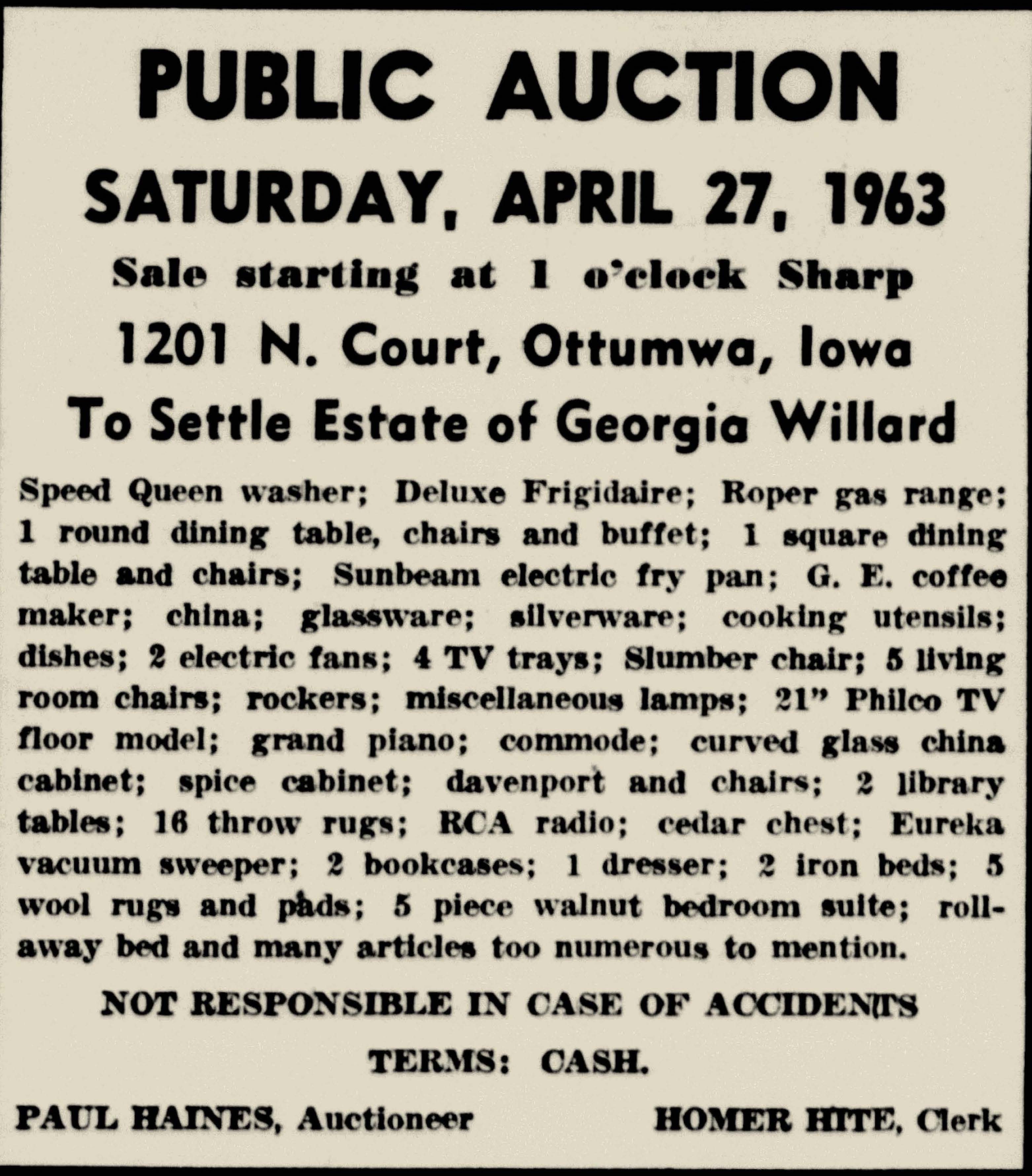 Interestingly, I even found out what kind of car she purchased in 1937 – a Nash Lafayette sedan. I guess it was news? 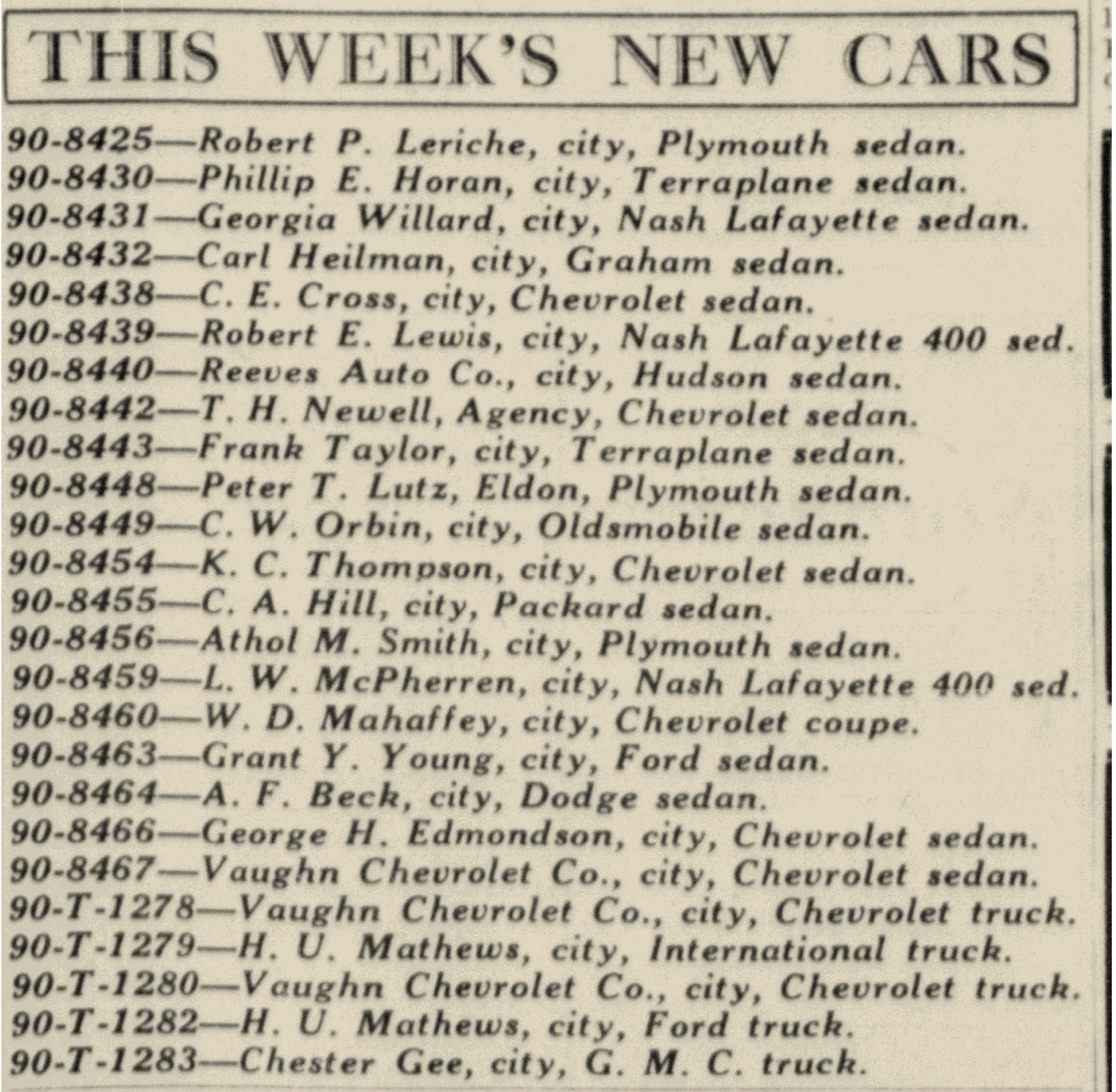 I’m not sure exactly when Miss Willard began to focus her teaching on students with learning differences and pioneered an ungraded classroom to serve students with special needs. The above article is from 1935. During the Iowa State Teacher Convention in 1932, she was elected president of the group “Teachers of Atypical Children.” At the convention in 1933, she presided over this part of the program.

A brief look around the internet for the history of special education didn’t yield much information. Much of what is written follows the passage of the Education for All Handicapped Children Act and the Individuals with Disabilities Education Act – both passed in the 1970s. The beginnings of a grassroots effort by parents and advocacy groups for the inclusion and accommodation of special needs children apparently began in the 1930s. Prior to that time, these children were either educated at home or sent to institutions or private schools. Miss Willard was right in there at the beginning of the movement and the use of the word “pioneer” seems appropriate – especially in a small town in Iowa.

As for my experience in Miss Willard’s 1st grade classroom, I think she approached us with the same principles described in the article above. Miss Willard focussed on the individual needs of each student. Her classroom had an atmosphere of contentment. She hoped to instill in us a desire for education. Her classroom was cheerful. There was singing and story telling and character training.

As a child who was not quite ready to perform what was asked, how differently might I have felt about school and myself if not for Miss Willard?

I do wish I still had that saucer, but feel very lucky that my mother took these photographs of Miss Willard to help keep her memory alive for me.

This is my contribution for Sepia Saturday this week. Miss Willard never looked like the folks in the prompt photo! Prepare for stern looks as you visit other participants here. 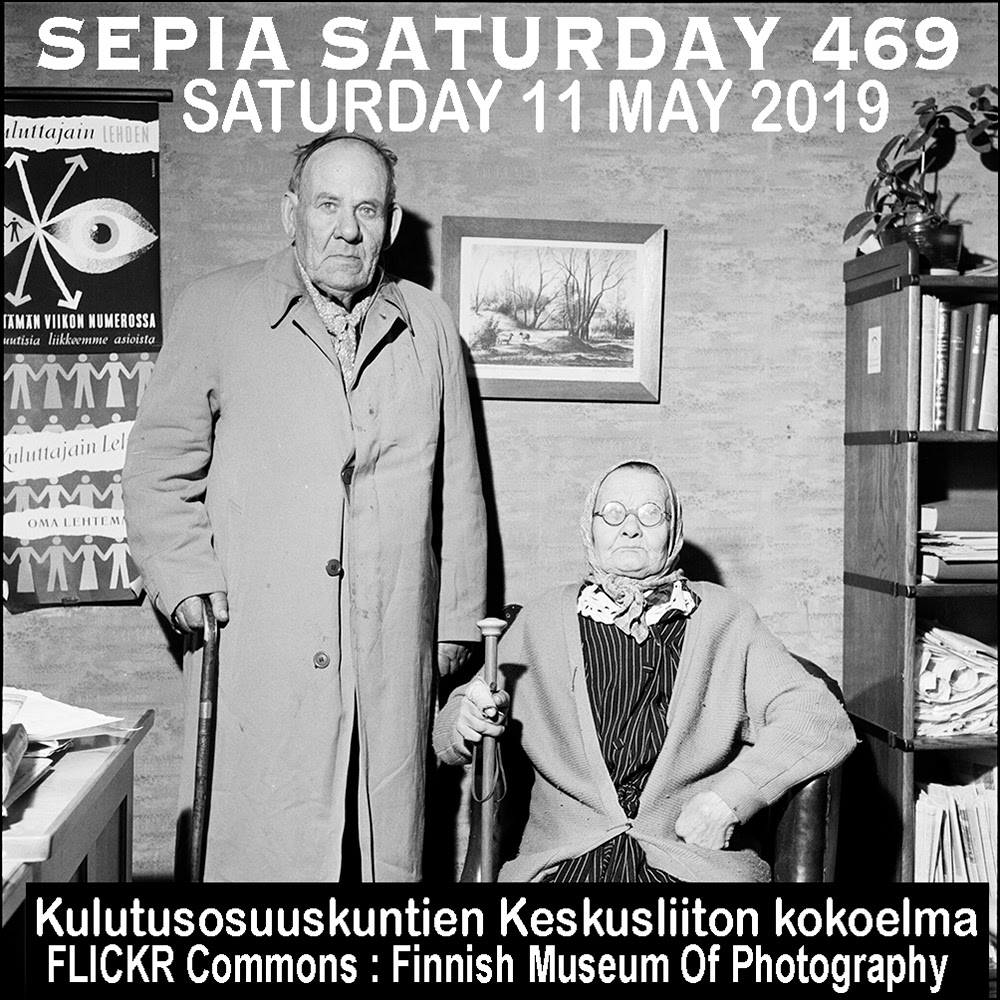 9/5/2022 I just learned about a blog party at The Family Heart blog and linked this post there.

16 thoughts on “Sepia Saturday – A Teacher of Atypical Students”