When I tell people that my Grandmother Eveline set her place at the table with a butcher knife so she could hit you with it if you misbehaved, they get the wrong idea. 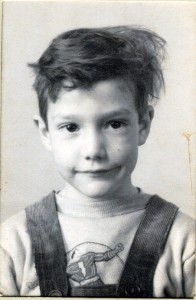 I hear he was a bit of a mischief maker….and then there were his two older brothers…. and maybe his two older sisters weren’t always perfectly behaved either.

And anyway, she wouldn’t have hit you with the blade end. She held the knife by the blade, thus assuming any risk of serious injury herself. The butcher knife was merely an extension of her arm with a heavy wooden “hand” on the end of it, allowing her to deliver a whack on the hand to a deserving miscreant sitting anywhere at the table.

By the time I came to live at Grandma’s house most of the kids were grown, although Uncle Mont (the aforementioned mischief maker) and Aunt Wilma were still in high school. Even so, the butcher knife remained on the table at mealtime. It was enough to make me behave just knowing it was there.