My memory of the JFK assassination is more about me than the “big picture”. I was pregnant, had gone for my doctor appointment in Junction City, KS. for what I hoped was my last appointment before Alice was born. The receptionist (a Mrs. Eisenhower who was the widow of President Eisenhower’s brother Roy, a pharmacist in Junction City), was quite upset and told me as I was leaving that President Kennedy had been shot. We were 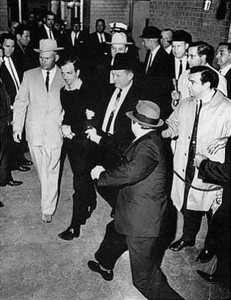 glued to our little black and white TV for days.

On the following Sunday, after Church and Sunday dinner, I had taken a nap. When I wakened, Bill told me that Jack Ruby had shot and killed Lee Harvey Oswald. I just remember the news showing the two shootings over and over. AND—I waited two more weeks for the birth of our daughter, Alice.

I guess the uniqueness of my story is my “connection” with 2 presidents that day.

I’ve pieced together the following from talking to my husband, calling my mother-in-law, emails from my husband’s siblings and a little internet research….

As a Catholic Italian-American family, my husband’s family was very happy about the election of John F. Kennedy as President. The women especially – my husband’s great-grandmother, grandmother, and mother – were quite taken with him. 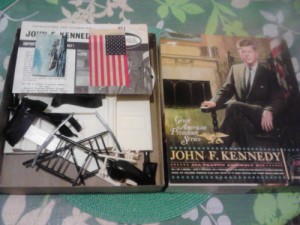 Rick (my husband’s brother) and I remember that Nana (their ggrandmother Tenna Mamola Parlati) had a picture of JFK displayed in her home. My husband, Martin, assembled and painted many a plastic model (mostly airplanes) as a child and made a model of JFK sitting in a rocking chair for Nana. There a few for sale on ebay today – with quite a wide range of prices!

I found these two pictures clipped from the newspaper and glued to cardboard (probably for display purposes) among some of the family memorabilia. 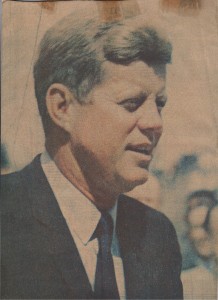 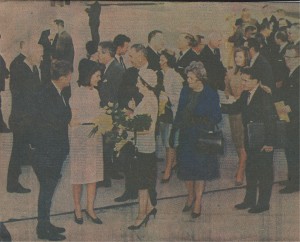 Martin thinks they belonged to his grandmother, Angela Parlati Loverde, or Nana. They were clipped from The Houston Post published Friday, November 22, 1963 – the day of Kennedy’s death. The photos were taken during Kennedy’s visit to Houston on Thursday, Nov. 21st, 1963. Of course, the paper was printed and delivered hours before the shooting in Dallas. 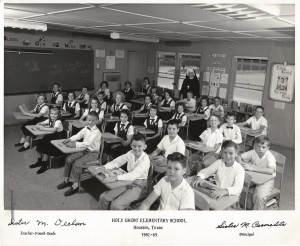 Both Martin and his sister, Janet, remember walking from the house where Nana and their grandmother and grandfather Loverde lived to Rice University to see President Kennedy. It was September 22, 1962 and JFK was about to give his famous speech to get the country behind him in supporting the space program. Martin was 9 and Janet was 7, so their memories of the day are a little vague. Their mother was with them and possibly his great-aunt Rosie and a couple of other women in the family.

They all remember watching the car driving down Main Street close to Herman Park and into the parking lot at Rice Stadium and watching JFK and LBJ sitting up on the back of the convertible. My husband took a home movie with their 8mm camera, but we unfortunately don’t have access to it right now. (We think it is in storage while brother Rick is building a new house.)

Rice stadium is quite large so the stands were not filled, although newspaper accounts report that 40,000 people were in attendance. The President was scheduled to speak at 10:00 a.m. and it was apparently a hot and steamy day. Classes had not yet started at Rice University, but incoming freshman were on campus for orientation. Reports say that the stands were mostly filled with young people – the incoming Rice students as well as bus loads of high school and elementary school children.

Martin and Janet don’t remember much except for being in the large stadium, far away from the President, and the crowd of people. Their mother said that the president’s complexion look reddish/ruddy to her – something she said you wouldn’t notice in the mostly black and white photographs of the time. The following video contains snippets of the speech, the context of the speech, and photos from the day.

Martin’s mother said she heard that the president had been shot while shopping with her mother at Craig’s Department Store in the Village –  a retail area also known as Rice Village because of the proximity to Rice University. She doesn’t know if there was a radio on or if people were talking about it and they overheard. They left and went home and started watching the coverage on TV.

Martin and Janet learned about the President’s death at school. Janet said:  My memory is of watching the funeral on TV and Mom crying. The other thing that has always stuck in my mind was that I was sitting in my 4th grade class at Holy Ghost (Mrs. Agnes class) and they announced it over the intercom.  One of the boys in my class – Larry Corti turned red in the face and ran out of the classroom crying. 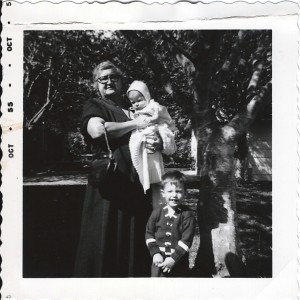 Like nearly everyone else in the country, the family was glued to the television set until the funeral was over. Martin’s mom especially remembers how they all saw Jack Ruby shoot Lee Harvey Oswald live on TV.

And there were a lot of tears. Martin’s youngest sister, Marilyn, was not born at the time, but had heard that her mom and Nana had cried about it for weeks. When I talked to my MIL today, I asked if she had been watching all of the 50th anniversary specials that have been on this week. Of course, she had, and had been brought to tears again. Long after President Kennedy died, my husband painted a plaster bust for his mother and it is still displayed in her home.

I also found a publication from Holy Ghost School devoted to student writing after the death of President Kennedy. Neither Martin nor Janet have a contribution included, but it provides a look into the thoughts of these young people attending a Catholic school in Houston, TX as they reflected on the death of their president.

I’m linking this to Sepia Saturday, so I’ll include today’s prompt picture and encourage you to visit the other participants. 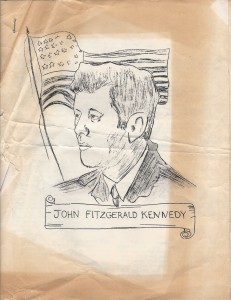 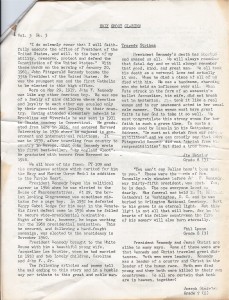 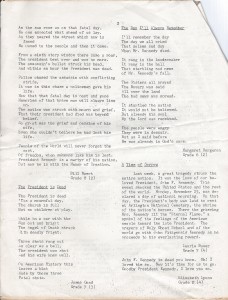 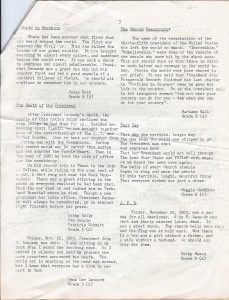 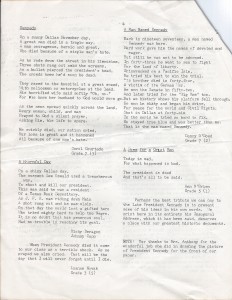 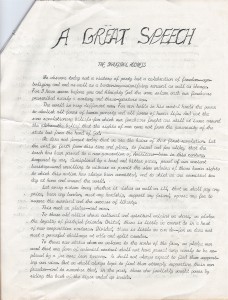 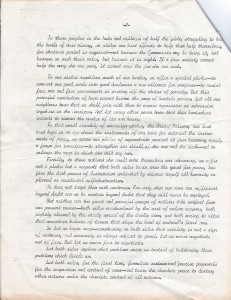 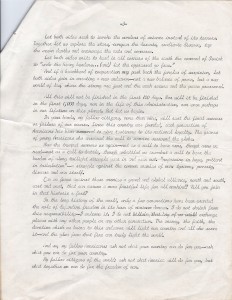 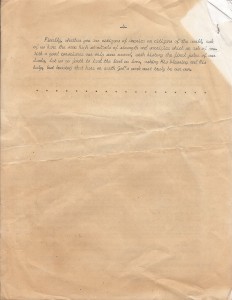 6 thoughts on “Our Family Stories: JFK – Memories from the Steps and In-laws”