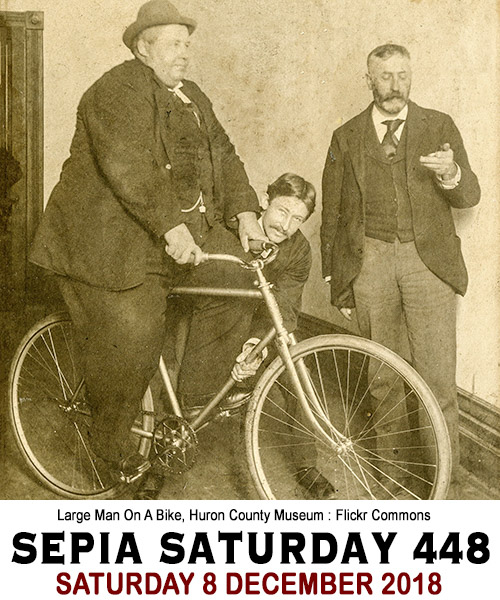 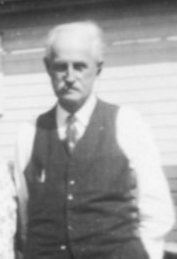 Sitting outside Charles’ and Abbie’s place along highway 63 in southeastern Iowa, my dad and his grandfather, Myron D. Webber, were enjoying a quiet chat one evening. The sun had set and they watched the few cars that passed by as they talked. The truck stop was situated between corn fields at a junction of two highways. Grandfather sat cross-legged in one of the metal lawn chairs in front. He had a stately appearance – tall and thin, with a handlebar mustache. A Baptist preacher by calling and profession, he supported his large family doing plastering on the side.

The quiet was broken by the sound of a motorcycle approaching. This was nothing unusual. My dad owned a business on this same property where he sold and repaired motorcycles and he did his best to encourage his neighbors to enjoy the benefits of motorcycle ownership.

Unlike the other vehicles that had passed by, this one did not have its headlights on. The lights from the truck stop brought the approaching motorcycle into view. A ladder stood upright toward the rear of the bike. The “driver” of the bike was on the ladder. His female assistant let loose a few helium-filled balloons and the man on the ladder pulled a pistol from his holster and shot them.

Grandfather Webber turned to my dad and said, “Gerald, isn’t that against the law?”

One could come to varying conclusions about my Great-grandfather’s comment. Was this event “lost on him” as my dad said when he told me the story? Was this a display of grandfather’s dry sense of humor, as another cousin remembers him having? Or was grandfather trying to subtly discourage my father from imitating the man – as another cousin suggested – because Dad raced motorcycles and liked to do some crazy things… ?

I heard this story for the first time a couple of weeks ago when I called my dad(Jerry) to ask him some questions about my grandparents’ truck stop. (Carrying Bricks) The man shooting balloons from a ladder on a motorcycle in the dark was motorcycle stunt rider Putt Mossman. I had never heard of him before, so I did an internet search and sure enough, the memory my dad shared with me is exactly the kind of trick riding that Putt Mossman performed. Putt had stopped in to dad’s motorcycle shop on a few occasions. When he came down the road that night, Dad knew exactly who it was.

Putt Mossman was born in 1906 and grew up on a farm outside Eldora, Iowa. His first claim to fame was as a horseshoe pitcher. He won the state title in 1924 and, at the age of 18, the world title that same summer. He repeated this achievement in 1925. Putt also designed a uniform for horseshoe throwing and designed and patented a special horseshoe for competition. 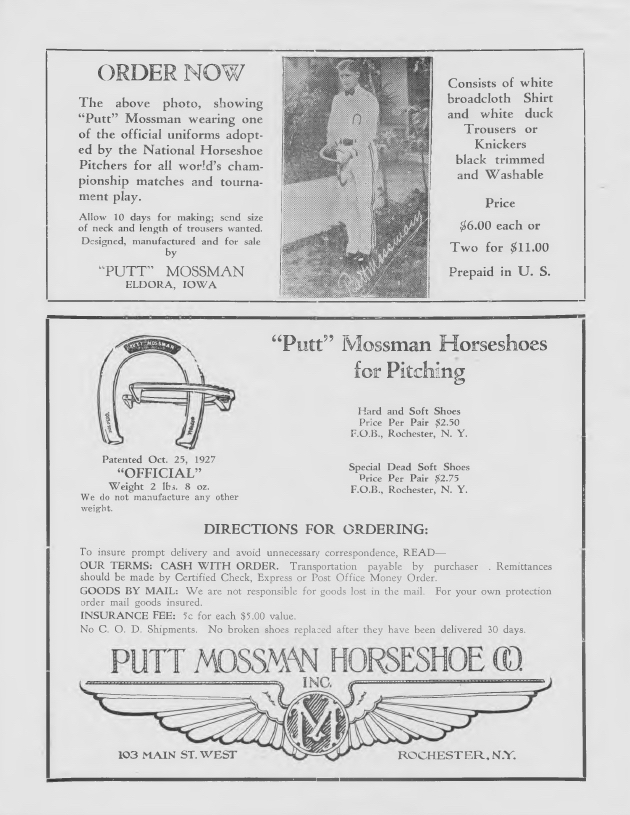 Putt Mossman seems like a man who was always on the move and always trying something new. And maybe always looking for a way to earn some cash. Besides his accomplishments in horseshoe pitching, he also earned a world title in high kicking, pitched semi-pro baseball, and was a junior lightweight boxer. My dad described Putt as a short, strong guy who could stand on your living room floor, squat down, and jump up and touch the ceiling with his feet.

As Putt Mossman is said to have told the story, he got his first motorcycle at age 20 and did his first stunt (standing up on the seat) a couple of days after he got it to impress some young ladies who caught his eye. 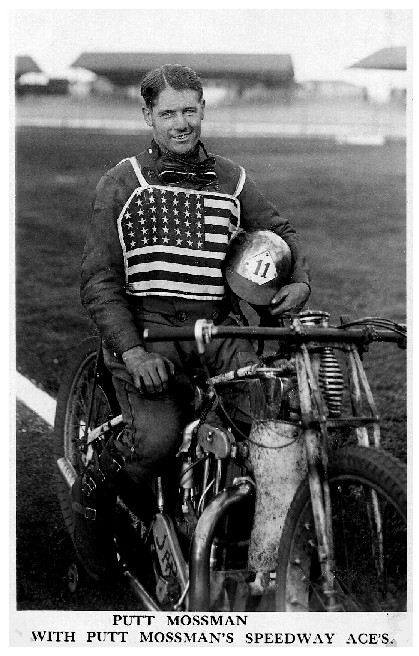 He did some motorcycle racing, but was known more for his stunt work. He performed in Asia, Europe, Africa, and Australia and New Zealand. I won’t attempt a biography of his life, but will share a few more photos.

He kept a busy schedule 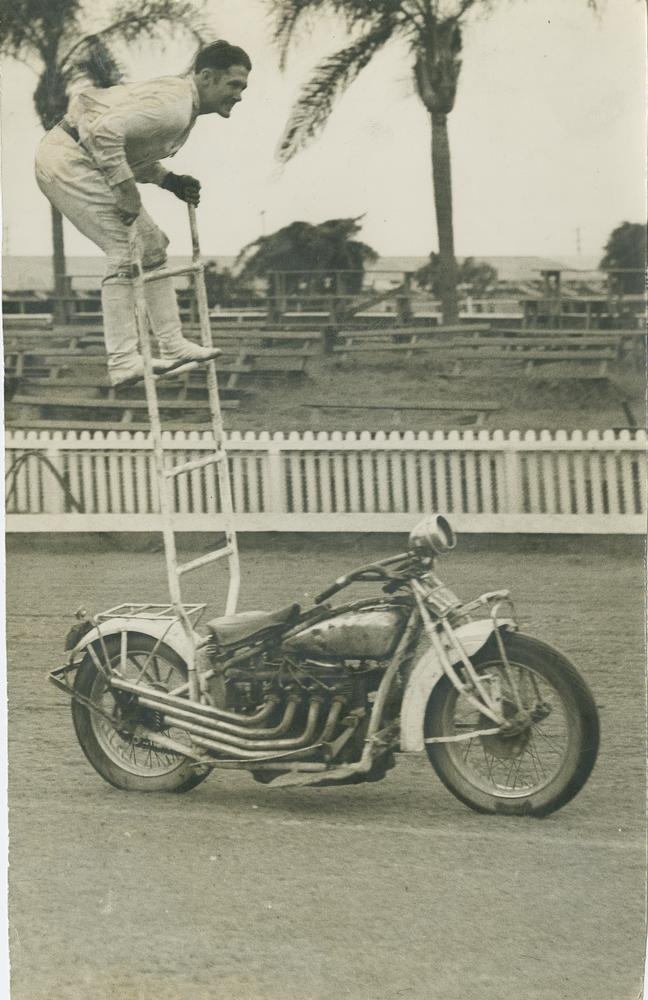 He took some spills over the years, broke some bones, received some burns, but rarely missed a show. 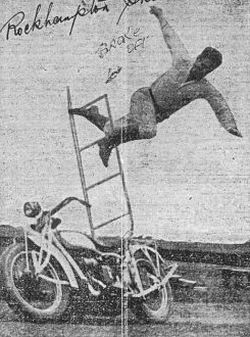 A bigger gun than he used while riding past my dad and grandfather. 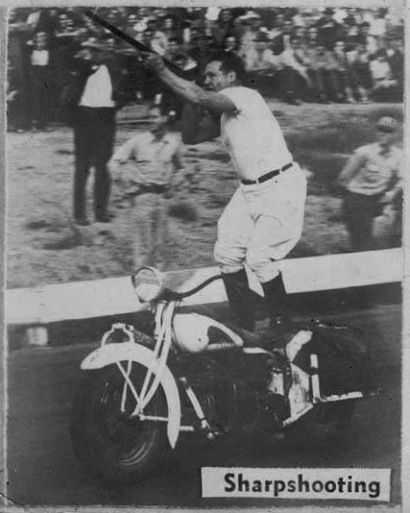 In darkness on a motorcycle between two walls of fire. 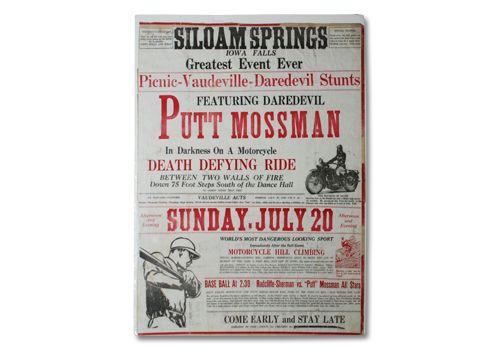 Putt Mossman also did stunt work in Hollywood. He always seems to be wearing a shirt with the horseshoe logo he designed. 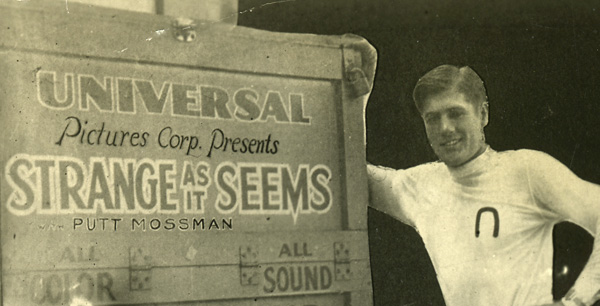 Jumping into the Pacific Ocean for Universal Studios 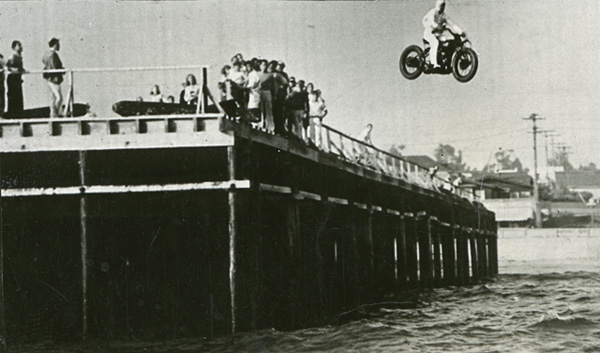 One of Putt Mossman’s last performances was on the Johnny Carson show. You can tell he is quite the talker. I think I read that he was scheduled for just a 10 minute interview, but Johnny kept him on longer. The interview starts at the 19:00 mark. Be sure to watch past the commercial breaks. There is a studio film of him doing stunts in 1931 after the first break and the bit with him throwing horseshoes is after the second break. True Johnny Carson.

I’ll end with a couple of family photos. My dad doing a Hill Climb competition in 1953 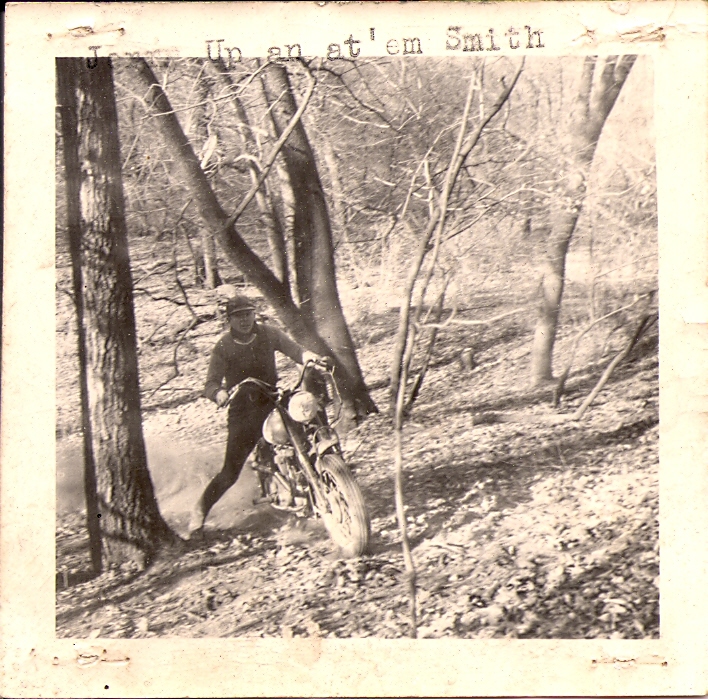 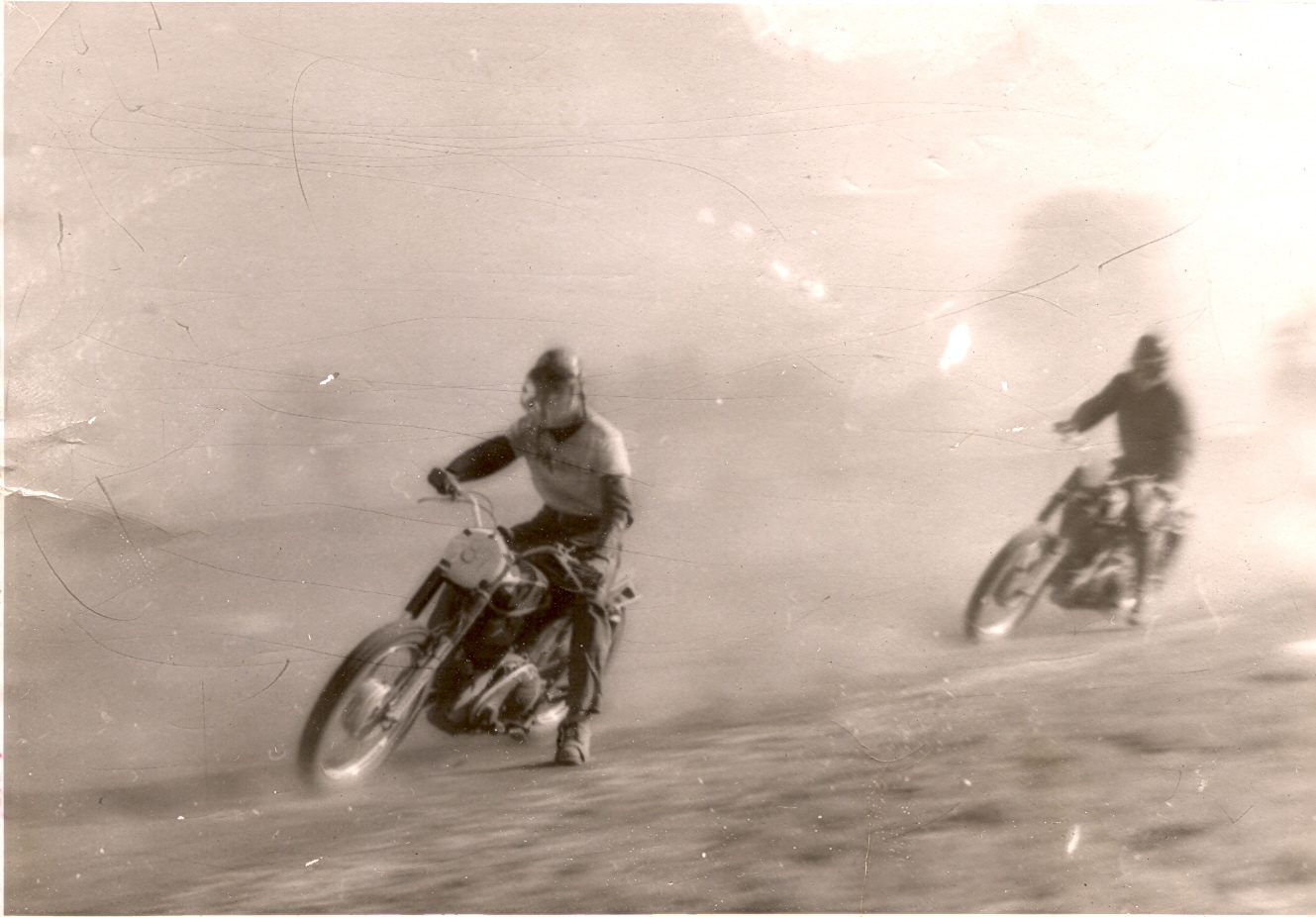 He did a few stunts too, but not as extreme as Putt Mossman.

And here is Great Grandfather Webber, posing on a motorcycle. 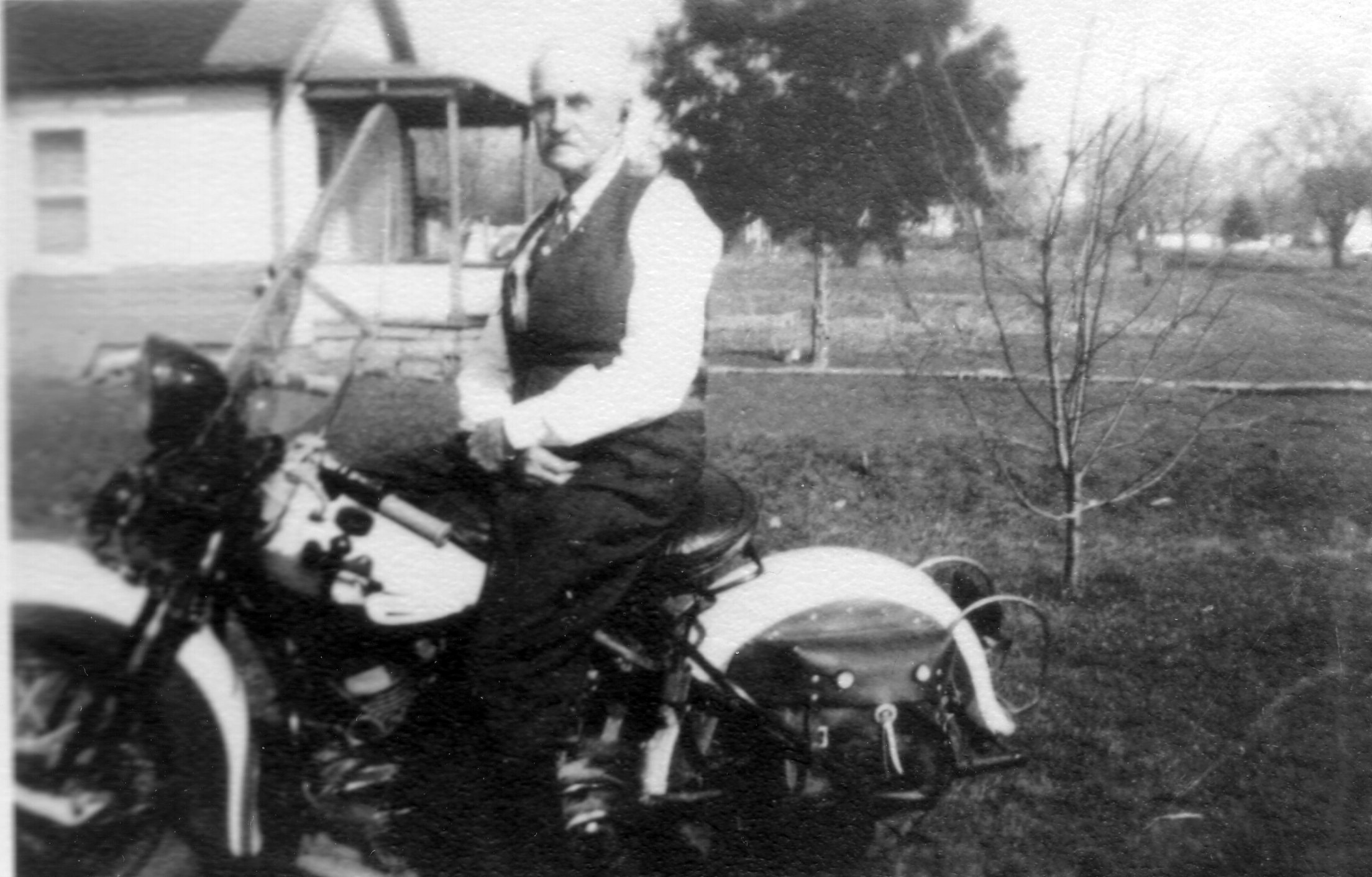 9 thoughts on “Sepia Saturday – Stunt Man on a Bike”