An Austin story B.C. (Before Children), sometime between 1975-1985.
A series of stories for each letter of the alphabet. The 70s were a long time ago. 26 stories might be a stretch for my brain. I have made it to C.

Another story set in our first apartment in Austin – River Hills Apartments. 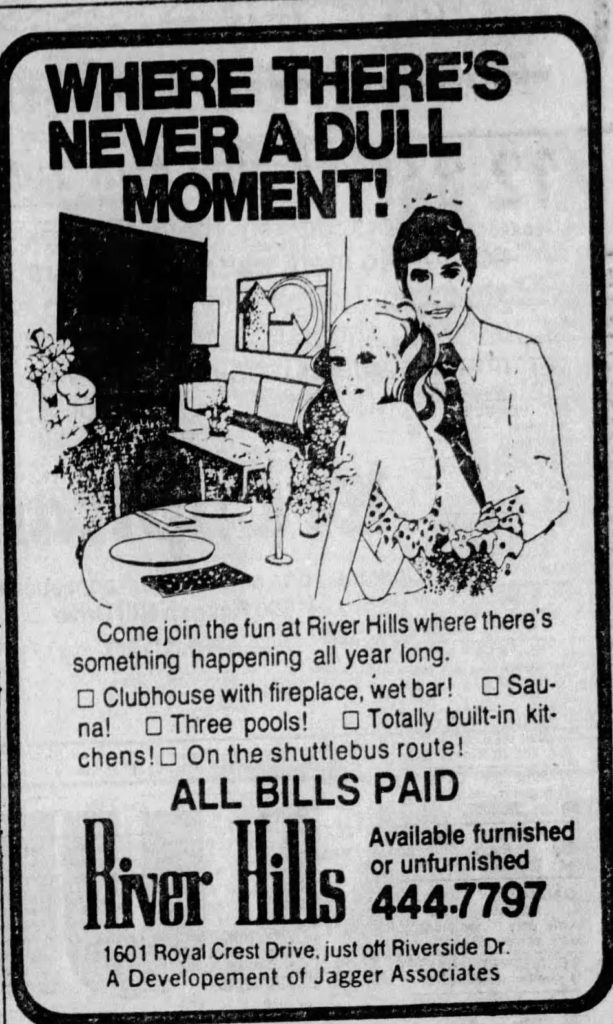 On the other side of a common wall lived a man, a woman, and a small boy. An assortment of other men, women, and children came and went, but these three were the permanent residents. Their car was an old yellow taxi cab they had personalized. Where the company logos used to be now there were black skull and crossbones: symbols of death, poison, and pirates. The woman worked as a flower seller.

There were lots of street corner flower sellers in Austin in the 70s, There were two competing companies, each with about one hundred employees who worked Thursday – Sunday. The vendors were dropped off at their designated location with a bucket of flowers. Some of them wore costumes to distinguish themselves and build a clientele. If you were driving down the street, you might see a flower seller ahead and have time to stop to make a purchase. And whether walking or driving, you knew what flower seller to expect on a particular corner. The vendors took home a third of what they collected in sales for the day. So $3.00 carnations yielded $1.00 to take home. I was the happy recipient of an occasional flower purchase.

My favorite flower seller was a guy who dressed in top hat and tails and could spin a carnation on his palm. He was a class act. My neighbor dressed as a clown and drove off in her pirate taxi cab when she went to work. I guess I didn’t often drive by my neighbor’s corner. I only remember seeing her once or twice somewhere in South Austin.

It didn’t appear that the man of the house had a job and the melee that ensued when the woman returned home early one day led us to believe that if there was any business going on, it was of the “funny business” variety involving one of the rotating house guests. There was a lot of yelling and stomping up and down the stairs on the other side of our common wall and some outside as well. It wasn’t long after that they moved out. My heart hurt for the little boy, who was just a toddler.

In addition to the Armadillo World Headquarters and bats, street corner flower vendors contributed to the vibe of 1970s Austin and our city slogan: Keep Austin Weird. I don’t know what happened to the people who lived next door to us, but there were some notable flower vendors. And here is where I digress from a personal story to the news bits I had fun reading and bringing “old Austin” to mind …

The most well-known flower seller is Crazy Carl Hickerson. I searched the local newspaper for articles about him and there are many! He became a “perennial” candidate for political offices – mostly Austin City Council; but also governor, mayor, and sheriff. He never won an election and never seemed to want to. 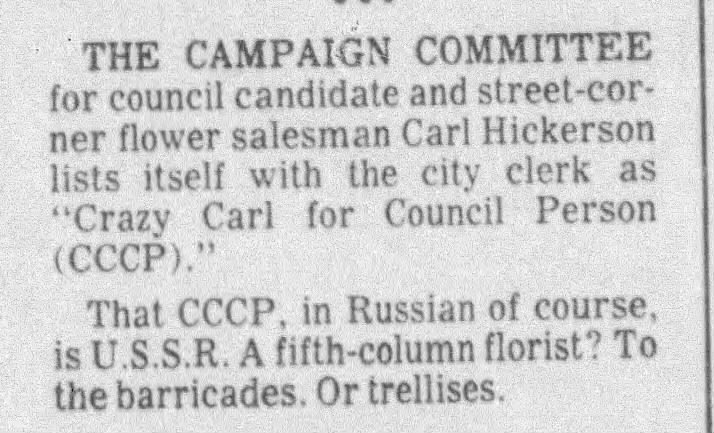 He insisted that his name be listed on the ballot as “Crazy” Carl Hickerson. Atheist Madalyn Murray O’Hair was also running for a place on city council that year. One of Hickerson’s quotable sound bites that year was, “I don’t have mental illness, but I am a carrier.” After losing in 1977, he was first to file for the 1979 election, then set a flower-twirling record. 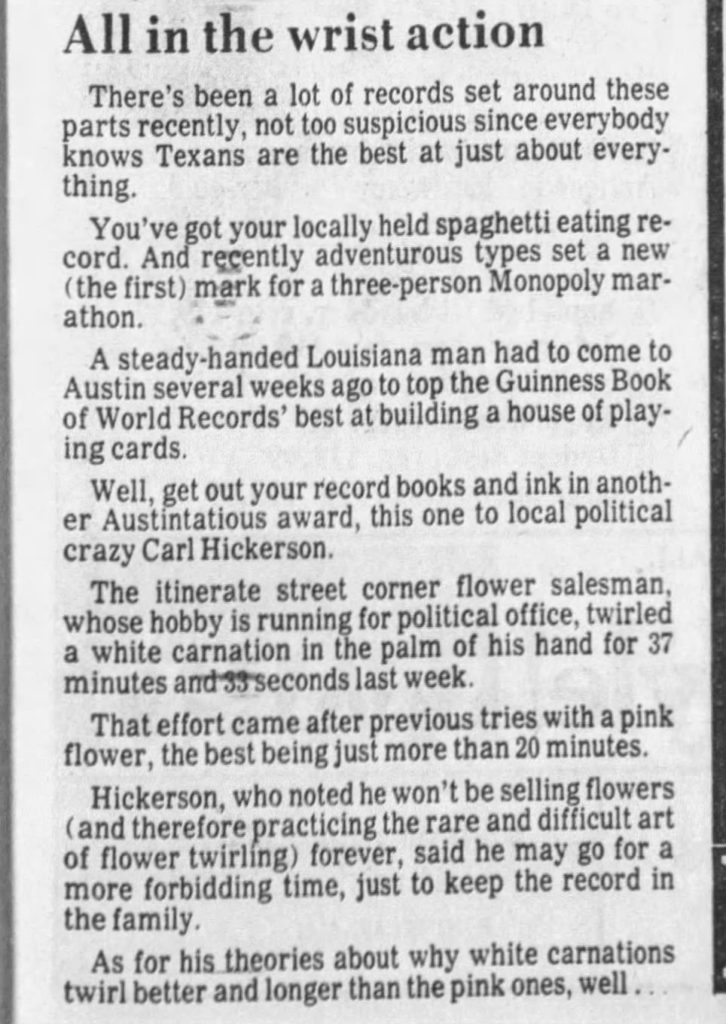 I could devote a lot of space to Crazy Carl Hickerson, but I’ll try not to. He continued to run for office into the 90s; sold flowers, drove a taxi, sold sandwiches, modeled for art students, and worked at Oat Willie’s – among other things.

He was arrested for disrupting the boat races on Town Lake by disabling the starting lights during a protest. 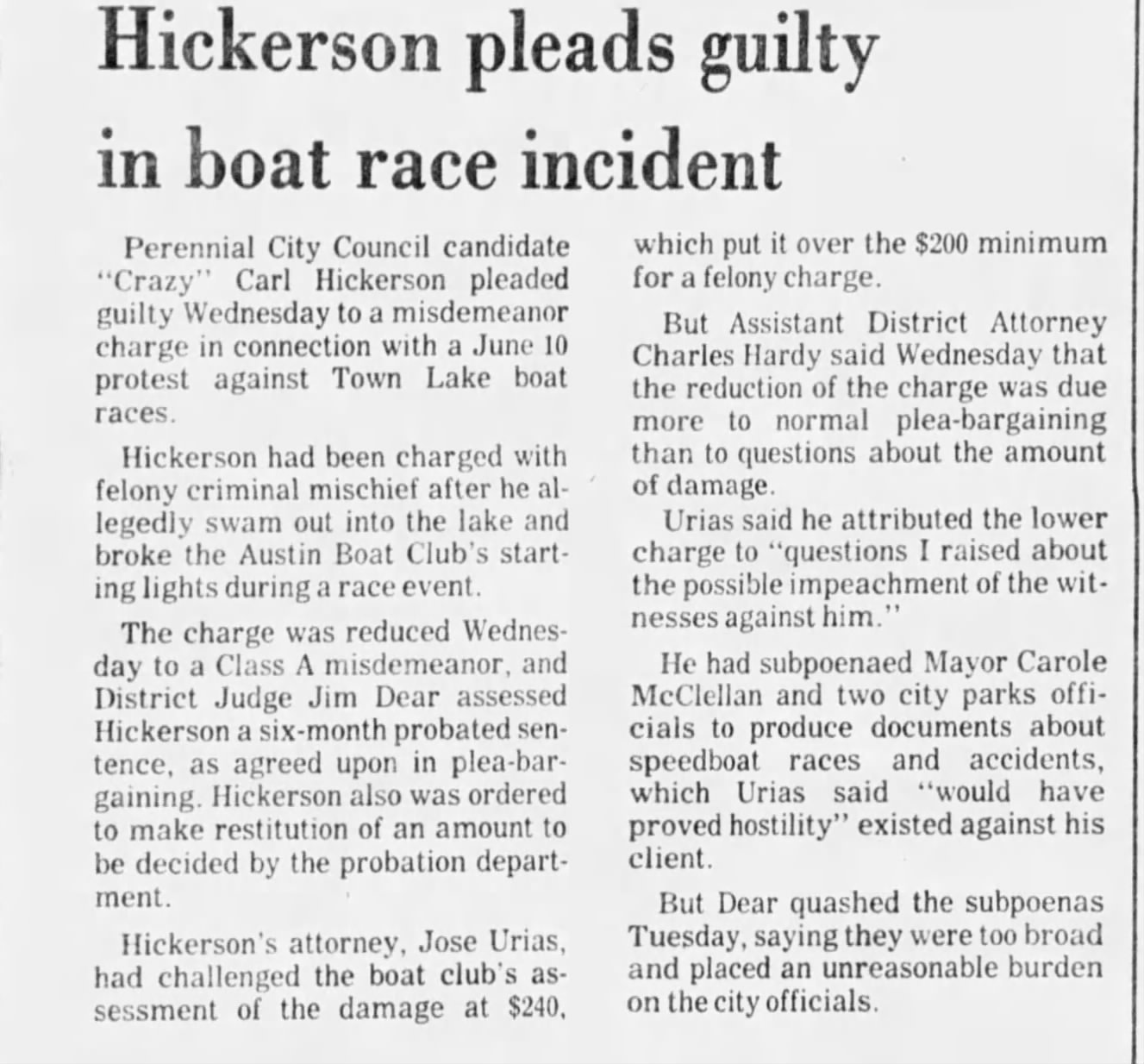 His political platforms usually contained some weird ideas, but many came to be mainstream. (STNP – South Texas Nuclear Project) 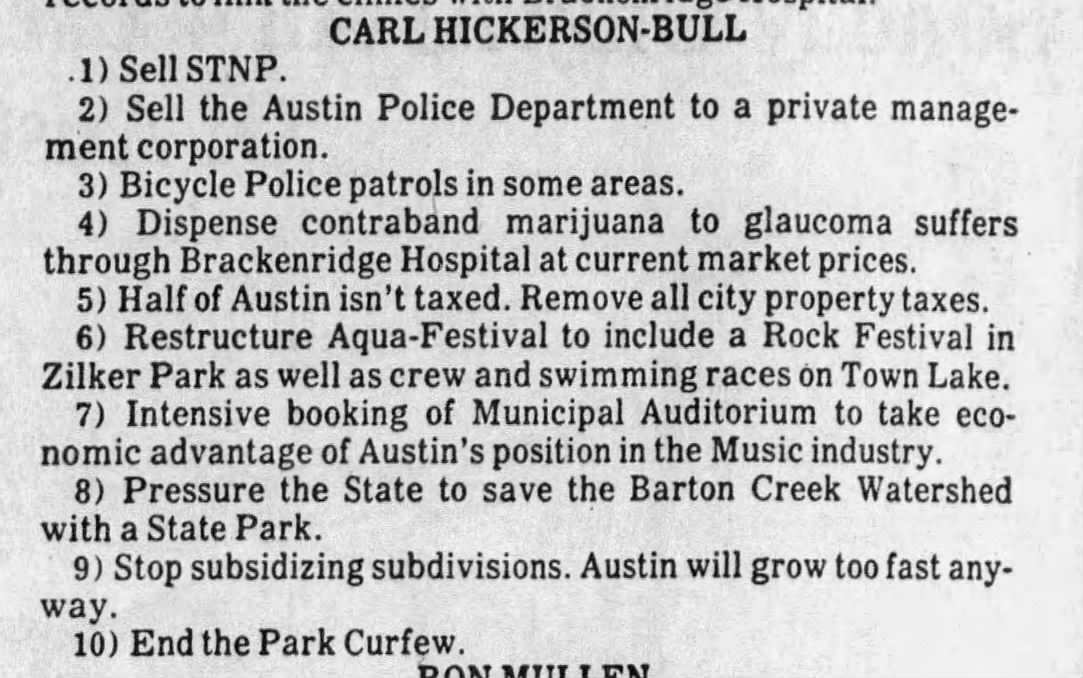 He sometimes sold flowers nearly naked and other times in more modest attire. That’s Carl on the left. 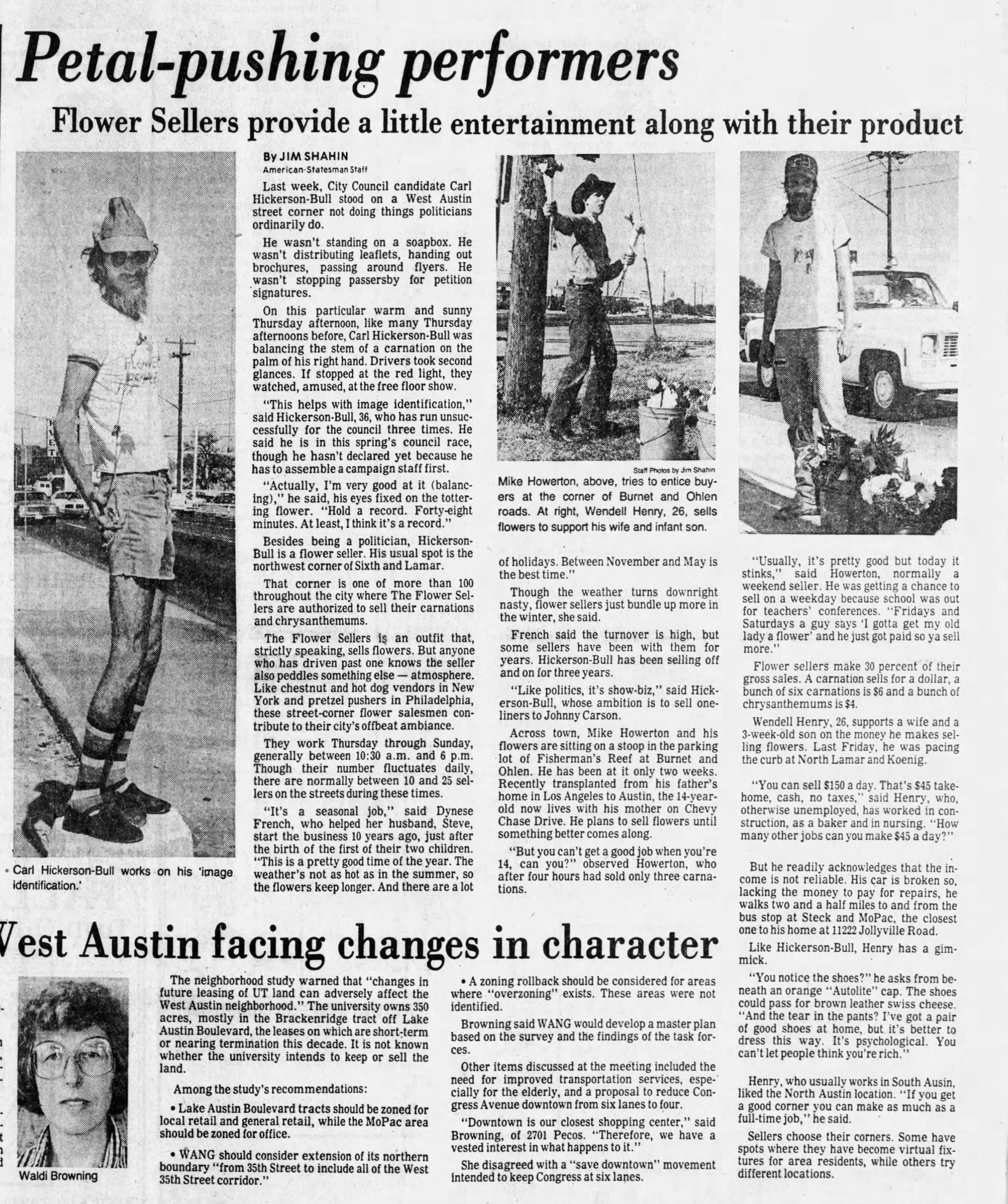 And sometimes entertained with his trombone. 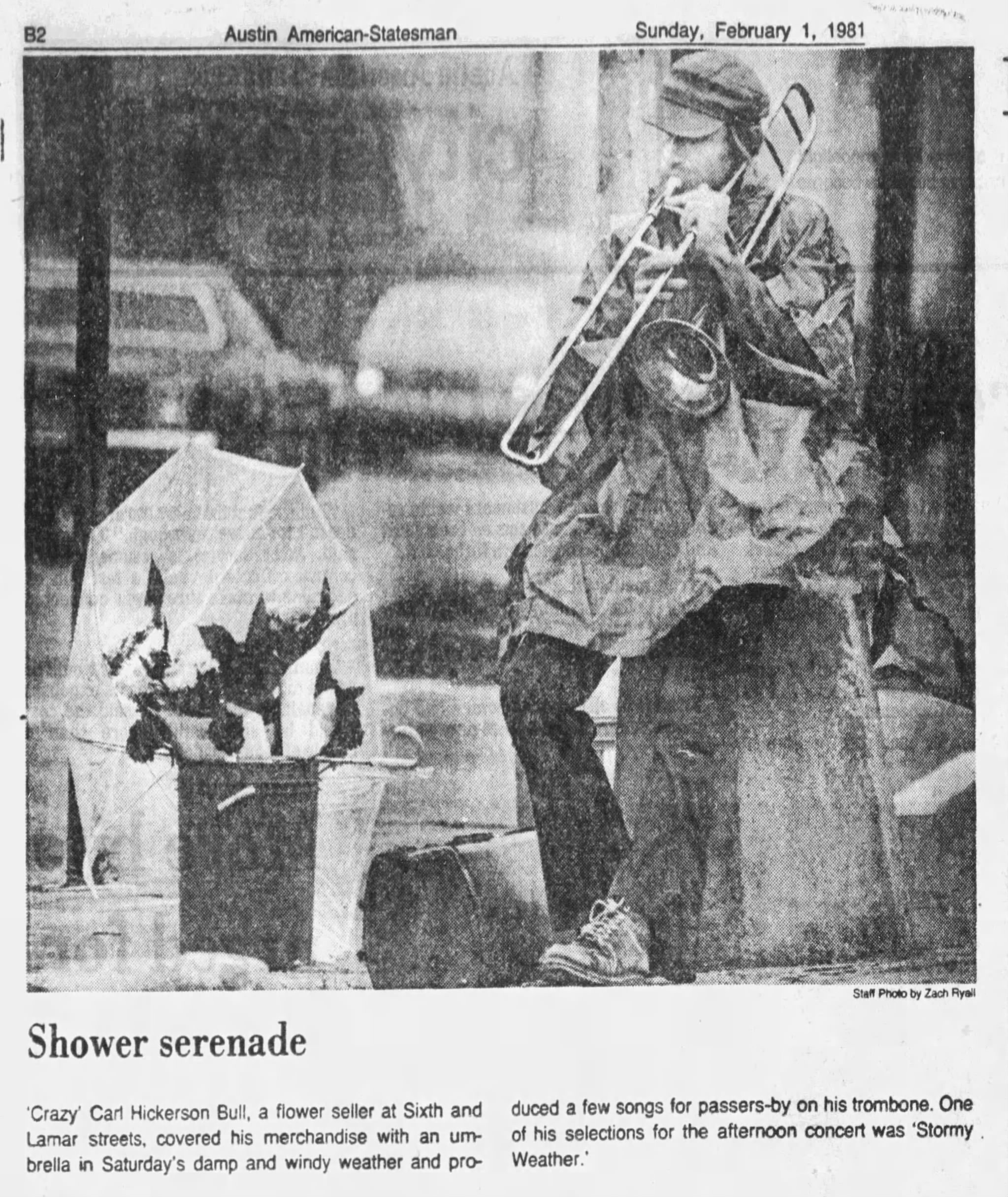 Later in life, Crazy Carl twirled flowers outside the street side window of Esther’s Follies. 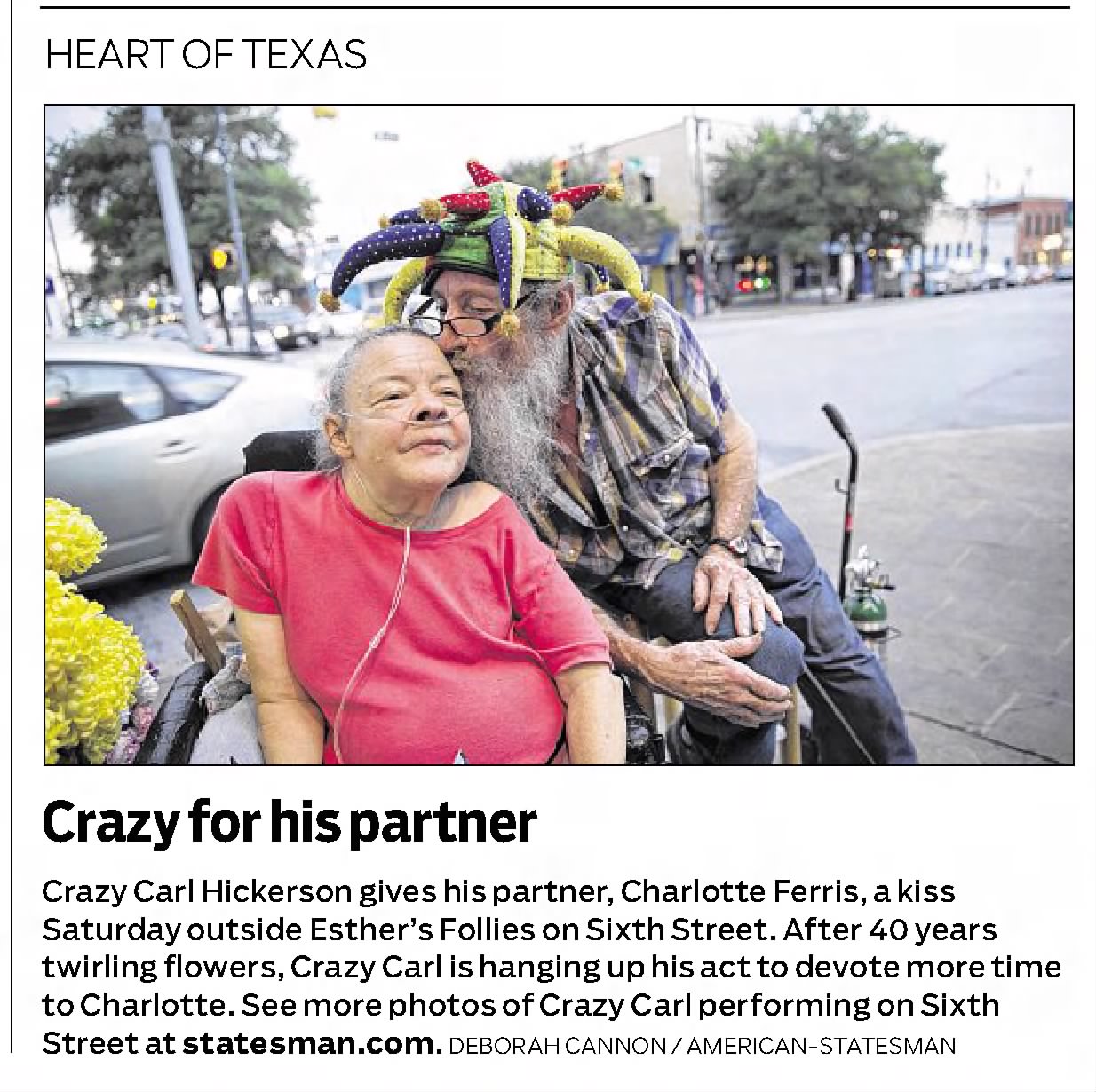 Max Nofziger sold flowers and played guitar at the corner of Oltorf and Congress. He followed Crazy Carl into politics, although he really did want to be elected. 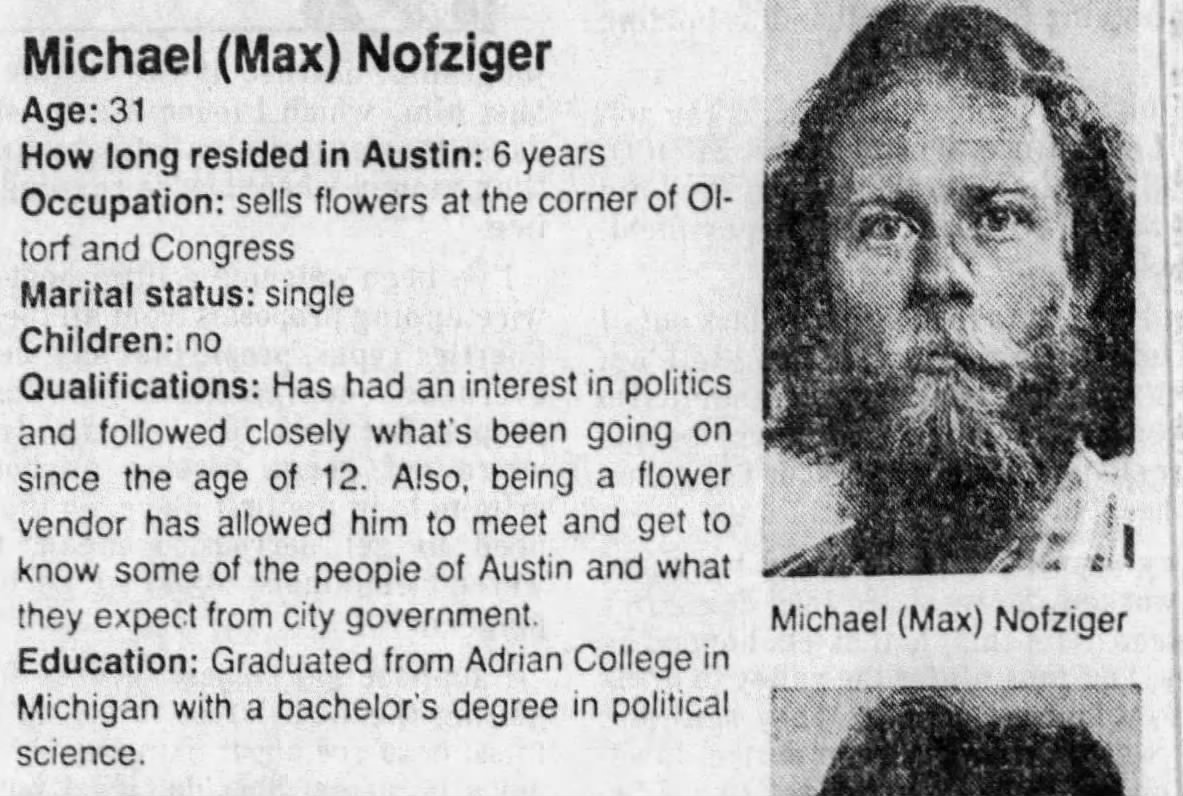 He ran a couple of unsuccessful campaigns, but got enough votes in the 1983 mayoral election to cause a run off, which gave him the power of his endorsement. He “cleaned up” his look for this race, which he figured added to his vote tally.

Max Nofziger served three terms on city council. He ran primarily on environmental issues.  When he retired from that position, Crazy Carl ran for his place. 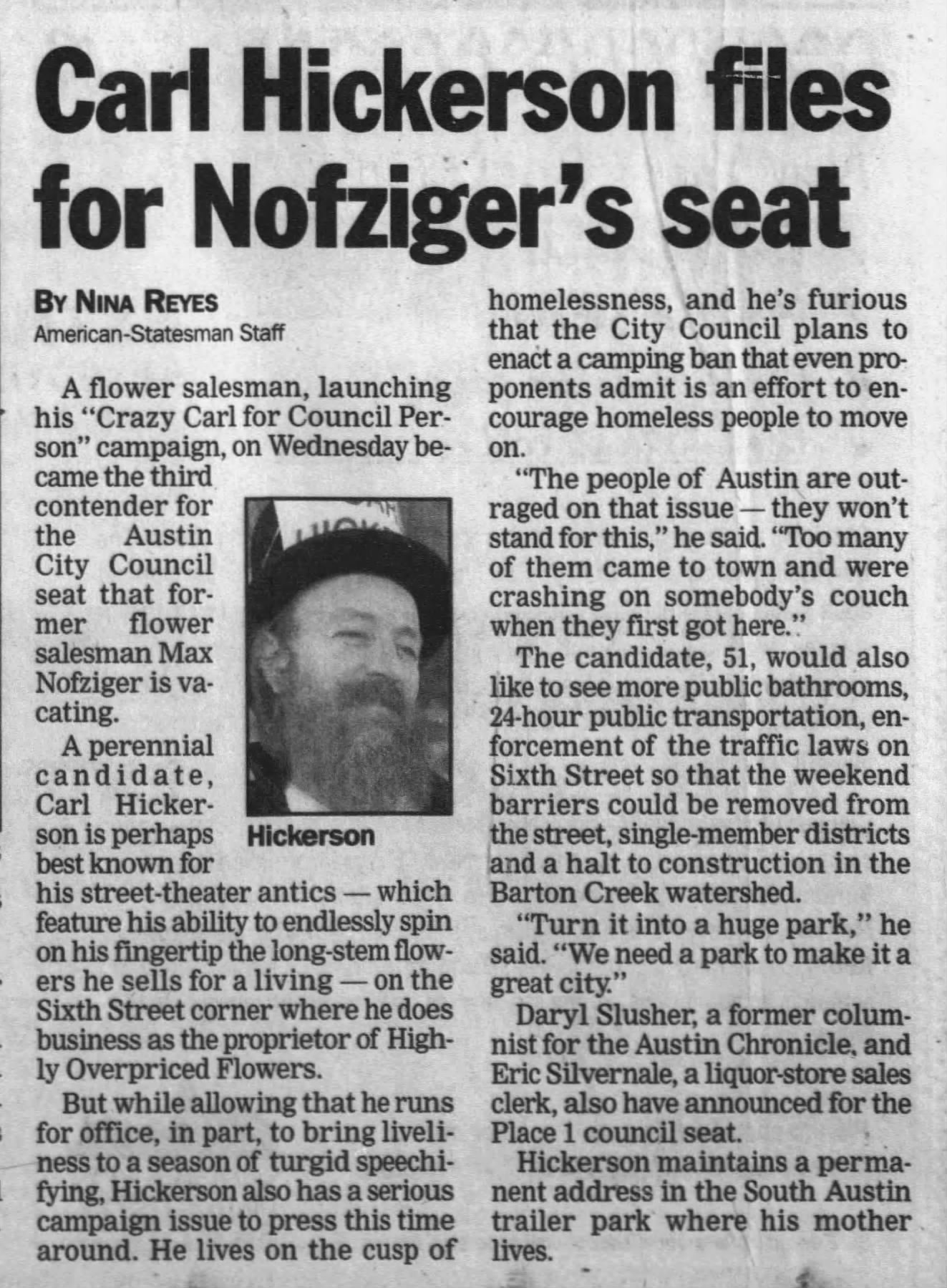 Sometimes people confused Max Nofziger with Crazy Carl. Nofziger pokes fun at it in this musical performance during a city council meeting as he left office.

Max Nofziger has maintained political influence, especially concerning environmental and transportation issues as a consultant and he has continued to pursue a musical career. 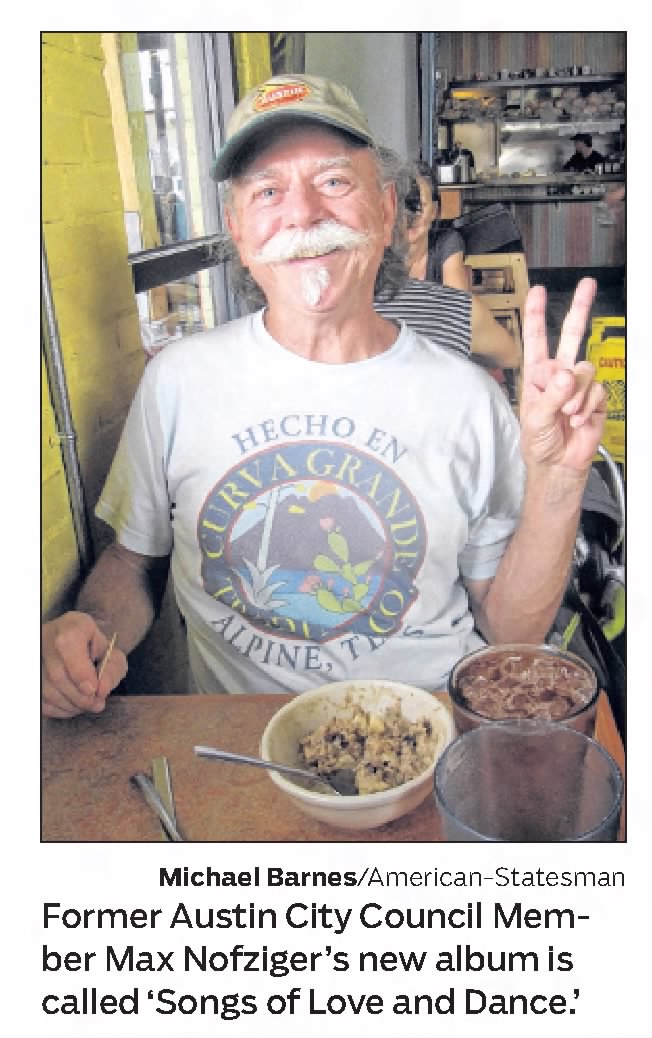 Carl Hickerson is featured in a couple of documentaries. I have only watched the first few minutes of the most recent one, but in those few minutes heard Eddie Wilson (Armadillo World Headquarters), Max Nofziger, and Shannon Sedwick (Esther’s Follies). And there is some skin in those first few minutes too. Edit: I posted the video before watching the whole thing – hopefully you won’t find it offensive – just weird.

This is my response to the Sepia Saturday prompt this week, focussing on the letter C rather than horses or racing. However, I do have a photo of horses at a busy intersection in Austin that I took from the car on Feb. 21. Austin still has its weird moments. 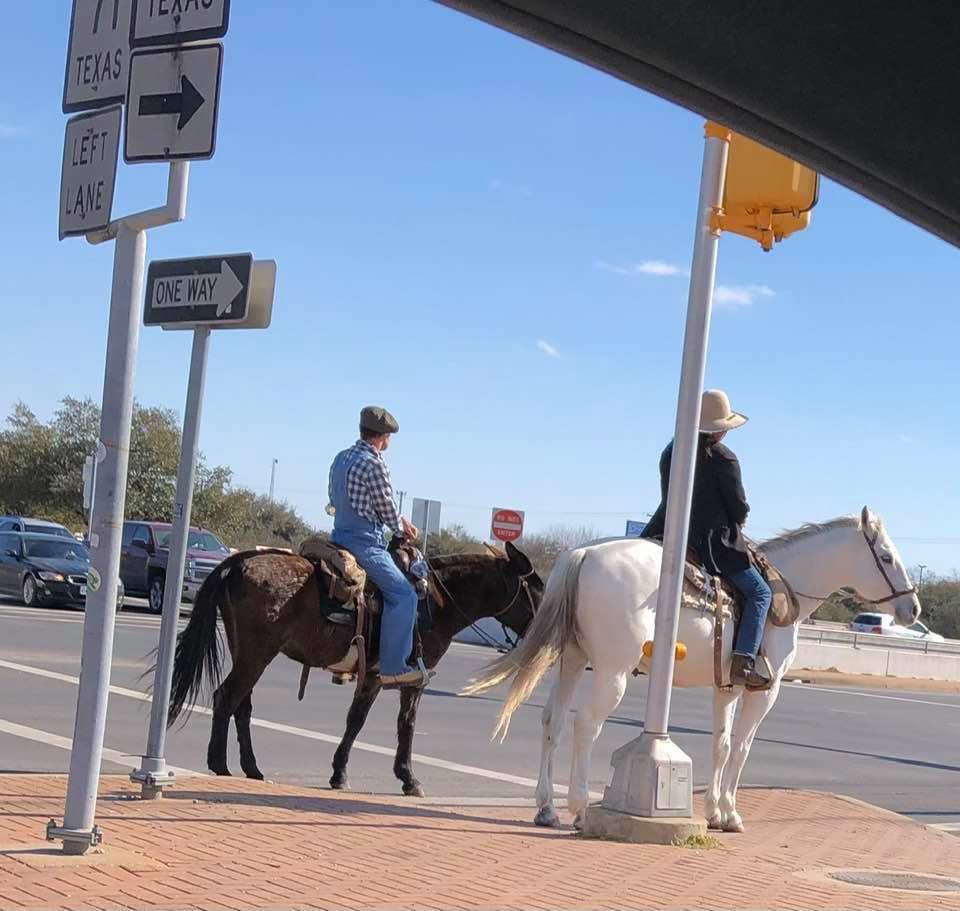 Please race on over to Sepia Saturday to view the other responses to this week’s prompt photo. 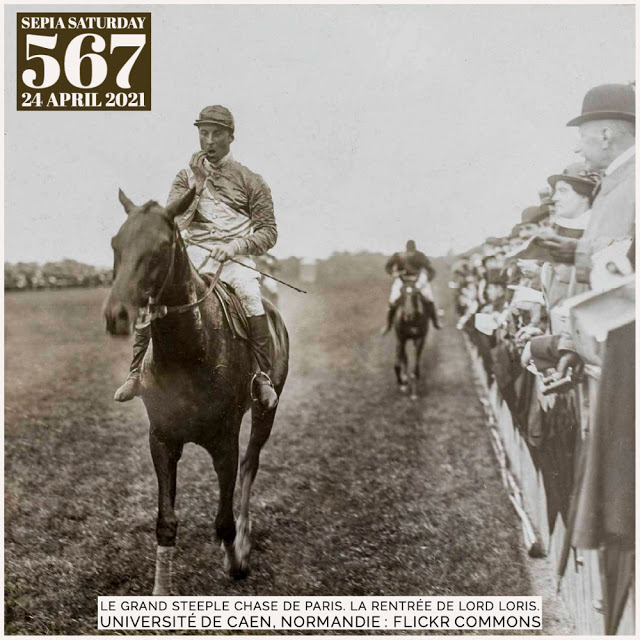 9 thoughts on “Austin Stories B.C. – The Clown Next Door”