My attempt to share stories for each letter of the alphabet featuring our life in Austin B.C. (Before Children) 1975-1985. The 70s were a long time ago. 26 stories might be a stretch for my brain, but I have made it to L – as has the Sepia Saturday prompt photo for this week.

I have not, in all honesty, “made it” to letter L. I missed letter K last week. Knot much kame to mind! Our son was here visiting and we hadn’t seen him since months before the pandemic hit and I just didn’t want to spend my free time at the komputer and I really didn’t have a klue what to write about. 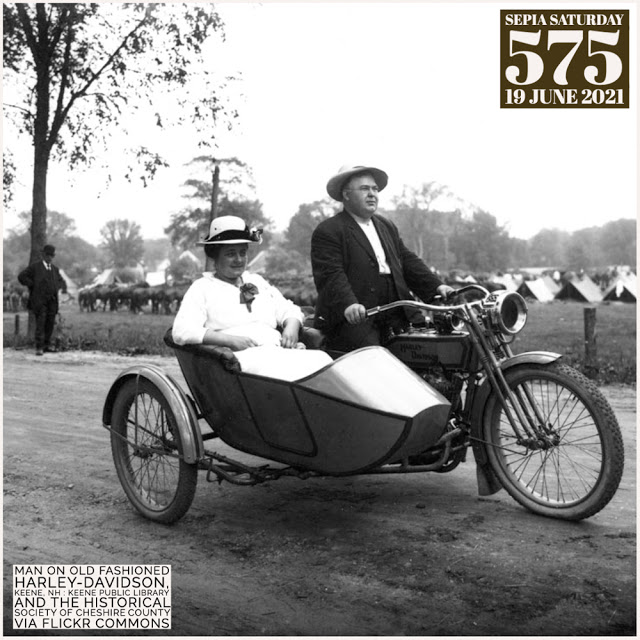 .. which brought to mind a small memory of a client I was assigned during one of my social work field placements while in graduate school. The client was a man and his young daughter. They had just moved to Austin from Pennsylvania, I think. Maybe it was Michigan. Somewhere quite a distance, anyway. The little girl was five or six at the oldest. Maybe four. They moved to Austin by motorcycle and sidecar!

The Sepia Saturday prompt photo for this week features the letter L and two people standing by a post for a photo. 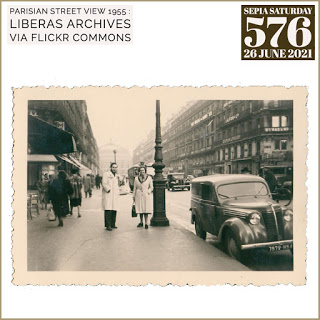 Lacking lasting remembrances linked to the letter L, I looked longingly for some lingering story line to fit my 1975-1985 time line. A las – I landed on people loitering by a post. I had hoped to find lamp posts littering our lot of photos, but lo, no lamp posts. At least the photos below fit my time line.

Here we have the photo every visitor to New Orleans takes. That’s me and my sister Kristie leaning against a street sign on Bourbon Street. 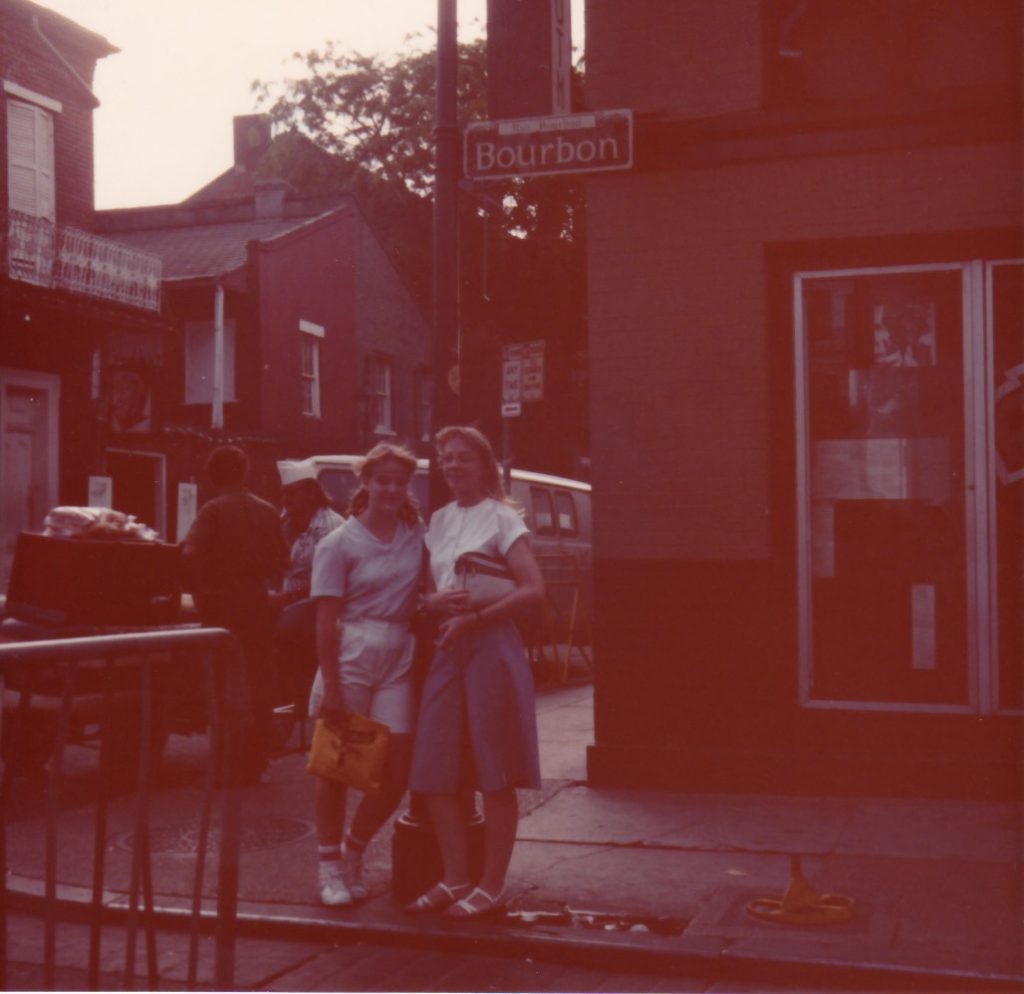 And a better photo of my sister Karla on a different corner of Bourbon St. 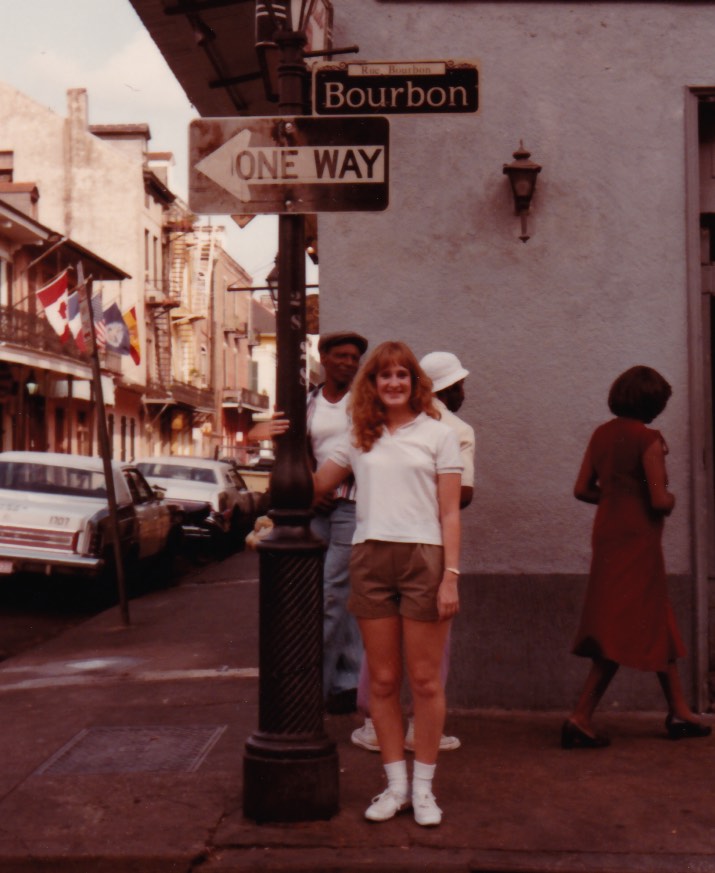 My parents invited us to go to New Orleans with them. I think it was 1982. Here is the group – minus my husband, who was the photographer. Wait! Where is Karla? Did we leave her standing on the corner of Bourbon Street? 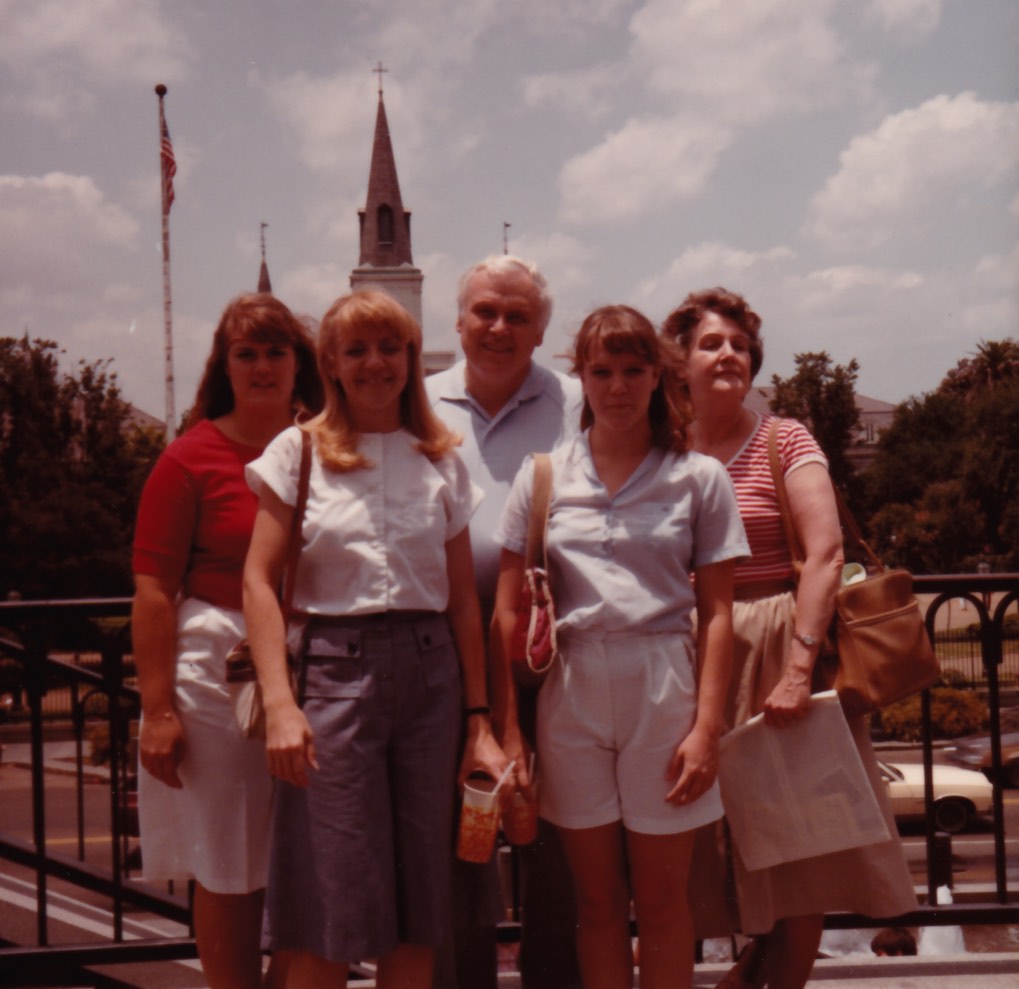 I don’t remember many details. It was very hot. We had the Sunday brunch at Commander’s Palace – which my dad really wanted to share with us. My first Eggs Benedict. We walked the French Quarter and took in shopping and food. An ice cream shop comes to mind. Surely we had beignets! I know we didn’t visit any of the bars on Bourbon St. that night. Mom was a teetotaler and the night life there was not her style.

The photo below was taken in Galveston – me standing beside a flag pole in front of the Ashton Villa. My husband and I went to Galveston in the fall of 1981. We toured several of the old mansions and ate seafood and he showed me the area where he and his grandfather used to go fishing. It’s funny looking at these photos and remembering the clothes. I think I made that shirt. 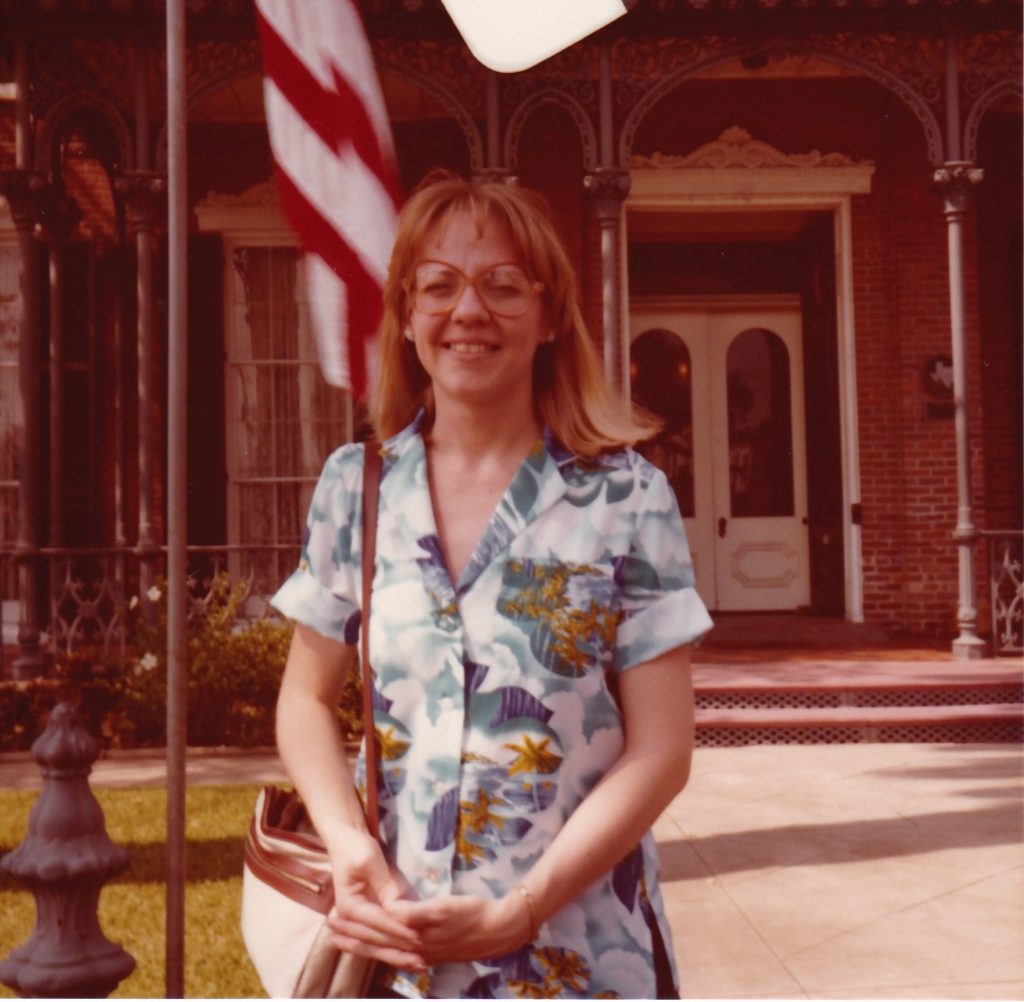 Not a vacation photo, and not exactly a post, but here is my father-in-law and his German Shepherd, Baron, posed beside a pine tree in their back yard. Baron was friendly, but pinned me up against the fence to lick my face, I guess. On his hind legs, he was taller than me. 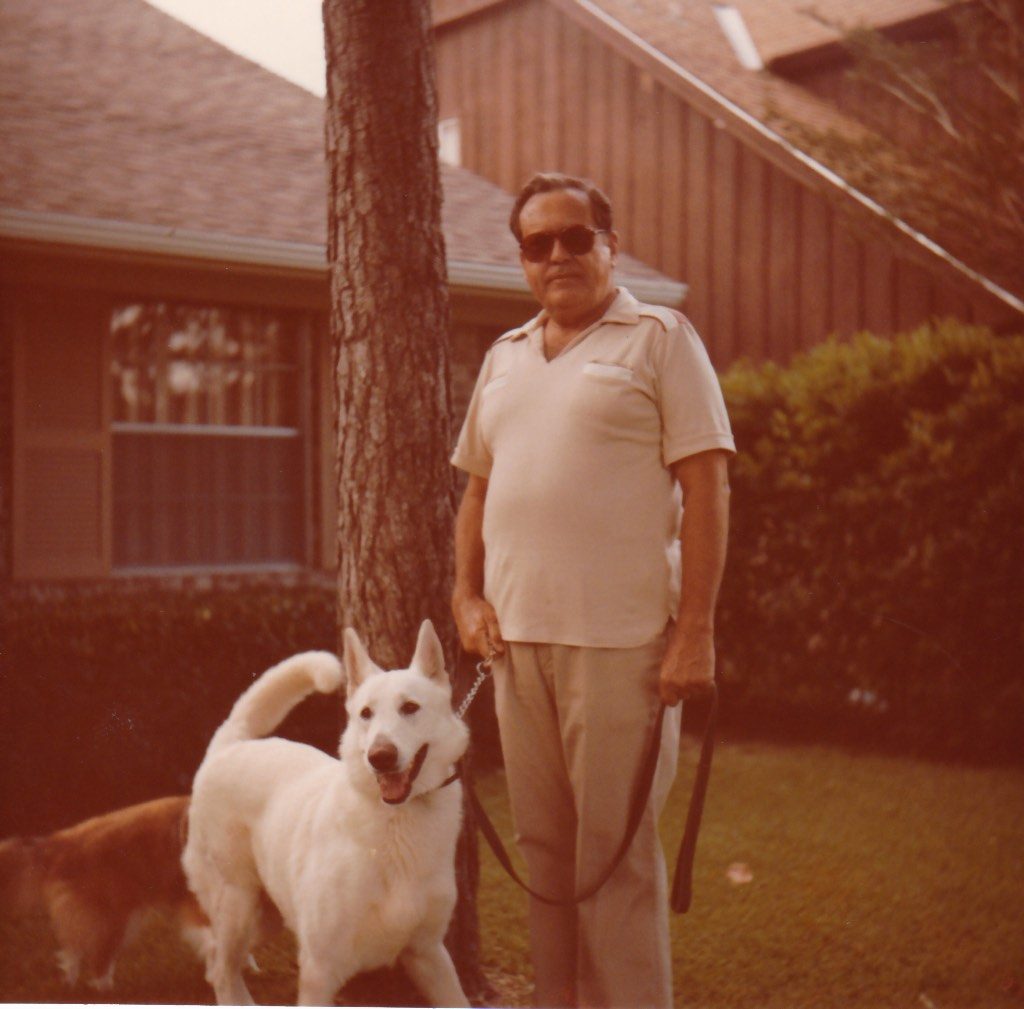 My husband spent six weeks in NYC in the fall of 1983 to train to be a broker for Prudential-Bache. One of the other trainees took this photo of him near a sign post in front of Balducci’s. 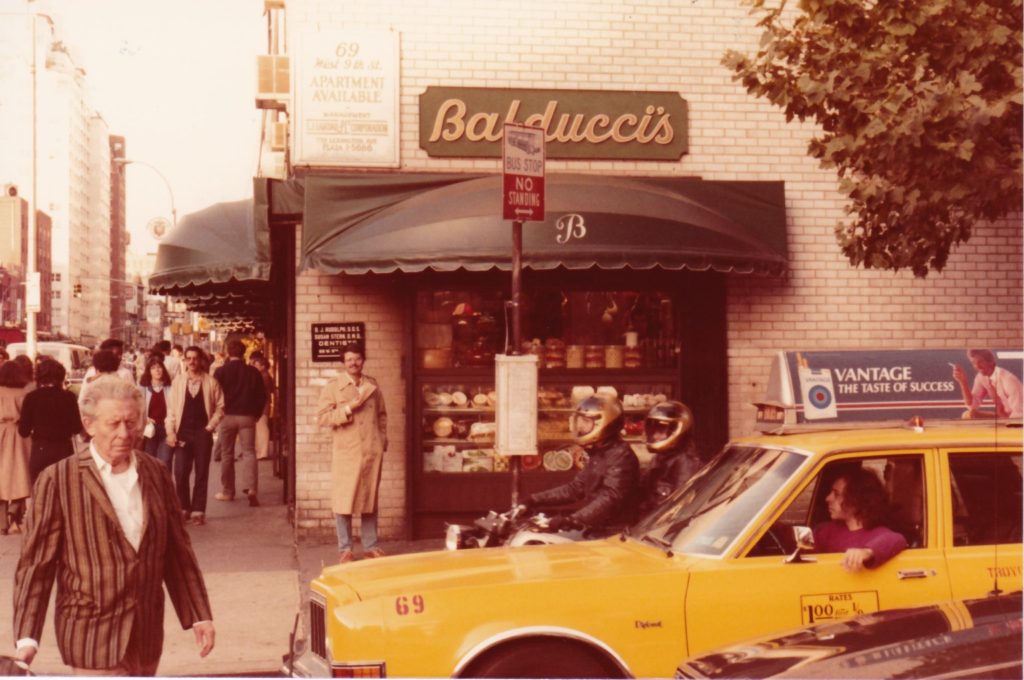 I believe this photo of my husband standing beside his car, which is parked between two posts, was a parting shot. The photo was taken around June 1985. I was pregnant and he left the brokerage firm to work in a bank where we could count on a consistent monthly income. 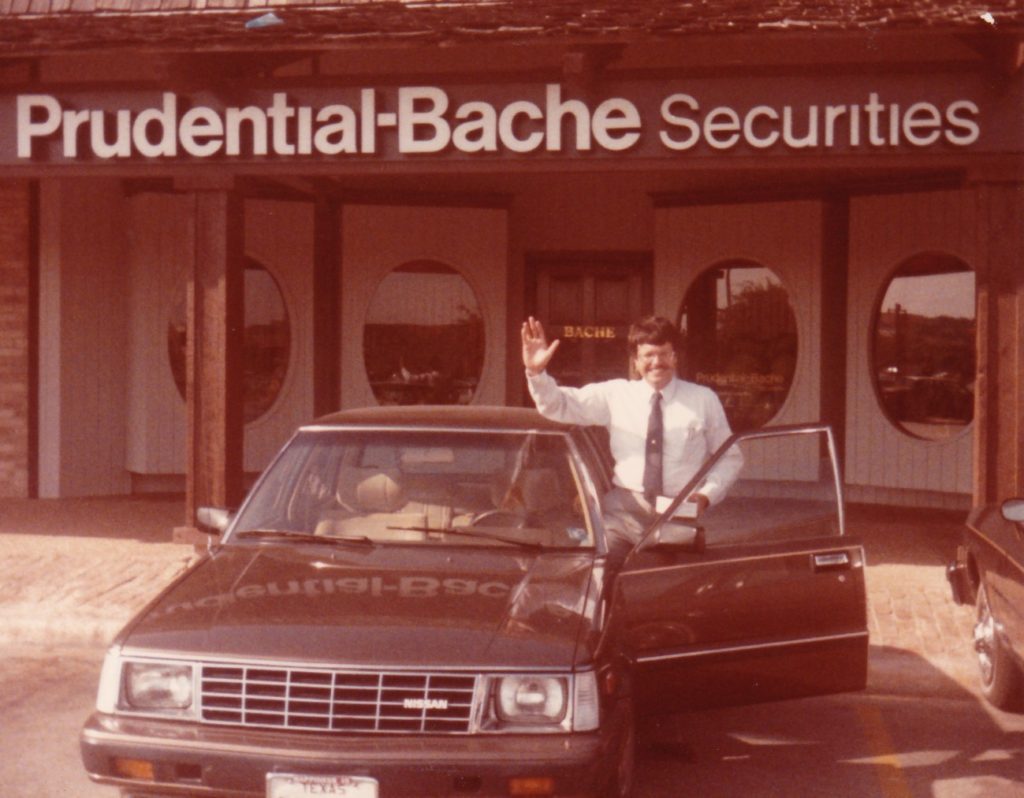 I think I’ll be back on track with an alphabet story that’s more “Austiny” next week. If all else fails, the letter M can be for Memory – and that works for almost anything!

P.S. – If you read my post that included Turk Pipkin, you might be interested to know that he collaborated with Willie Nelson on Willie’s new book Letters to America. Turk Pipkin is doing zoom events with booksellers this week to discuss the book.

No loitering! Head on over to Sepia Saturday to see what others have shared in response to the prompt photo.

8 thoughts on “Austin Stories B. C. – Loitering by a post for a photo”