My attempt to share stories for each letter of the alphabet featuring our life in Austin B.C. (Before Children) 1975-1985. The 70s were a long time ago. 26 stories might be a stretch for my brain, but I have made it to J – as has the Sepia Saturday prompt photo for this week.

Sometime in the early 1980s, I got antsy and took up jogging. I have never been athletic. I didn’t like to run. When I thought of running, I remembered being a kid doing lots of exercise at school because President Kennedy wanted us to be fit … and getting my first “stitch” while running laps. It was an unpleasant memory.

I think I started running because my biological clock was ticking – the ansty part – and because jogging was a trending form of exercise. One antsy day I laced up my sneakers, went out the front door, and started running down the sidewalk in our suburban neighborhood. I’m sure it was not a pretty sight. I could only run the length of two houses before getting winded.

By then, I had invested in proper running shoes and cushion inserts, owned a copy of The Runners’ Repair Manual (which I see falls open to stretching exercises), 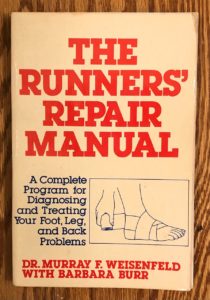 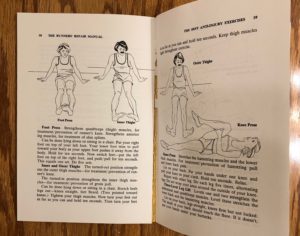 … and I usually ran the hike and bike trail that runs along Town Lake (now named Lady Bird Lake). I had also learned that the way to keep up my running was to take my jogging clothes to work with me and change before leaving the building. That way, I was dressed for a run when I got in the car. If I drove home first, it wasn’t going to happen despite my best intentions. Turn left! Turn left! Drive to the trail!

I would park by the tennis courts at Austin High School and cross under the MoPac overpass on a pedestrian bridge built to access the hike and bike trail. I began by running/walking on the south side of Town Lake, turning around at Lou Neff Point to complete my run. 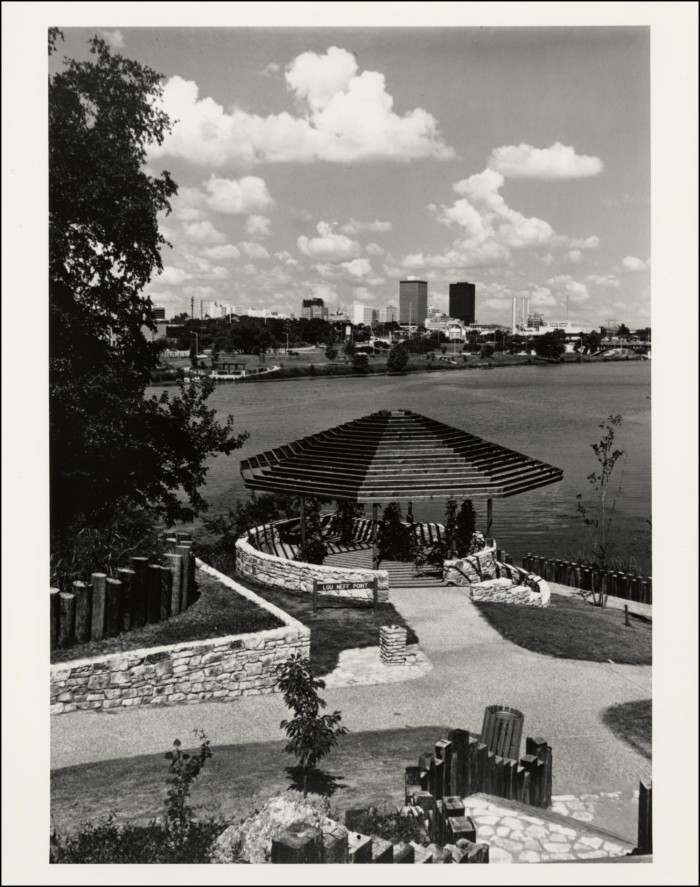 Eventually I increased my distance by running across the pedestrian bridge, 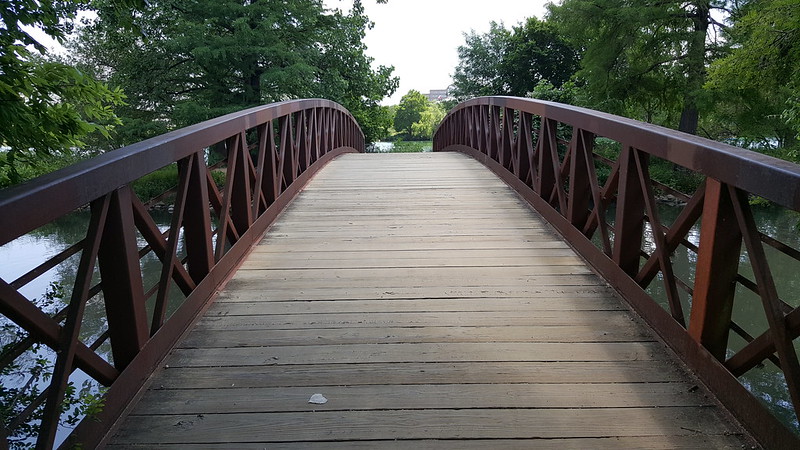 … back near the main part of the lake, and turned around somewhere along the path before reaching Lamar Blvd. 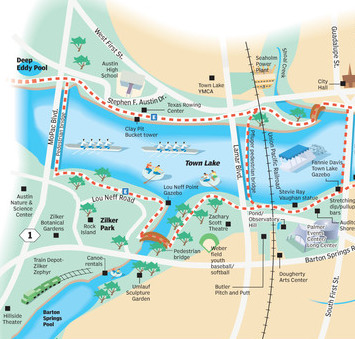 The tracks for the Zilker Zephyr crossed the trail, so it was necessary to watch out for the train and to wave at the kids and parents as they passed by. 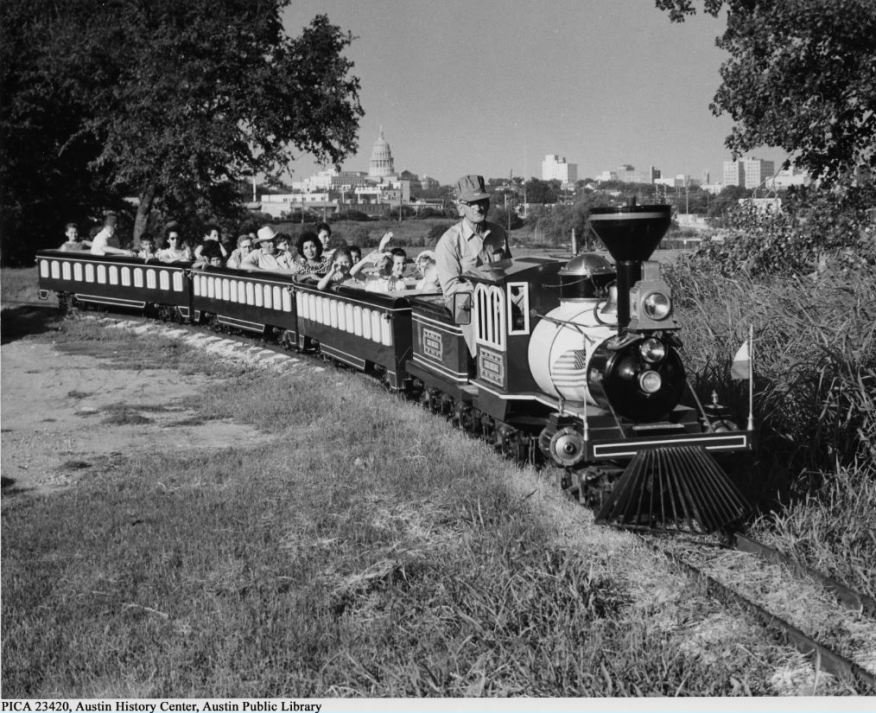 I sometimes ran into someone I knew (usually not literally) and we would wave as we passed each other, or run together if we were evenly matched. The pastor of the church I attended was also a jogger. I knew that because he sometimes mentioned it at church. One day I saw him running toward me on the trail and so I gave him a big smile and hello as we passed. I didn’t get a similarly friendly response. I realized he didn’t recognize me out of context and not in my church clothes. Sometime later, I saw him in the parking lot before or after a run and went over to him to say hi so he could place me the next time we ran into each other. We shared a little laugh about our previous encounter.

I learned to enjoy running. And working up a sweat – I earned every drop. I learned to stop and bend forward and recover from a stitch and keep going. I felt like a jock.

Once I had built up to a three mile run, I started setting my sights on participating in the Capitol 10,000. First, I ran in a 5k fun run. I don’t remember which one. I wish I still had the t-shirt to jog my memory. Once I had completed a 5k, I felt encouraged to try for the Capitol 10,000. I know I did it in 1983 because my husband dated the photos we have. (That t-shirt is also gone.)

The First Annual Capitol 10,000 was held March 12, 1978. 800 runners were expected, 3,400 registered. The course was on the Lady Bird Lake Hike & Bike Trail. Ben Sargent, Pulitzer Prize winning cartoonist, created the ’Dillo (armadillo) mascot. March 28, 1983 was the date of the sixth Annual 10K with 20,000 participants expected. The race had outgrown the hike and bike trail the first year and taken to the streets. It was expected to be the second largest 10k in the nation in 1983.

I registered and received my packet and t-shirt. 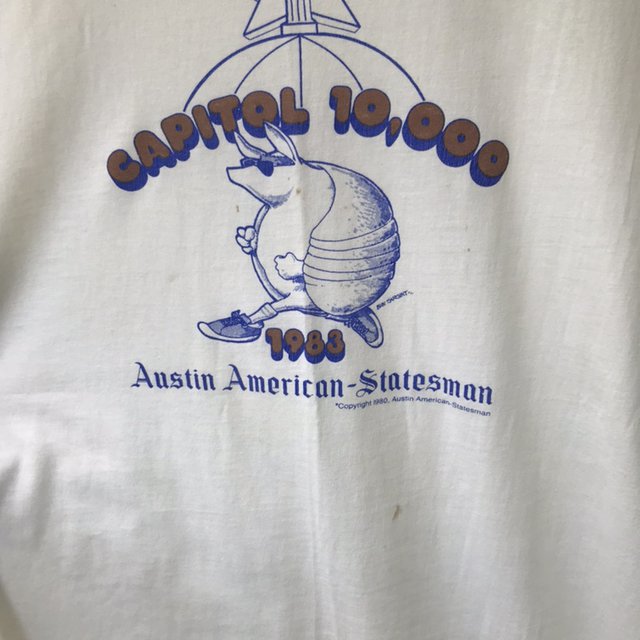 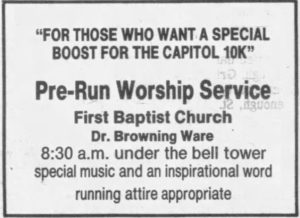 The Capitol 10,000 is sponsored by the Austin American Statesman newspaper, so there were lots of articles leading up to race day. Having never participated in a 10k before, I read all of them. There was advice on training, dressing for the weather, what to eat before the day of the race, the best places for spectators, advice to take a rest day before the race, as well as human interest stories about participants. There were numerous ads for shoes and athletic wear, a running calendar of training events and fun runs leading up to the 10k, recipes for runners, and notices of special worship services offered by downtown churches. Everyone was getting ready. 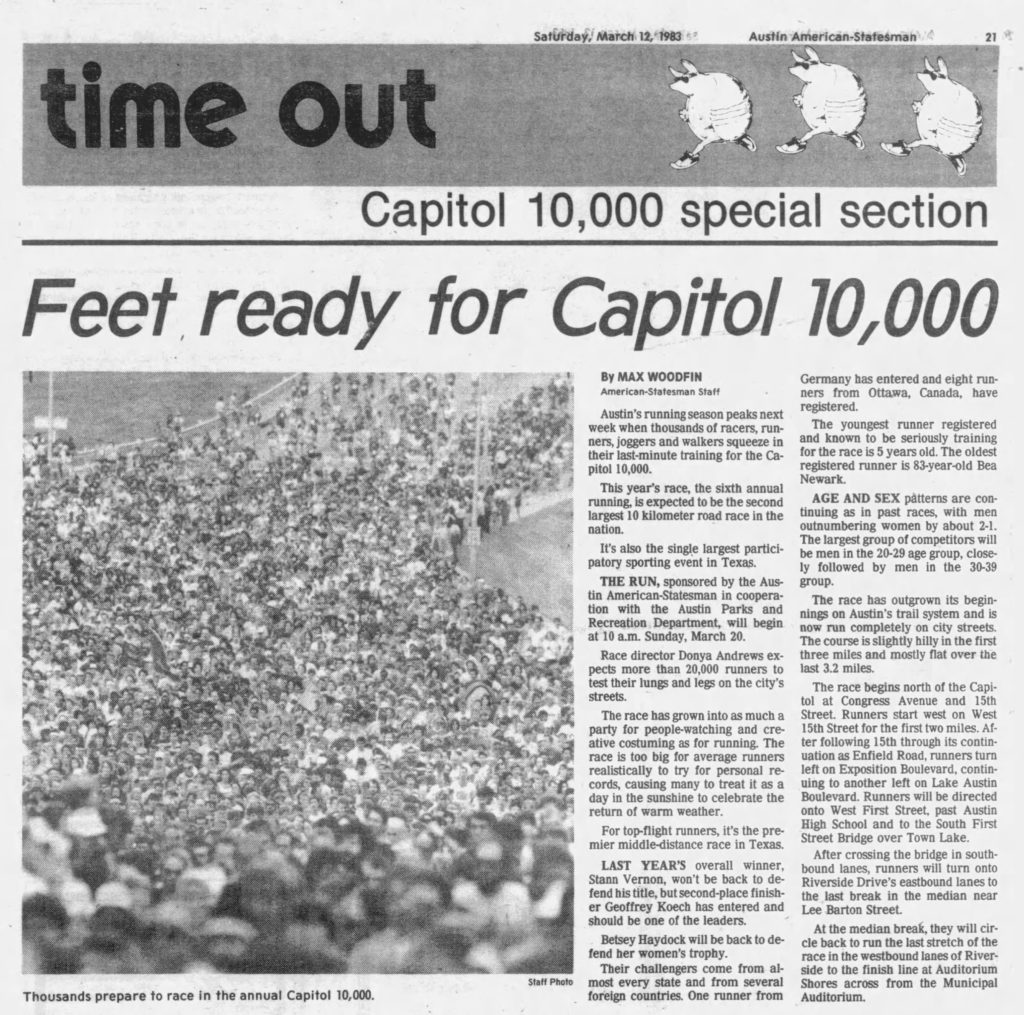 A map of the route provided information about the location of water and medical stations, just in case. 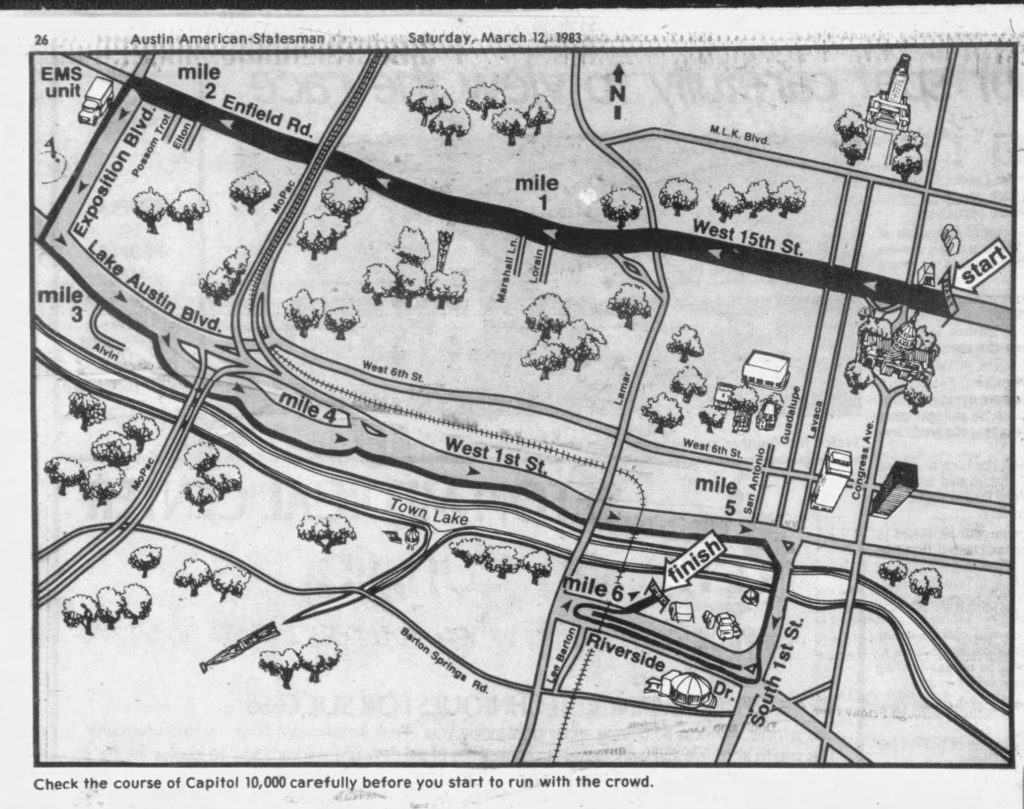 Here I am, just out of the car on that cold and windy March morning, race number in hand. 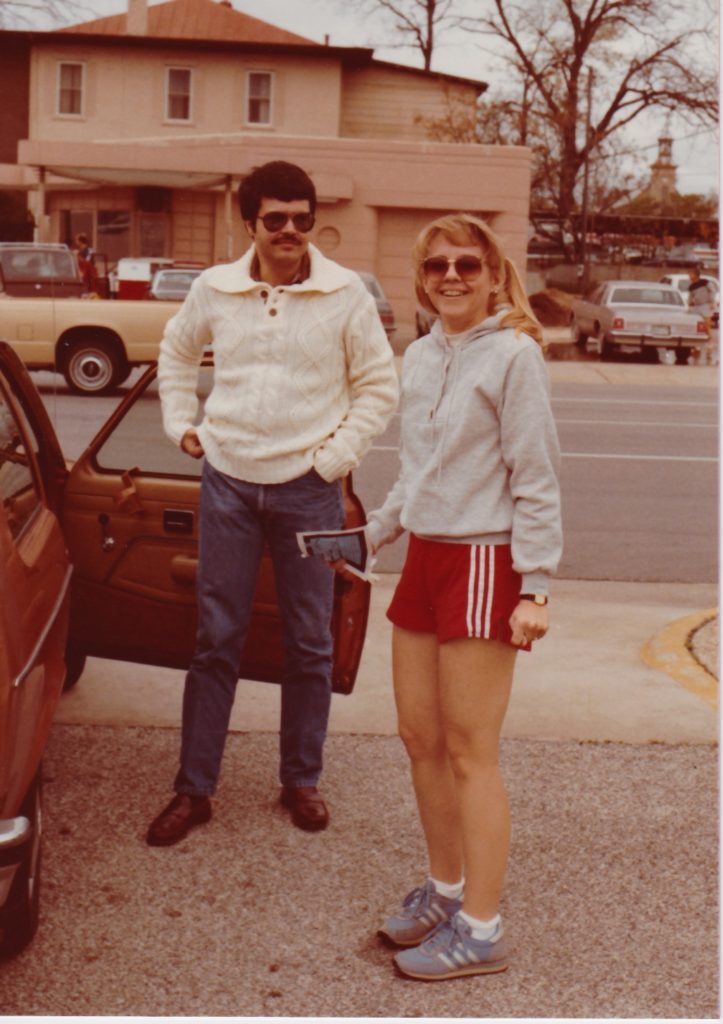 Elite and fast runners lined up at the front, behind wheelchair participants, who started before runners. Slow people like me were mostly at the back so we wouldn’t be in the way or trampled. It took a long time after the race started for runners toward the back to begin to inch forward. It must have been about ten minutes before I started. 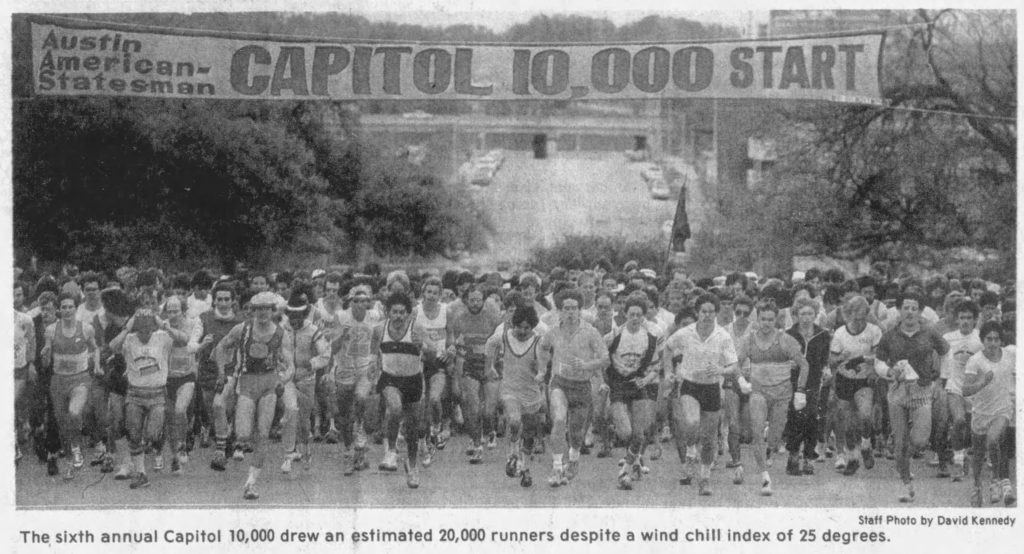 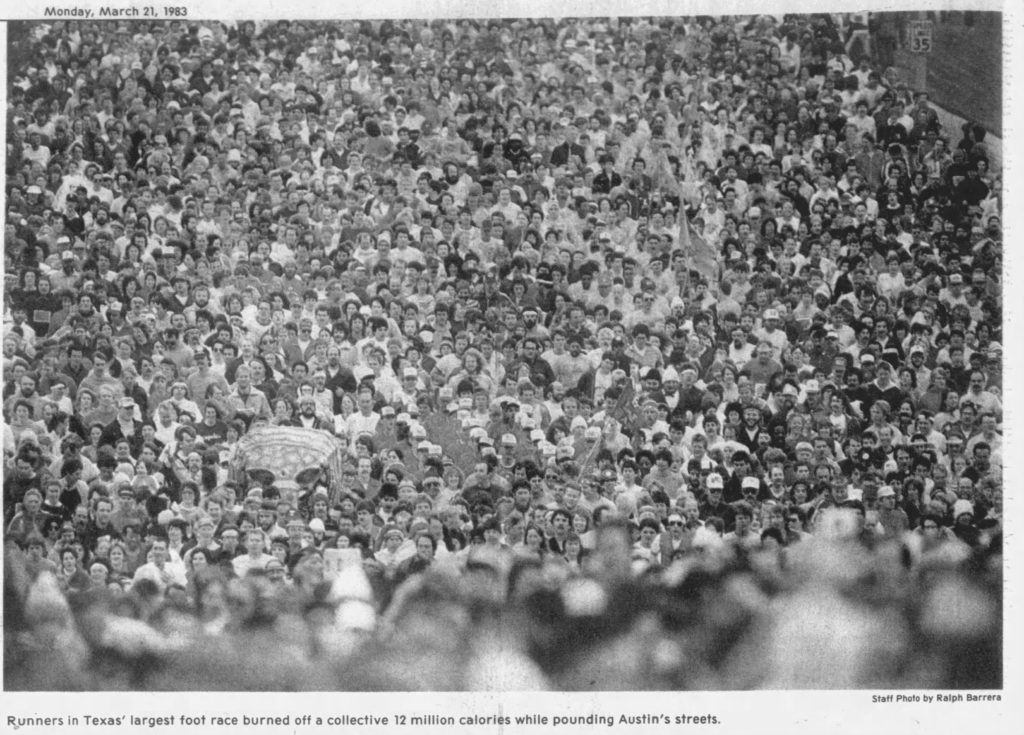 You might notice something odd below center left. I believe that is a jogging armadillo. Yes – here’s a photo with a better view. 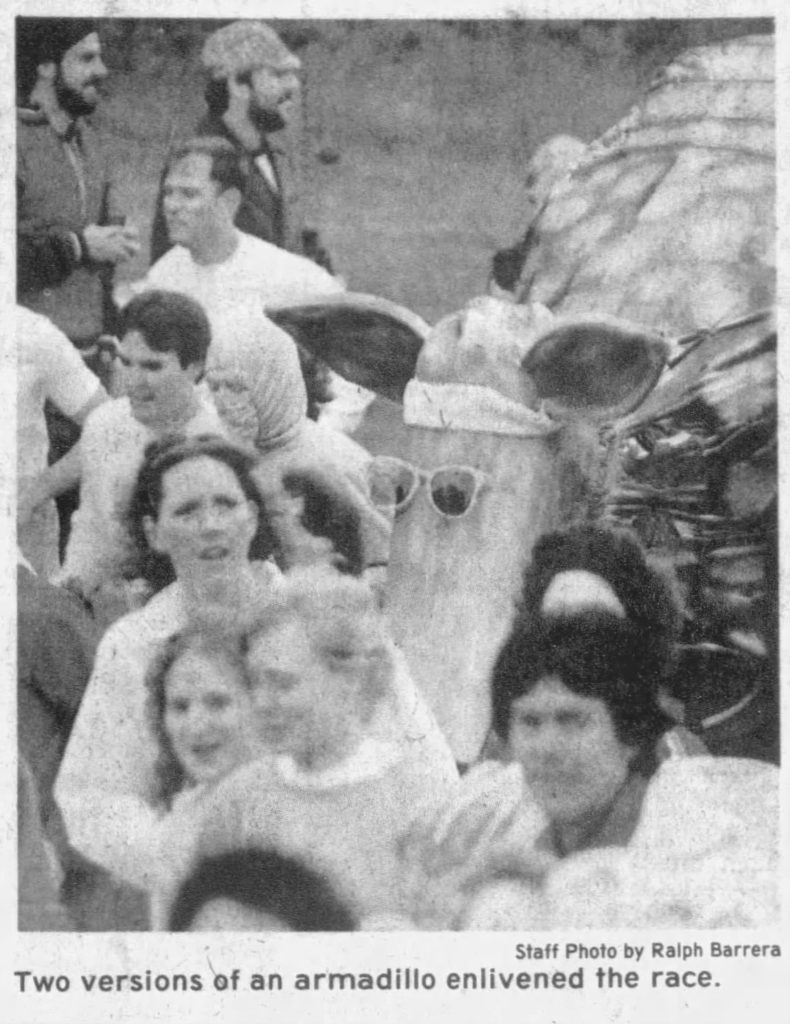 The first part of the race headed west and was mostly uphill. A challenge, but flowers were in bloom along the way, a lovely distraction as I ran upward. The crowd became less dense as the fast runners took off and the rest fell into their paces and places. My husband took a couple of photos as we came back east. 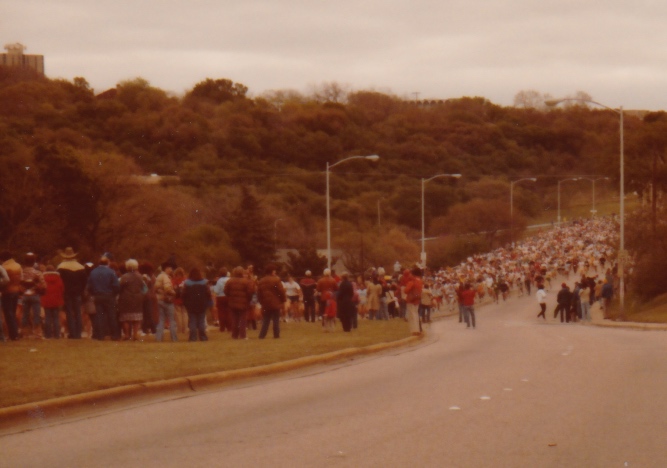 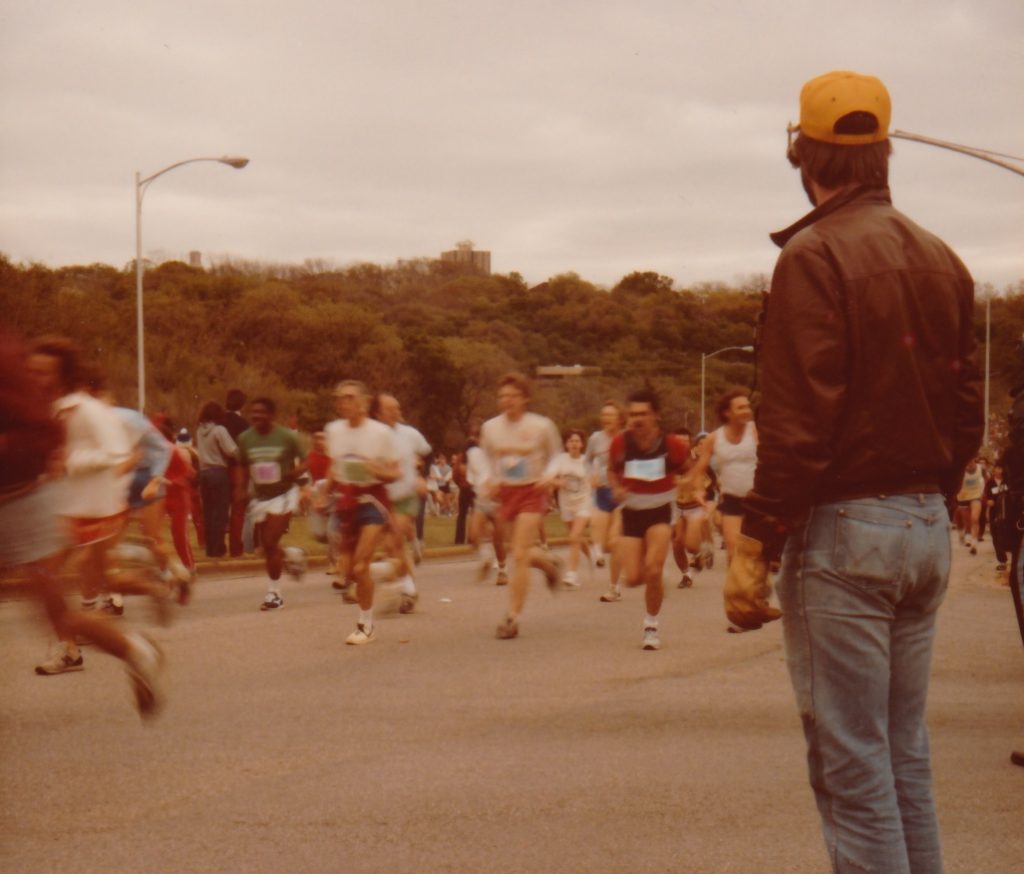 I think I ran about four miles before taking a walking break. Then I ran and walked my way to the finish line – running at the very end, of course. I don’t remember anything else. Somehow I found my husband, we got home and I rested.

A write-up the next day provided an overview of the event, including winners, costumes, injuries, and more. 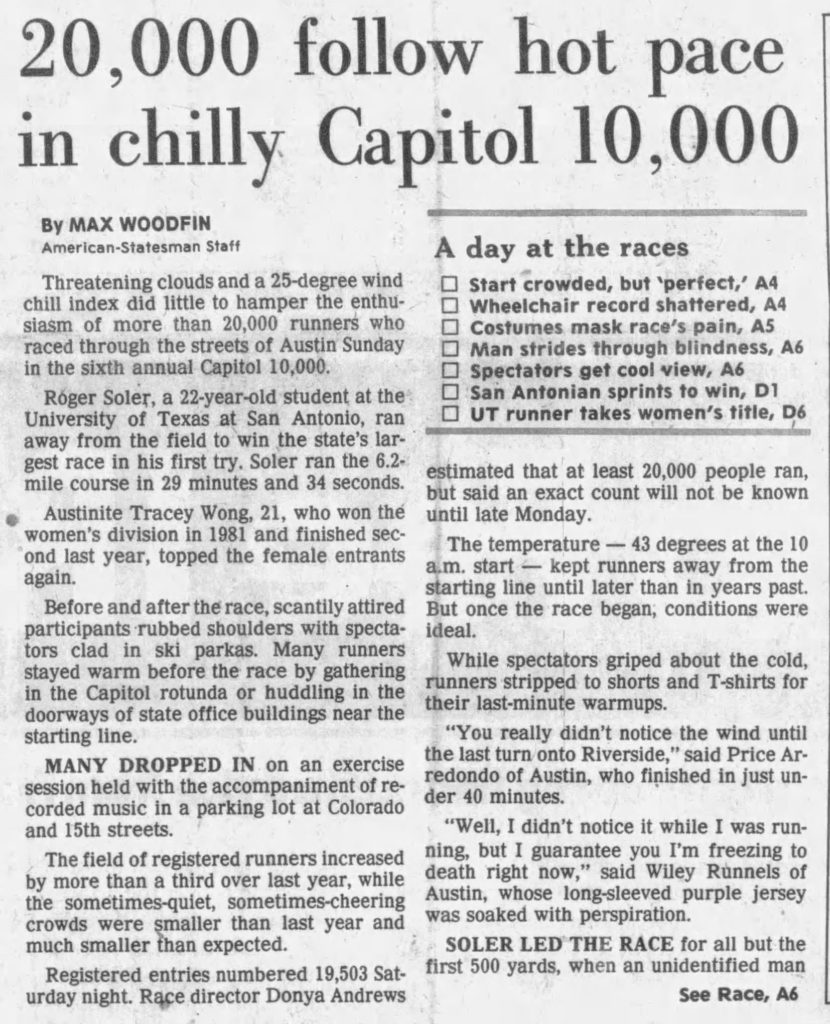 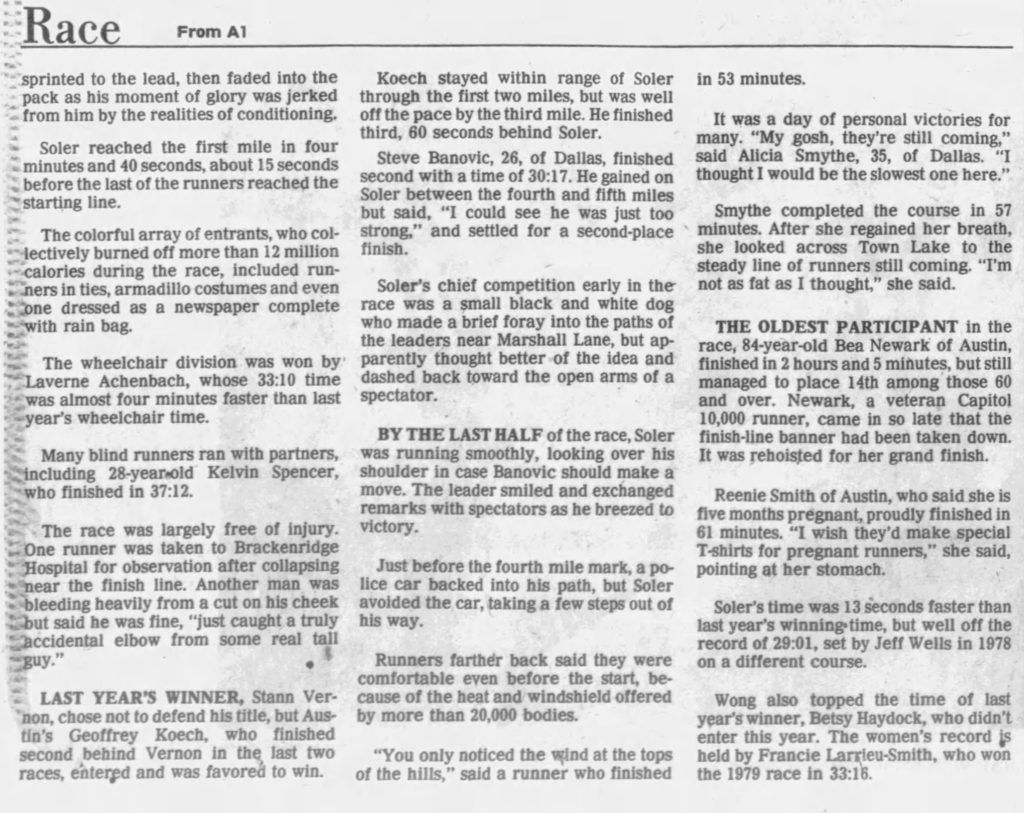 When I read the article above, I was surprised to find the name of someone from the neighborhood.

We used to live closer and I would see her out jogging every day. I guess she’s still at it because I saw her jogging just a few days ago. She has stamina!

In keeping with the Austin propensity for weirdness, an article about some of the costumed runners. 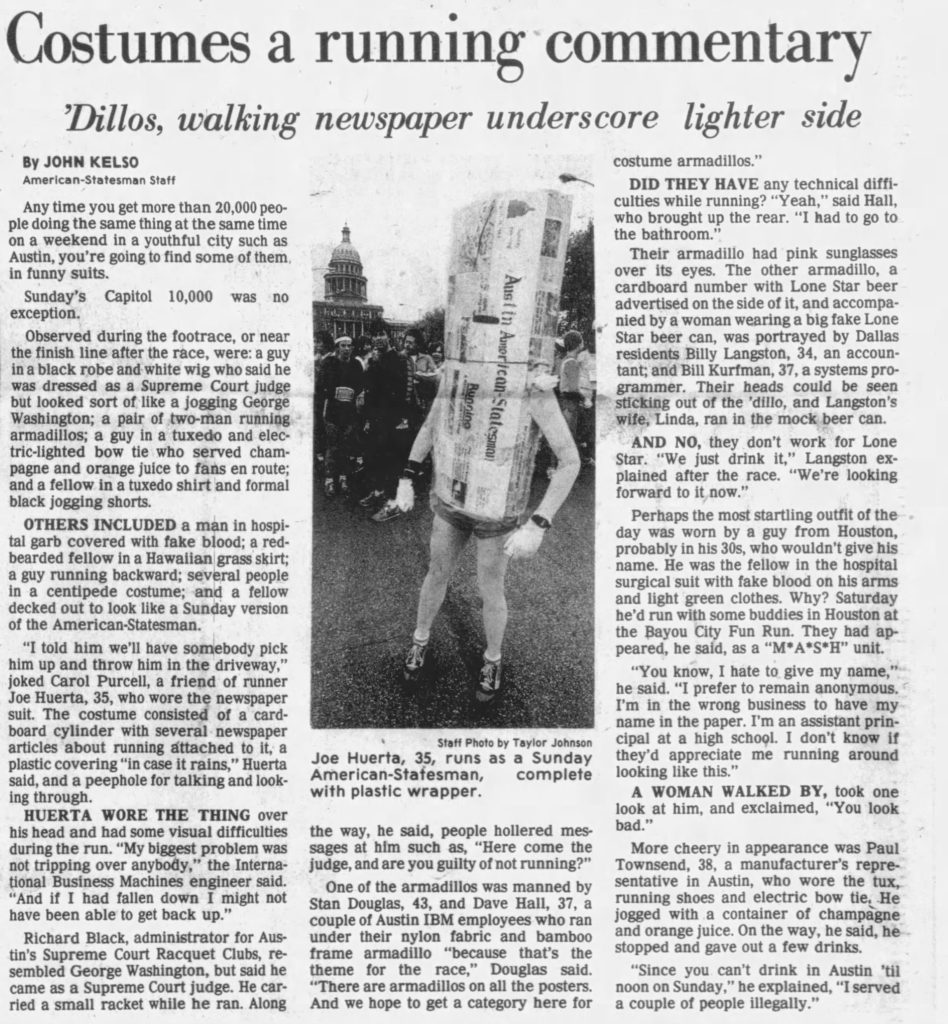 Although I have no photos or a t-shirt, I am sure I ran the Capitol 10,000 again the next year. The t-shirt had the same design, but was a pale lavender. Why do I remember that and nothing else? Except that I ran almost six miles before needing to walk. 1984 was my last Cap 10k. I had my first baby in 1985 and, unlike Reenie, I didn’t continue running.

In 1984, a couple got married fifteen minutes before the race and then ran off with the crowd. 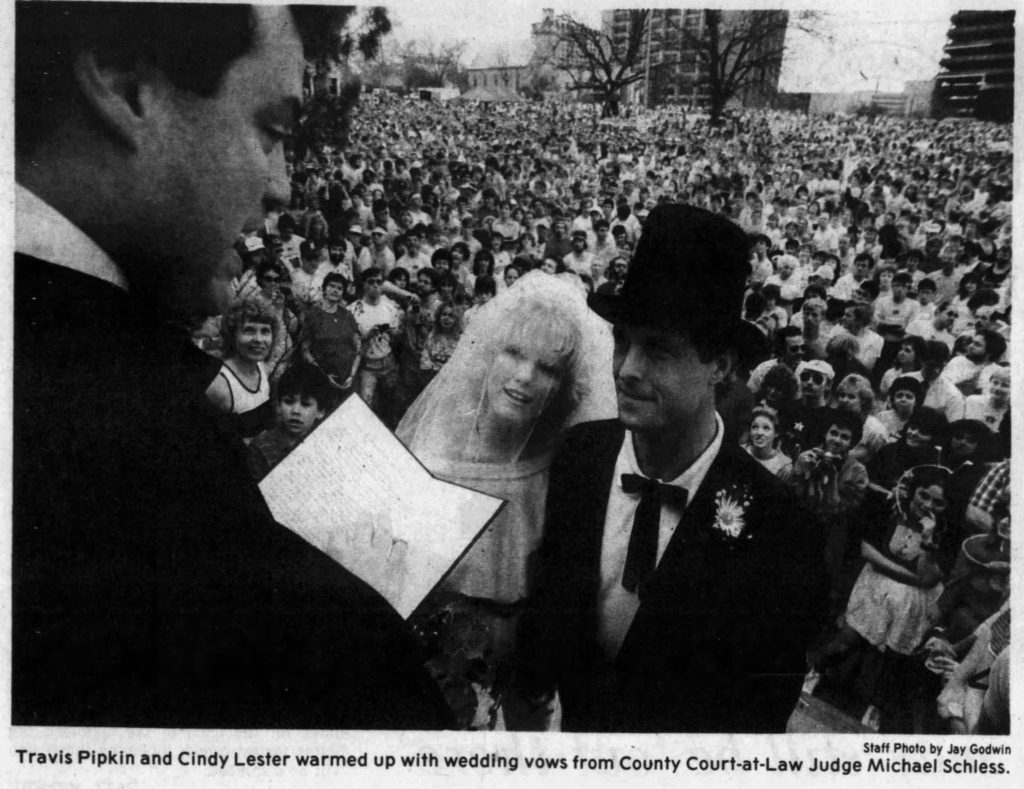 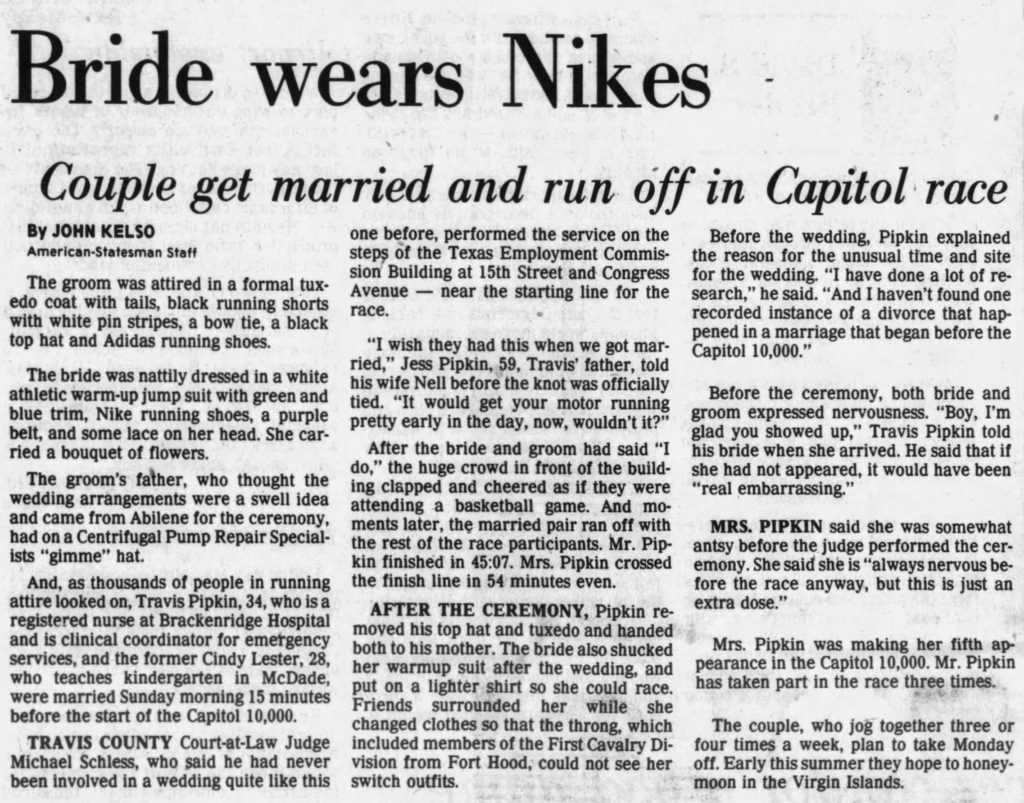 The bride and I met many years later, when she was a teacher at the school my children attended. And later, we became friends. She and her husband renewed their vows at the 1994 Capitol 10,000. 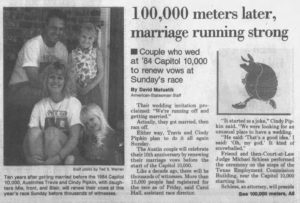 In looking back to write these memories from 1975-1985, I found a clipping I saved from 1982. I knew Bonnie. I worked where she lived. Perhaps Bonnie was the inspiration I needed to run in my first Capitol 10,000 the following year. 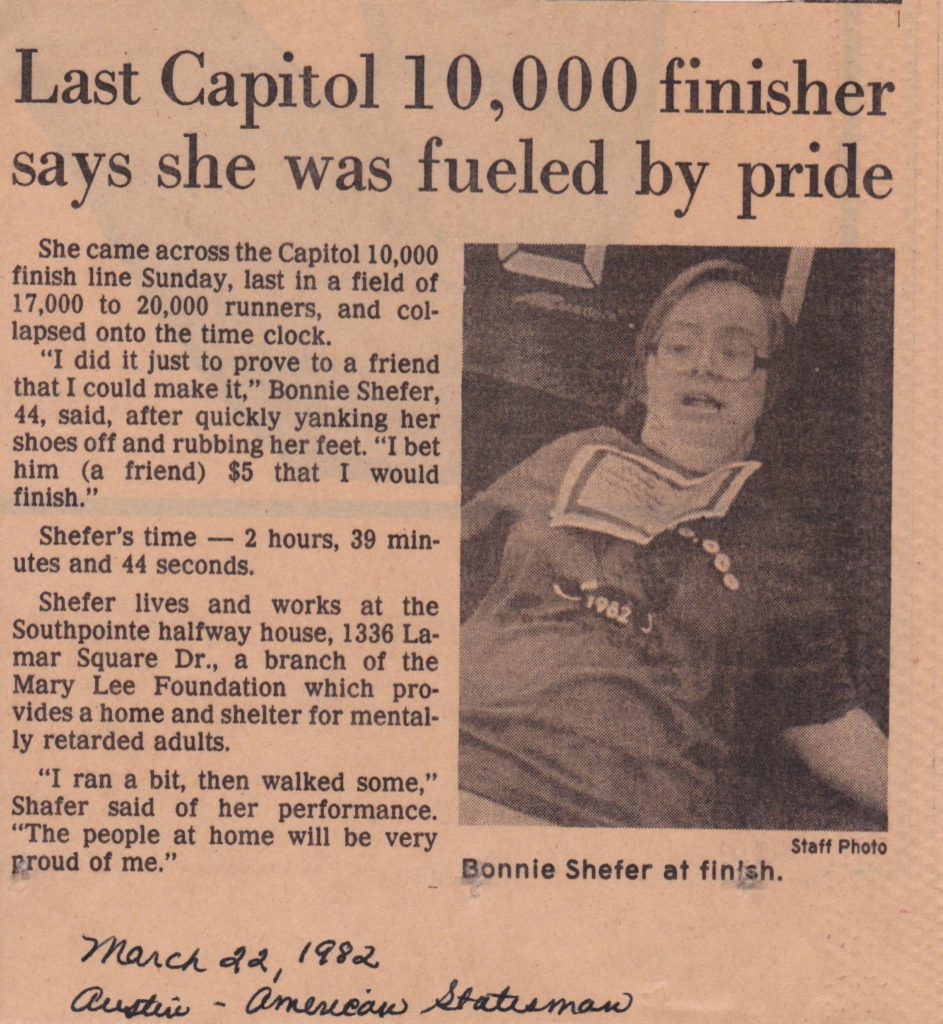 This is my contribution to Sepia Saturday (although it is now Monday). Please visit other participants, who have surely prepared something more closely related to this wonderful prompt photo. 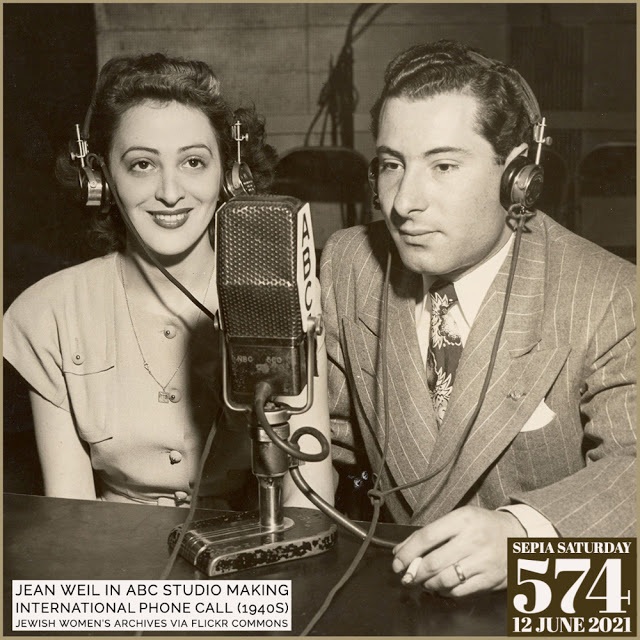