My attempt to share stories for each letter of the alphabet featuring our life in Austin B.C. (Before Children) 1975-1985. The 70s were a long time ago. 26 stories might be a stretch for my brain, but I have made it to I – as has the Sepia Saturday prompt photo for this week 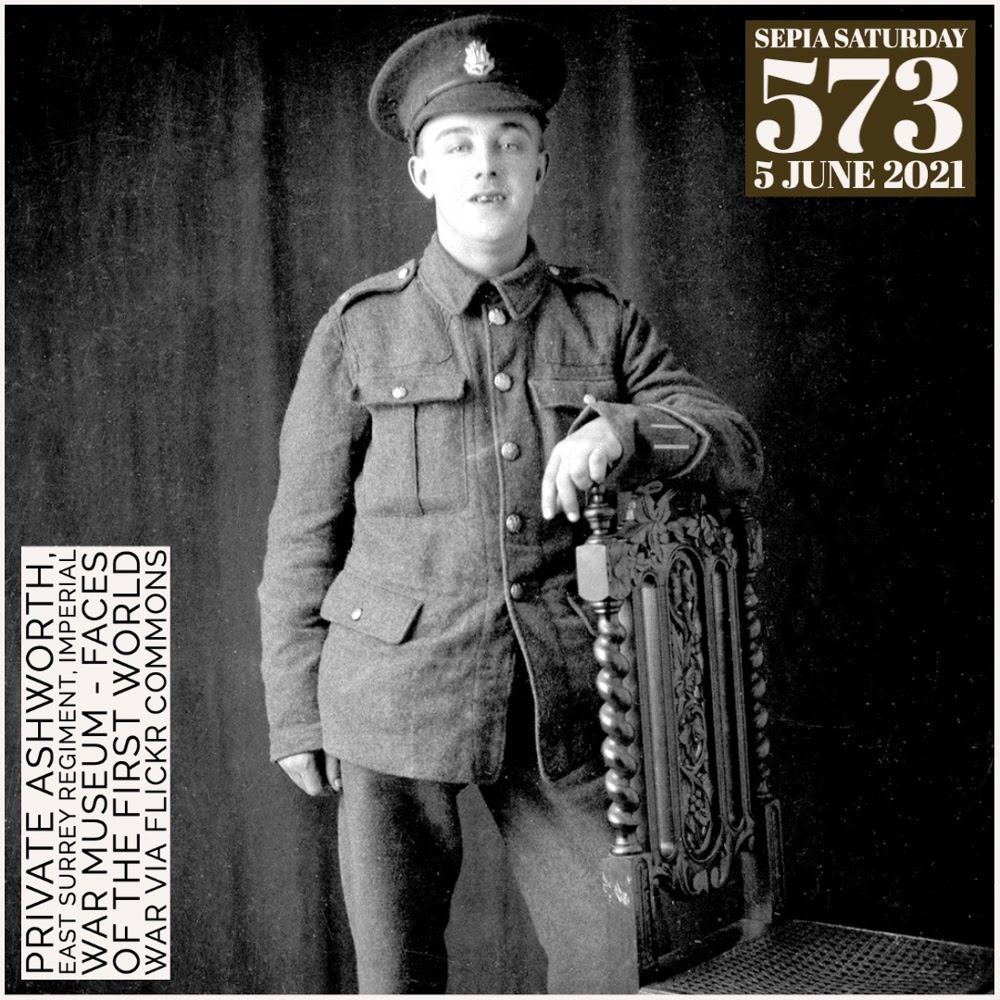 In a previous post, I mentioned that I worked for a state senator one summer. “That would be interesting,” you might think, but you would be wrong. The Texas Legislature meets every other year, January – May, unless there is a special session. There was not. It was The Interim. The time between.

I got the job because my father-in-law knew the senator. I don’t know what transpired between them. Were they having lunch and my FIL mentioned his son living in Austin, whose wife needed a job during the summer and the senator said, “Well, I need a warm body in the office”? Did my FIL pick up the phone and ask a favor of the senator? Was my FIL in the room with the senator when he mentioned that he needed to hire someone for the summer and my FIL suggested me because we were poor young things? That story has gone to the grave with both men. All I know is that I was told to apply for the job; I did; and I was hired. I probably only saw the senator in person a couple of times as he worked out of his Houston office during the interim.

It was the summer of 1976, before I was to begin grad school in the fall. I worked with the senator’s administrative assistant in his office in the state capitol building. Even she didn’t have a lot to do, it seemed to me. Someone needed to be in the office to answer the phone and receive anyone who walked in. Sometimes there were mailers to fold, stuff, stamp, and mail. I occasionally delivered something to another office. Very rarely, someone actually came through the office doors.There were no computers or cell phones, so we were left to our own devices when there was no work to do. Sometimes I read. I even practiced my typing. I may have only worked part time, but my memory fails. And because my memory is more impression than details, there may have been more going on than I remember.

One day the administrative assistant was using the conference table in the back room to make Christmas crafts. I was all about that, so I bought the necessary materials and she provided me with patterns and we did some crafting in the down times. (Maybe we did this during lunch – that doesn’t sound so bad and is probably true.) I made several of each – for my husband and me, our parents, and a grandmother or two. One of the things we made were these Noel hanging things (what do you call this? a banner?) made from burlap upholstery webbing, felt, yarn, and a pop top. I happen to have one sitting on my dining room table with piles of family history stuff. It is one of the gifted ones I got back after a death. 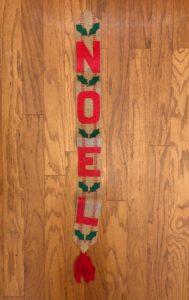 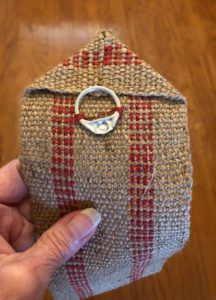 We also made some goofy Santa’s out of toilet paper rolls, felt, and cotton. It was on the top of a Christmas tree in a photo I shared in a previous post. Santa fits perfectly in a Pringles can for storage. I still have mine and usually set him out just for the kitsch factor. He deserves a better photo, but I’m too lazy to dig out the Christmas decorations just for this post. He has extra long, thin arms and legs. Really an odd fellow. 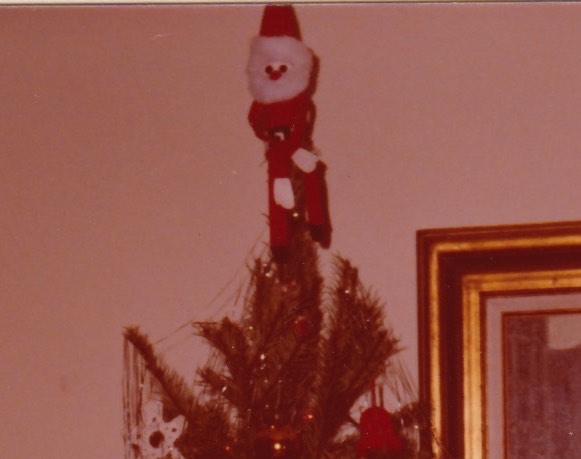 A friend and I went to the Capitol to register our opposition to some very bad bills being considered during a special legislative session in July 2017, forty years after my short tenure there. My friend had also worked for a state senator in her younger days, so we decided to walk around the building for old times’ sake. It is really a beautiful building. I wish I had taken more photos of the inside the day we were there. On the lowest level of the Capitol there are photographs of the senators and representatives from each session. I located the appropriate session and the senator I worked for, Texas State Senator Lindon Williams, from Houston. His photo is right above my hand. 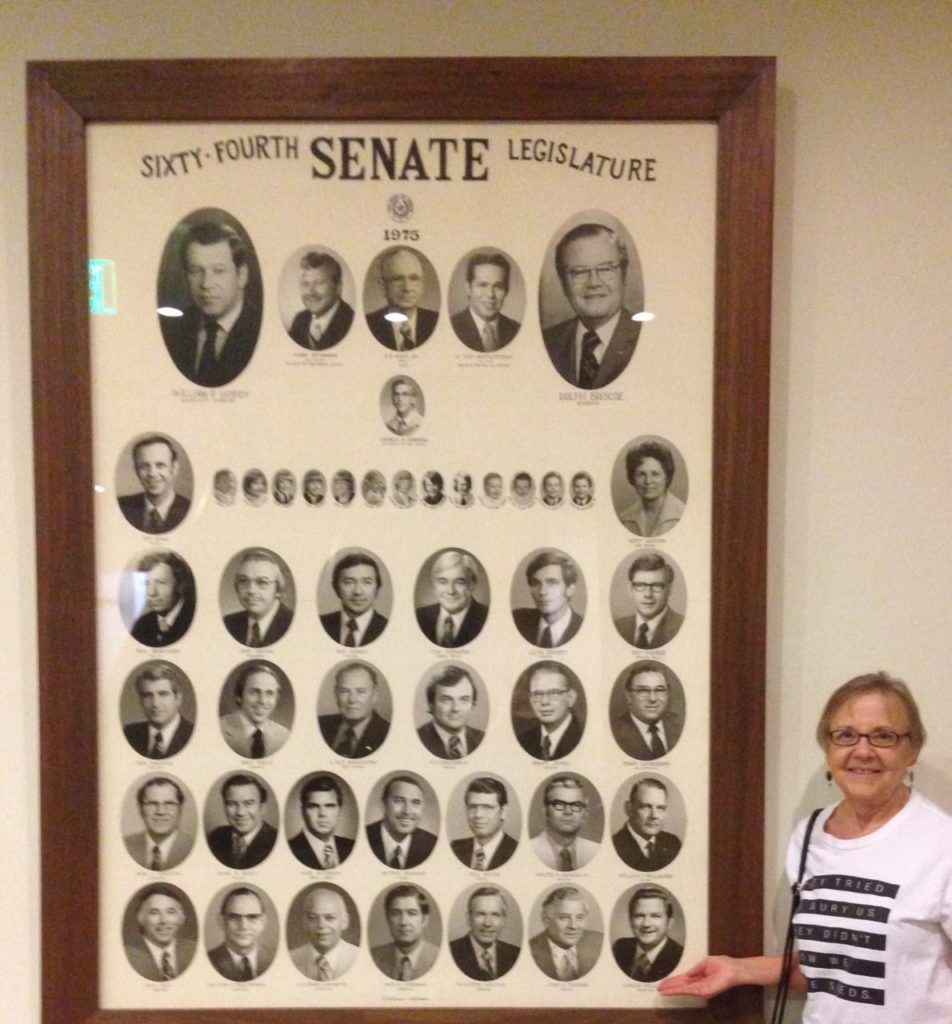 My friend, pictured with her former employer. 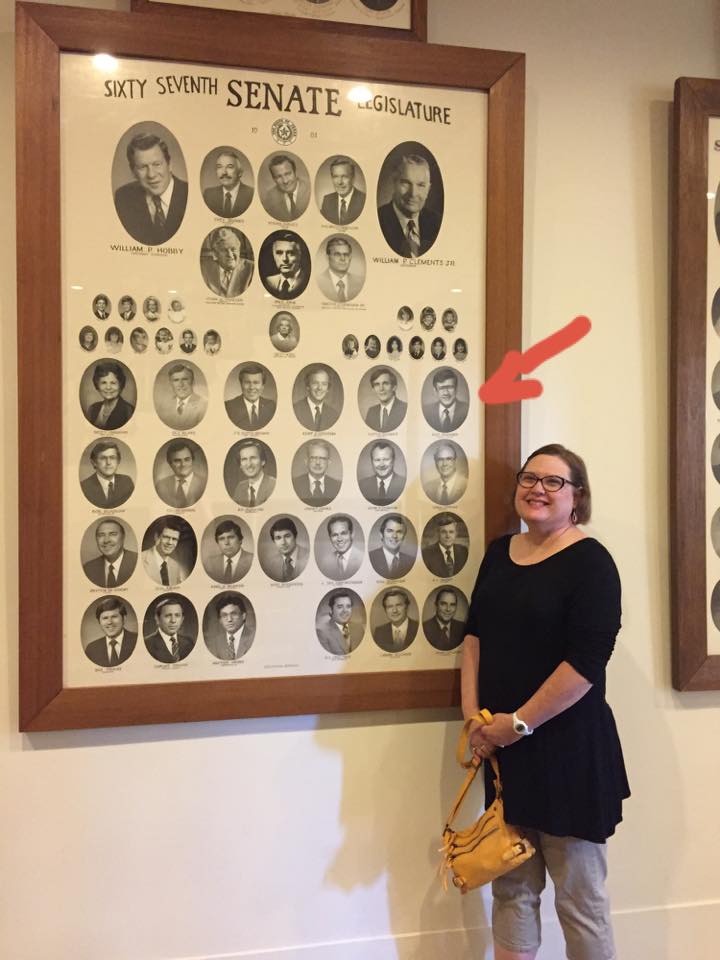 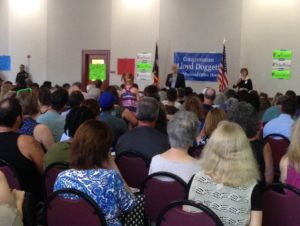 I am standing by the sixty-fourth class, my friend is standing by the sixty-seventh class. In both classes, and those in between and some later, is State Senator Lloyd Doggett – just to the left of that red arrow. He is currently a member of the U.S. House of Representatives. Just five days before my friend and I made this tour of the capitol, Rep. Doggett held a town hall meeting in the Family Life Center of the church we attend. I was volunteering as a member of the church that day, guiding people upstairs and to the bathrooms. Rep. Doggett and his family used to be members of this church and usually sat in the north balcony. Coincidentally, I have another friend, also a member of FUMC, who used to work for Mr. Doggett when he was a state senator.

While my friend and I were in the building, I also stopped for a photo op with former Gov. Ann Richards and asked her to haunt the halls during that special session. Texas needed her help then and certainly needs it now. C’mon, Ann! 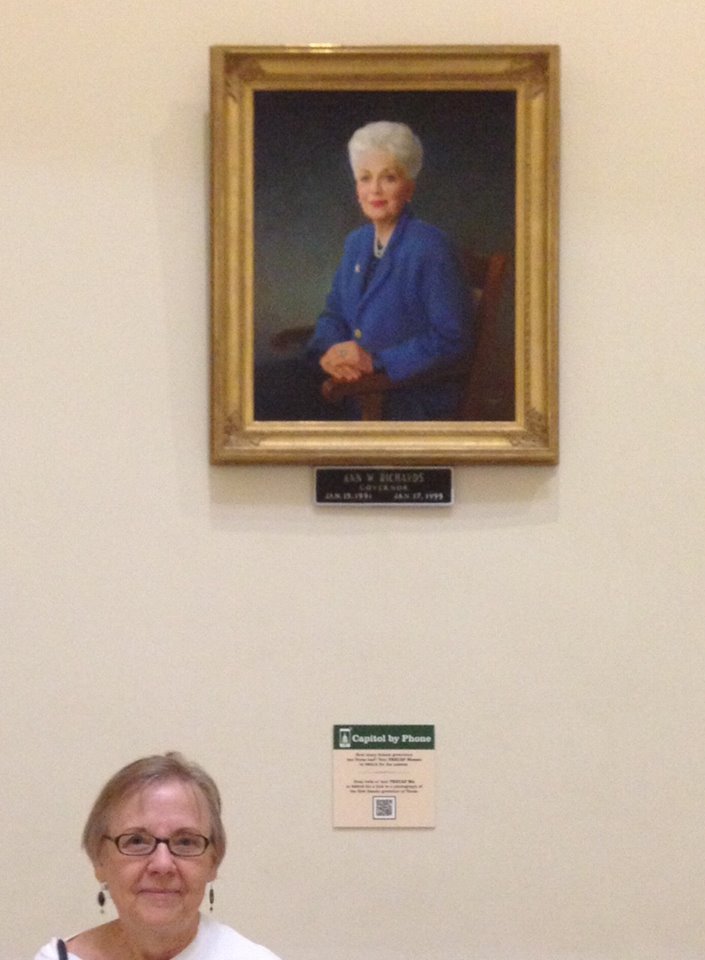 And wouldn’t you know, Ann Richards also used to attend FUMC. She usually sat downstairs center section. And former U.S. Congressman J. J. (Jake) Pickle – farther back in the center section. I didn’t know any of these politicians, but I knew where they sat.

Our visit that day was in July in Texas and it was hot hot hot, but we wanted to explore the newest installations on the capitol grounds, so we sweated it out. I was impressed by the Texas African American History Memorial. 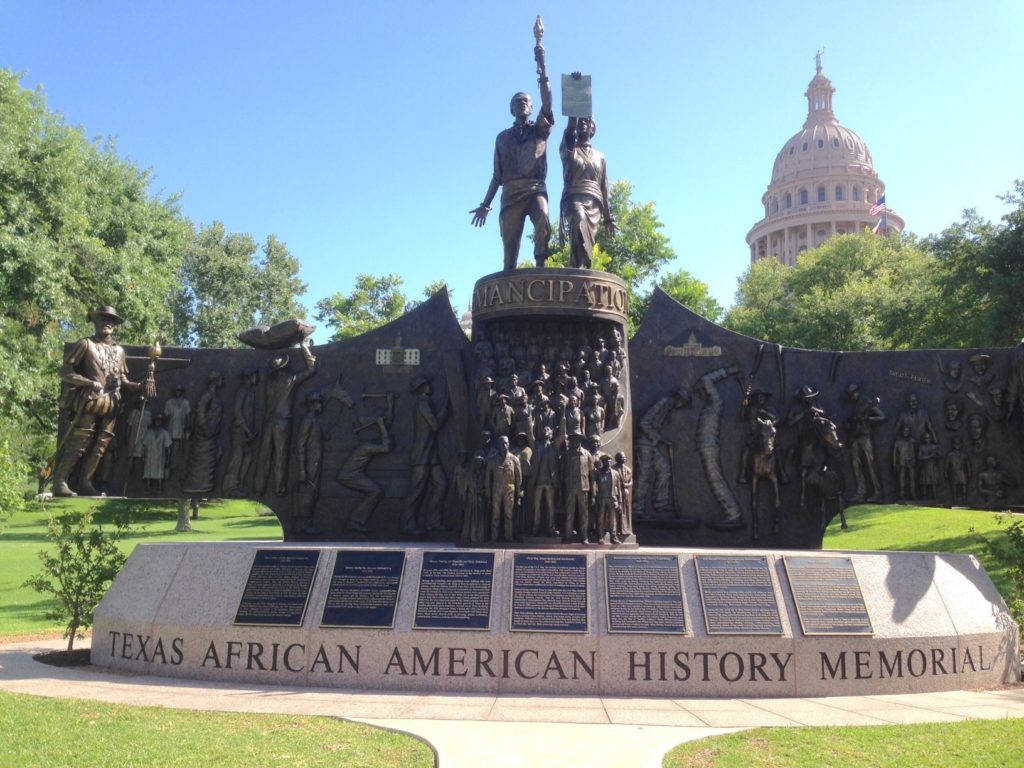 Close up of the emancipation section. 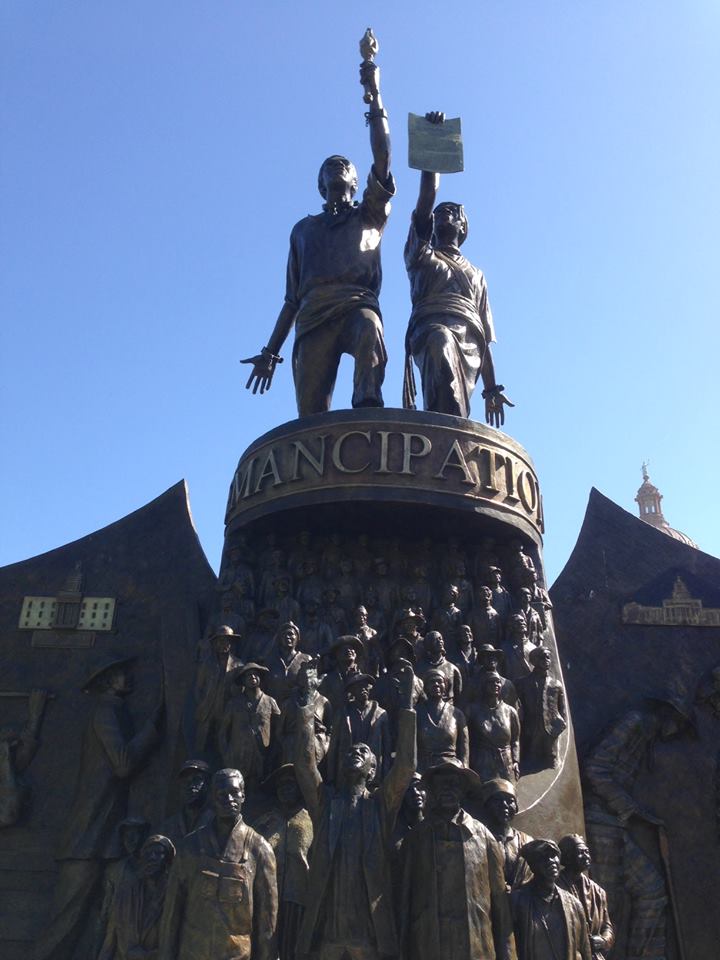 The Texano Monument. Texas has such a rich cultural history. 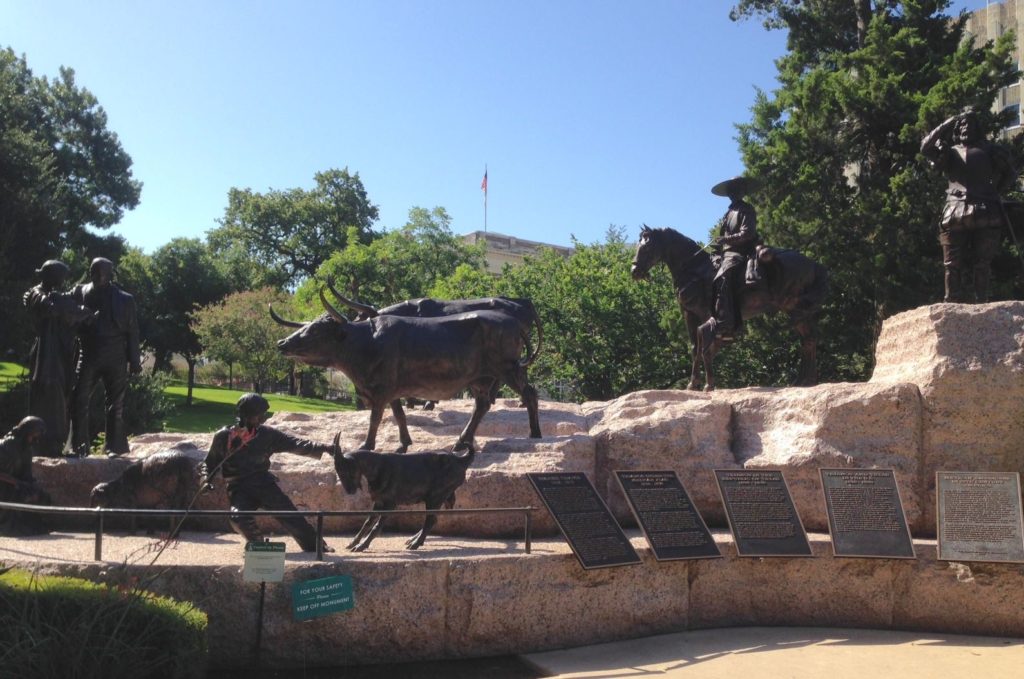 My husband took, developed, and printed these photos of another statue on the Capitol grounds in May 1980. 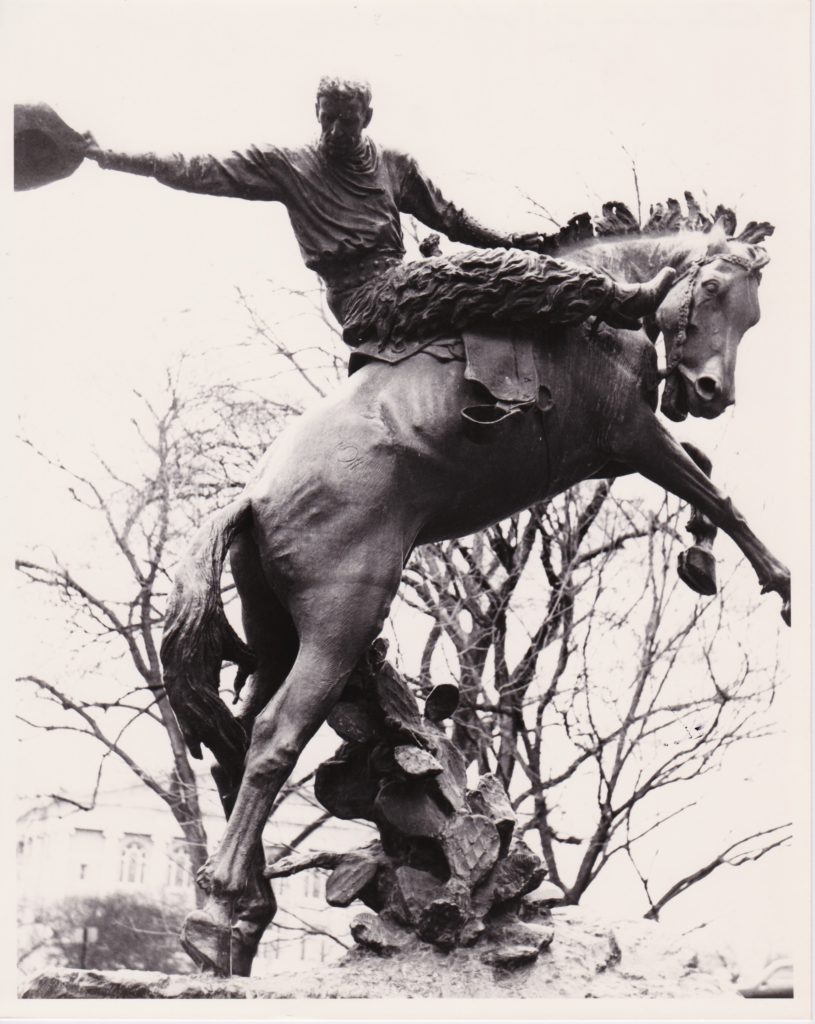 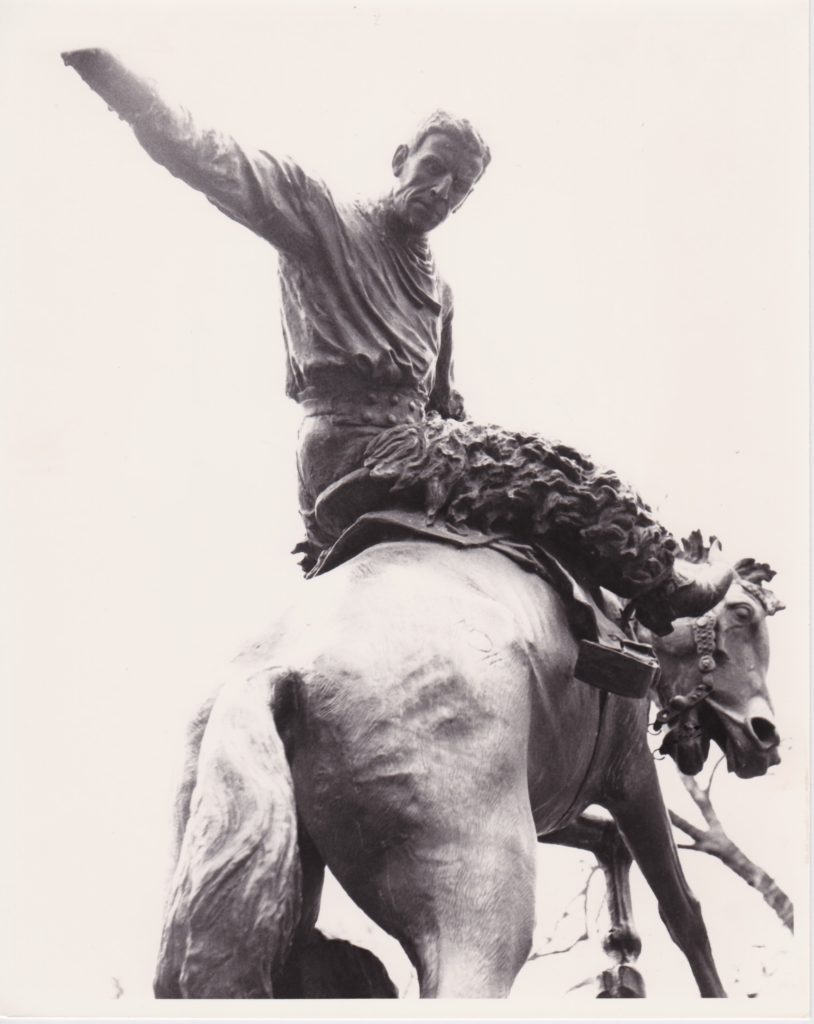 Shortly before midnight, May 31, 2021, Texas Democrats walked out of the Texas House Chamber, denying a quorum to vote on a bill that aimed to suppress the vote. Their actions brought to mind the legislative session of 1979, when a group of Democratic senators, known as the “Killer Bees” went into hiding for five days. The issue at hand was also elections. 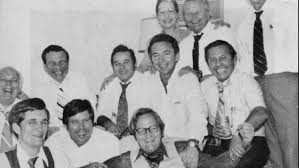 That’s Lloyd Doggett bottom left. He earned a place on the Texas Monthly Magazine best legislators list in 1979. I’m sure he made the list more than once, but they had this to say about him in 1979:

Lloyd Doggett, 32, liberal Democrat, Austin. Leader of the Senate brigade whose determined efforts to sandbag a flood of anticonsumer bills led a disgruntled Bill Hobby to refer to them as the Killer Bees. As a tactician, rivaled Clausewitz. Knew he’d be fighting a defensive battle, so made his opponents struggle for every inch of ground he gave up. His main weapons: filibusters, threats of filibusters, and—in desperation—fleeing the battleground. A selection from Doggett’s primer on legislative warfare:

Principle: the House, with 150 members, is less susceptible to lobby saturation than the Senate, with 31 members. Strategy: use the press to make bills you oppose unpalatable to fair-minded House members. Execution: mount a well-publicized filibuster against a bill weakening the Consumer Protection Act, referring to the proposal as the Consumer Destruction Act. Result: the House sponsor admits the bill needs improvement and includes amendments Doggett could never have passed in the Senate.

Understood perfectly the rhythm of the 140-day session—too relaxed in the beginning and too frantic in the end—and turned it to his advantage. His white tennis shoes became the most celebrated symbol of the session; their presence on his desk warned of his readiness to stand on his feet filibustering for hours. Early in the session the mere sight of them was enough to persuade restless senators to adjourn rather than sit through the night. Later, when a filibuster would mean certain death for the noncontroversial bills stacked up waiting for the Senate runway to clear, Doggett could win in the negotiating room what he had lost on the floor: for example, his last-night threat to talk to death the State Bar’s Sunset bill forced bar lobbyists to accept additional nonlawyers on their board of directors.

Superb at using the power of reviewing gubernatorial appointees: paved the way for the first Senate rejection of a Clements nominee by forcing potential judge Monk Edwards to admit he assumed there was money in an envelope he delivered to then Governor Preston Smith on behalf of Gulf Oil. Rid the state of nefarious bureaucrat Hugh Yantis by invoking senatorial courtesy.

Not a member of the Senate club—oldtimers occasionally slight him by not holding hearings on his bills—and succeeds mainly through hard work and attention to detail; never parties, never relaxes with lobbyists, reads during every spare moment—even in committee meetings. A Texas politician of the modern mold—a pure technician, earnest, a bit dour, like an aging choirboy. Works seven days a week and expects his staff to do the same; once went to his Capitol office on Christmas afternoon and was infuriated to find the building locked.

He exemplifies why I am not in favor of term limits, in case you were wondering.

First Methodist is located on the west side of the Capitol and during our early years in Austin, there were a number of politicians who were members. Pastors were asked to say opening prayers at the legislature. These two buildings and the people within seemed more interconnected than they do today. I can’t think of any politicians among the membership now, but the church buildings and the people within remain connected with that political building and body within it. I think being in one another’s shadow inevitably makes it so. As a member of the church, it is great to have access to the church parking lot and walk across the street to join a rally or a march, or to register my support or disapproval of a bill being heard in committee as my friend and I did that hot day in July.

The governor has called for two special sessions this year. Yes, two. No boring interim for staffers this summer. Unless, of course, the governor makes good on his threat to veto the section of the budget that funds the legislature… Would that mean there will be no staff and therefore no one to make all the things happen??? Sheesh!

March on over to Sepia Saturday to see what others have prepared. They are an creative bunch!

7 thoughts on “Austin Stories B. C. – The Interim”