I’ve been deconstructing a photograph taken at the wedding of George and Bella Elgey (1920 in Durham, England) and trying to identify the people in the picture using pictures of the “English relatives” in my grandmother’s collection. If you’d like to catch up, I’ve listed the links to previous posts at the bottom.

Identifying the first few individuals was pretty easy, but I ran into trouble as I continued. A letter from “Aunt Jennie” to my grandmother, Eveline Coates, provided information about several people whom I assumed were Jennie’s children.

I knew that my grandmother’s father was Joseph Coates and found him in the 1881 Census for England and Wales. There is a son, Joseph (age 13), and a daughter, Jane Ann (age 3), with their parents John and Ellen Coates in Willington, Durham, England.

I’m a little slow, but it finally dawned on me – Jennie must be a nickname for Jane Ann.

I found Jane A. Elgey in the 1901 Census in Hetton-le-Hole, Durham, England married to Frederick Elgey with children Jane P., John, Ethel, George and Elizabeth. All of those names were in Aunt Jennie’s letter except Jane P.

It seemed that I had the family group identified, so I returned to the wedding photograph. I had not yet identified Lizzie, the youngest child in the 1901 census, so I looked at the girls seated in front. Lizzie would have been about 20 years old at the time of the wedding. If those girls in the front are 20 maybe I should be calling them young women.

The picture below has this signature on the back:
With Fondest Love
from Lizzie 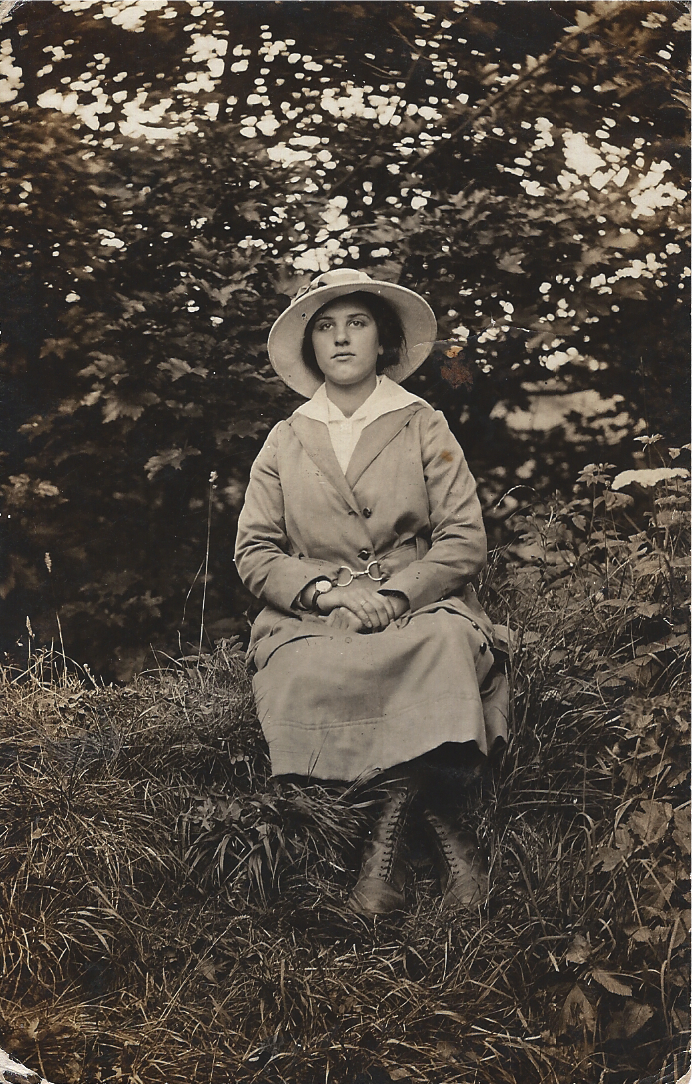 My mother’s handwriting also appears there, with this inscription: Mrs. Jack Hall.

At first glance, I thought Lizzie looked like the girl on the right in the wedding picture. 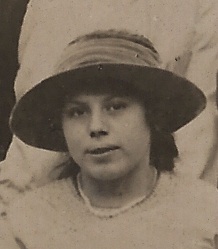 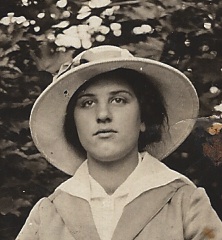 I also found the picture below….. 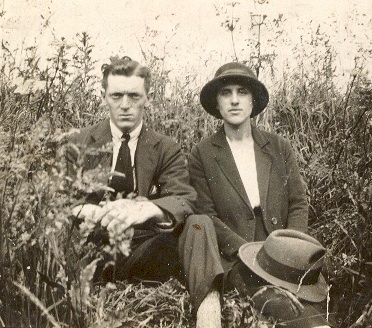 and thought she must be the girl on the left.

But wait – the back of the picture of the rather dour-faced couple reads:

Are Jack Hall and John Hall the same person? Could be. We’ve all heard of John Kennedy aka Jack. And I found a picture identified as Jack Hall that looks like he could be the man in the picture above – although the profile view makes it difficult to match.

So are these pictures of the same woman – Lizzie?

And if so – is she one of the girls in the wedding picture? 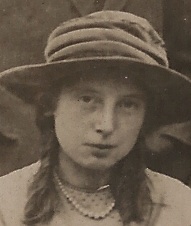 There is one more picture of Lizzie. The back of this picture names Jack, Lizzie, Nell and John. I’m pretty sure that’s John Elgey and his wife, Nellie, on the right. So that’s Lizzie in the middle and Jack on the left. Jack and Lizzie look like they could be the unhappy looking couple in the earlier picture. I’m so glad they are happy here! Maybe they are laughing about Lizzie’s house slippers. 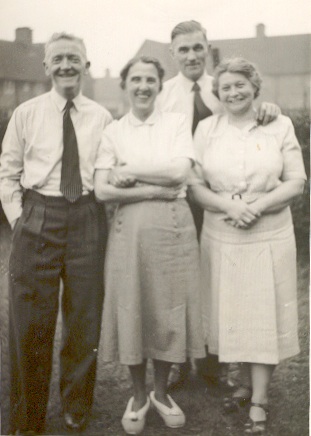 Could this be a progression of Lizzie as she aged?

Or is the woman in the middle not Lizzie? And if she is not Lizzie, then are John Hall and Jack Hall two different men?

And if all 3 of the pictures above are Lizzie – is she one of these girls?

Aunt Jennie mentions “cousin Ida” in her letter – but I have pictures identified as Ida and she doesn’t look like anyone in the wedding picture.  Jennie also mentions Hilda in the letter – whom I now know is Ida’s sister. Ida and Hilda are Jennie’s nieces.

Until I started typing this, I had never considered the possibility that Hilda might be in the picture – but a cousin could be in the wedding party. I must take a look….. Hilda would have been about 20 when the wedding occurred. Does she look like the girl on the right? (Hilda is pictured here on either side.) 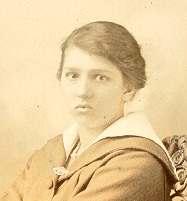 Here is what I think:

Jack Hall and John Hall are the same person.
Lizzie is in the 3 pictures – two identified as Lizzie and one identified as Mrs. John Hall.
Lizzie could be the girl on the left in the wedding picture. There seems to be enough resemblance in the shape of her face, nose, and eyes.
The girl on the right could be Hilda.

I don’t know if I will ever solve the question of the girls seated in the wedding picture unless I hear from a cousin somewhere who knows who they are, but I’d like to hear what you think!

There are five people left to identify in the wedding picture. Stay tuned.

If you’d like to catch up with who’s who, here are the links:
Isabella Lidmore
George Elgey
Ethel Elgey
John Elgey
Nellie – Mrs. John Elgey