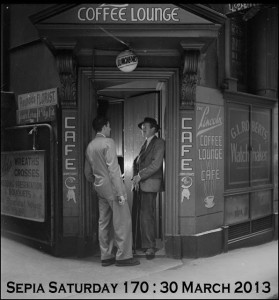 This week’s prompt of two men in the doorway of a Coffee Lounge reminded me of a photograph emailed to me by a cousin. Thanks Brian! 🙂 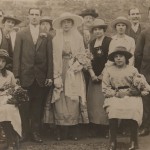 I’m using this photograph of two people standing by the door of a candy store to fit the prompt today. But more importantly, it is my last post about identifying the people in a photograph taken on the occasion of the marriage of George Elgey to Isabella Lidford.

I promise. The last one……. unless I hear from someone who can help identify some of these people. 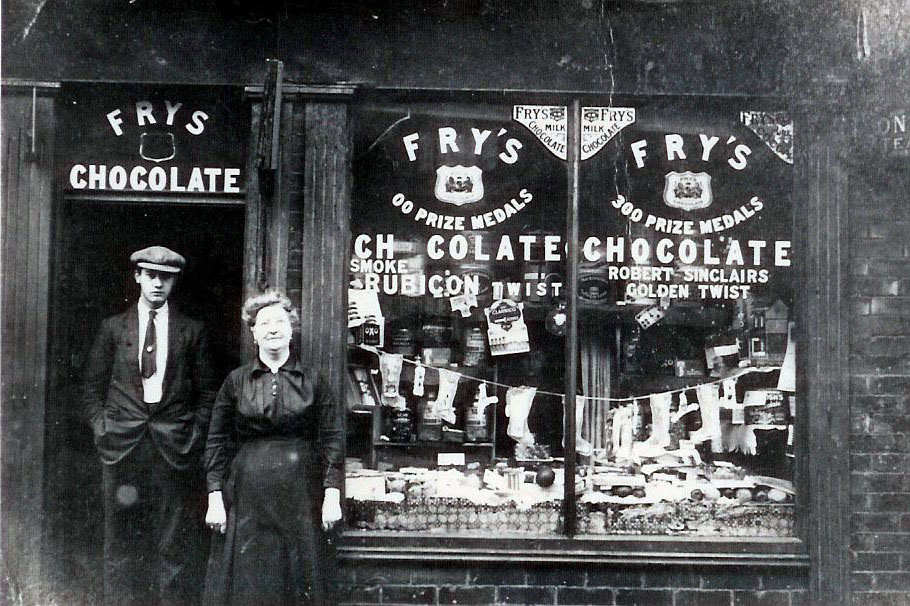 There is nothing to indicate a connection between the picture above and the wedding picture except that my cousin included it with other pictures that his grandmother had of relatives from England. 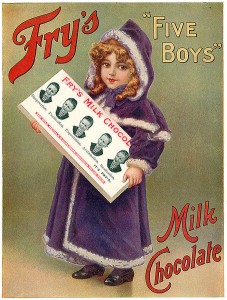 By the time the picture above was taken in 1922, Fry’s Chocolates had merged with Cadbury, forming the British Cocoa and Chocolate Company. When you bite into that Cadbury chocolate egg tomorrow, you have the Fry family to thank.

The photograph didn’t yield any clues and the back of it wasn’t much help either…. somebody’s mother and brother. 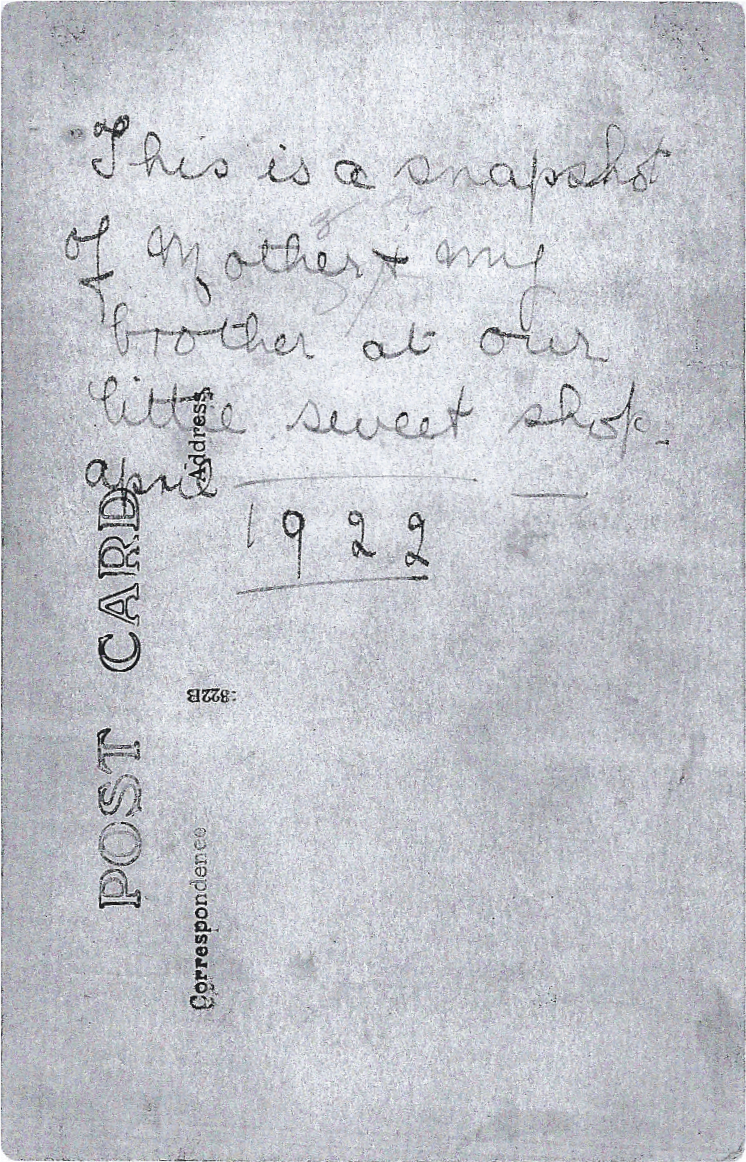 They look like the same woman to me! Eleanor Richardson Coates, mother of Jennie Coates Elgey (and grandmother of the groom), was not alive at the time of the wedding, so that eliminates the possibility that she is the woman above. My best guess is that she is the mother of the bride – pictured on the right above.

And then there is the young man in the photo of the sweet shop.

He resembles this young man in the wedding photo. Of course, in my last post I wondered if he was Edward Elgey. If the woman is the mother of the bride, then he could be the brother of the bride. 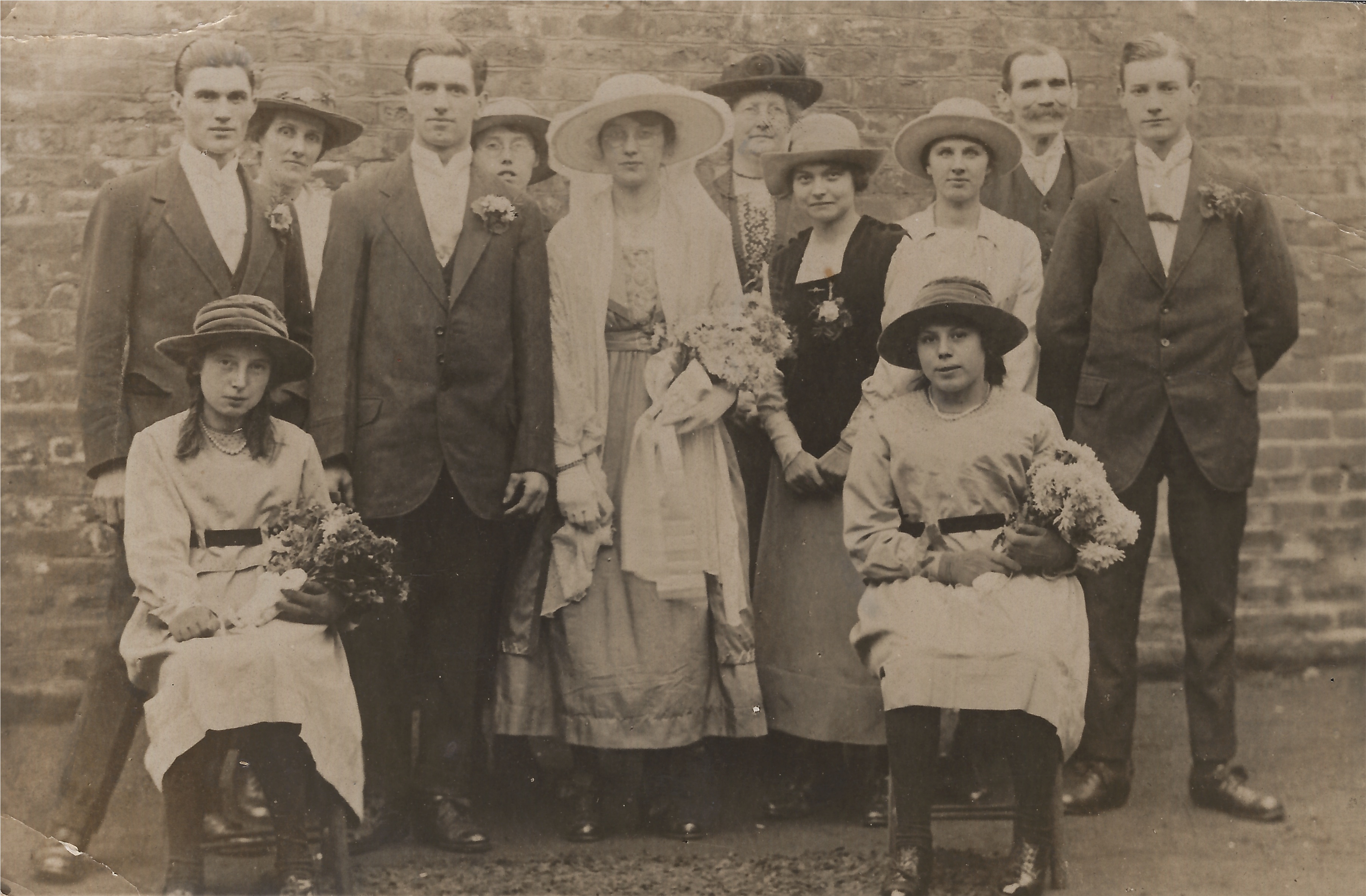 I’ve just begun research on the bride, Isabella Lidford, and I think I have found her in the 1911 Census. She is listed with parents Frederick John and Margaret Ann Lidford. The children are listed as:

Could the young woman in back be Isabella’s younger sister, Sarah? She would have been about 18 at the time of the wedding.

And could the young man on the right in the wedding photo (and the sweet shop) be Isabella’s younger brother Thomas? He would have been about 16 at the time of the wedding.

I also found a 1918 death record for a Frederick J Lidford in Houghton, Durham, England. If I have the right man and family, Isabella’s father died in 1918 at the age of 44, about two years before her marriage. This makes me think that the man with the mustache is Frederick Elgey, father of the groom. Of course, that is pure speculation.

I’ll sum up what I think I have learned about the people in the wedding photograph and then follow up with a couple of closeup views of the sweet shop picture. Here’s the wedding picture again to make it a little easier to follow:

The people I feel confident that I have identified:
The groom: George Elgey
The bride: Isabella Lidford
Man on the left: John Elgey – brother of the groom
Woman in white standing on right side: Ethel Elgey – sister of the groom
Woman standing in back behind John and George: Jennie Coates Elgey – groom’s mother
Woman in black standing between the bride and Ethel: Nellie – wife of John Elgey

I’m less confident, but think my guess is a strong possibility:
Seated on left: Lizzie Elgey – sister of the groom

Pure speculation, but reasonable guesses:
Man with mustache: Frederick Elgey – father of groom
Girl in back between older women: Sarah Lidford – sister of the bride
Seated on right: maybe, possibly, could be Hilda Dawson – cousin of groom

That’s what I think, anyway. I’d love to hear what you think!

Here’s a closer look at the sweet shop, just for fun. 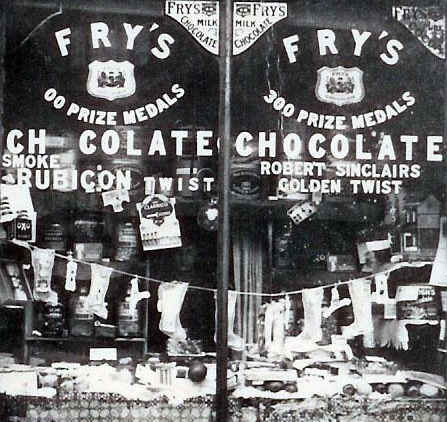 Do you think those are filled Christmas stockings in the window?

Enjoy a cup of coffee or tea, or perhaps more chocolate with the other’s who are participating in Sepia Saturday.