In a recent post, I shared my interest in the Civil Rights Summit held at the LBJ Library in Austin, Texas, April 8-10, 2014. Curious to see if I could uncover any family stories related to the Civil Rights movement, I sent out a mass email. I received only one response – from Dee Webber McLean stating that her father, Fred M. Webber, participated in the 1963 March on Washington. (Fred M. Webber was my Grandmother Abbie’s brother.) I sent a quick reply with a list of questions, but Dee didn’t have any additional information and suggested I contact her sister Bea.

I received this reply from cousin Bea in response to my queries:

I can’t tell you very much. I was 20 and ignored half of what was said at the dinner table. See below in red.

How did he make the decision to attend? No idea. He was involved in civil rights in Baltimore (and I am sure well before Baltimore), so I am sure it was a no brainer for him.

> Did he speak about civil rights from the pulpit? As Dee told you, he did not have a church at the time, though he did substitute at churches all over the Presbytery, preaching most Sundays. I would say he probably did. (At the time he was living in Baltimore serving as the General Presbyter, an executive, so he didn’t have a church.)

> I don’t know your family history well enough – was the family in New York at the time? At what church was he pastor? See above.

> How did he travel to D.C.? Did he go with a group? I would suspect it was with a group and probably by bus.

> What did he say about the experience? Sorry, I have no memories.

> Are there any photos or other memorabilia from the march? Not sure, but will keep an eye out when and if I am in family stuff. See Xmas letter attached; that’s actually how I know he was there.

> Was there any push back from the community because of his participation? Again, as he was not the pastor of a church, he did not have a local community, but rather the entire Presbytery of Baltimore and I am sure there were many who disapproved.

I do know he was very involved in the ecumenical movement, and participated in the council of churches or whatever its name was. I am sure this is something he did throughout his entire ministry. I do recall there were some meetings at our house in Catonsville attended by some Black clergy and a Catholic priest, Father Joe Connolly, I think was his name. In the Fred M. Webber historical document attached, keep scrolling through it and you will see some stuff from when he went to Rome representing the United Presbyterian Church of the USA and the Protestant Churches of America at the elevation of Archbishop Sheehan to Cardinal. This was, I know, one of the highlights of Daddy’s life and service in  ministry. I’ve attached some other stuff that I happen to have in my computer. I also have a booklet of memories about Daddy that the family presented to Mother in 1995. If you’d like it, let me know.

Of course, I said I would like to receive the booklet of memories!

And here is that one sentence from Carol and Fred Webber’s 1963 Christmas letter that tells family and friends that Fred participated in the March on Washington:

*****
I’ve mentioned before that I am still suffering the effects of “chemo brain” – affecting my abilities to plan and organize and follow through. I’ve followed the trail of some of the crumbs above and I am excited to share them. Normally, I would be coming up with a plan on how to weave what I found into some kind of narrative. It just isn’t happening. So – although I probably won’t be entirely pleased with the results, I’m just going to dive in and do my best with what I have. Maybe something simple… like chronological order? If I keep challenging this brain, maybe it will overcome the effects of those toxic drugs more quickly. Bye-bye, perfectionism!

BTW, a friend sent me an interesting article about chemo brain last week. I knew some of the information, but was not aware of the link between chemo brain and a family history of Alzheimer’s (I’ve got that) nor the association with also having peripheral neuropathy (yup – I’ve got that too. Fortunately not as bad as some people get from chemotherapy.).

I don’t automatically send my blog posts to Facebook, but more people in my family are likely to read my Facebook status than read my blog. So if I want certain cousins to know I’ve posted about a common ancestor or relative or if I’m hoping they will chime in with more information, I link the blog post on my Facebook page. And sometimes it does get a conversation going.

Last week, I linked my blog post The Civil Rights Summit and a Family Story? to my Facebook page and tagged cousins whom I hoped would read it and maybe even add more to the story I’m trying to research. I know at least one cousin came here and read the post because she left a comment. I’m not sure about the others, but the photograph thumbnail that showed on Facebook did spark some conversation. 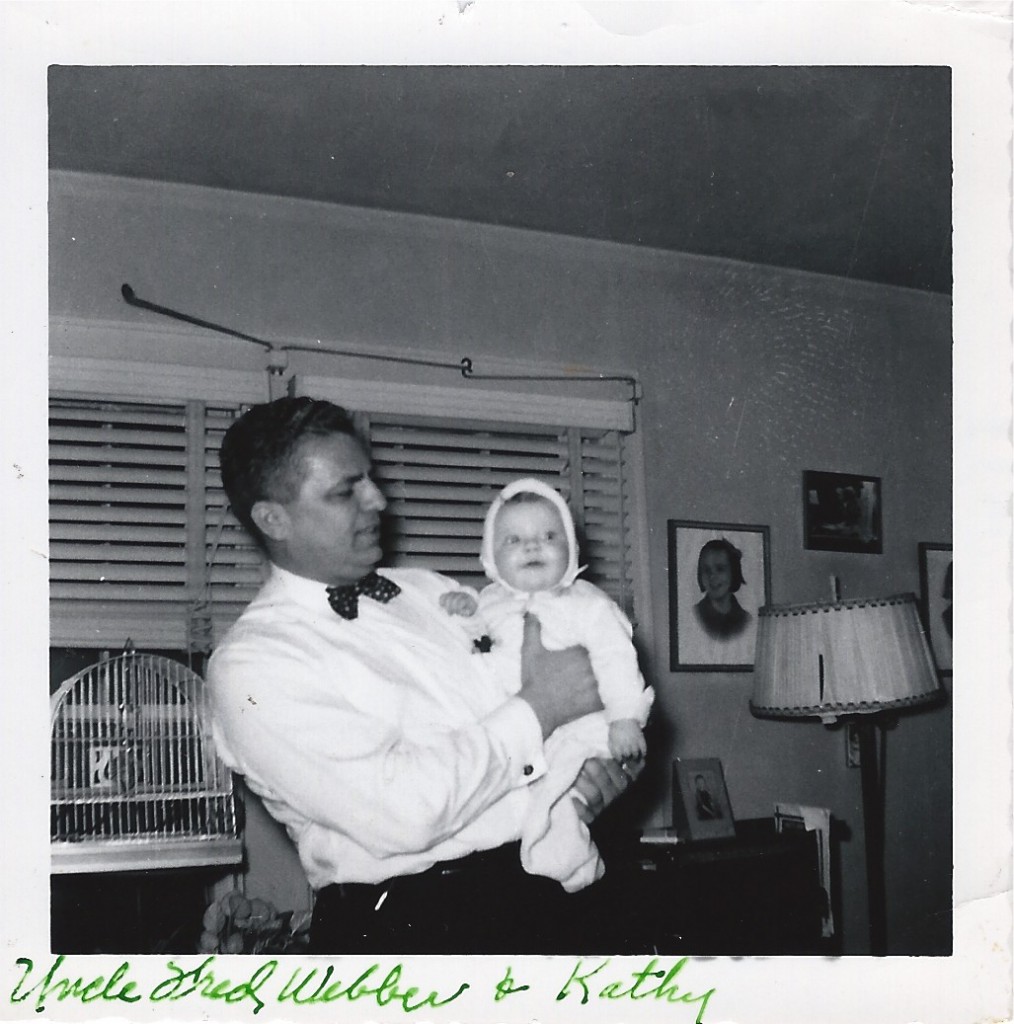 And here’s the conversation:

Sue: I love seeing this picture of you and Fred. And the picture on the wall of Dorinda and the other picture, mostly out of sight, of Wilda.
Kathy: Like being back in the house on H Street…
Bea: Love Daddy’s bow tie!
Yvonne: All of the above and the cage with “Pretty Bird” !!!
Yvonne: Kathy, was this 1954?
Kathy: I have a few other pictures taken that day and none are dated. Must be early 1954. Mid Oct. birthday + still wearing hat and sweater.
Yvonne: Of course, in Iowa you might need that hat and sweater in May! I too was figuring from your birthday.
Kathy: True! Especially this year! I’m guessing I was maybe 5 months old?
Yvonne: And I was just turning 11 and was always excited about relatives coming from out of town.
Wilda: This is off topic, but I love this photo for more reasons than one (or two). I see Dorinda Rupe as a child (my photo got cut off) but also the bird. I had forgotten about the bird. Was it Zam’s or Aunt Lottie’s? I sort of think it came at the same time as Pedro, and Pedro was, I believe, Aunt Lottie’s dog. I’m trying to remember the name of the canary. I have a name in my head for it, but am not confident I’m right.
Yvonne: I love it for many reasons, too, Wilda. Read through the preceding messages. I think the bird was Grammy’s and that she called it “Pretty Bird.”
Wilda: I think you are right – “Pretty Bird.”

In the course of this little Facebook conversation, we set an approximate date for the photograph, identified pictures of people on the wall in the background, confirmed the location of the picture, identified the name and species of the bird that lived in the cage, confirmed Yvonne’s age and feelings, and identified the name of a dog that lived at the house at the time and the possible owner.
This is not the first time that a picture or post has yielded family stories. And I may never find those comments on Facebook again. Have you ever tried to find an old post on Facebook? It ain’t easy!
So this time I came up with a plan to save this information. I copied it from Facebook and added it to the comments on the linked blog post, using first names only.
What do you think of this as a way to preserve the information?
Should I add tags to the post that reflect the information in the comments so I can find it easily when I want it?
What about conversations sparked by a photo on Facebook when there is no linked blog post?
Do you save family stories from Facebook posts and comments? What is your preferred method?
*** The formatting changed somehow in the middle of this post and I can’t get any paragraphs/spaces where I want them in the last half.  And yet I was granted spaces here? Annoying!