walked into the Mandell and Ballow deli in Baltimore on February 7, 1962.

But they didn’t walk into Miller Bros. restaurant that day.

The group also included Dr. Furman Templeton, director of the Urban League in Baltimore – an African-American. They were refused entrance to the segregated restaurant.

After learning that my great uncle Fred M. Webber had participated in the 1963 March on Washington, I immediately started searching the internet to see what else I could find. I was excited by a link to Google Books.

The link took me to page 56 of Glimpses of Jewish Baltimore by Gilbert Sandler. Curious, I thought, since Fred wasn’t Jewish, but there was Fred M. Webber’s name on the first page of the chapter titled “Demonstrators: Baltimore Rabbis Confront Segregation.” And scrolling down to page 57 was a picture of Fred M. Webber! (The picture immediately below is the one referenced in the book, but does not appear in the book.) 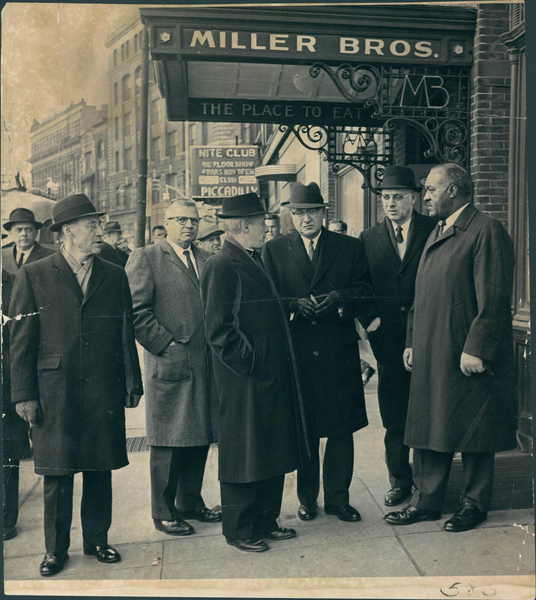 Clergy standing outside Miller Brothers Restaurant after being refused entrance

The chapter begins:  “Awakening on the morning of February 8, 1962, the Jews of Baltimore were stunned to see in their morning newspaper, a two-column picture that, for the Baltimore Jewish community, would close one era and open another. The picture would please some, disturb others and become the talk of the synagogue circuit.

In the weeks preceding the clergy protest, several restaurants in Baltimore had been picketed by biracial groups of college students who had previously been refused service. As reported in the Baltimore Sun newspaper, the clergy randomly selected two restaurants known to be segregated and called to inform them that they were coming – to give the restaurants “every advantage.” The clergy also notified the press. The protest was timed to coincide with the opening of the Maryland General Assembly, which was to consider public accommodations legislation that would desegregate all restaurants and hotels.

I’m sure I read another source (but I can’t find it now!) that said that the clergy wanted to pay a visit to one Jewish restaurant as part of their protest. Mandell and Ballow fit the bill.

Shortly before the clergy protest in early February, Mandell and Ballow deli had experienced an embarrassing incident in which a “group of Israeli sailors, all originally of Yemenite extraction, had gone to the deli and been denied service because of their dark skin.” Once the manager learned the men were foreign Jews, they received apologies and were seated. (3)

Following the incident with the dark-skinned sailors, the deli was picketed by a youthful labor Zionist group and, the following week, the Baltimore Board of Rabbis urged Jews not to patronize restaurants that discriminated.

I’m guessing the deli management didn’t want any more bad publicity the day Fred Webber and his clergy colleagues showed up for lunch.

While researching this, I found a wonderful website with many personal stories told by civil rights activists in the south. Rosalyn Garfeld Lang picketed Mandell and Ballow and shared this and other stories. Check out http://crmvet.org/.

To view a photo of the clergy standing outside Mandell and Ballow deli that day, search for Glimpses of Jewish Baltimore and include Fred M. Webber in your search terms.