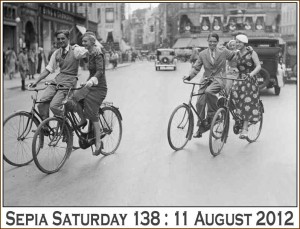 I wonder how far these couples succeeded in riding arm-in-arm and in heels and a rather tight skirt?

This prompt provides me the perfect opportunity to share a couple of mystery pictures that were among my grandmother’s photographs. My “couple” are a girl and a dog. 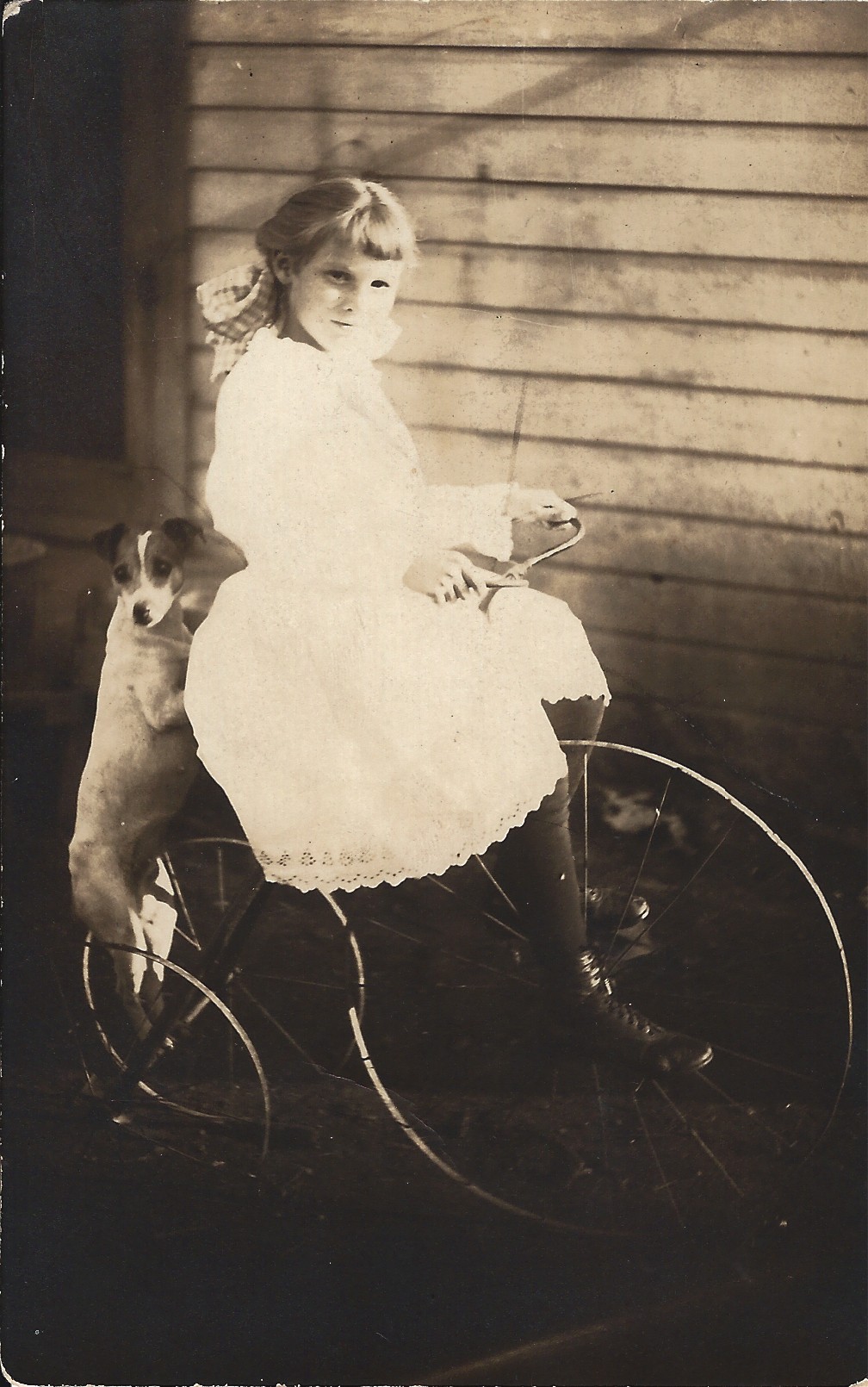 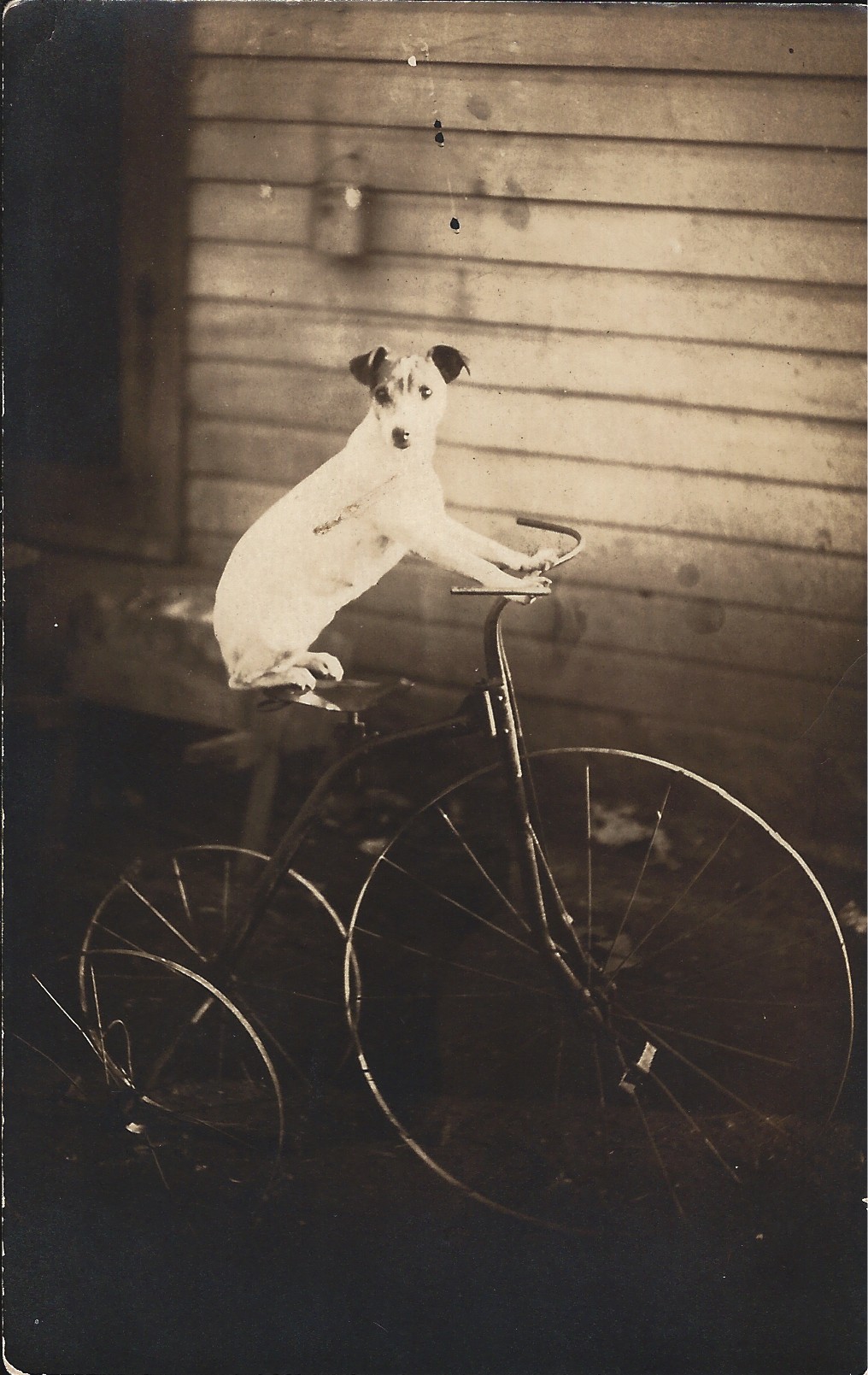 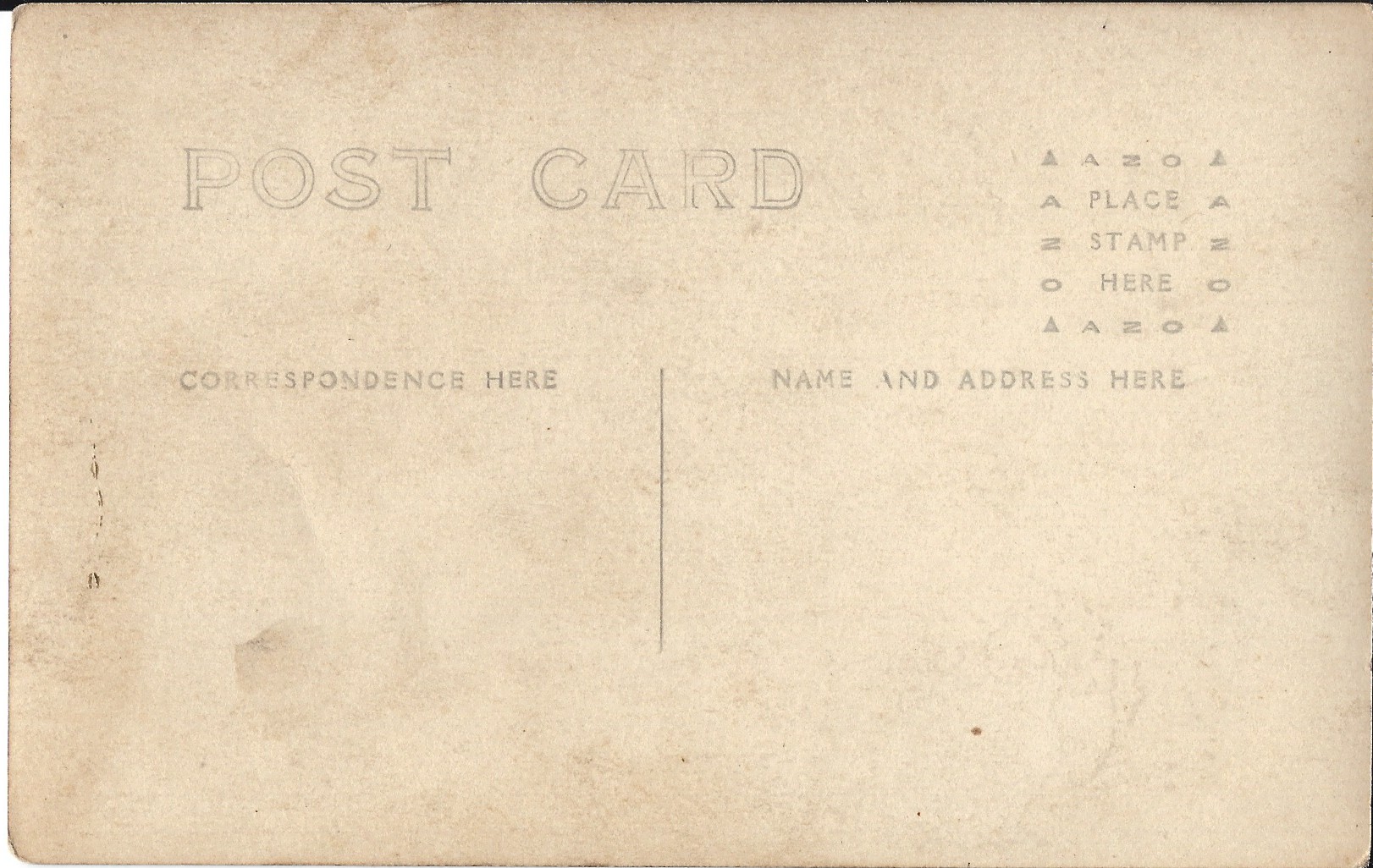 I have no clue as to the identity of this little girl or the dog. My suspicion is that these pictures were sent to my grandmother by her English relatives. My grandmother, Eveline Coates Hoskins, corresponded with several of her cousins and her aunts who lived in Durham, England in the early to mid 1900s. They often included photographs and postcards with their letters to her. The surnames of those she corresponded with are Coates, Elgey, Hall, and Dawson.

I don’t know enough about postcards to know if the back of the postcard provides a clue as to its origin. Help, anyone?

Another possibility is that it is some family member in the U.S., or a neighbor. In either case, the location would likely be Mystic, Iowa or somewhere nearby. Our family names in Mystic, Iowa are Coates and Hoskins.

In any case, the dog looks like he has done this before.

You can find more lovely photos by following the link to the Sepia Saturday Blog.

I think I’ll let Eveline introduce herself. The following is a transcription of a school assignment written by Eveline when she was 16. The paper is not dated, but it would have been written in 1916-17. My sister Kim and I transcribed this in 2007. 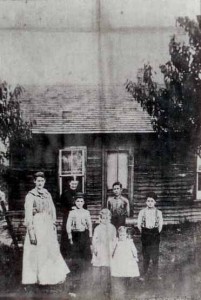 Sixteen years ago in the cold and blustery month of February I was born. The house in which I was born was located in what had been only a few years ago a perfect wilderness and where all kinds of mischief was carried on. This part of the town still retains its reputation for meaness, although it is in most respects as good as another part.

I am told that as I was the only girl in the family at that time, my brothers had all their friends in to see me, perhaps that is the reason why they stay at such a distance now. 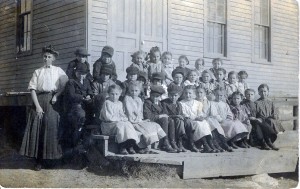 At the age of five I commenced my school career at the East Ward School. My first year, I was sick most of the time and only for the extra help which my teacher gave me I might have remained there another year. One or two incidents which happened there I can easily remember.

I always took my dinner during the winter months as my mother was afraid for me to be out in the snow. As it happened the children were all out sleigh riding and I could not find a sleigh for my own use, so as the only thing handy was my dinner pail, I immediately tried to make use of that. My mother could not guess what had happened to the pail and I never told tales out of school. 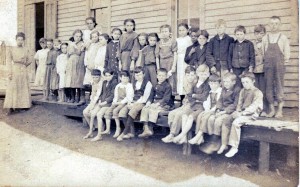 Not long after this I got into my second trouble. The girl I sat with was always trying to pull off some joke, so this day she left the cork out of her ink bottle and when I went to get a book from my desk, out came the ink. I don’t remember what I said or did but I do remember that it was the first time I ever had to stand in a corner. You can imagine what was the next act.

After spending four years of delightful work and play here, I started on my way to the Central Ward.  The children there were strangers to me and there were so many that for some time I was afraid to try any pranks and when I got over this feeling, I was told that I was old enough to act like a lady. Well I did, for it wasn’t but a few days later, when with some of the other girls I found myself in a big quarrel with some colored girls. That afternoon the professor for some reason or other kept coming into the room and it was with a sigh of relief that we marched out of school that night without even a scolding.

In the eighth year of school we entered a contest for the Lincoln bust and won, but we had a great many more tongue fights before the other side admitted their defeat. 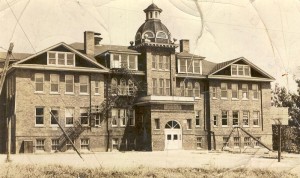 Then came our entrance into High School, and the day of the first fire alarm we were the last out, and our defeated friends very politely told us that “we were too green to burn”. We thanked them for the compliment as green things means growing things.

Then came the fight for the new school house and a half term of school in the U. B Church. This didn’t benefit any of us as we did as much talking and so forth, as ever.  But in the new building a perfect rule of tyranny began. For no talking is allowed after you enter the building until you leave again.  Of course we obey this rule in every respect, even keeping still during recitation.

One of my friends is talking of building an asylum for old maids, and I think I will try to be one of its first inmates.  If she doesn’t exclude all communication with the boys.

This is the story of my life past, present, and future as I know it, what happens beyond the grave I cannot tell and wouldn’t if I could.

The teacher wrote “Well done Eveline” across the first page.

My grandmother sounds like a typical teenager. A little boy crazy. A little impertinent. Not always able to hold her tongue. It’s kind of funny what one decides to focus on when writing an autobiography. Eveline focused on school and those incidents that stood out in her memory – mostly times when she got into trouble. I never pictured  my grandmother as much of a troublemaker (and the seriousness of her misdemeanors confirms that view), but she wasn’t one to sit silently on the sidelines either.

I received the picture at the top of the page from a cousin I found while going through some of Eveline’s papers. Brian Schneden is a grandson of Eveline’s sister, Blanche. He said that this picture is printed on a pillowcase and hung in Blanche’s house for many years. In the picture are Eveline’s mother, Mary Ann Harris Coates (on the left), and Mary Ann’s mother, Celia Jenkins Harris (in the back). Eveline’s older brothers are Carl, John and Joseph Jr. If height = age, then Joe is on the left, Carl in the middle, and John on the right. The taller girl is Eveline; the smaller girl in front is Blanche. Blanche was born in 1903 and I’d say she looks about 3 in this picture, so I’m dating it as circa 1906.

Eveline doesn’t mention that she is not the first girl born to her parents, only that she was “the only girl in the family at that time.” A girl, Amelia, was born two years before Eveline, but she only lived one year. Eveline had 3 sisters and 5 brothers when this was written. 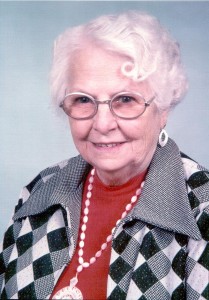 My grandmothers, Abbie Webber Smith Brender and Eveline Coates Hoskins, were the inspiration for that childhood ambition. I was blessed to spend most of my early years in daily contact with one or the other of them.

I followed my grandmothers around as they went about their daily tasks and they included me. I wasn’t too little. I wasn’t in the way. (Well, I might have been too little and in the way, but they never said so and never made me feel as though I was.) Eveline called me her “little buddy.” They shared their work with me. They shared their hobbies and interests with me. They played with me – each in her own way. They had soft arms to just sit and cuddle with me. 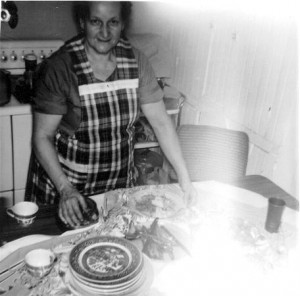 I moved away from my grandmothers before my 8th birthday. I missed them terribly. What had been daily or weekly time with them turned into yearly visits. Not only did I miss the personal time with my grandmothers (and grandfathers and a lot of other family!), I also missed those Sunday dinners around Grandma’s table – the place where family stories are told and retold.

Alas, I am not (yet?) a Grandmother. In the meantime, I’ll be working on our family history and collecting as many stories as I can.