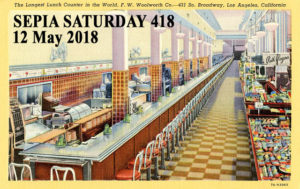 The Sepia Saturday theme image this week features an illustration of the longest lunch counter in the world, which was in the F W Woolworth store in Los Angeles.

The image brings back a memory from my childhood which I wish was as vivid as this illustration, but instead is a bit vague. I was not blessed with the best memory. 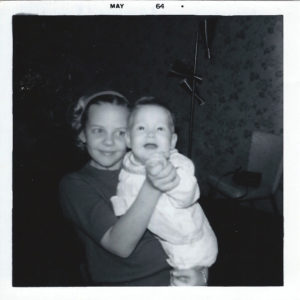 Dancing with my baby sister Dec. 1963

The little snippet of my life that this brings to mind occurred in Great Bend, Kansas. I’m placing it in the fall of 1963 or spring of 1964. I would have been 11 years old.

I went shopping without a parent – or anyone, as I recall it. My mission to was purchase a 45 rpm record and I was excited about going without supervision.

I successfully completed my transaction and decided to feel my independent oats and treat myself to something at the lunch counter in the dime store. Maybe it was a Woolworths. I don’t remember.

When I sat down I noticed a little shelf under the counter where you could put your belongings, so I stashed my purchase there. I proceeded to get lost in ice cream or thoughts or sights or sounds, finished whatever I was eating, and left…

…without the bag containing the first-time-I-ever-went-shopping-by-myself-record!

When I realized what I had done, I hurried back to the store and searched the shelf under the lunch counter, but the flat paper bag containing my newly purchased favorite hit song was not there. Angry at myself, sad, and dejected, I walked home empty-handed.

I don’t remember what record I lost that day. I think it was something by the Beach Boys.

I do know what I bought the next time I went shopping as a wiser-from-experience-girl: Sugar Shack, recorded by Jimmy Gilmer and the Fireballs. Sugar Shack was in the top 10 on the Billboard Hot 100 list for 10 weeks in 1963, beginning the week of October 5th, and hit the #1 spot on October 12th.

This makes me wonder if I was shopping with birthday money, as my birthday is in October. I’m pretty sure I went back to the lunch counter after making my purchase – just to prove that I had learned my lesson.

I liked to imagine that little coffee shop made out of wood and its mighty good expresso coffee. It all sounded hip and romantic. I can still sing along without missing a word.

Sugar Shack earned a gold record and Billboard ranked it as the No. 1 song for 1963. Jimmy Gilmer and the Fireballs recorded it at the Norman Petty Studio in Clovis, New Mexico. I’m not much of a music historian, so why does this matter to me? Well, our family’s third residence after leaving Great Bend was in … Clovis, NM. I had just graduated from high school two weeks before our move to Clovis, so I only spent a couple of summers there before and during college. I didn’t learn about Clovis’s musical fame. I never heard of Norman Petty or his studio. Buddy Holly, Roy Orbison, and many others recorded at the same studio. Norman Petty was kind of a big deal, I’ve now learned.

That unique organ riff in Sugar Shack was played on a 1940s Hammond Solovox organ – added by Norman Petty after the recording session had ended and Jimmy Gilmer and the Fireballs had left the studio.

In addition to adding that extra special something that could push your rock and roll recording to the top of the charts, the Solovox organ could bring your family back to your long neglected piano.

Or perk up your party!

I wish I’d known about Norman Petty and his connection to Sugar Shack when I lived in Clovis. I would surely have paid the studio a visit. At least I can take a tour of the studio and the Rock & Roll Museum in Clovis via the internet and get a glimpse of the Solovox too.

An image of Norman Petty (seated at a counter) and an audio interview of him.

Have a seat at the lunch counter and see what others have served up today at Sepia Saturday.

I like to collect sheet music of songs I remember from my childhood. I got this one about a month ago from my daughter, who has started a small business selling vintage items. Dorothy McGuire of the McGuire Sisters passed away on Friday, September 7, 2012, at the age of 84. I believe that’s Dorothy at the top. Please correct me if I have that wrong.

I don’t have any specific memories connected to this song, except that I know I went around singing it as a little girl. I’m sure I heard it on the radio and on TV, as the McGuire Sisters made many television appearances. So many of the songs during the early 1950s had tunes and words that felt happy to my young ears. I still remember the tune and most of the words.

You can read more about Dorothy McGuire here. And listen to the McGuire Sisters sing Sugartime, a song that earned them one of six gold records: