A few months ago I found a series of video tutorials by Ben Sayer at Genealogy Tools explaining his system for computer genealogy files. He put this series together in 2008, but they were new to me. I set up a few folders in this format and went on to something else. This week I’ve been back at it again. So far I really like this system and as I get the folders set up, I now have a designated place to put all my genealogy research and documents.

… because my filing system is a mess and there have been many times when I knew I had some thing some where, but I didn’t know where. What in the world did I name that file? 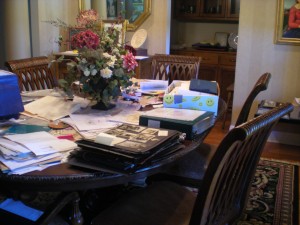 Unfortunately, this does not address my unorganized mess of physical files, folders, boxes, tabletops, closets, and desks. 🙁

The basic idea is to create a master folder for your family history. I created one for my family, one for my husband’s family, and one for my step-father’s family.

Within the family history master folder, create two folders: Surnames and Places. Within the Surnames folder, make a folder for each surname. Then within each surname, create folders for individuals.

and it addresses married/maiden names.

It makes sense to me.

These videos do not suggest creating folders within the individual person folders, but I am doing that for some people. I have a lot of artifacts/memorabilia from my grandmothers, so I have made an Artifacts folder for each of them within their individual folders. In fact, I have so many that within the Artifact folders, I have made folders for Recipes and Newspaper clippings and I may decide to add more. I have a lot of one grandmother’s jewelry, for example, so I’ll make a Jewelry folder and add all the pictures I have taken.

The other thing I learned from these videos is how to make alias files. What a concept! A document – say a census record – may be in the individual file for the head of a household. I can create alias files for the other members of the family that show in their individual folders, but they aren’t really duplicated so don’t take up any additional space on my hard drive. Who knew? Not me!

And alias folders are great for married women. She can have a folder included under her husband’s surname as well as her own.

I haven’t done much with the Places folders yet other than set up some of them. I still need to decide how I want to use them. Maps, obviously; pictures of homes; descriptions of towns; …. I also like his suggestion of using alias files for places where the name has changed over time. 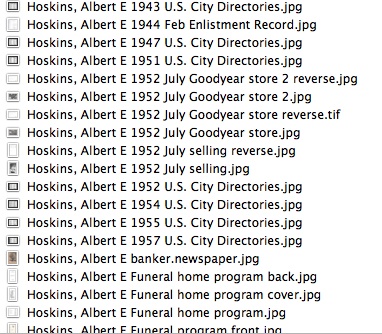 You may notice that I took a shortcut within his individual folder and did not use his full name or the years of his life. Since they were already in his folder, I thought it would be ok.

These tutorials are for Mac users, but the filing system itself makes sense for anyone. The explanations are for beginners, so you may already know everything. I did not.

Here is the link to the first video. Links to subsequent videos are at the bottom of the linked post. The comments section of the posts have additional information about his system not addressed in the videos. (Where I have just now read that he puts census records into the Places folders and creates alias files for individual folders; he addresses what he does with photographs; and more.)

Do you have an organizational system that works for you? Please share in the comments.