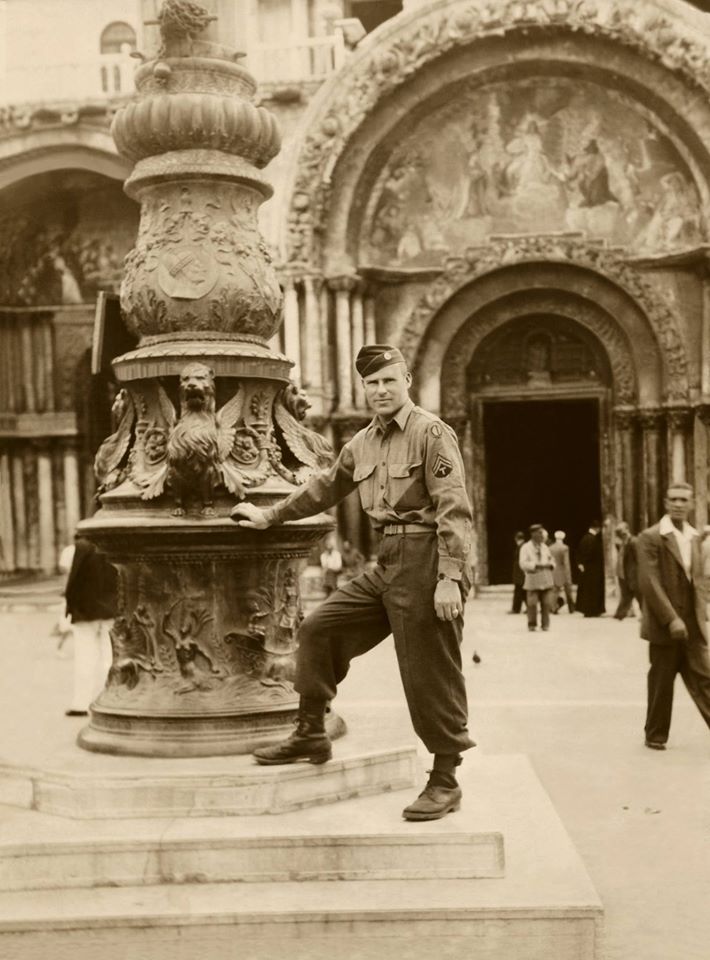 My cousin posted this wonderful picture of her dad, Orville Kessler, on Facebook this week. I had never seen it before and knew it was what I wanted to post today.

We don’t have a comprehensive understanding of my great-uncle Orville’s military service (yet!), but have pieced together the following:

Orville Kessler was inducted into the Army 21 May 1942 at Ft. Des Moines, Iowa and discharged 29 December 1945 at Ft. Leavenworth, Kansas. He served as a cook in the 310th Medical Battalion attached to the 85th Infantry Division.

* Orville signed up as a non-combatant because of his deeply held Christian conviction that it would be wrong to kill anyone.
* He talked very little about his experiences in the service.
* The picture of him standing by the fountain in Italy was found folded in a book after his death. None of his family had seen it before.
* Under battles and campaigns his discharge papers list Rome Arno (22 January 1944 – 9 September 1944), Northern Apennines (10 September 1944 – 4 April 1945), and Po Valley (5 April 1945 – 8 May 1945) – all in Italy.
* He was either in The Philippines or at the Suez Canal on his way to the Pacific Theater when the war ended. (More research needed!) 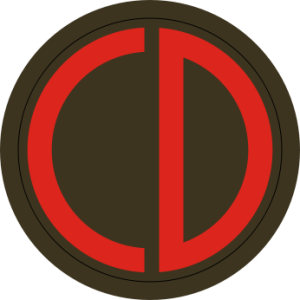 The 85th Army Division was known as the “Custer Division” and, although hard to see in the photograph, it looks like Orville has the Custer Division insignia on the sleeve of his shirt. 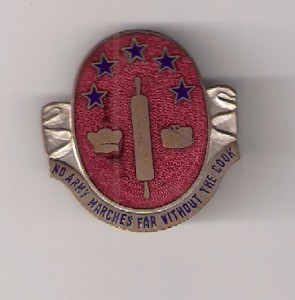 I don’t see a pin on his uniform, but the motto on this WWII Cooks and Bakers pin is certainly true: No Army Marches Far Without The Cook.

As I said, we don’t have a lot of information about his service, but from the little research I did today, I picked up a few clues as to some of what he may have experienced.

He probably attended an Army School for Cooks and Bakers. It would be interesting to know where he received his training. His family says that Orville was very good at baking pies and cookies and an expert at oatmeal. The plaque at right, from the Fort George Meade Museum in Maryland, gives a brief glimpse into the typical curriculum.

I found a short autobiography titled “A Cook’s Experiences in World War II,” written by Joseph A. “Buck” Craton, who was a cook in the U.S. 3rd Army, 65th Infantry Division, 869th Field Artillery Battalion, Headquarters Battery. We may not think of a cook as having much engagement in “warring,” but part of his story, which takes place in Germany, shows that we would be wrong in making that assumption:

This section is about me shooting down a plane. I’ll begin by describing how we operated in a large city. Our battalion consisted of headquarters (which I was in), four batteries of artillery, and one battery of anti-aircraft. Headquarters and anti-aircraft set up in the center of town, then each of the others set up on the corners. Our mess truck was equipped with a revolving 50 cal. machine gun mounted in the roof of the cab. If enemy planes attacked, no one would fire until they were in the circle of fire. One particular day I was alone with the mess truck and was serving coffee to our sergeant major. No one else was around. Suddenly there was a squadron of M.E. 109s overhead. Well, when all our batteries opened up they were so busy trying to get out of the circle of fire, I don’t remember their firing a shot. It was at this point the sergeant major told me to use our gun. I always liked to fire those things, so I jumped in the truck and picked out a target. When you fired a large machine gun you could see the tracers and know exactly how you were doing. No one else was firing at my plane. The sergeant yelled to me, “Lead it a little more.” You could see the tracers going into the tail of the plane. I took his advice and, lo, I got him! Smoke started streaming from the plane, and suddenly I got this feeling in the pit of my stomach. I thought, “God! I have just killed a man!” But suddenly I saw the canopy fly off and I saw a parachute open and I felt good again.

And one more story from a cook serving in the 85th Mountain Infantry Regiment in the Apennines (yes – we think Orville was there) – as told by and about Cpl. John Stone:

Stone was one of about a dozen cooks in the 85th Mountain Infantry Regiment who could set up a hasty field kitchen and, within 30 minutes, serve hundreds of Soldiers in feeding lines.

The cooks ensured Soldiers had their rations for the frontlines as the division forged ahead in the Apennines. Stone said the kitchen crew, which typically set up more than five miles back, dug a hole in the ground for a field oven and then stacked sandbags around it for the stoves.

“The meals were good, hearty, meat-and-potatoes type of meals with any vegetables that were available,” he said.

Stone said U.S. units often fed the Italians fighting on the Allied side. In turn, the partisans shared their spaghetti, pizza and lasagna, and U.S. Soldiers got to enjoy a taste of the surrounding countryside.

Stone, who got to stay in the mountain village homes of a few of the families, said the partisans were simple people, just like him, wanting to protect their families, their land and their way of life.

After major battles at Riva Ridge, Mount Belvedere and Mount Gorgolesco, Soldiers returned to base camp for food and much-needed rest.

“It was good to cook the Soldiers what they liked,” Stone said. “War’s a tough row to hoe. People who love each other and take care of each other help make it a great outfit.”

The division broke out of the mountains in April 1945. On the way to Po Valley and Lake Garda, Stone and his comrades marched through many booby-trapped areas. Bombs detonated in trees, under the snow and behind rocks.

The 85th Infantry Division saw a lot of combat, and as a part of the Medical Battalion, I am sure there were many sights and sounds that Uncle Orville may have been loathe to remember. I hope this post provides some insight as to what Orville’s military service may have been like and I look forward to our family doing additional research.

A photo gallery related to medical units in WWII.